It's powerful and relatively cheaper but rips off an already dated design.
C. Low|01.29.19
@cherlynnlow

Huawei's MateBook series of laptops seriously impressed last year. The MateBook X and X Pro were surprisingly popular among tech journalists, offering powerful performance, gorgeous displays and comfortable keyboards squeezed into MacBook-like frames. The company is looking to follow that success with the new MateBook 13, by offering similar quality at a slightly cheaper price. The MateBook 13 is a strong, well-rounded laptop, but that lower cost comes with some tradeoffs.

For example, compared to the likes of the Surface Laptop 2 and its own sibling the MateBook X, the latest Huawei laptop feels chunky. You'll also immediately notice its weight -- at 2.82 pounds, it's heavier than you'd expect from something so small. It's also heavier than the latest MacBook Air, which comes in at 2.75 pounds.

There isn't much else to say about the MateBook 13's looks except that it is, once again, a MacBook clone. Cover the Huawei logo on the lid with an Apple sticker, and it's virtually indistinguishable. When there are companies like Microsoft and HP making waves with unique and beautifully designed laptops, it's hard to keep forgiving Huawei for continuing to rip off Apple's design. (Which, by the way, is growing a little stale itself.)

I was also a little let down by the screen. Don't get me wrong -- it's a serviceable display with relatively narrow bezels that delivers rich color and plenty of detail. But, at just 300 nits, it's too dim to use outdoors or under bright lights.

And, if you do step outside, I recommend you get some headphones. Although the MateBook 13's speakers pushed out full, crisp audio that didn't sound tinny even at top volume, I did wish it got louder and its bass was stronger. It was drowned out by my TV playing in my living room, so I couldn't fully enjoy Taylor Swift belting out New Romantics on the laptop.

It's not all downgrades, though. Unlike the MateBook X Pro, which hides its webcam under the keyboard, the MateBook 13's camera is tucked into the bezel above the screen. Thank God because that awkward camera placement below the display made video conferencing super painful since it left people either staring up my nose or at my chest. 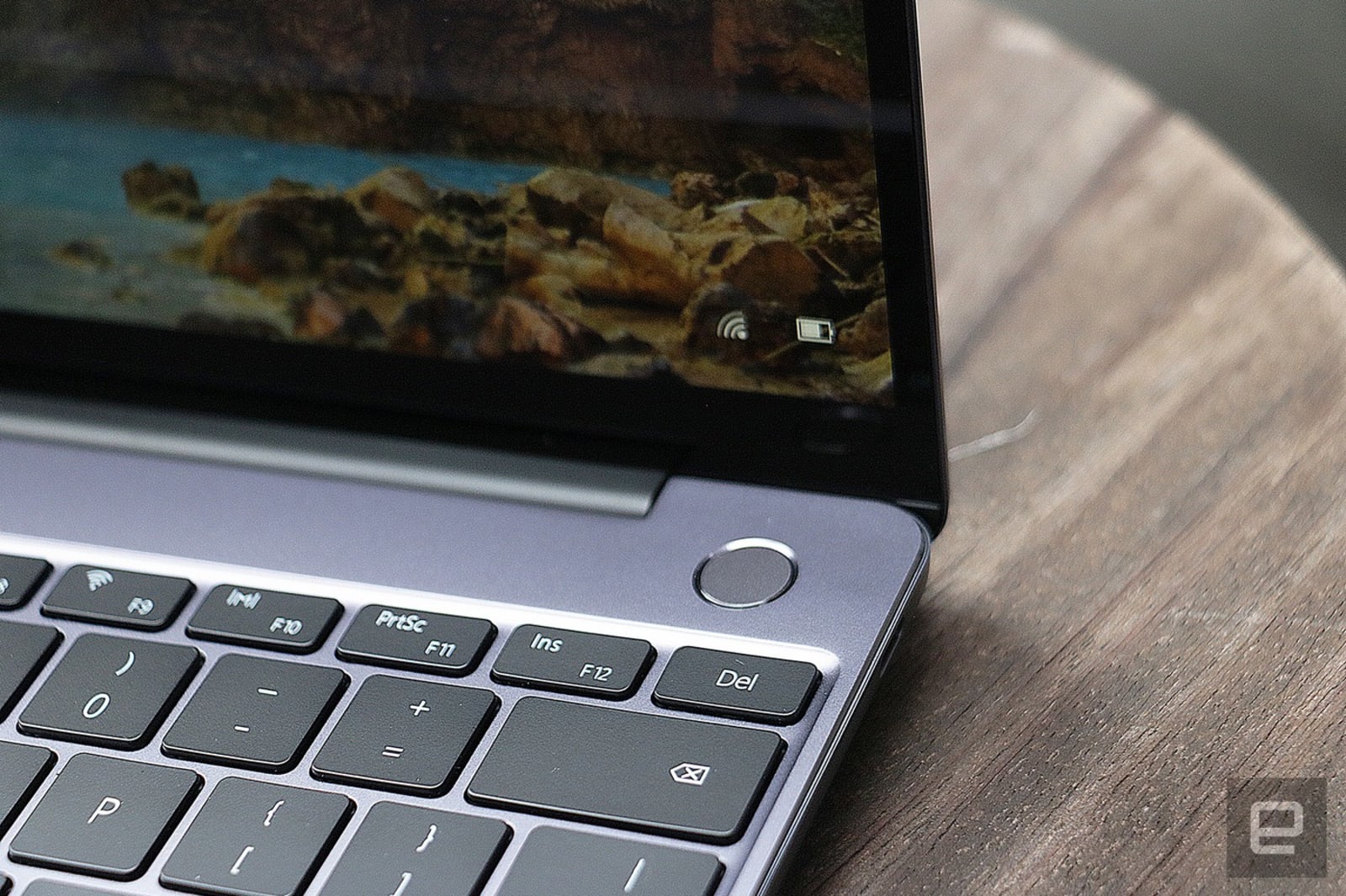 Huawei didn't resort to cutting back on the already paltry selection of ports on the MateBook X to cut costs, either. The MateBook 13 has the exact same number as its more-expensive brother. There's a USB-C on either side and a headphone jack on the left. If you need more ports, the somewhat-good news is Huawei includes a dongle that offers USB-A, HDMI and VGA (like it's 2002). The bad news is you have to remember to carry it around because, otherwise, it's pretty limited.

But hey, at least its keyboard and trackpad are great to work on. Instead of almost-flat keys with basically no travel, like the MacBook Air, the MateBook 13 provides a more familiar feel. I really enjoyed typing on it. Not only was there ample travel but each button was satisfyingly responsive and surprisingly quiet -- especially compared to typing on the Surface Laptop 2, which suddenly sounded like a cacophony of plastic drums.

The MateBook 13's trackpad is just as pleasant to use. It was very smooth and actually wider than the MateBook X's, giving me a bit more room to work with when pinching to zoom. I wish it were slightly taller, but that's a minor complaint. 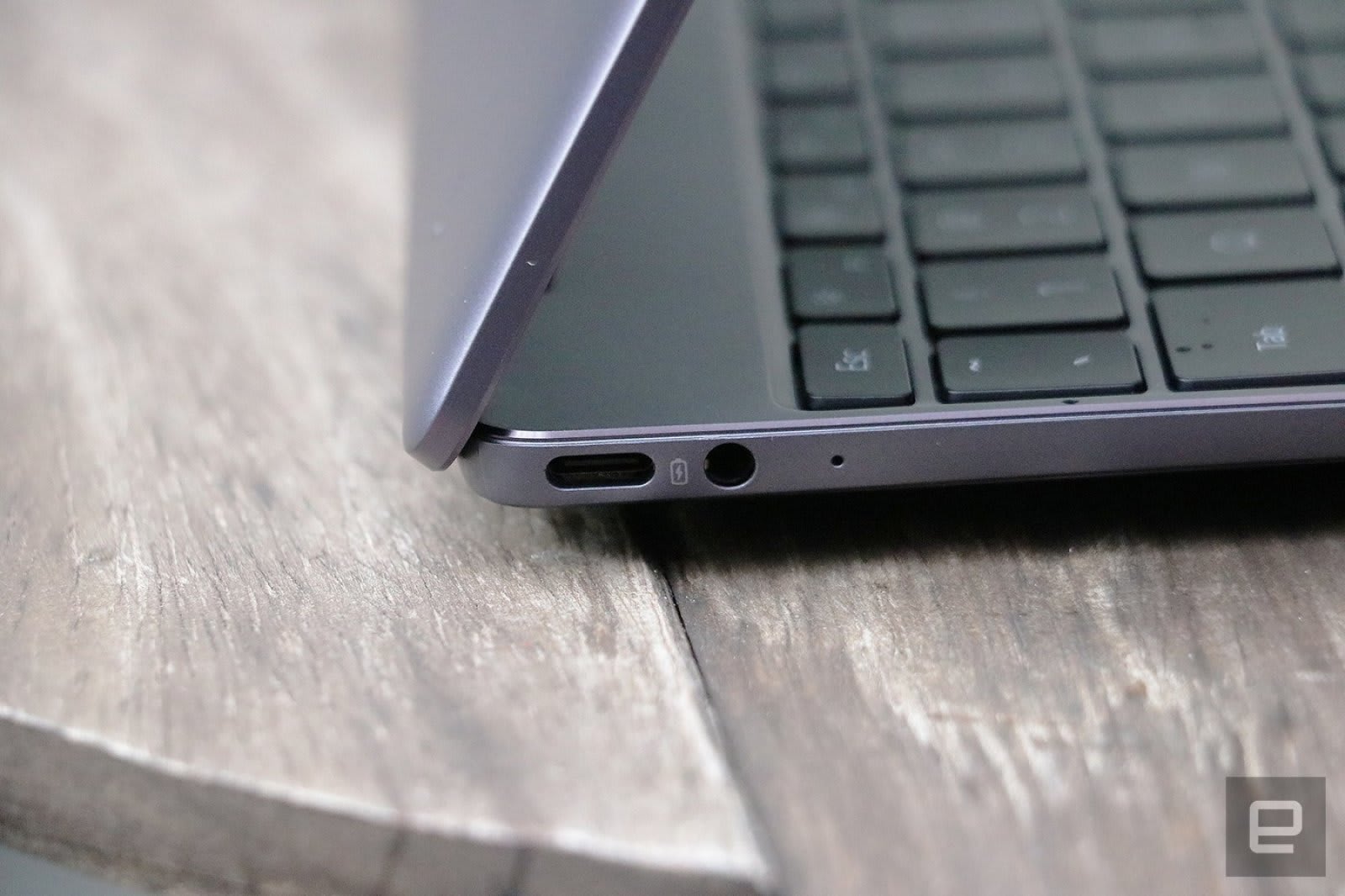 In general, the MateBook 13 handled my usual workload just fine. More than fine, actually. It didn't stutter as I jumped around between multiple Chrome tabs and windows, while watermarking pictures and running benchmarks in the background. Installing apps like my batch-photo editing software happened almost instantly, and converting a set of ten photos took just one second.

The MateBook 13 completely destroyed the XPS 13 (2018) and the Surface Laptop 2 on the 3DMark Sky Diver graphics benchmark, scoring a whopping 9,392 versus the Dell's 4,901 and the Surface's 3,977. It also killed both laptops on the 3DMark 11 benchmark, though it came in just two points under the Microsoft laptop on PCMark 7. To be fair, the MateBook 13 has a newer, faster Core i7 CPU than those other systems and packs a discrete NVIDIA GeForce MX150 graphics card. Those are really nice guts for the price.

When running more taxing tasks like a performance benchmark, the MateBook 13's dual fans kick in to keep it cool. Huawei said its Shark Fin 2.0 thermal system uses "intelligent filtering solution" software, which analyzes data from seven thermal sensors inside the chassis to monitor temperature changes. This lets the laptop manage performance and reduce fan noise by about 3 dB compared to other traditional fan designs, according to Huawei. I don't have an exact decibel measurement to verify that claim, but I can say the MateBook's fans definitely made noise. It wasn't very bad, but it wasn't noticeably softer than other systems in my experience. Though the notebook's base got warm enough that I didn't want to leave it on my lap for too long, it never became searing hot.

Huawei said the Core i5 version of the MateBook 13 can last up to 10 hours when playing Full HD video, and that fell in line with my experience. I have the Core i7 model, which is supposed to have slightly shorter battery, and it conked out after nine hours of looping a full HD trailer on 65 percent brightness. That's shorter than the Dell XPS 13 from last year by about 50 minutes, and hours less than the Surface Laptop 2. In general, though, the MateBook 13 made it through most of my workday before needing a charge.

At its $999 starting price, the MateBook 13 is a good combination of powerful specs and compact body. It does face tough competition from the Dell XPS 13, though, which is the gold standard in the category and is frankly your best bet. The XPS lasts longer and starts at just $900. The prices line up more closely when you tweak the specs on the XPS 13 to match the MateBook, though. And there's nothing you can do to improve the XPS's graphics performance or move its nostril-facing webcam. The new 2019 model fixes the webcam problem, but we haven't had a chance to test it out yet.

Ultimately, if you're looking for Windows power in a MacBook-like body, the MateBook 13 is worth considering. It doesn't stand out or break new ground, but it is a capable machine. Just know that there are plenty of other options you should be looking at, too.