What we're playing in February

This month, it's all about 'Assassin's Creed Odyssey,' 'New Super Mario Bros. U Deluxe' and... 'StarCraft II'?

Welcome back to Gaming IRL, a monthly segment where Engadget editors dive into everything they've been playing lately. We're well past the holidays and finally recovered from CES -- it's the perfect time to sit back and pick up a controller. Unfortunately, we haven't played one of the biggest recent releases, Resident Evil 2, but you can take a look back at our preview from E3. This month, we have a comparison between Assassin's Creed Odyssey and Origins, a look at New Super Mario Bros. U Deluxe, and one of our editors dives back into the glory of StarCraft 2.

Assassin's Creed Odyssey has everything: glorious vistas, a wide variety of skills to learn and an open world filled with tons to do. In many ways, it's the culmination of everything the series has accomplished so far, cranked up to 11. And yet as I Spartan-kick my enemies over cliffsides and deftly take out dozens of baddies with the finesse of a psychotic superhero, I can't help but feel a bit empty inside.

Even though Assassin's Creed Odyssey is technically fun, it's not nearly as rich or meaningful as 2017's Origins. That game was a narrative rebound for the series, after the abject failure of Unity and the so-so Syndicate. Origins gave me characters I actually cared about and a glimpse of ancient Egypt that felt alive with potential, so much so that Ubisoft even created a combat-free educational mode to teach kids about that era. Bayek, Origins' hero out for revenge, is also a far more interesting personality than either of Odyssey's leads. He's a man with a code, similar to Red Dead Redemption 2's Arthur Morgan, so I felt compelled to role-play him as a peacekeeper. Based on what I've played of Cassandra in Odyssey, she's a wily scamp, but not much more.

It could be that I'm just overwhelmed with having yet another open world to explore. But even that was handled better in Origins -- whereas Odyssey features a map filled with too many activities. There's always something to do, sure, but that abundance of activity also means a lot less. More than anything, Odyssey needed an editor to cut out some of the gameplay elements to focus on what truly matters. I'll finish it eventually, but I'm in no rush.

As far as I'm concerned, Super Mario World was the pinnacle of Mario's side-scrolling adventures. It took the vastness and creativity of Super Mario Bros. 3 to another level, featuring worlds that felt familiar but at the same time not at all beholden to the games that came before. I've been looking in vain for that feeling for years -- and while New Super Mario Bros. U Deluxe doesn't quite get there, it's certainly the best of the new era of side-scrolling Mario games. Since it originally was a game for the ill-fated Wii U, it could have easily been a footnote in Mario's history, but now it's getting the audience it deserves on the Switch.

At the same time, though, I can't help but feel Nintendo can do better. For starters, the visual style is identical to New Super Mario Bros. Wii (2008), which itself was merely an upgrade to New Super Mario Bros. for the DS, which came out way back in 2006. Don't get me wrong, it's effective, beautifully colorful and looks great in HD. But almost everything about the game's visual and audio design is near-identical to the New SMB games that came before it. That wasn't always the case: Super Mario Bros. 3 was a huge design leap forward from the first game in the series while Super Mario World used the extra power in the Super NES to create an entirely new universe for Mario to play in. But lately it seems Nintendo has no desire to evolve Mario's style whatsoever. Even most of the music in the game is pulled note for note from other New SMB games. 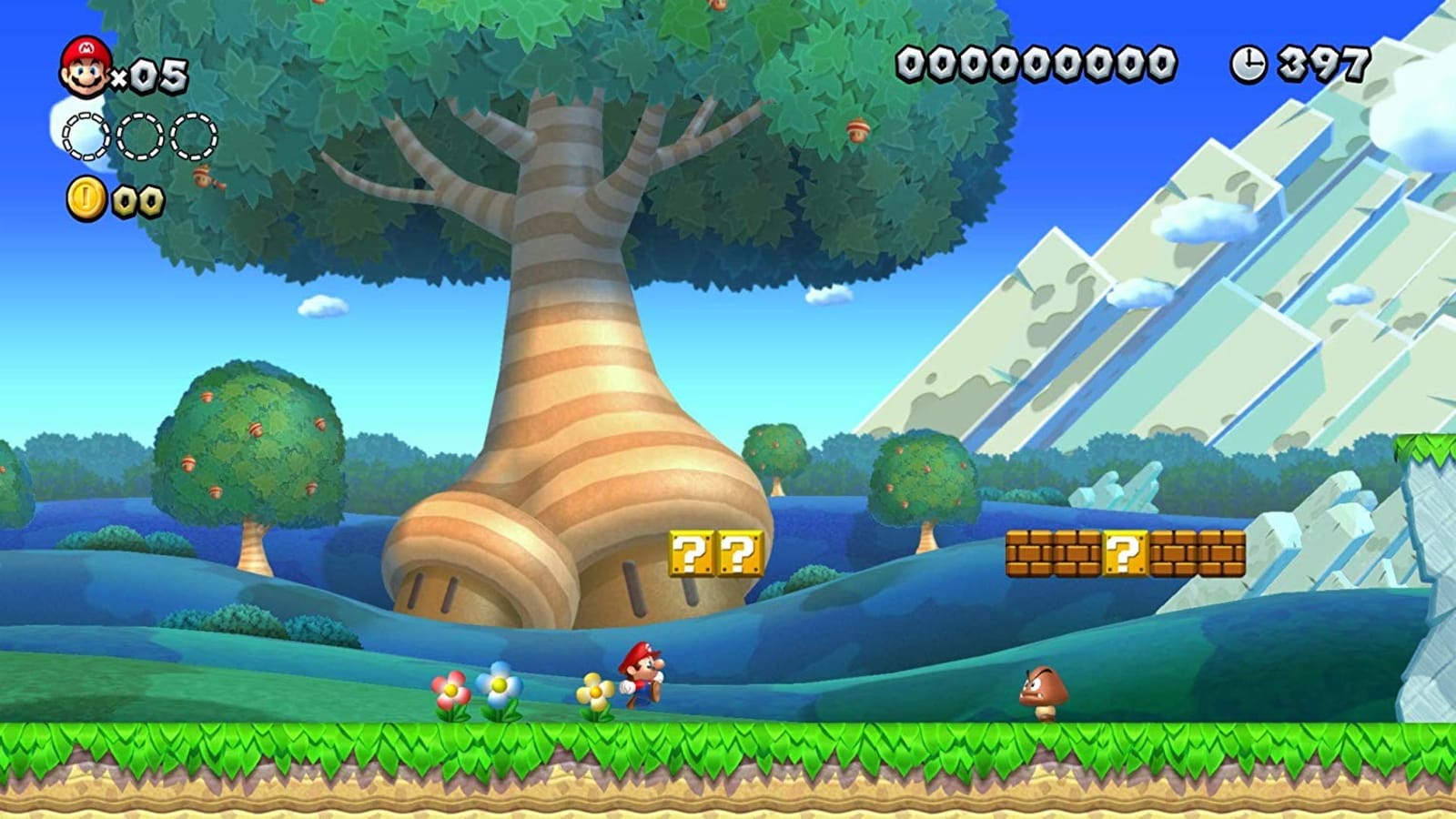 Still, there's a lot to love here. While the game may look mostly like its predecessor, Nintendo succeeds at making just about every level feel different from the ones that came before it: The Squirrel Suit is a unique flight power-up, co-op play is still chaotic fun and the game can get seriously challenging. There's also plenty of replay value: There are secret exits and star-coin galore I haven't picked up. There's no doubt that New SMB U Deluxe is a delight to play and one of the best side-scrolling Mario games ever. I just hope that next time Nintendo revives the series, it doesn't feel quite so beholden to the games that came before. My earliest and fuzziest memories of StarCraft are playing against my cousin, hunched over an old ThinkPad laptop. We were young and absolutely terrible. They were the "20 mins no rush" kinda games where we'd eventually schedule a clash in the middle of the map with huge late-game armies to determine a winner. These matches were the polar opposite of high-level play but were fun enough that StarCraft II was an instant purchase for me when it was released in 2010.

I'd grown older, wiser and more competitive by that point though. I wanted to play the game how it's supposed to be played, but the learning curve felt so steep that my initial motivation quickly waned. Getting consistently demolished on the ranked ladder will do that to a person. But I didn't fall out of love with the game entirely. I continued to watch pro players showcase their insane skills whenever a major tournament popped up on my radar.

I can't remember exactly what triggered me to reinstall it after so many years. Between the launch of StarCraft: Remastered in 2017 and the franchise's 20th anniversary last year, the game had just sort of been on my mind. I began watching StarCraft II Twitch streams more regularly and found that YouTube was a goldmine of beginner-friendly resources. The learning curve didn't seem so daunting anymore, or at least the path to progression became clearer.

Slowly, StarCraft II has become more and more entrenched in my regular rotation, and by complete coincidence, a friend recently asked if I had ever played. He and his friends had established a little group, which I'm now part of, that jumps online once every few weeks for a couple of team games or free-for-alls. And I've never had so much fun playing StarCraft. I'm never going to be AlphaStar AI-level proficient, but I've found that, for me anyway, getting better has simply been a case of actually enjoying the game again. Do you remember browser-based RPGs? A few still exist, but they were something of a phenomenon in the early 2000s. People logging on to web pages to play mostly text-based games seems quaint now, but they attracted huge audiences. One of my favorites was Kingdom of Loathing, a take on the fantasy genre where mighty Accordion Thieves did battle with mystical Pastamancers. (You know, wizards who only summon spaghetti?) That should give you a decent sense of Kingdom of Loathing's surreal (and heavily pun-based) sense of humor. I played the game obsessively for a few months in high school but then forgot about it and assumed it faded into the black hole where all old web pages go.

So imagine my surprise when browsing through the Nintendo Switch game store I came across West of Loathing, a standalone release from the same developers that transports Kingdom of Loathing's aesthetic into the Wild West. There's a plague of undead cowboys and the looming threat of a demonic horde of satanic cattle, and if you want to make it to Frisco to seek your fortune you need to help get this here railroad built.

The humor in this game won't be for everyone (though I cackled for a solid five minutes when I discovered that a mausoleum where all the reanimated skeletons were named Dave was officially called the Daveyard). But the underlying RPG mechanics and turn-based combat are solid, and it has a complex system of stat-boosting items that has kept me tinkering with my Beanslinger to try to max my damage (a Beanslinger is a cowboy who throws beans at their foes; try to keep up). Beyond that there are a few companions to recruit, puzzles to solve (which range from simple to borderline nonsensical) and a decent-if-basic crafting system. Also you can become an undead god or help a cactus find love. It's that kind of game.

West of Loathing is also available on Steam, but I recommend you play it on Switch for one reason: No exaggeration, this game has the best haptic design I've ever experienced. Different actions summon vastly different feedback from the controls, and I swear they even tried to mesh the vibration of the motors into the sound effects. But really, you play a game like this for the writing. The plot, such that it is, doesn't make an enormous amount of sense and the graphics are literally hand-drawn stick figures, but if you like puns about cattle and have an unnatural fascination with spittoons, do I have a game for you.

West of Loathing has been out since 2017, but if you haven't played it yet, now's the perfect time. There's a rumor that railway is about to be extended all the way to the Desolate Lonesome Coast... (It's DLC. They're about to release some DLC.)