After years of development, Vuzix is now ready to ship the Blade, its first pair of consumer-ready smart glasses. I had a good look at it last month, but at the time, it was lacking a few core features like Alexa integration and step-by-step directions. Over the past week however, Vuzix shipped a couple of big software updates and I was finally able to test them out. The features certainly make the Blade a lot more functional than before, but they're still not enough for me to recommend these $1,000 pair of glasses.

As a reminder, the Blade is essentially a modern-day reimagining of Google Glass. As I said in my initial hands-on, the Blade isn't meant to go up against the likes of augmented reality headsets like the Magic Leap or Microsoft's HoloLens. Instead, it's designed to be a smartphone companion, much like a smartwatch. Except rather than getting notifications on your wrist, you'd see them floating in front of your eyes thanks to a full-color see-thru display on the right lens. It runs on a proprietary Blade OS that's based on Android, and you can download a bunch of apps for it as well.

A lot of the core features on the Blade are very smartphone-like. For example, I was finally able to test the Blade's call and messaging functions (I tested the Blade with a Google Pixel 3 as well as an iPhone XS). When incoming calls appear on the Blade's display, you can answer or decline them by tapping on the side of the glasses. However, do note that you'll still need your phone around to actually chat with the person on the other end, as the Blade doesn't have speakers built-in. Vuzix says it's working on making it possible to chat using a Bluetooth headset connected to the Blade, but that functionality is not available just yet.

Responding to messages works in much the same way, except they appear in the form of a drop down notification. When selected, you can choose one of several quick or preset responses such as "I'm busy" or "I'll call you back" from either the Blade or the companion app. That said, message replies only work when I was using the Pixel 3. That's because this feature only works with the Blade connected to an Android phone, and not on iPhones. 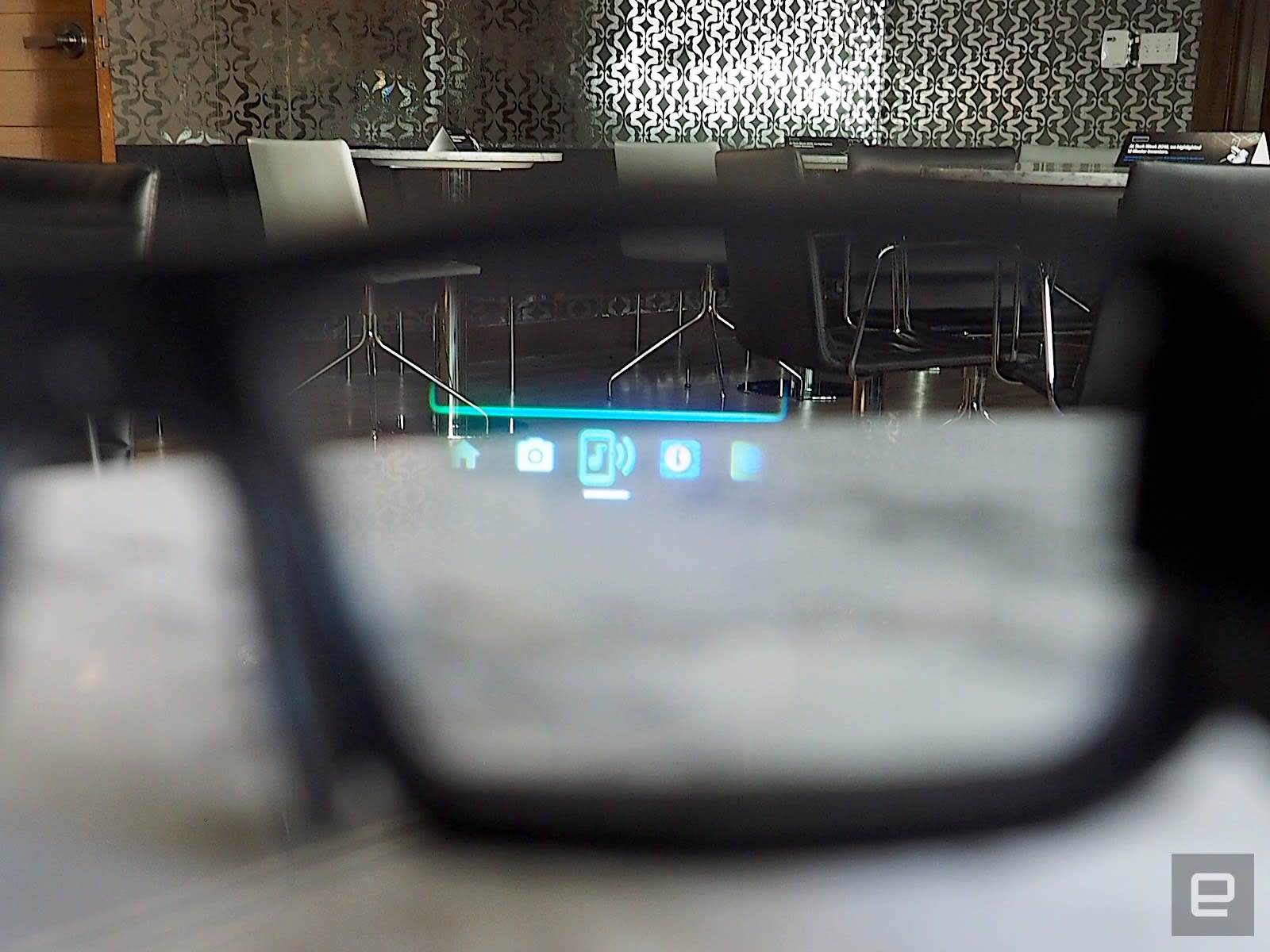 Another feature that only works with Android is Google Maps notifications. This is especially useful, because you can use the Blade for step-by-step walking directions. Whenever I approached a corner where I had to make a turn, I would get a notification on the Blade's screen telling me to make a right or a left. Or, at least, that's the idea. There were times when I wouldn't get the notification until I had overshot the intersection.

I was also able to test the Alexa app for a few days. As mentioned in the previous hands-on, in order to trigger Alexa, you have to swipe over to the app and tap the touchpad to activate it, then tap it again to end it. Since it uses Alexa's Smart Screen SDK, it's a little like having a mini Echo Show in the glasses. I asked it for the weather, for example, and it showed me the five-day forecast in addition to telling me about the current conditions. That's pretty useful, but the app does have a couple of issues. For one thing, the Alexa app requires the Blade to have a direct WiFi connection; simply connecting to your phone isn't enough. Additionally, the Blade doesn't have a speaker, so you need to use a Bluetooth headset in order to hear what the Alexa app is saying. Because of these barriers, I ended up not really using the Alexa app anyway.

Last but not least, Vuzix has updated the companion app so you're now able to access photos captured on the Blade. From there, you can share them on social media or just save them for safekeeping. You're still not able to share them directly from the Blade, but I don't think that's a big deal. 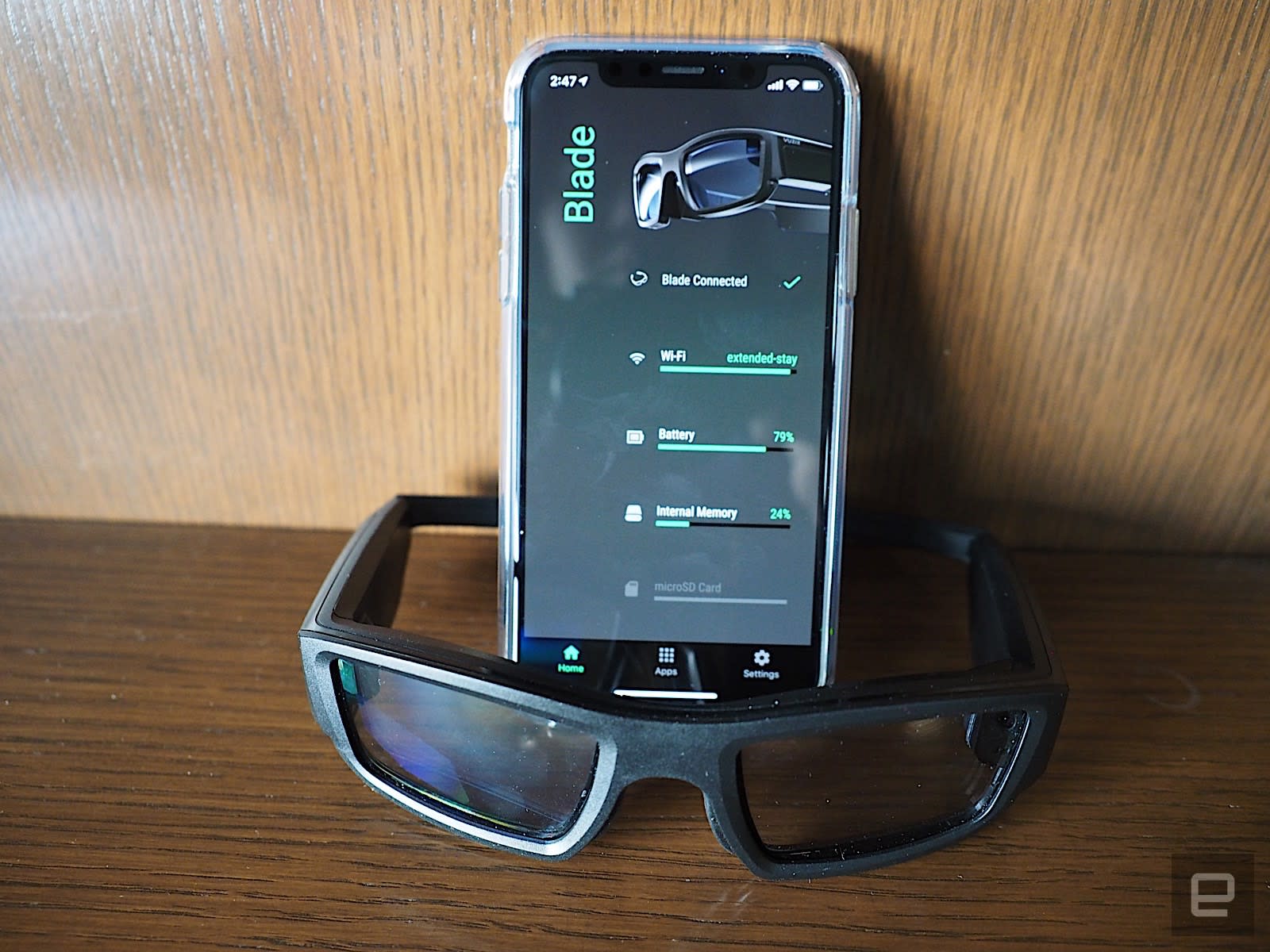 All of these features certainly make the Blade more useful than an ordinary pair of glasses. But it still has too many downsides for me to recommend it. As I mentioned in my initial hands-on, the Blade looks clunky, and I found it to be a little too heavy and big for my face. Plus, the battery life isn't great either. In my testing, it lasted about three or four hours at most with just minimal tasks like using Alexa, snapping a couple of photos and getting notifications. According to Vuzix, the Blade can last around 12 hours with intermittent use, and that might be true if you cut down on the number of notifications you get, but that negates the purpose of the glasses a little in my opinion.

The Blade also isn't the only pair of smart glasses on the market right now. North's recently released Focals are meant to be a smartphone companion as well. Like the Blade, they cost at least $1,000 and you can use them to respond to messages, get directions and they're powered by Alexa too. The Focals also have a speaker built-in, so you don't need to use a Bluetooth headset to hear Alexa.

You interact with the Focals using a thumb joystick, which means you don't need to mess around with tapping a touchpad on the side of your glasses (which I did find a little annoying). Plus, the Focals are far more attractive. No, the Focals don't have a camera, you can't use them to watch videos or play games, and they're only available in certain markets right now. But looks are important when it comes to wearables, and if I'm going to spend $1,000 on something I'll wear on my face, I'd want it to look as good as possible.

In the end, the Blade has too many shortcomings for me to recommend it. I can see it being interesting for a subsection of the population that wants to try out cutting edge tech, but that's about it. Some features seem a little half-baked, the battery life isn't great, and it has a clunky, unattractive appearance. That just isn't worth $1,000 in my book.