Vuzix Blade $1,000 smart glasses are ready to meet your face

Vuzix has been making smart glasses for well over a decade, primarily for enterprise use such as medical applications or stocking shelves in warehouses. Last year, Vuzix teased a prototype of the Blade, a smaller, slimmer pair made for consumers. Not only does it come with a floating display a la Google Glass, it's also compatible with Alexa (and, eventually, Google Assistant). Now the company says it's ready to ship the Blade for $1,000 as it attempts to pick up where Google Glass left off.

"This represents a huge step forward for us," Vuzix CEO Paul Travers told Engadget. "It's the beginnings of a brand new category of product."

The idea behind the Blade, according to Travers, is not to be an augmented-reality headset like Microsoft's HoloLens or Magic Leap. "We're not about whales jumping out of floors," he said, referencing a famous Magic Leap demo. "We consider AR, VR and mixed reality big and bulky computer wearable systems as completely different from the problem we're trying to solve." 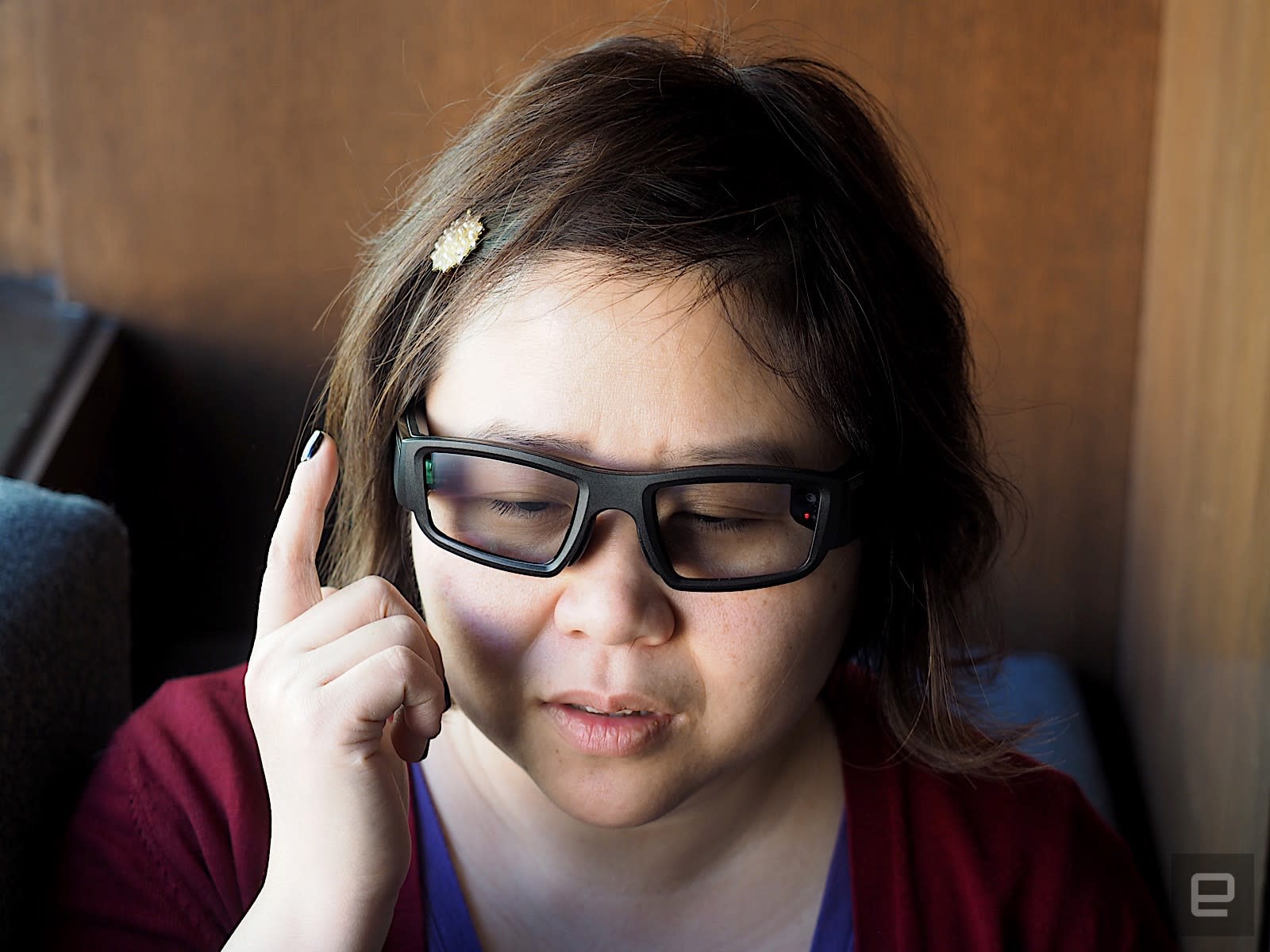 Instead, the Blade is meant to be used in conjunction with your smartphone. "They're designed as a companion to work with your phone, so you can leave your phone in your pocket," said Travers. It essentially promises the same features as a smartwatch, except it lives on your face instead of your wrist.

Travers isn't shy about admitting that the Blade is something of a Glass successor. But unlike Glass, which made anyone wearing it look a bit like a sci-fi character, the Blade was designed to look and feel like a normal pair of glasses. "Glasses have to be light and sexy-looking in order for people to wear them," said Travers.

Yet I didn't find the Blade to be particularly attractive. I had the chance to try out the consumer version of the Blade for a week (albeit with unfinished software) and I found it cumbersome, clunky and overall just unflattering. The Blade appears to complement some face shapes more than others, as it looked better on a couple of my colleagues than it did on me. 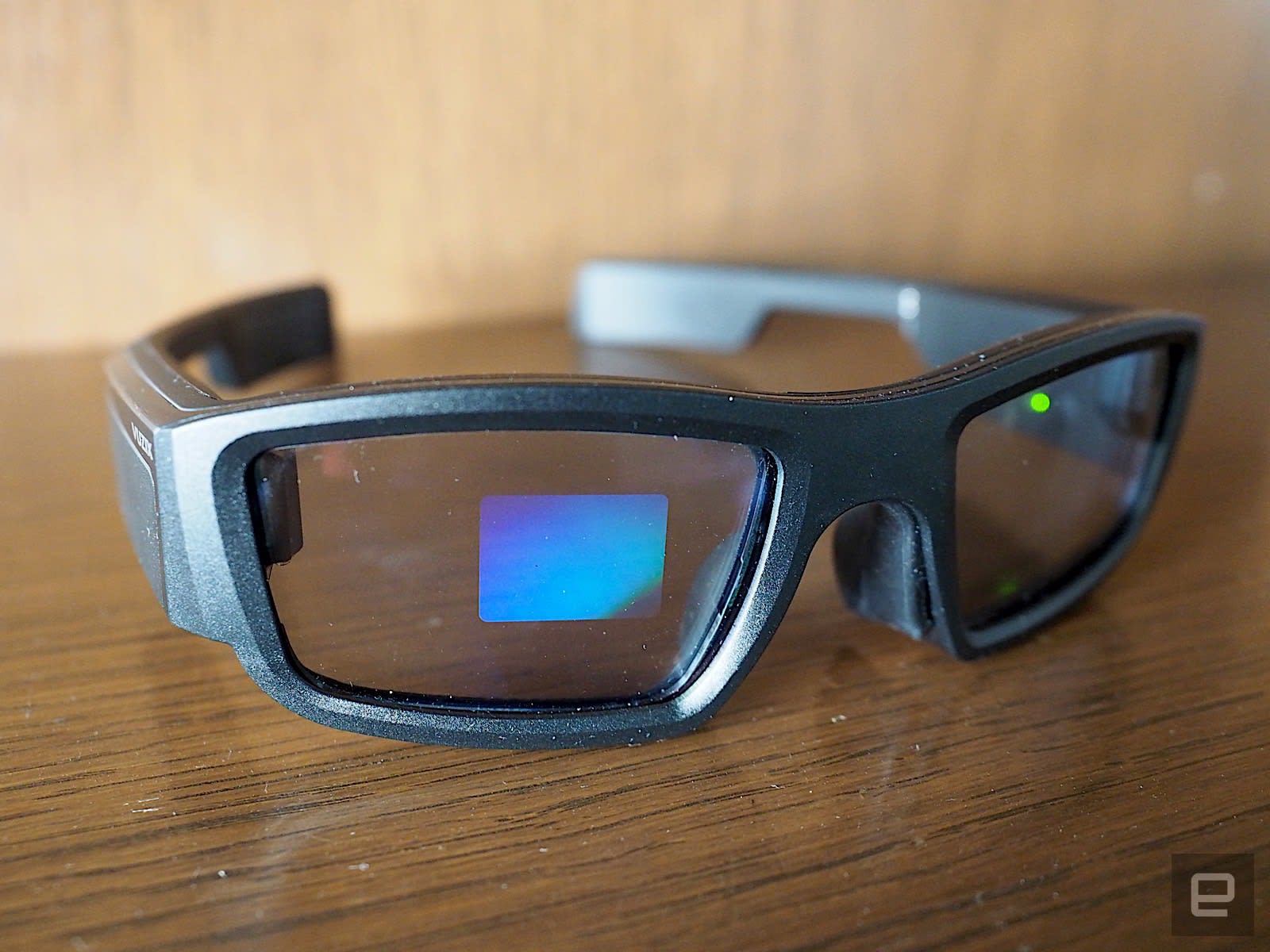 Unfortunately, the Blade only comes in one style, at least for now. Vuzix does provide a couple of customization options -- you can add prescription lenses as well as different nose bridges for a better fit -- but you're stuck with the overall style. What's more, the Blade isn't particularly discreet: The reflective light in the middle of the lens is a dead giveaway that you're wearing something unusual. The Blade certainly looks more like a normal pair of glasses than Google's Glass did, but it's still far from something I'd choose to wear.

Appearance aside, I'll admit the Blade's display is impressive. While Google's headset floated a tiny projection in the corner of your eye, the Blade has a full-color see-thru screen that takes center stage in the right lens, as it overlays on top of the real world. It can even be moved around and repositioned so that it fits within your field of view.

The Blade uses a proprietary operating system called Blade OS, which is based on Android. The launcher interface is simple, with an array of shortcut icons on a bottom rail and a larger preview icon on top. To navigate, you use the touchpad on the glasses' right side to swipe and tap your way around. 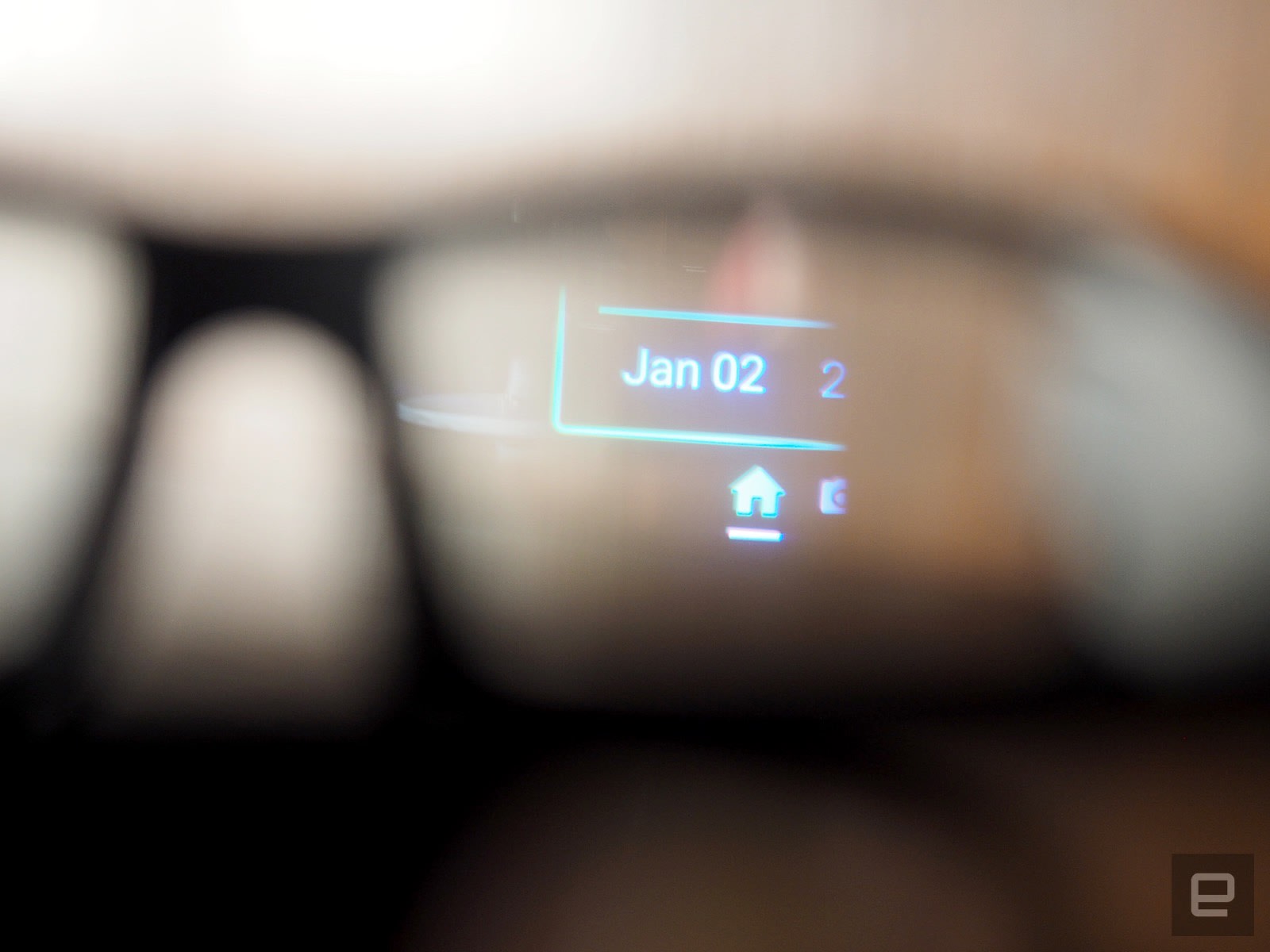 The glasses can be used without a phone thanks to WiFi connectivity, but it's a lot more useful when paired with your Android or iPhone via a companion app. When connected, the Blade receives all the usual smartphone notifications such as calendar reminders and incoming messages.

One way in which the Blade differs from smartwatches is the built-in 8-megapixel camera that you can use to snap photos or record video. When the camera app is in use, a red-light indicator will let everyone know it's activated in order to alleviate privacy concerns.

One of the Blade's most promising features is that it works with Alexa (you have to turn it on in settings first). Vuzix says this is due to privacy reasons, but it's also because you'll have the choice of which personal assistant you want. As of this writing, Google Assistant integration is still in beta, but according to Vuzix, it'll work similarly. 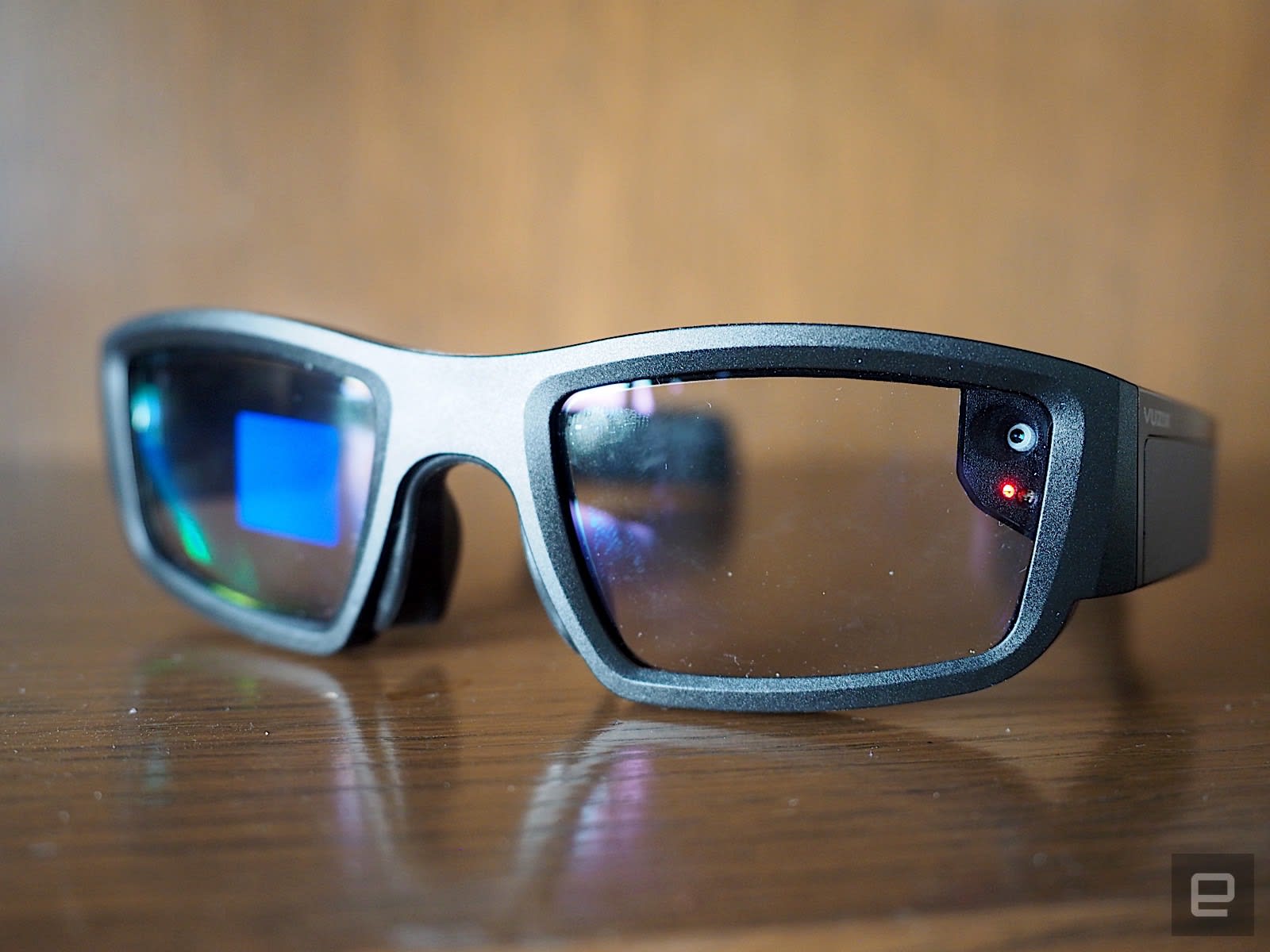 I wasn't able to test either voice assistant due to its prerelease software, but I did get a sneak peek of the Alexa functionality last month in a separate demo. To trigger Alexa, I had to tap the touchpad once, and then I had to tap it a second time to signify I was done speaking. It uses Alexa's Smart Screen SDK, so it's a little like having an Echo Show in your glasses. When I asked it for the weather, for example, it showed me a five-day forecast in addition to telling me the current temperature.

The Blade also comes with its very own app store and, according to Travers, it already has hundreds of developers onboard. Potential apps include video streaming, web browsers and even games. That said, some of the titles strike me as pretty silly. For example, I tried playing a racing game on the Blade that uses the touchpad for controls. Tapping the side of my head to race a car just feels awkward and seems more like a proof-of-concept.

Still, Vuzix promises that, eventually, you'll be able to do more with the Blade. You could potentially use it for step-by-step walking directions, or for watching video clips on YouTube. Vuzix also says that you'll be able to interact with virtual objects in the real world. So if you passed by a movie poster, you could point at it and the trailer would start playing, for example. "Imagine if you were walking past a restaurant, you could see the Yelp listing pop up," said Travers. "You could tap on it, read the reviews and even book dinner for next week." 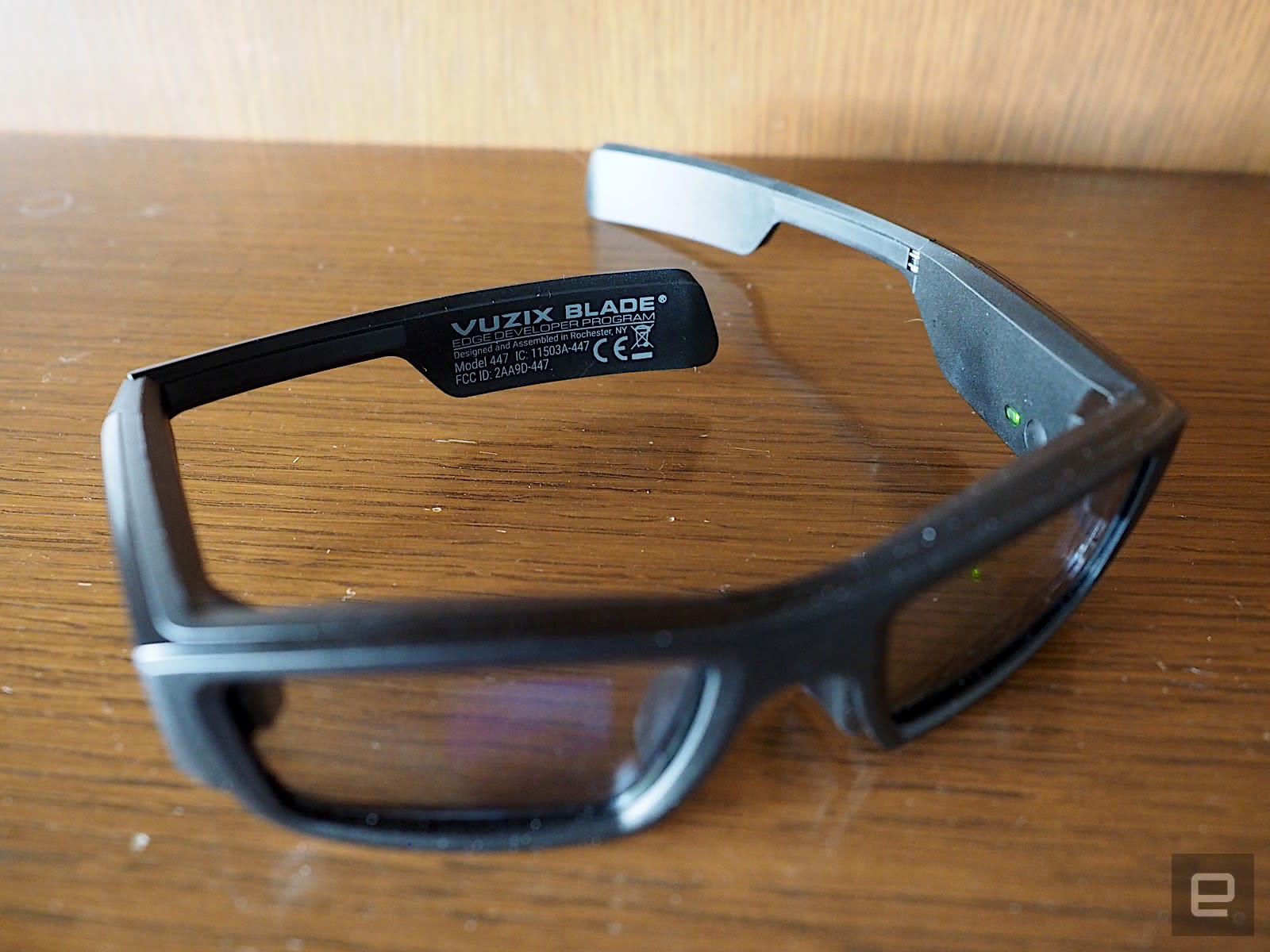 A few months ago, North introduced Focals, a rival pair of smart glasses with holographic-display technology. Just like the Blade, the Focals are meant to be a smartphone companion, and you can use them to respond to messages and get directions. It's also powered by Alexa. The Focals aren't quite as advanced as the Blade -- you can't play games on it, it doesn't have a camera, and you can't use it to watch videos -- but it's also far better-looking. And in the world of wearables, that's a pretty important detail.

So far, I've had a pretty rough experience with the Blade. The Bluetooth connection seems flaky, Alexa isn't ready just yet and I don't have any way to transfer photos taken on the Blade to my computer (Vuzix is aware of my issues and is working on a solution). But, as I mentioned, I don't quite have the final software just yet, and I'll reserve my final judgment until I do. If you don't feel like waiting for that, however, the Blade is available for preorder; it'll start shipping at the end of this month.