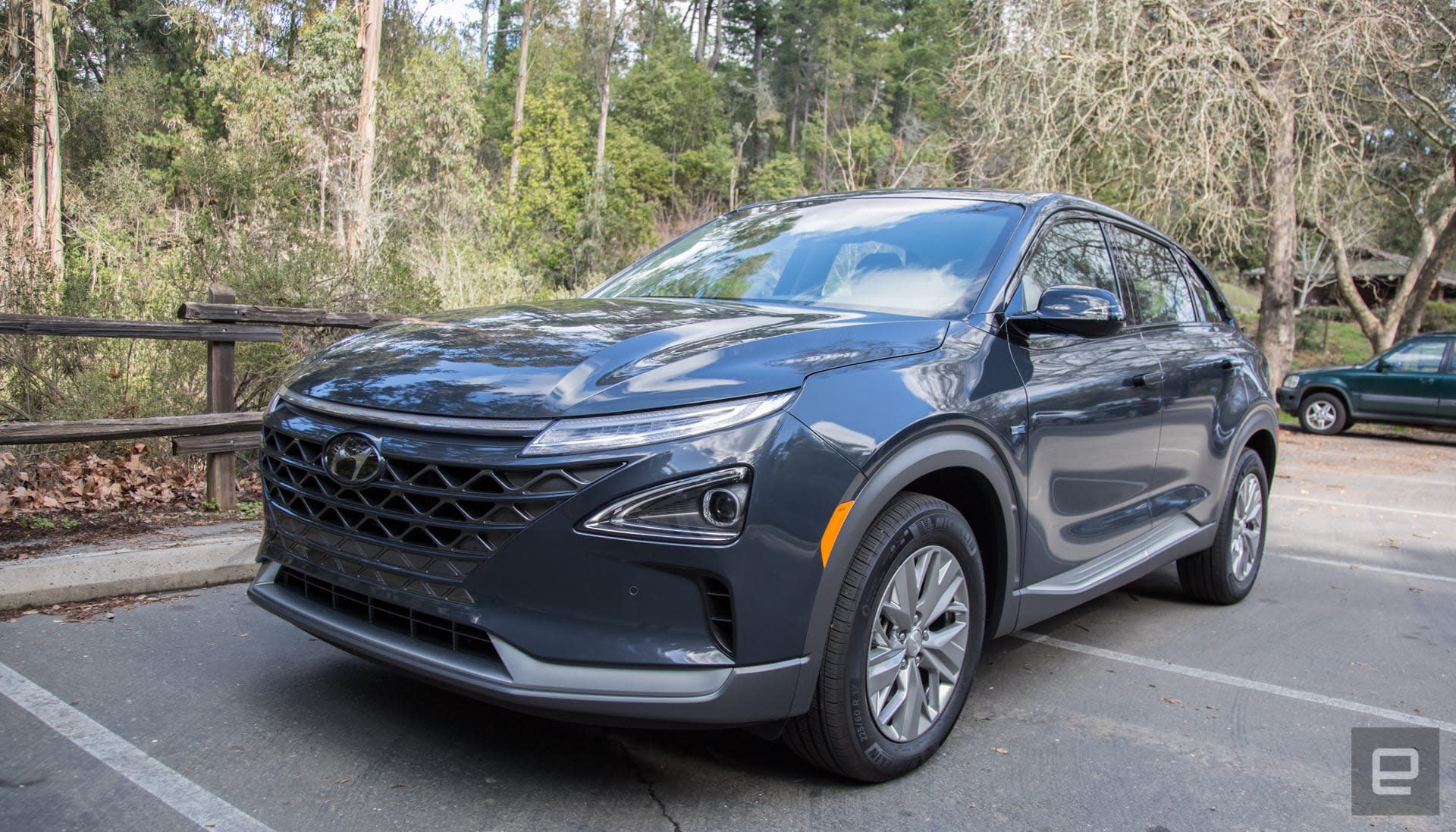 Too bad you can only drive it in a few places.

The future of hydrogen fuel cell cars is still in doubt. It all comes down to infrastructure and there aren't enough stations for most to even consider purchasing a vehicle that emits water instead of pollutants. Still, that hasn't stopped Hyundai from producing a legitimate reason why the infrastructure problem should be tackled in earnest.

The Hyundai Nexo (starting at $58,300) is the automaker's most technically advanced vehicle to date. It also happens to be comfortable, easy on the eye, a bit luxurious and, more importantly, ready to tackle most anything an SUV owner would throw at it. All of that and it only spits out H2O at the end of a drive.

The Nexo's powered by three hydrogen fuel cell stacks and a 40kWh battery pack. Which sort of makes it a fuel-cell hybrid. The battery adds additional torque during initial acceleration and can take over during slow driving or while the vehicle is cruising on the highway. During my tests (like nearly all hybrids), the battery pack delivered the power you wanted off the light while helping supplement the driving force produced by the electrochemical reaction of the hydrogen and air. All that juice then flows to a single electric motor that drives the front wheels.

The result is a whopping 291-foot-pounds of torque, but less impressive 161 horsepower. That means it's ready to take off quickly but after the initial jolt, the power falls off. It never resulted in any issues merging into traffic — even with on-ramps going uphill. It also made driving through town a breeze knowing that if you needed too, you could pull away from a stop light quickly.

The addition of a battery pack does improve the Nexo's driving experience and with it, the car has a combined miles-per-gallon equivalent of 61 (57 if you opt for the "limited" version). During my tests, I averaged about 55 MPGe in mixed driving environments that included hills. This efficiency also helps the vehicle achieve up to 380 miles of range. Which is great, but you still have to make sure that during that journey you encounter at least one hydrogen fuelling station. 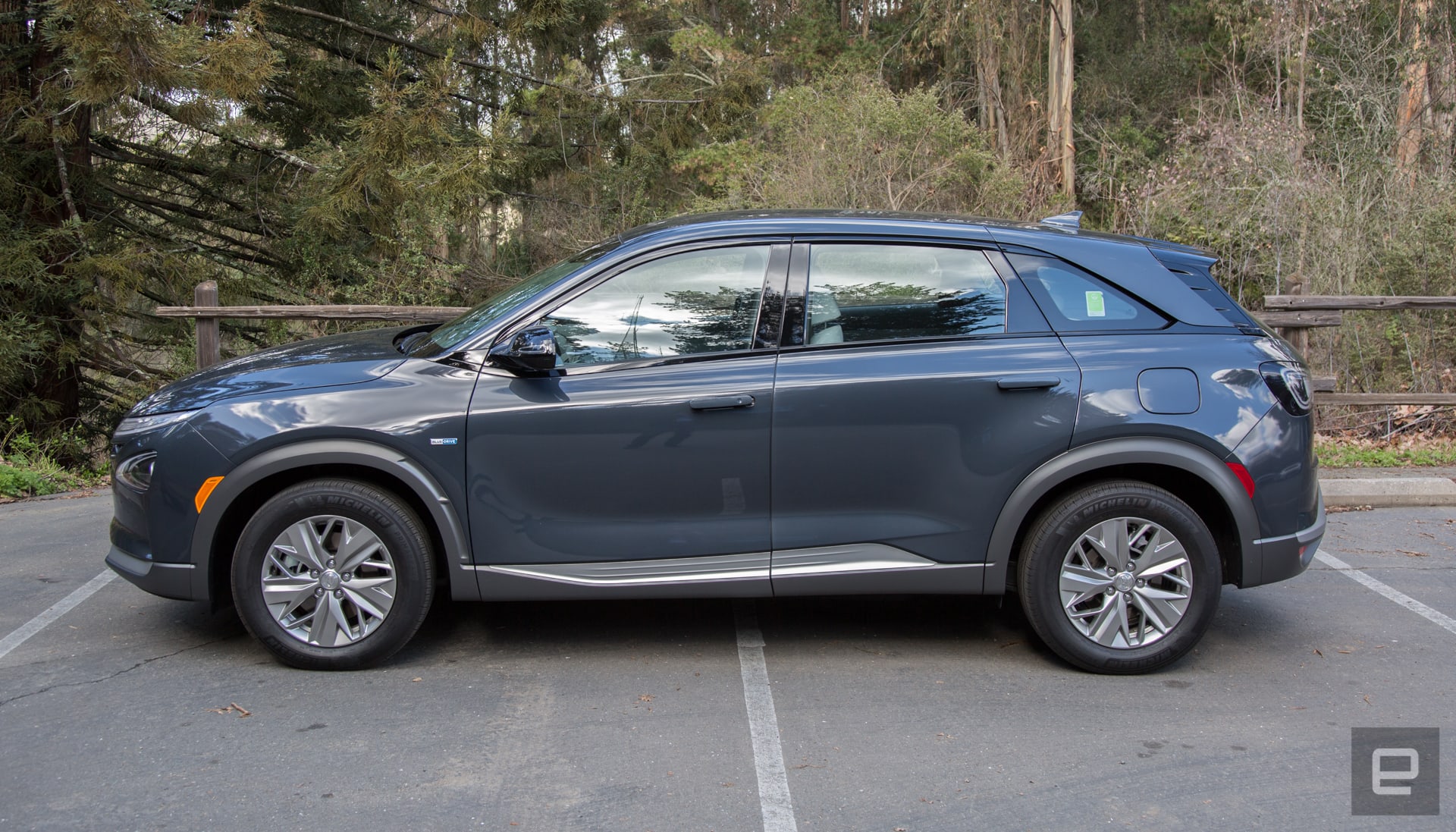 The technology under the hood is joined by Hyundai's driver's assistance package, and it's a bit of a mixed bag. The adaptive cruise control did a bang-up job in traffic and I was surprised how well it handled vehicles merging in front of it. Instead of slamming on the brakes when a new car appeared ahead, it smoothly applied the brakes and reduced acceleration.

Lane-keep assist, on the other hand, only worked well if the road I was on was straight or maybe had a very wide turn. Anything beyond that and the Nexo would veer out of its lane. Hyundai said that its system has been updated to better center the vehicle, which I noticed, but again, only while going straight.

Inside the vehicle, the in-dash tech is pure Hyundai. Which is actually a good thing. The automaker has been putting out infotainment systems that, while not exciting, work exactly how they should and are easy to navigate. The Nexo's system has a customizable home screen that displays the three features you care most about. Control of the 12.3-inch touchscreen is supplemented by a clickable scroll wheel on the center dash console. Above it are buttons for quick access to the home screen and the ability to quickly back out of a submenu.

Where that scroll wheel resides is a source of oddness in a vehicle that seems to have done almost everything right in terms of its comfortable and roomy interior. The center console's silver-on-silver design has a barrage of buttons that look the same and can be tough to navigate. Worse, at certain hours of the day (typically dusk) I was unable to read the text on the buttons without cupping my hand over them.

The seats though, with their "vegan leather" and cloth accents look outstanding and are comfortable — as is the rest of the cabin. The rear cargo area with the seats up has 30 cubic feet of space. It's this that gives the Nexo an advantage over the fuel-cell offerings from Toyota and Honda. The Mirai and Clarity are both sedans and the market wants SUVs with all the utility that come with those larger vehicles. The Nexo enters a market that loves larger vehicles and that should work well for Hyundai. Possibly. 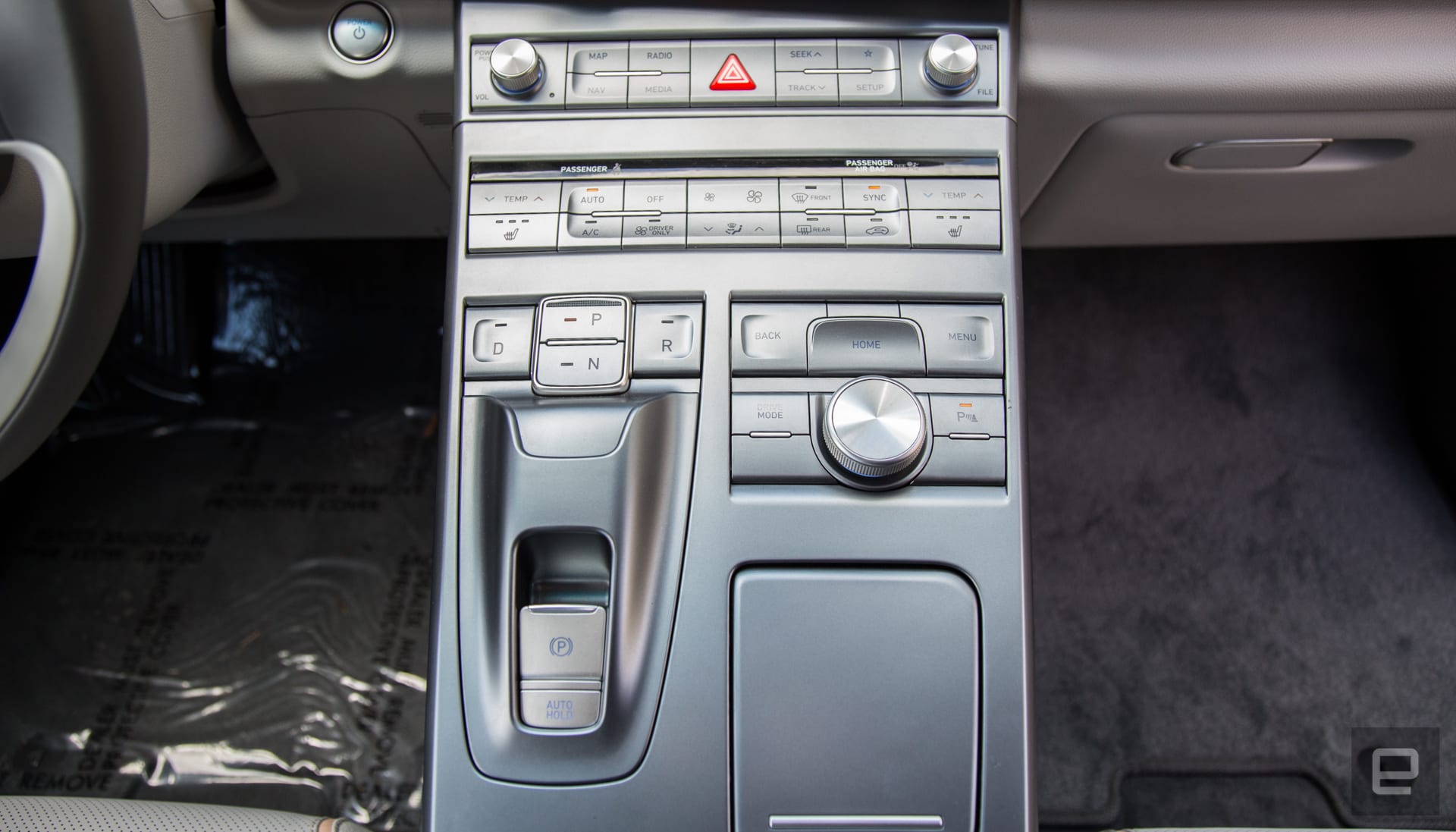 Like all fuel-cell vehicles, they're mired by the lack of practical refueling infrastructure outside of California and certain areas in New England. In fact, you can only buy the Nexo in California. Even then, you should make sure you're in LA or the Bay Area.

Hyundai (like Toyota and Honda) is sweetening the deal for anyone willing to take the fuel-cell plunge. The cars come with three years of free fuel up to $13,000. Plus, owners or leasees also receive seven free car rental days a year for when they want to take a trip anywhere their SUV can't be refueled.

Of course, if you're someone that wants to live on the bleeding edge (kinda) of vehicle technology, the Nexo can be a pretty good deal — if you live near a fueling station. If Hyundai could magically expand the fuel-cell infrastructure, the Nexo would be a solid choice for aficionados of driving that want to reduce their carbon footprint (while not having to wait hours to recharge their vehicle). But we're not there yet and we might not ever truly embrace fuel-cell as an alternative to EVs and gas cars. But if we do, Hyundai is ready.