In December 2015, Mozilla announced it would be abandoning Firefox OS as a smartphone platform. Many assumed the company's withdrawal would kill any hope of a mobile operating system built around the open web, rather than a combination of native apps and tightly-controlled storefronts. In the last few years, plenty of "alternative" smartphone platforms, including Ubuntu Touch and Windows 10 Mobile, have faded into obscurity, too. Jolla has struggled on with Sailfish OS, but it's never felt like a true challenger to the Android and iOS duopoly.

How did it grow so big, so quickly? With a little help from Firefox OS.

Sebastien Codeville, CEO of KaiOS, is an engineer by trade and spent his early career at Alcatel Mobile and Philips. In 2010 he joined TCL -- best known for its high-value 4K TVs -- to develop its mobile business in the US. Alcatel Mobile had started as a joint venture of Alcatel-Lucent and TCL. By this stage, however, the partnership had ended and TCL was building Alcatel-branded phones on its own. Codeville, therefore, had a new employer but a familiar mission: to make Alcatel phones mainstream.

Firefox OS started as an experimental project called Boot to Gecko in 2011. The platform consisted of a few key components: Gonk, a lower-level operating system; Gecko, a rendering engine that powers Firefox; and Gaia, a UI built with common web technologies such as HTML, CSS and Javascript. The goal, according to former Mozilla CTO Andreas Gal in 2011, was to build "a complete, standalone operating system for the open web."

The following year, Boot to Gecko was shown off to the world and formally rebranded as Firefox OS. TCL pledged its support and started working on the Alcatel One Touch Fire, a low-cost smartphone designed for emerging markets in Europe and Latin America. Later, Codeville and his team worked on a Jitterbug-branded phone that ran Firefox OS and would be sold through GreatCall, a US network aimed at the elderly. "The technology was great for what we wanted to do," Codeville recalls. "It was very light [in terms of] memory consumption and didn't need a big processor."

"The technology was great for what we wanted to do."

Firefox OS didn't get the traction that Mozilla had hoped for, however. At the tail end of 2015, the company announced it would rework the platform around internet-of-things devices. "We will explore and prototype new use cases in the world of connected devices as an open-source project with a clear focus on the user benefit and experience," Mozilla's Ari Jaaksi said. The last mobile-centric version of Firefox OS was released in May 2016.

Undeterred, TCL kept working on its Firefox OS phone internally. Codeville saw potential in the platform and pitched his employer on a standalone company. "This is the way KaiOS was born," he said. 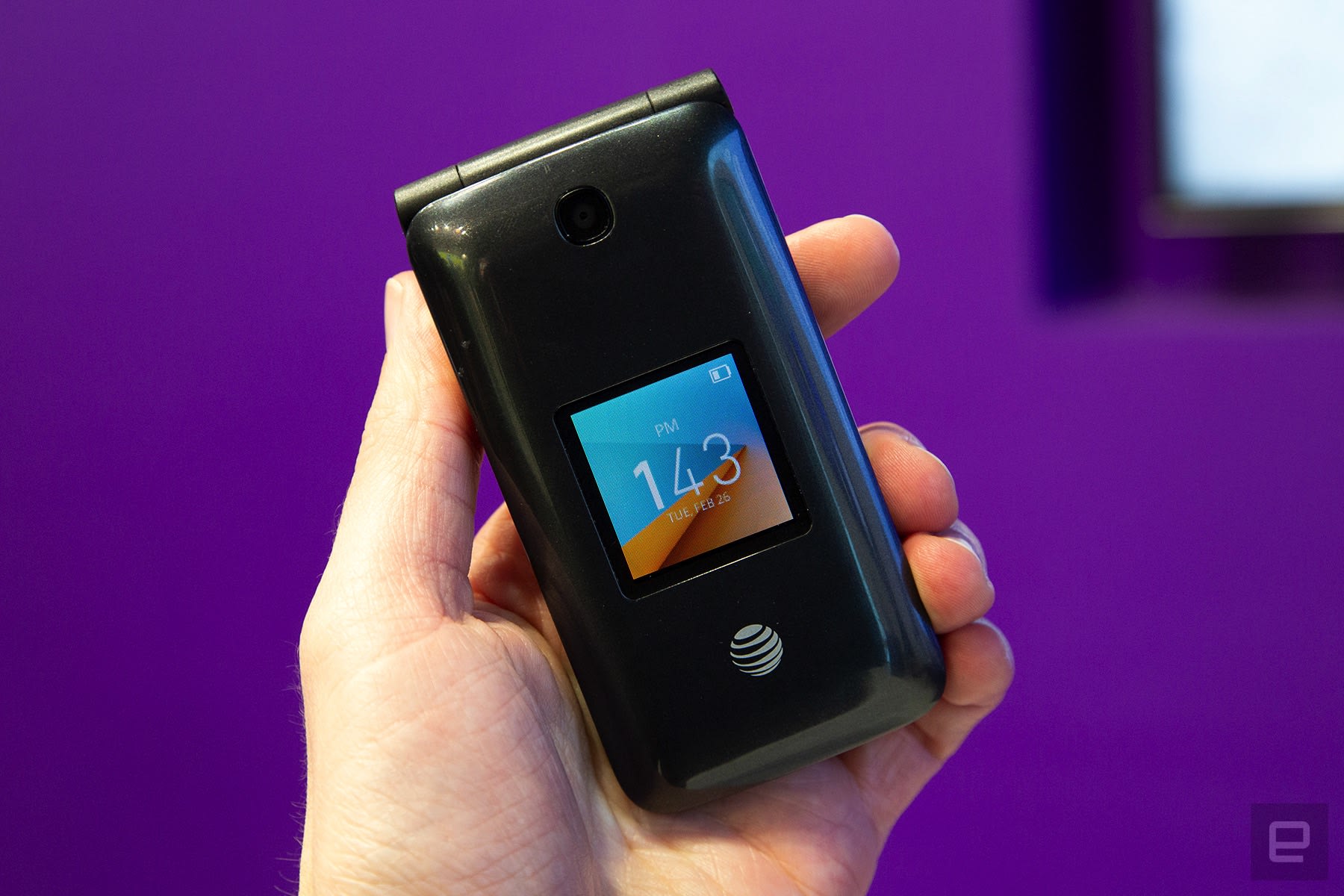 Codeville thinks Firefox OS failed because it was pitched as a smartphone platform. "When you go on the smartphone market you are immediately compared to Android," he said. "And when you don't have an ecosystem that is equivalent to Android, which is extremely rich, it's a bad comparison for the end user." People would buy a Firefox OS phone expecting the same power and app selection as a low-cost Android device. Mozilla didn't have the install base to sway app developers, and ultimately it disappointed consumers who wanted similar value for money.

A web-based platform, he thought, was better-suited to people who had never owned a smartphone. Customers who didn't have access to basic apps and would, instead, compare the platform to so-called dumb phones. "We bring them something that is much better than the 2G feature phones they currently own," Codeville said. "So when you look at user satisfaction, they're really happy because they see this as a step up. This is different from somebody who is moving from an Android smartphone, obviously."

Firefox OS gave the company a huge technological and, by extension, financial headstart. KaiOS hired 30 former Mozilla employees to help develop the platform. It also brought over "a lot of people" from TCL who had relationships and experience working with various smartphone companies, including network operators and chipset manufacturers.

"We bring them something that is much better than the 2G feature phones they currently own."

The operating system that emerged is quite different from Firefox OS. The user interface, for instance, is built around phones with physical keys and non-touch displays. The application icons are smaller and you'll often see a contextual strip at the bottom of the screen with physical input options such as "Cancel" and "Okay." KaiOS optimized the platform for low-end hardware -- it only requires 256MB of RAM to run -- and, crucially, kept support for modern connectivity such as 3G, 4G, WiFi, GPS and NFC.

Feature phones are normally associated with emerging markets such as India and Brazil. KaiOS, however, started in the US with the Alcatel-branded Go Flip. Codeville and his team persuaded AT&T, Sprint and T-Mobile to stock the handset because of their track record while working at TCL. Those deals then allowed the company to win a contract with Jio, a mobile network in India owned by a massive conglomerate called Reliance Industries. Together they built the JioPhone, a candy-bar-style device with a 2.4-inch display and 512MB of RAM. It was effectively given away with ultracompetitive 4G plans. 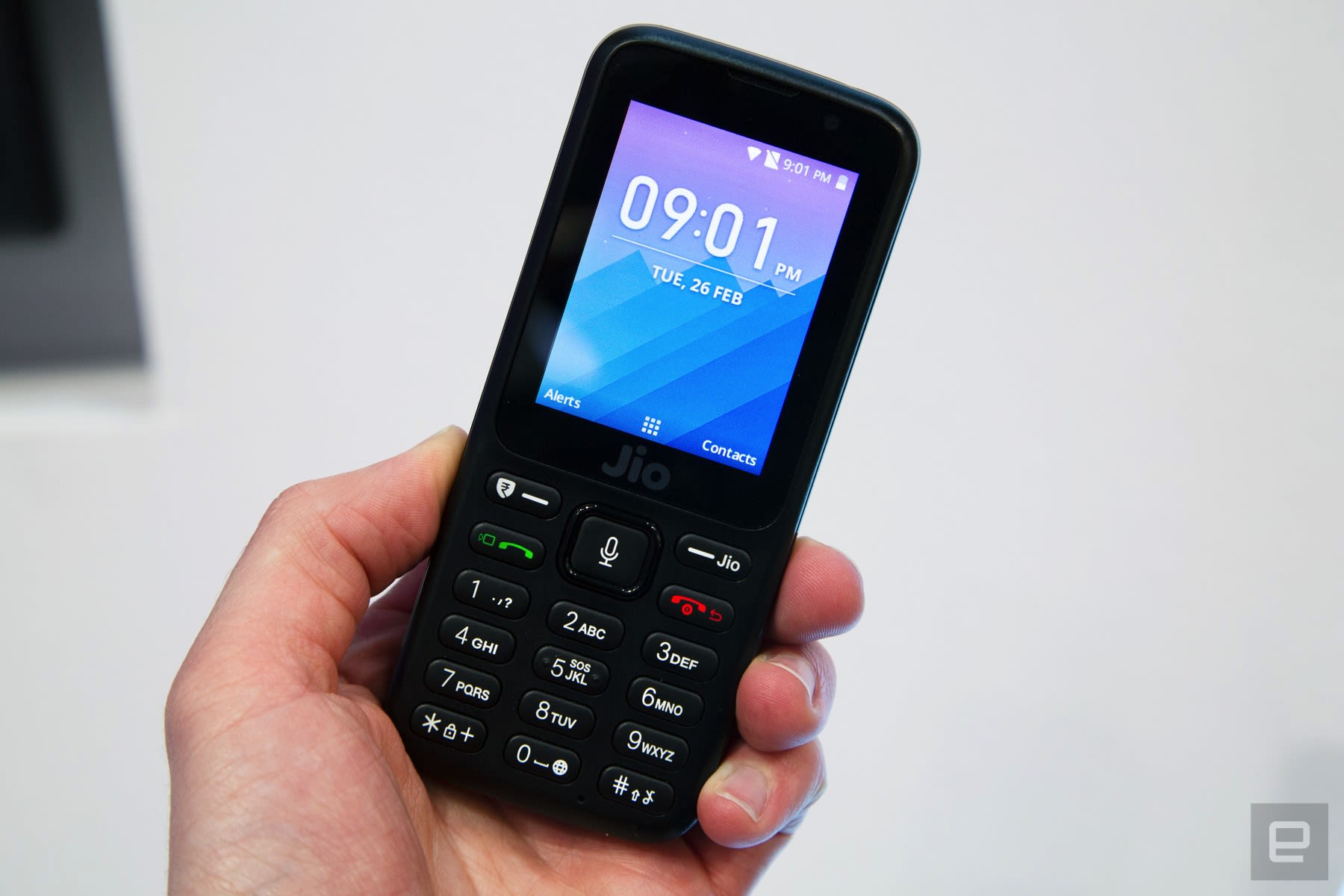 "This has been a huge success," Codeville said. "We have been shipping millions of devices."

The popularity of the JioPhone allowed KaiOS to court more network operators, chipset and device manufacturers. "And then everything went faster and faster," he added.

The company won a project with HMD Global, the new steward of the Nokia brand. The pair worked on the Nokia 8810 4G, an updated version of the iconic slider that came out in 1996 and was featured in The Matrix. The updated handset was unveiled at Mobile World Congress in last year and immediately grabbed headlines for its nostalgic design and intentionally primitive software.

At the same time, KaiOS announced partnerships with Facebook, Twitter and Airfind, a developer of news, weather and horoscope apps. It also inked a deal with Google that brought Google Maps, Search and the voice-enabled Assistant to the newly-announced Nokia 8110 4G.

"Everything went faster and faster."

These apps were huge for KaiOS; they legitimized the platform and made every phone feel smarter and more powerful to consumers. That, in turn, raised the perceived value of the usually low-cost hardware.

Google Assistant was a particularly important addition. For many, voice is faster way than pecking a classic one-through-nine keypad with their thumbs. The Assistant talks back, too, which makes the platform viable for people with poor literacy skills. 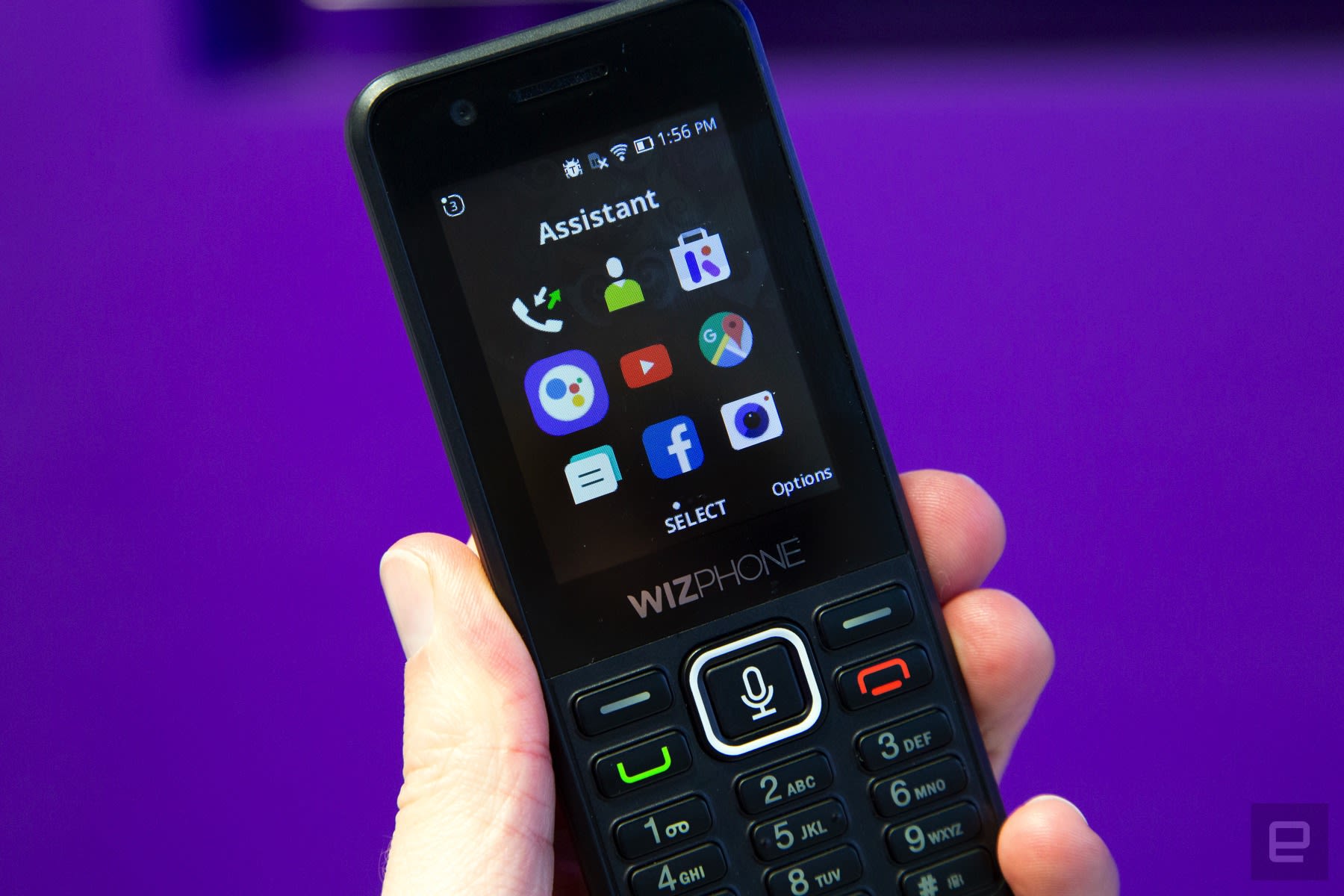 Four months later, KaiOS announced a $22 million funding round led by Google. As part of the agreement, the pair said it would work together to bring Google's key services to all KaiOS users -- not just banana phone owners. "This funding will help us fast-track development and global deployment of KaiOS-enabled smart feature phones, allowing us to connect the vast population that still cannot access the internet, especially in emerging markets," Codeville said.

Google's support was surprising. The company, after all, had tried to court emerging markets with Android One and its spiritual successor, Android Go. Both were conceived as lighter, stripped-back versions of Google's popular operating system. They were, however, fighting for popularity in the low-cost smartphone segment. KaiOS was operating on a different plane -- one with even cheaper components and price-tags where Google couldn't compete. Instead of fighting the platform, the company decided to embrace it and make some of its key software widely available to users.

"It's a completely new type of customer for Google."

The partnership was extraordinary when you consider that KaiOS is based on the bones of Firefox, a direct competitor to Google's Chrome. "KaiOS addresses people who are not using Android," Codeville explained, "and who are not using smartphones. So it's a completely new type of customer for [Google]."

In July 2018, the Doro 7060 flip phone launched in Europe. It was joined by the JioPhone 2, a larger handset with a Blackberry-style keyboard, the following month. By the end of the year, the Cat B35, Doro 7050 and MaxCom 241 had come out too. KaiOS was racking up sales and pushing its mobile footprint into more global markets.

Then, in December, KaiOS announced the WizPhone, a simple handset that will cost 99,000 IDR -- or US$7 -- in Indonesia. The surprisingly low cost is being subsidized by Alfamart, a convenience-store giant that sees a banking and ecommerce opportunity. The company will sell the WizPhone through vending machines across the country and give users benefits if they use the preloaded AllWiz app to scan and pay for physical products. 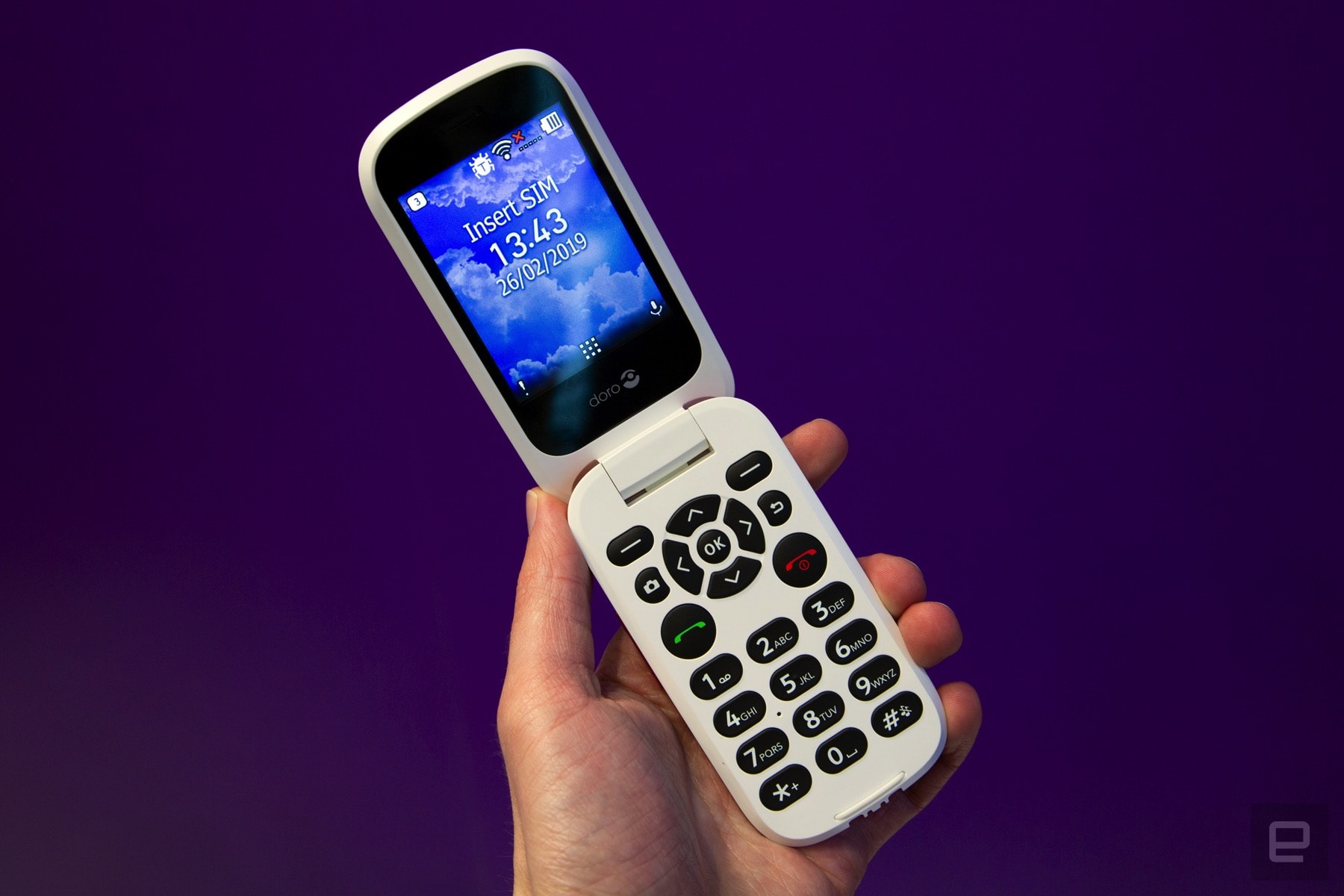 KaiOS is now finalizing a new funding round led by Cathay Innovation, a global venture capital fund. Codeville's company will use the extra money to expand into new markets, encourage a community of web-based app developers, and develop its own payment and advertising tools.

Google, meanwhile, is slowly improving the Assistant on KaiOS. At the moment, you have to open a specific app and hold down the microphone button to ask for something. A new voice-typing feature will allow users to navigate to a text box -- in any part of the operating system -- and transcribe a message with seamless speech-to-text. In addition, the Assistant will soon support "Actions" by third-party developers.

KaiOS has roughly 260 employees spread around the world. Roughly 150 are working on the product, including research and development, while another 70 support the company's carrier and OEM partners. The rest are split between marketing, finance and developing the broader platform.

"We would love to talk with Mozilla."

KaiOS isn't a household name just yet. Eighty million is an impressive install base, but it's a paltry figure compared with Android and iOS. The company, however, has done what Mozilla couldn't -- find an audience for a web-based mobile platform. Curiously, Codeville hasn't spoken with Mozilla about KaiOS or the legacy of Firefox OS. "We would love to talk with Mozilla, but not at this stage, no," he said.

Smartphones are, of course, the future for most people. KaiOS has shown that feature phones can still help usher swaths of people online. Especially if you can offer them for less than $10.