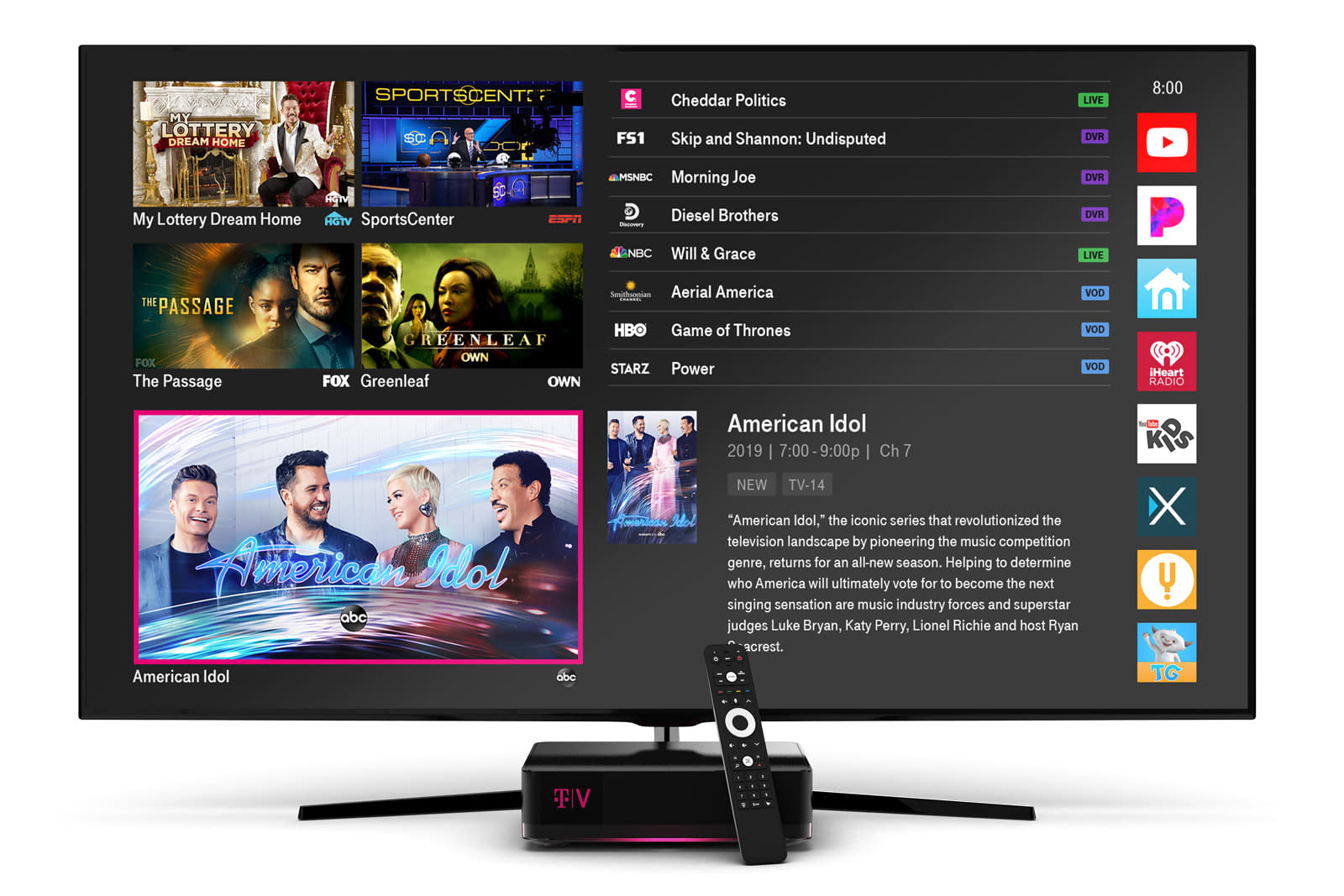 T-Mobile hasn't been quick to fulfill its promises of launching TV service, but it finally has something to show following all the early hype: it's launching TVision Home, a rebranded and retuned version of Layer3's broadband-based IPTV service. It's not the fully independent streaming service you might have hoped for (that's coming later in 2019). However, the telecom is hoping to bring a dash of its straightforward "Uncarrier" strategy to the TV world -- provided you're willing to pay.

To start, T-Mobile is bringing its no-shock billing to TV. You'll pay $100 per month ($90 if you're also a phone customer) for 150-plus channels and $10 per connected TV, but there are no hidden fees used to jack up the real price. The provider also claims it will avoid the usual "bill creep" where cable and satellite services gradually hike your costs even when you're under a contract. Your rate should stay the same unless you change it, T-Mobile said. You'll pay extra for premium material like HBO, Showtime and on-demand movies, although 4K channels are included as part of the base package.

It won't surprise you to hear that T-Mobile is playing up the tech angle. Its interface relies on AI-based (yes, it's very buzzwordy) recommendations that pay attention not just to what you're watching, but when and where. If you tend to watch a certain sitcom after dinner, you'll probably see that first. The 1TB DVR offers voice control through Alexa or Google Assistant, with hooks for your Facebook media library and smart home devices. It'll ship with apps for services like iHeartRadio and Pandora, while an Amazon Prime Video app is coming later in 2019. There's no Netflix app, at least not yet.

Service will be available on April 14th in Chicago, Dallas-Fort Worth, Los Angeles, Longmont (Colorado), New York City, Philadelphia, San Francisco and the Washington DC metro area. Everyone will get the $90 price "for a limited time."

Whether or not TVision Home succeeds isn't exactly clear. T-Mobile points out that its service costs less than the average cable or satellite bill (about $107), but you're still paying far more than you would if you ditched regular TV in favor of an over-the-top service like PlayStation Vue, Sling TV or YouTube TV. You have to rely on an existing home broadband link, remember. This is aimed at people who may be frustrated with incumbent TV providers, but aren't so frustrated that they want to drop service entirely in favor of purely internet-based services.

Update 4/10 3:27PM ET: We've clarified that the $90 price is after the discount for being a phone customer, not before. On the plus side, T-Mobile tells us that Netflix will indeed make an app available for its set-top box later in the year.

In this article: amazon, amazon prime video, av, gear, internet, iptv, layer 3, prime video, services, t-mobile, television, tv, tvision home, uncarrier, video
All products recommended by Engadget are selected by our editorial team, independent of our parent company. Some of our stories include affiliate links. If you buy something through one of these links, we may earn an affiliate commission.