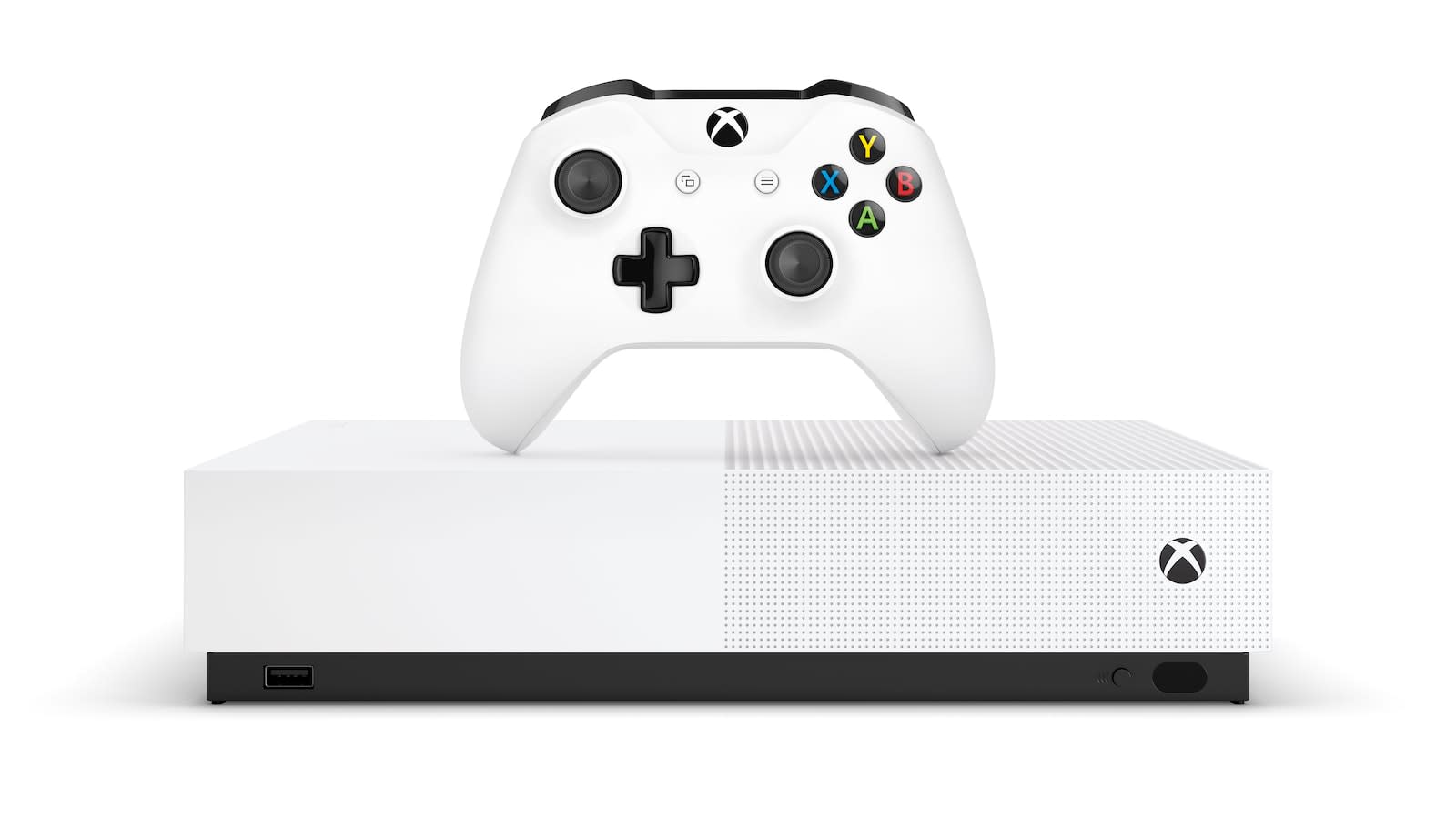 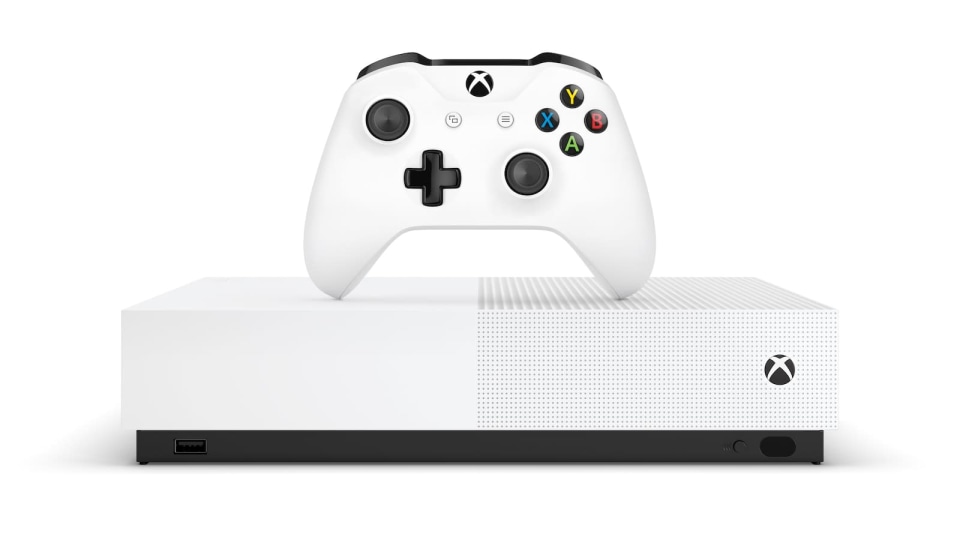 A disc-free, completely digital Xbox One is no longer just a rumored pipe dream for cord cutters and the current generation of Fortnite fanatics who've never had to set foot inside of a GameStop. The Xbox One S All-Digital Edition will hit retailers on May 7th for $250 (that's $50 less than the Xbox One S) and it's available for pre-order today.

The console comes with three popular, Microsoft-owned titles -- Sea of Thieves, Forza Horizon 3 and Minecraft -- and a special offer on Xbox Game Pass, the monthly subscription service that includes access to more than 100 games.

Hardware-wise, the All-Digital Edition is the Xbox One S minus the optical drive, meaning it doesn't play physical discs or Blu-ray. However, all of your Xbox One accessories and digitally purchased games and apps will work on the new console.

This baby has been a long time coming. Rumors of a disc-less Xbox One started bubbling late last year, and Microsoft has kept the intrigue alive by focusing on its digital ecosystems, such as Game Pass and Project xCloud, a game-streaming service set to enter beta in 2019. Microsoft is gearing up to compete with Google Stadia, an ambitious, social-media-focused service from the Big G that promises to stream games to any device at up to 4K and 60fps. Stadia is set to launch this year.

Microsoft isn't ready to roll out Project xCloud or any other streaming service just yet, but it's laying the groundwork for gaming's Netflix-style future. For Xbox, this means doubling down on subscription services. Monthly subscription fees are the backbone of businesses like Netflix and Hulu, generating billions of dollars for each company, and they'll be just as important to gaming companies in a digital-first marketplace.

In practice, this means players need to add the cost of actually getting online and accessing games to the price of the Xbox One S All-Digital Edition. Microsoft offers some online features to all players for free, including streaming apps and Skype, but multiplayer is locked behind the Xbox Live Gold paywall. The best deal on Xbox Live Gold is $60 for the year, or $5 per month.

Online multiplayer isn't an "extra" feature in many modern titles, but rather a core aspect of gameplay. Fortnite, Rocket League, PUBG, Overwatch, Counter-Strike: Global Offensive, Roblox, Rainbow Six: Siege and other top games of the day are online-only or online-focused. All three of the games bundled with the Xbox One S All-Digital Edition -- Sea of Thieves, Minecraft and Forza Horizon 3 -- require Gold to access their complete experiences. Xbox Live Gold, it could be argued, is essential for anyone who wants to fully enjoy the Xbox One S All-Digital Edition.

Plus, as a disc-less console, the All-Digital Edition is clearly a vessel for the Xbox Game Pass. For $10 a month ($120 a year), players get access to a library of more than 100 games, which they can then download and play as long as their subscription is active. Microsoft just combined this service with Xbox Live Gold in the Game Pass Ultimate bundle, which runs $15 a month ($180 per year). When everything is said and done, Game Pass Ultimate costs the same as an annual Gold subscription and monthly Game Pass access.

The Xbox One S All-Digital Edition is built for an online ecosystem, though it costs just a little bit extra to access its complete suite of online features. In response to Engadget's request for clarification about subscription services on the All-Digital Edition, a Microsoft spokesperson sent the following statement:

Yes, you'll need to purchase Xbox Live Gold just like you would on any other Xbox One console to access features like multiplayer, Games with Gold and Deals with Gold. The difference with the Xbox One S All-Digital Edition is that it does not come with an optical disc drive. The Xbox One S All-Digital Edition comes with a 1-month membership to Xbox Live Gold, so you can play on the most-advanced multiplayer network right out of the box.

The Xbox One S All-Digital Edition was built for disc-free gaming and entertainment. As part of the Xbox One family, you will have access to join exclusive Xbox memberships like Xbox Game Pass, Xbox Live Gold and take advantage of features like Xbox One Backward Compatibility.

The gaming industry is in a period of transition; major companies are attempting to tailor old business models to new scenarios. Online play wasn't a necessary or expected facet in most games until recent years. Hell, when Microsoft revealed the Xbox One in 2013, it tried to sell the new hardware as an "always-online" console and was ridiculed so harshly that it reversed course entirely, eventually releasing a more traditional box with less of a focus on digital features. With this hardware, and with online play still viewed as a premium experience, it made sense to charge extra for access to multiplayer or the cloud. It's a tougher sell post-Fortnite, with a console designed specifically for digital gaming.

Selling hardware and then charging for specific or expanded services isn't a new idea -- in fact, it's largely how the smartphone marketplace operates. The gaming hardware cycle is beginning to mirror this mobile landscape, thanks to an expanded broadband ecosystem, rapid advancements in hardware and the establishment of robust cloud networks, and subscriptions are bound to play a big role in this future.

In this article: av, gadgetry, gadgets, gaming, google stadia, microsoft, personal computing, personalcomputing, project xcloud, streaming, xbox one, xbox one s, xbox one s all-digital edition
All products recommended by Engadget are selected by our editorial team, independent of our parent company. Some of our stories include affiliate links. If you buy something through one of these links, we may earn an affiliate commission.