An ergonomically excellent laptop with plenty of power and a battery that’s too small.

When NVIDIA unveiled RTX ray-tracing GPUs for laptops, a lot of new models launched: 40 of them in all. Origin, a company best known for its customized models, tried to separate itself from the pack with an interesting hook. Rather than releasing a 15.6- or 17.1-inch model like everyone else, it unveiled something in between -- the 16.1-inch EVO16-S.

While packing a bigger screen, it's just as thin and no heavier than most 15.6-inch laptops, but much lighter than any 17.1-inch model. Packing up to a 9th-generation Intel six-core CPU and GeForce RTX 2080 Max-Q GPU, it crams in top-flight gaming performance and ray-tracing, to boot. The EVO16-S is also pretty well-priced compared to rival models with smaller screens, so let's find out how it measures up.

Since the larger screen is the EVO16-S's claim to fame, let's start there. I loved having that extra screen space, as it gave me more room for gaming and particularly video editing. The 144Hz refresh rate makes gaming very fluid and artifact-free.

Origin doesn't offer any 4K, 240 Hz 1080p or new-fangled OLED displays for the EVO16-S. And the display, with 1080p resolution and 75 percent Adobe RGB coverag doesn't stack up to the Aero 15-Y9 and MSI's GS65 laptops in terms of color accuracy for content creation. The reason for this is likely because there are few 16.1-inch laptops out there, limiting the supply of display panels available to Origin.

Still, you can get it factory calibrated (for a price), and the larger screen size means you won't need to squint as much when doing video editing and other chores. It pumps out a decent 300 nits of brightness, well above most laptops, but below the 400 nits for the Razer Blade Stealth and Aero 15-Y9. Still, that's easily enough to handle most gaming and entertainment tasks.

At 4.6 pounds, the EVO16-S is light for a 15.6-inch laptop, let alone a 16.1-inch model. However, it has surprisingly large bezels all the way around. That means it's pretty wide at 14.9-inches (compared to 14.1 inches for Aero 15 and 13.9 inches for the Razer Blade Pro) barely fitting into my Peak Design messenger bag. If size, rather than just weight, is important, that's something you'll need to consider.

The bonus of the larger bezels is that Origin was able to put the webcam at the top, rather than elsewhere. That means I could actually use it, unlike the "nostril cam" installed at the bottom of Gigabyte's Aero 15-Y9. This has been an issue lately with recent small bezel laptops, so it's good to see Origin taking a stand here.

I really like the design of EVO16-S, as it's understated with a few gaming touches. That includes a bright red cover with subtle accents, a triangular power button, a multi-color, fully programmable backlit keyboard and Origin's circular logo in place of the "O" key. Cute.

Overall, it feels quite solid except for a slight amount of creaking when you flex the display. I'd put that down to the larger screen size more than any build problem, though.

Origin has done a good job with the ports, offering two high-speed USB 3.1 Type-C ports (one with Thunderbolt and the other with DisplayPort support), two SuperSpeed USB 3.1 ports, DisplayPort, a UHS III media card reader, ethernet port and separate headphone and microphone ports. I tested it with a range of peripherals, including UHS II SD cards, a 4K HDR monitor, and USB 3.1 SSD hard drives. All of them ran at their rated speeds. 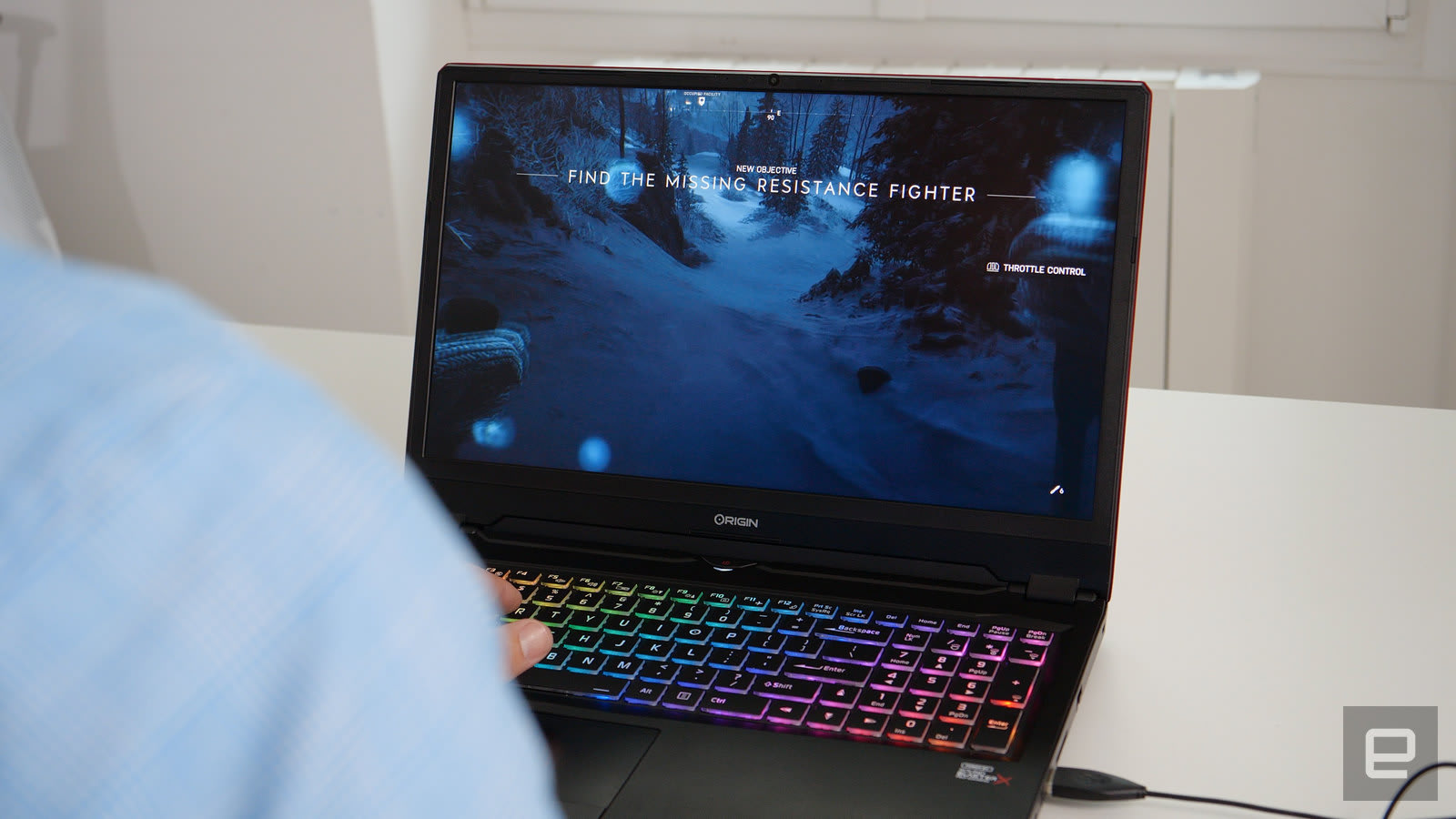 While it fell slightly below the Gigabyte Aero 15-Y9 in terms of benchmark performance, it gamed like a champ. Playing Shadow of the Tomb Raider, it hit 35 fps in HDR mode on a 4K external monitor, with both ray-tracing and DLSS enabled. With the same settings enabled at 1080p on the built-in display, it managed 60 fps.

Hitman 2 played at 33.5 fps with the same settings at 4K and 50 fps at 1080p. Overwatch, meanwhile, hit over 130 fps at 1080p, while Forza Horizon 4 played at 80 fps at the same resolution. Thanks to the 144 Hz refresh rate, games always played smoothly with no tearing or artifacts. Colors looked bright and punchy, too.

While I was gaming, the EVO16-S would kick up a moderate, but not annoying, amount of noise, about the same as the Aero 15-Y9. I never found it got too hot, either, even after a lengthy gaming session. Here, the slightly larger body is an advantage, allowing more room for cooling.

With an RTX 2080 Max-Q GPU, it can handle ray-tracing and DLSS anti-aliasing without taking a hit in performance. That applies to the few games that support the feature, like Battlefield V and Shadow of Tomb Raider. If you don't care about that, you can spend a lot less (like, half) to get laptops with NVIDIA's all-new GTX 1660 Ti GPU.

For content creation chores, the RTX 2080 Max-Q is a big improvement over the last-generation GTX tech, however. HEVC/H.264 rendering happens nearly twice as fast and Adobe Premiere is more responsive. I also found that other tasks, like photo resizing and exporting from Lightroom were three to four times quicker than on my GTX 1070 Max-Q powered laptop. The RTX GPUs can also handle 8K video, should you ever need to play or work with that.

The 16.1-inch screen is, again, great for entertainment, too. 1080p is more than sufficient for Netflix and other content, as you don't really gain much with 4K on a screen that small. The built-in speakers are slightly better than on other laptops I've tried, though they're obviously no substitute for a good set of speakers or headphones. 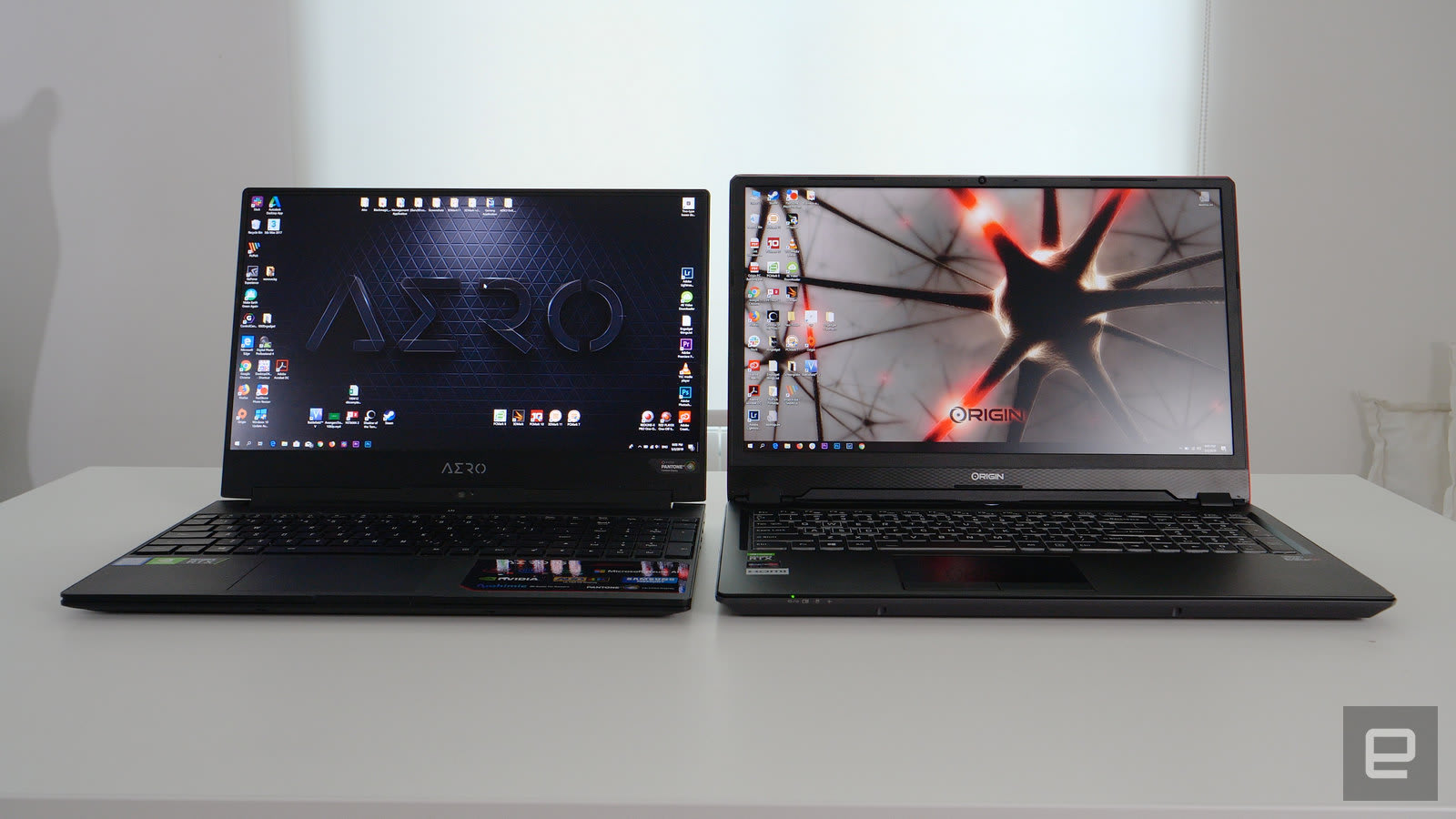 Windows laptops have a well-earned reputation for poor trackpads, but I was impressed with the EVO16-S in that regard. It has separate buttons for right and left clicking, with just the right amount of force needed. That's unlike the Aero touchpad buttons, which are a bit stiff. Scrolling and mousing is also smooth and accurate.

The keyboard has more travel than my Aero 15X, with an ever-so-slightly mushy feel. However, it didn't impede my touch-typing, nor cause any errors. Depending on your preferences for gaming, you might prefer a slightly clickier keyboard, however.

The weakest point on the Origin EVO16-S is the battery. It's just a 62Wh model that's much smaller than the optional 90Wh battery on the Alienware m15 or the Aero 15-Y9's huge 94Wh battery. That certainly made it lighter, but I was only able to get 5 hours in the battery rundown test, when looping a video continuously. With regular usage, I got about 4 hours of usage, and of course, gaming will further reduce that figure significantly.

As such, you'll need to carry the power adapter for serious gaming sessions, but there's good news in that regard. The EVO16-S has a smaller and lighter power brick than most other gaming laptops. 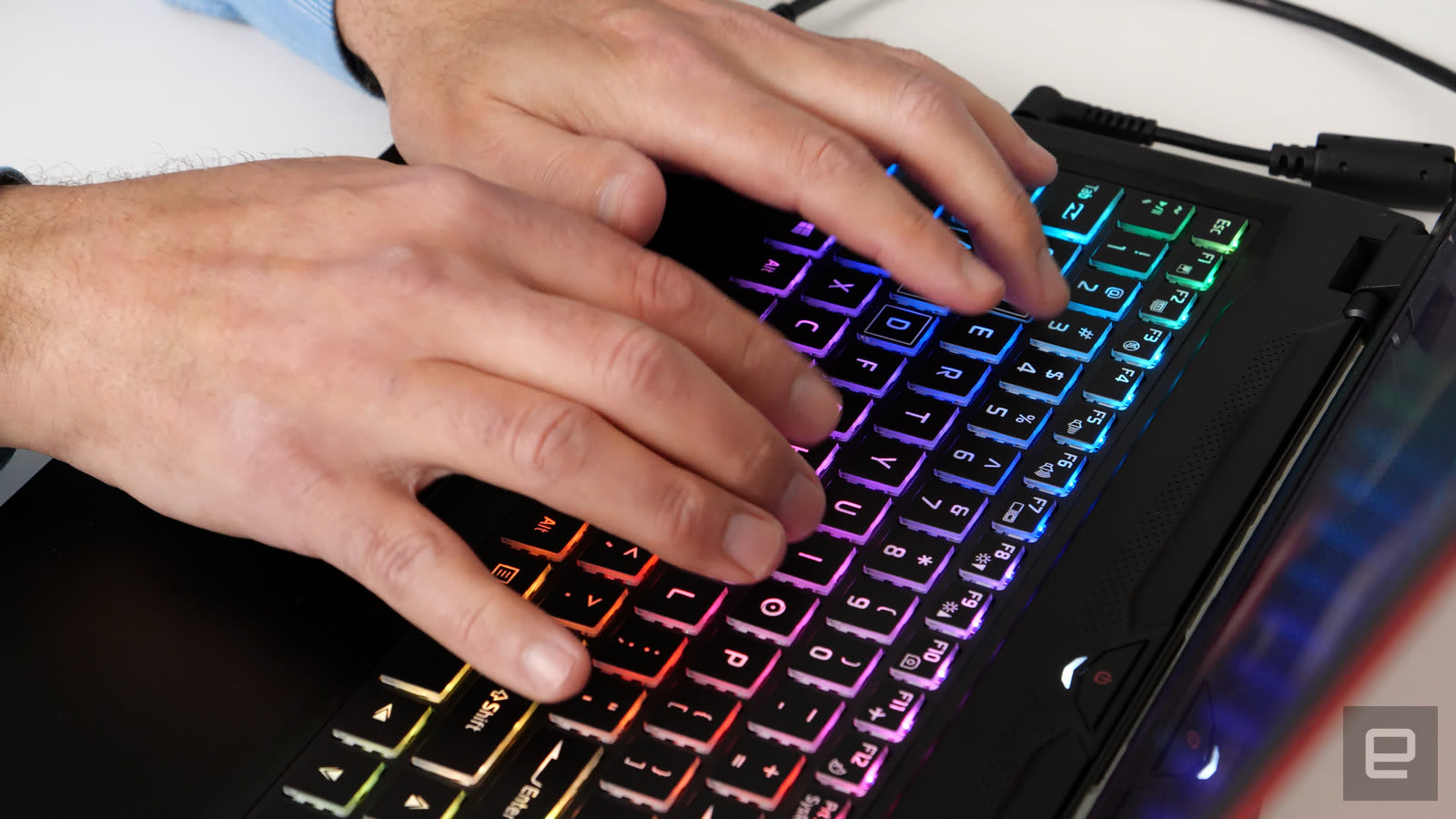 That compares to $1,999 at the bottom end for a similarly equipped Razer Blade base model with a 65Wh battery, and $2,999 for the top end model with the same specs and a larger (80Wh) battery. Both laptops weigh the same at 4.6 pounds, though the Origin model has a larger display, obviously.

The Origin EVO16-S offers outstanding performance and a competitive price, is well built, and has a surprisingly good touchpad. It's also stylish and understated, with just enough gaming touches to make a statement. And for even heavy gaming or video editing, it handled everything I could throw at it. The only drawback is that below-average battery life. Overall, it's a great option for gamers or content creators who want a screen size larger than 15.6 inches, but don't want to be burdened by a heavy 17.1-inch laptop.