Big caveat: It’s not fully ready for prime time yet.

When you name a product Project Limitless, it better truly have no limits. But the 5G laptop that Lenovo so boldly named and teased here at Computex 2019 was precisely the opposite: limited. Granted, this was a prototype device that isn't entirely ready, but we still wanted to get an early preview of what it's promising when it launches. Lenovo and Qualcomm don't have many details to share, other than the fact that Limitless will use a Snapdragon 8cx chipset and support 5G connectivity.

The Snapdragon 8cx was unveiled last December, promising "extreme" performance and battery life for Windows on ARM devices. It was designed to address a lot of the concerns people have had with Snapdragon PCs, particularly around performance. In particular, the octa-core Kryo 495 CPU on the chipset carries an increased 10MB cache so it can run Chrome better than its predecessors. Thanks to its 7nm architecture, the Snapdragon 8cx is also supposed to be much more power efficient than the Snapdragon 850, promising days of juice rather than hours.

We still haven't been able to verify any of those claims in the real world, but we continued to get more demos of how powerful the 8cx is supposed to be. Here in Taiwan, Qualcomm again showcased a reference design laptop with the "extreme" chipset pushing out streaming to two 4K displays in addition to its own screen. (To be clear, it wasn't the Project Limitless device that was running this demo.)

We saw a similar setup when the CPU was announced at Hawaii, and this time, the system seems more stable. I was able to adjust a picture's hue and saturation on Photoshop CC while the reference laptop ran Edge, PowerPoint, Excel and a video on the external displays. The reference laptop was slightly laggy in applying the edits, but otherwise held up.

The Project Limitless 5G laptop was set up in a separate station showing off its connection to a specially set-up sub-6GHz network. Since real-world speeds can't be tested yet, there wasn't much we could do to try out the Limitless' abilities here. 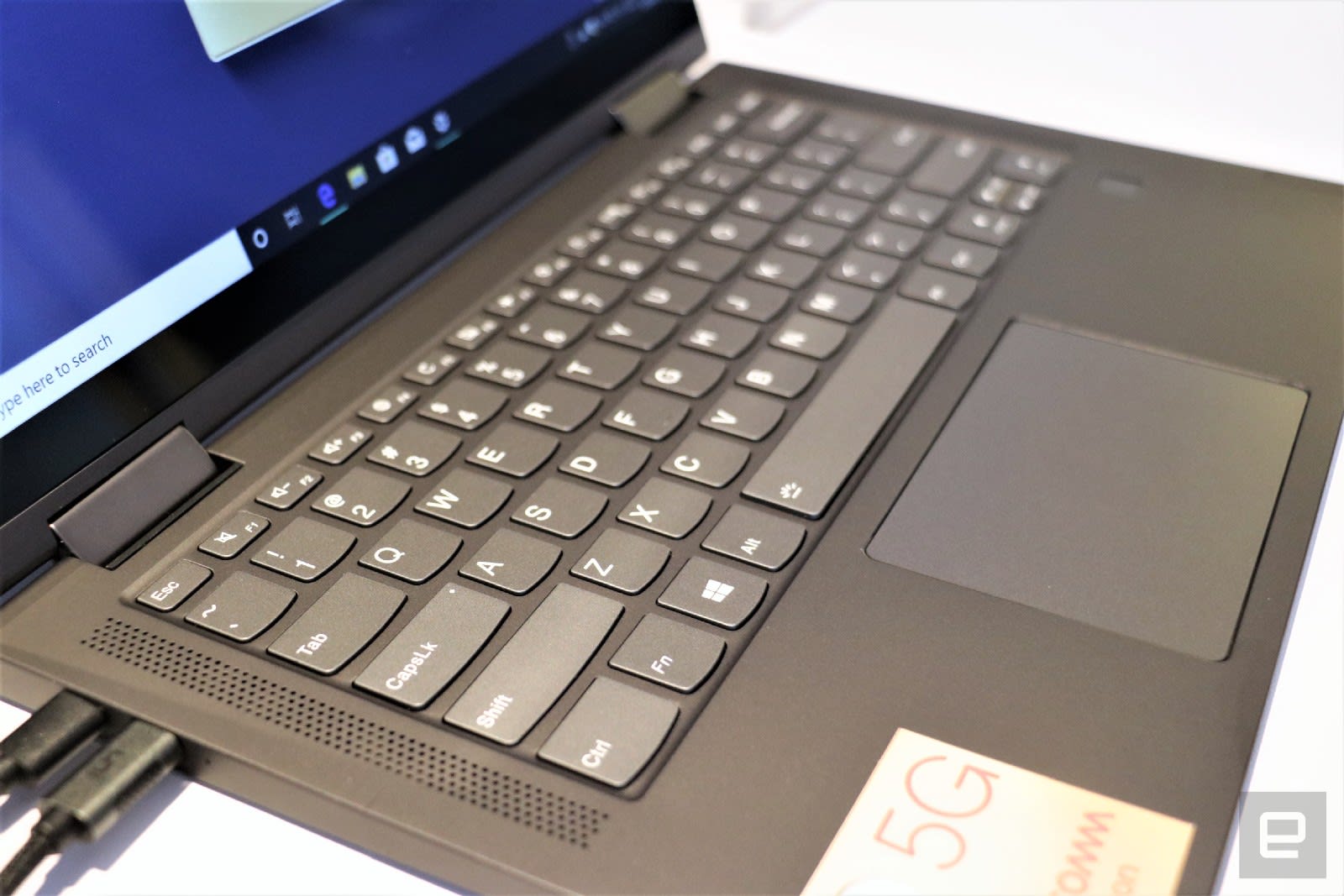 I typed a few sentences into a browser's address bar and found the keyboard offered relatively shallow travel. That's surprising since the Limitless unit we saw was not a thin-and-light device like a ThinkPad X1 Carbon or a Yoga -- there seemed to be plenty of room for deeper keys. It also had a pretty bland design with a dark gray finish. In fact, the whole thing looked so generic I actually mistook it for a reference design made by Qualcomm at first.

According to the preview device's system settings, the Snapdragon 8cx CPU was running at 2.8GHz and that it had about 16GB of RAM, which together should offer reliable multitasking performance.

Qualcomm also provided reference benchmarks to demonstrate how the Snapdragon 8cx compares to its main competitor -- Intel's Core i5-8250U. Using the newly announced PCMark 10 Applications benchmark on similar systems, Qualcomm's results showed that the 8cx beat the i5 on apps like Microsoft Edge and Word. Intel had the upper hand on Excel and PowerPoint, though. 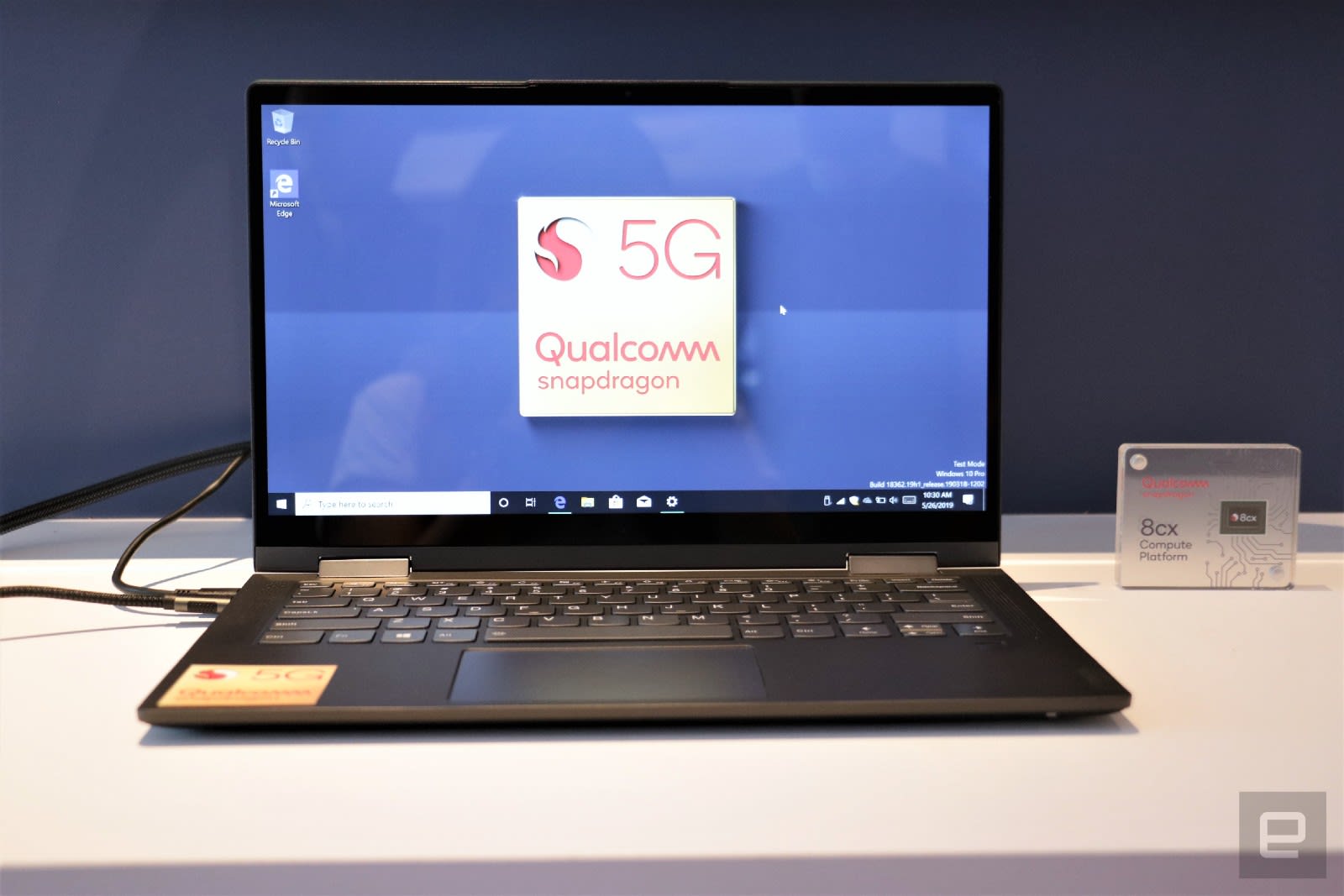 Speaking of apps, one of the greatest drawbacks of a Snapdragon PC was its limited app compatibility. Although Microsoft and Qualcomm have done a lot to make it easy for developers to recompile their apps for the system, native ARM apps are still few compared to x86 versions. This means that programs that don't have an ARM option, like Photoshop CC, for example, will be run on an emulator in the Windows OS. From my experience, this always felt slightly sluggish on older Windows on Snapdragon (WoS) devices like the ASUS NovaGo. According to Qualcomm, the 8cx is supposed to be so fast you won't notice this emulator lag. I haven't seen this in action yet, though.

Where Qualcomm has an obvious advantage is battery life, something it has delivered in previous Snapdragon PCs. On PCMark's new battery life test, the Snapdragon 8cx rig consistently clocked seven to eight hours more than the Intel one. To be fair, though, the latter sports a higher res 2K display compared to Qualcomm's Full HD screen.

You might have noticed, but for something named Project Limitless, Lenovo's 5G laptop has a lot of caveats. Admittedly, what we checked out was an early prototype and there's every chance that the eventual product will indeed overcome all the obstacles in its way to being truly limitless. But given the lingering concerns over app compatibility, the unexciting design and shallow keyboard, I'm not going to get too excited just yet. Lenovo and Qualcomm promised more information for consumers in 2020. While I'm stoked for 5G PCs in general, I'm just not confident this first-generation product is going to be the 5G laptop I've been waiting for.