When I first started playing guitar way back in 1995 (or maybe it was 1994?) the idea of a digital multi-effects pedal was still pretty new. The Zoom 505 was the biggest game in town, if you wanted a pile of effects in a compact package for a reasonable price. It was also the first pedal I ever bought. But, if I'm being honest, a lot of the sounds you got out of it were not great. And it could be a little confusing to operate at times.

Thankfully things have come a long way since the mid '90s.

Digital effects can often compete with their analog counterparts now. And even cheap processors are powerful enough to handle multiple effects simultaneously in a live audio application. These are also usually the first stop for a budding guitarist. Your average 16-year-old starting their first band can't go out and buy half a dozen pedals from the likes of Earthquaker Devices, JHS or even a relatively affordable stalwart like Electro Harmonix. So I decided to go back and check out a bunch of entry-level multi-effects pedals from Zoom, Line 6, Digitech and Mooer to figure out where a new guitarist should spend their cash.

When deciding which pedal was the best for a beginner I took a number of things into consideration. Obviously, one of the most important was the quality of the effects. Even a $20 unit is a waste of money if it sounds like garbage. Another is versatility. While the MS-70CDR from Zoom is pretty well regarded (and a pedal I've been eyeing recently), it focuses on chorus, delay, and reverb only. And lastly there's price. There are a ton of absolutely amazing multi-effects units out there, like the H9 family from Eventide, but those start at $400. That's way more than any guitarist still learning the ropes should spend.

We decided $200 was the absolute ceiling when it came to an entry-level device. And after months of testing, I'm comfortable saying that the Zoom G1X Four is the best choice for a novice guitarist. At only $100 it's a heck of a bargain. And while the G1 Four can be had for just $80, I think it's more than worth it to drop the extra $20 and get the model with an expression pedal. It'll be a huge help for filter effects like wah; volume swells if you're dabbling in shoe gaze; or pitch shifting if you want to get real weird. 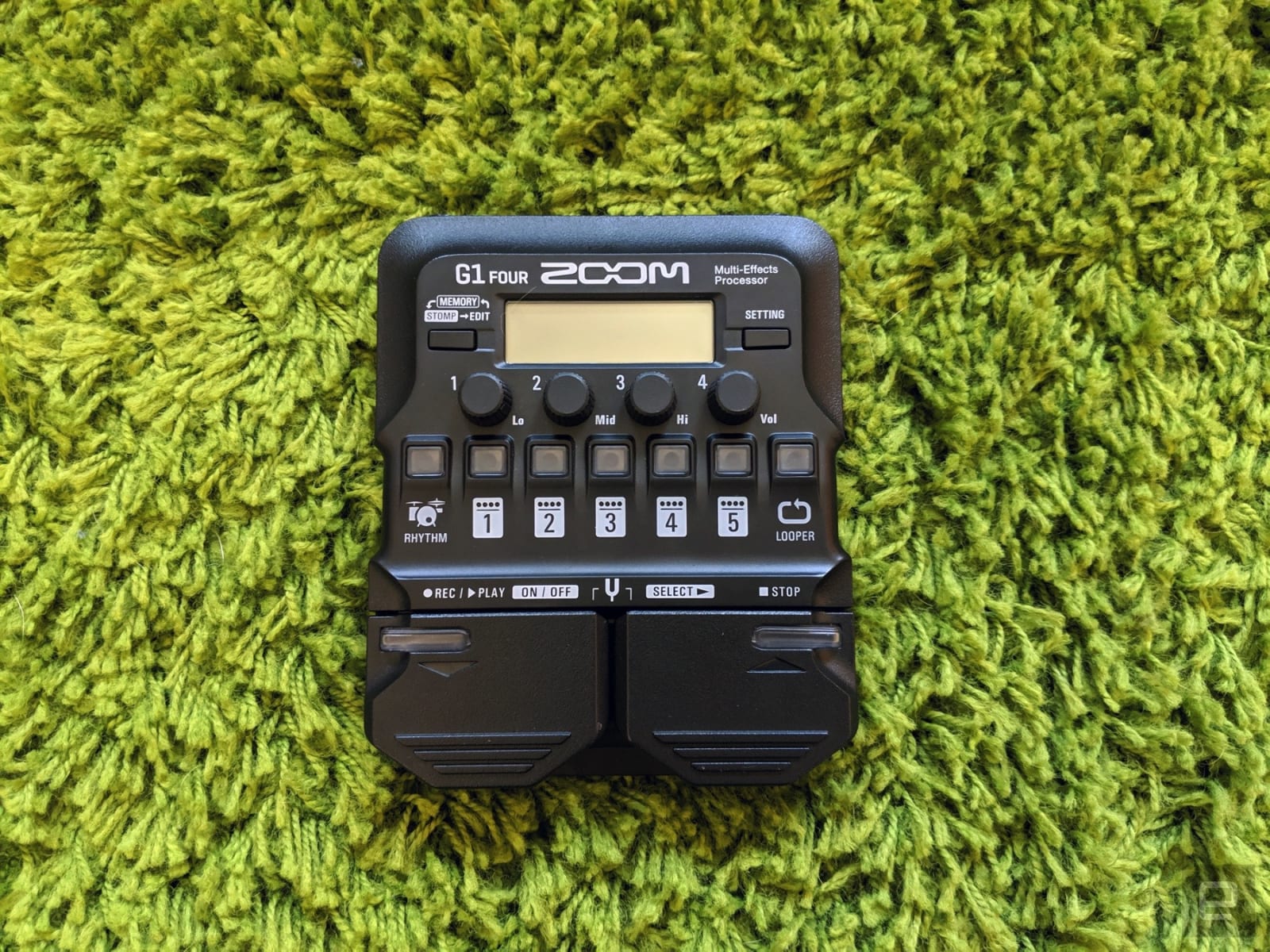 (Full transparency, I tested the G1 Four and not the G1X Four. But the two devices are almost identical except for the addition of an expression pedal and a few extra effects that take advantage of it.)

First and foremost: Most of the effects here are pretty good. Not all of them are useful ("Bomber" in particular is a head scratcher). And some are, shall we say, a little sterile sounding -- especially the overdrives and distortions. But on the whole it's a solid sounding pedal, especially for the price. The reverbs and delays aren't bad at all, and should please even more demanding players. And the chorus options, while not exactly faithful recreations of the pedals that inspired them, are more than usable.

There's over 70 effects built into the G1X Four. Plus 13 amp models and even speaker cabinet simulations. The latter are really designed for using with headphones, but you can shape your tone in interesting ways by using them in front of your own amp. Even if you can only find a few effects you really enjoy (and it's almost impossible not to), you're still getting your money's worth. One piece of advice though: ignore the pre-made patches that are loaded in 40 of the 50 save slots by default. Most are kinda cheesy sounding and frankly don't showcase the best side of the pedal. (Almost all of them have just a touch too much delay for some reason.) 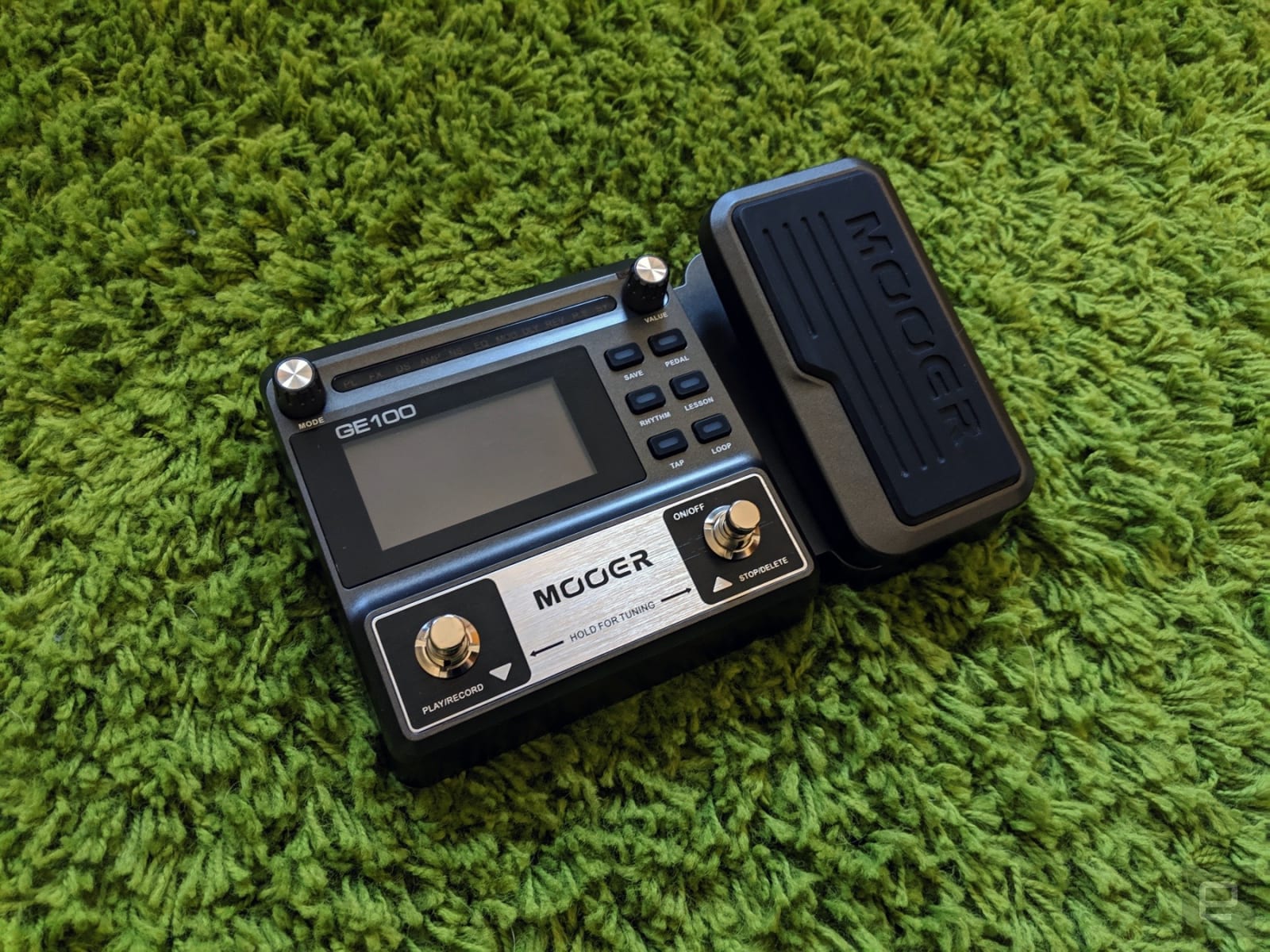 All this being said, the effects here aren't significantly better or worse than what you get in other pedals in the price range. The Mooer GE100 and Digitech Element XP, for example, do some things better and others slightly worse. The Digitech might take a very slight edge in terms of pure quality of the effects (especially if you focus on the out-of-the-box patches and distortion), but not enough to make you stand up and notice.

Where the Zoom really beats the competition is on ease of use and features. It has more effects (which you can chain together in any order you choose), more amp models and a desktop app that makes building patches and saving them a breeze. While navigating, tweaking and combining effects on the pedal itself is relatively intuitive, doing it on a desktop is quite a bit faster. And that extra bit of speed will make finding your way around the almost endless combinations much less tedious. I'm in no way suggesting you keep this thing tethered to you computer. That sounds like a nightmare. But you can pull together at bunch of custom patches, load them on the Zoom and never look back.

And honestly, even without the app it's far easier to use than the previously mentioned Mooer and Digitech pedals, or some of Zoom's more expensive models like the G3Xn. The interface is richer that the simple-to-a-fault Element XP and more logical than the GE100. I never found a need to look at a manual when using the G1X Four, which is more than I can say for most of the other units I tried. 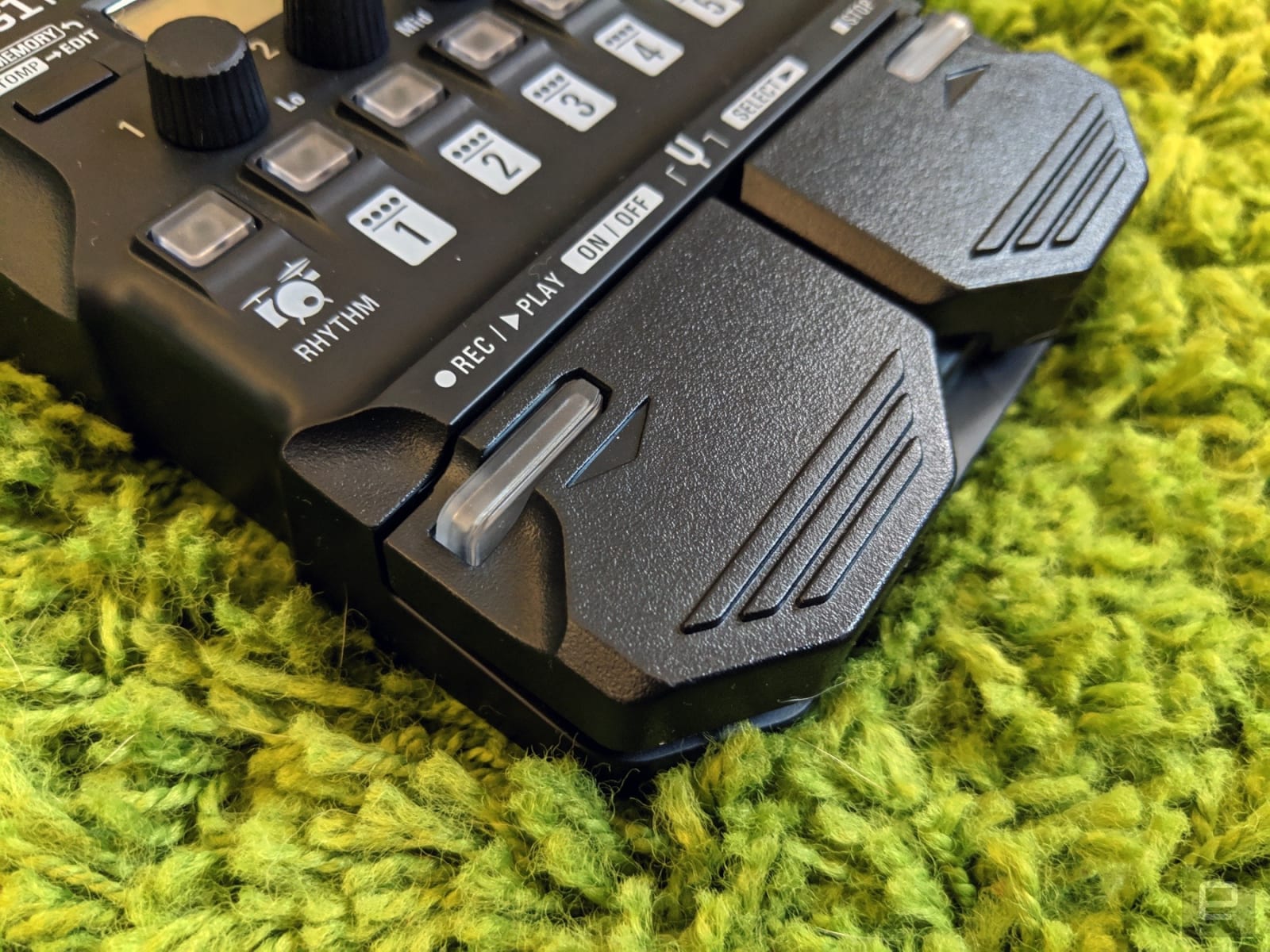 Add in a tuner, a 30-second looper and 68 rhythm patterns to practice alongside, and you've got basically the complete package for anyone still in the exploratory phase of their guitar playing. The biggest weakness of the G1X Four is the build quality. Now, to be clear, no $100 multi-effects pedal is built to withstand the rigors of tour life. In fact, most aren't really meant to leave your bedroom. But the Zoom feels particularly flimsy, especially with its plastic foot switches. That being said, I beat the hell out of my Zoom 505 from the mid '90s until the early aughts, and it was still kicking when I finally gave it to a friend. So I have no reason to believe the G1X Four will break easily. Just don't expect rugged metal construction here. 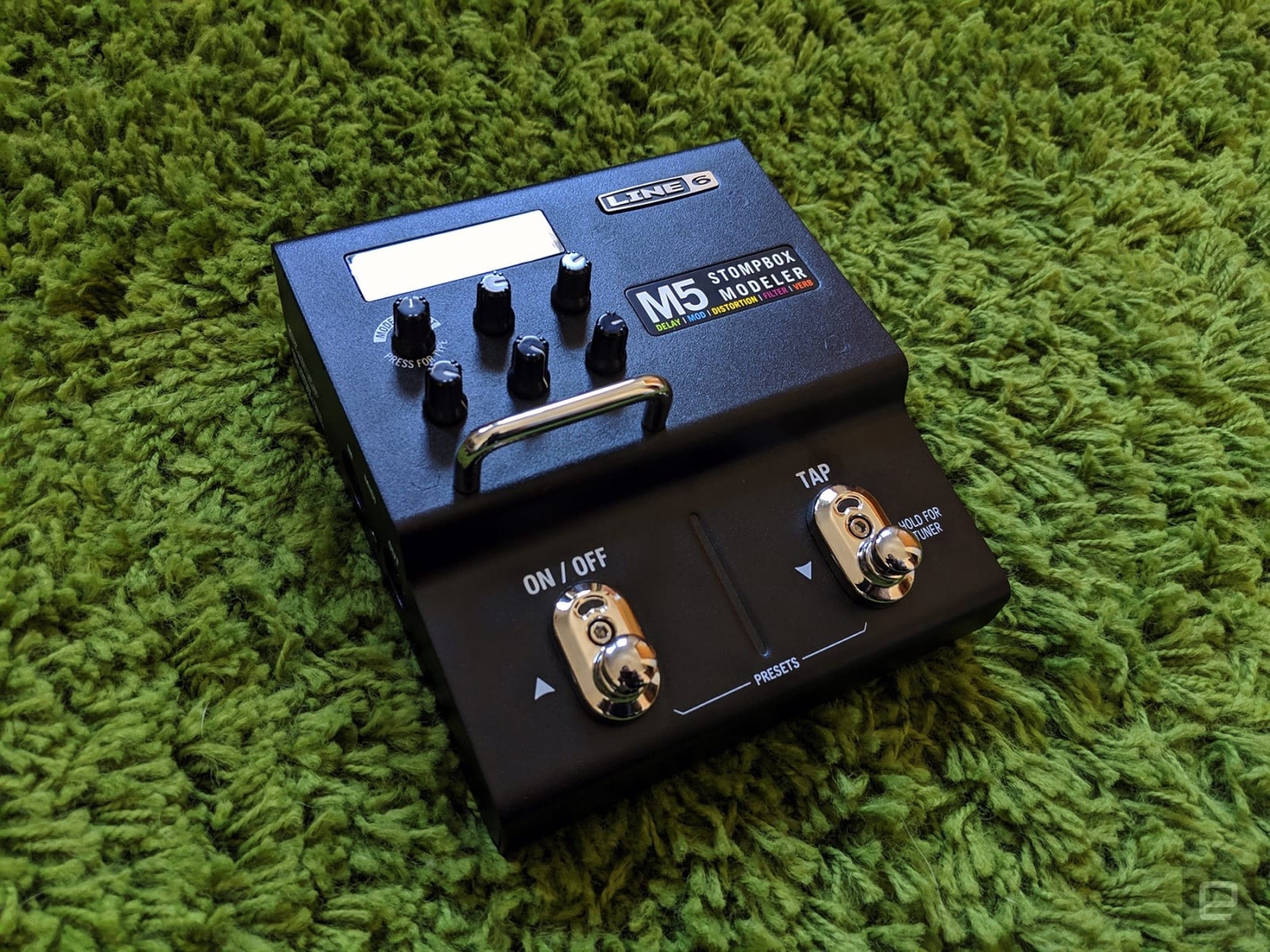 Now there is one last thing to consider. Many modern amps like the Fender Mustang series and Boss' Katana line have plenty of built-in effects. If you own one of these, and you're more interested in expanding your sonic palette than just layering on as many effects as possible, I have another option for you: the Line 6 M5. It's a little more expensive at $150 and you can only use one effect at a time, unlike the Zoom where you can stack five or nine with the Digitech. (It's a "stompbox modeler" as opposed to a proper multi-effects pedal.) But, the quality of that one effect is going to be well beyond what the other pedals mentioned here can produce. And, since it's built like a tank, it has a good chance of finding a permanent place on your pedal board.