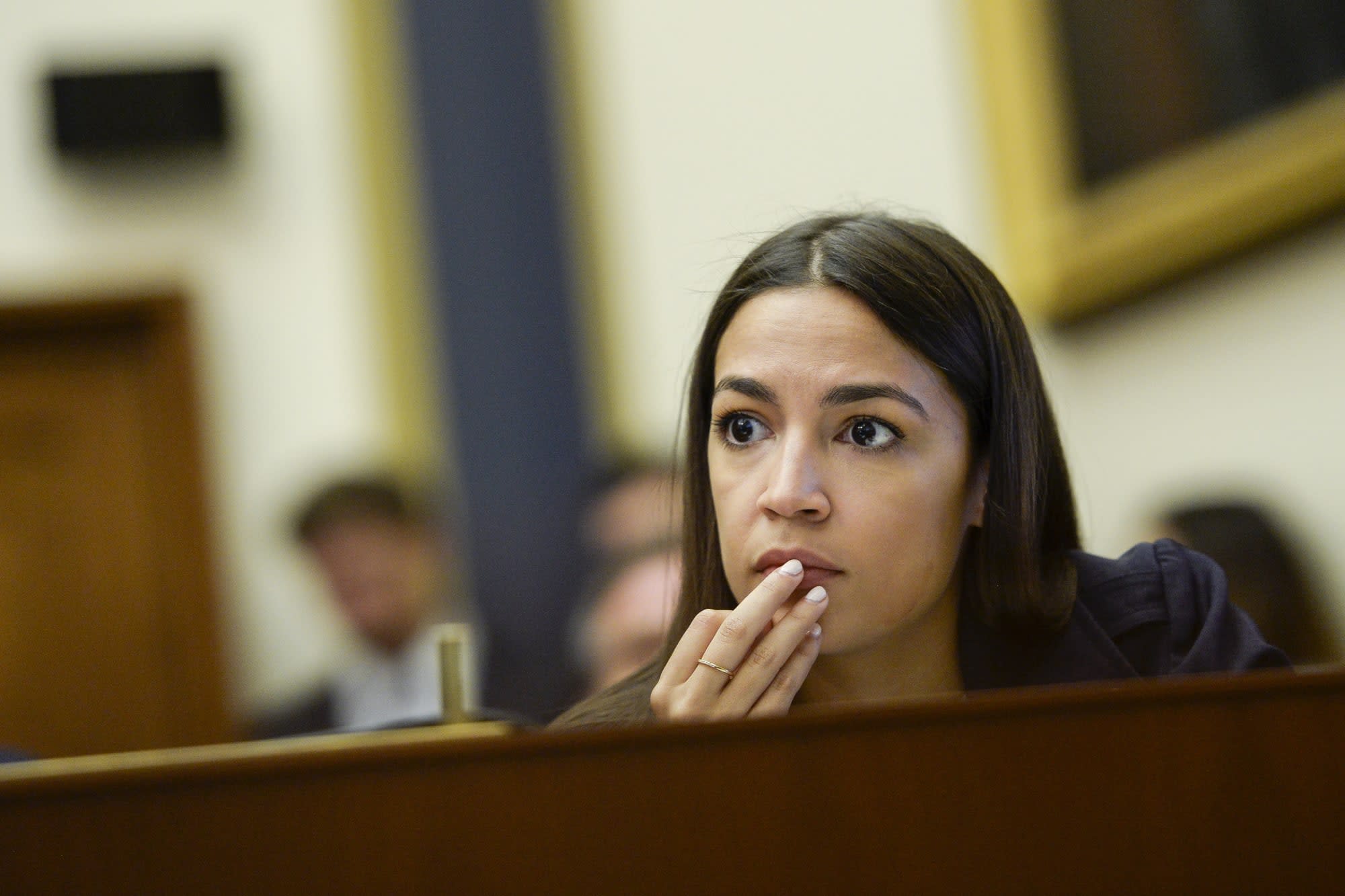 Two critics of Rep. Alexandria Ocasio-Cortez who were blocked by the lawmaker on Twitter are now suing her. New York congressional candidate Joseph Saladino and former New York State Assemblyman Dov Hinkind on Tuesday filed separate lawsuits against Rep. Ocasio-Cortez, in reaction to this week's federal court ruling barring President Donald Trump from blocking his own critics on the platform. Both men announced their lawsuits (both filed in federal courts in New York) on Twitter, with Saladino including a video of him filling out the claim.

In the lawsuits, both men allege that they were blocked by Rep. Ocasio-Cortez on Twitter after criticizing her on the platform. "Alexandria Ocasio-Cortez blocked me from viewing and engaging with her official Twitter profile after I responded to one of her political posts," wrote Saladino under the lawsuit's statement of claim. Hikind claims that the New York congresswoman blocked him after he was critical of her on Twitter, and mentions other critics that she's also blocked, such as conservative journalist Ryan Saavedra. The former lawmaker has done his fair share of blocking his own critics. Albany Times Union reporter Chris Bragg tweeted that Hikind blocked him in 2014 -- while he was in office -- after the journalist wrote a critical article.

Over the past year, federal courts have considered whether President Donald Trump -- and by extension, all public officials -- have a right to block critics on a public forum like Twitter. Overwhelmingly, the consensus of the courts has been that access to a politician on social media is, in fact, a constitutional right. Back in January, the Fourth Circuit Court of Appeals ruled that a public official's Facebook page is a public forum, so public officials cannot block people for their opinions. This week's ruling from the US Court of Appeals for the Second Circuit concurred with that ruling.

Even before the Trump ruling, courts were siding with the public on the banning rights of elected officials. Back in 2018, the ACLU and the Maryland Board of Public Works reached a settlement in a social media banning lawsuit against Maryland Governor Larry Hogan. Hogan was forced to create a new social media policy for his Facebook page, as well as create an appeals process for constituents who feel that they were wrongfully blocked or that their comments were improperly deleted. The ACLU has also been sending letters to politicians around the country, warning them to unblock people on social media. "The fact that a public official disagrees with you on an issue doesn't mean she can silence you. Indeed, it means the opposite — and that holds true whether you're speaking out in a public park, at a town hall meeting, or on a Facebook page," wrote ACLU staff attorney Vera Eidelman in a blog post earlier this year.

The office of Rep. Alexandria Ocasio-Cortez hasn't responded to a request for comment, so it's unclear how they will respond to the lawsuits -- but both Saladino and Hinkind state in their lawsuits that they seek to be unblocked by Ocasio-Cortez.

Attorney John Browning, who teaches a course on the role of social media in the law at Southern Methodist University, think the lawsuits have merit. Browning cited both the Second Circuit and Fourth Circuit rulings, as well as previous and ongoing cases in which public officials are being sued for blocking users. Back in May, the US Court of Appeals for the Fifth Circuit ruled that the Hunt County's Sheriff's Office couldn't delete comments on its official Facebook page that it deemed inappropriate -- since it was based on their subjective judgment.

"In most cases, it's a pretty clear-cut issue if the government official or elected officeholder is blocking individuals from their official social media page – which is clearly a public forum. It gets a little murkier when – as in the case of Pres. Trump – it's a personal social networking page. But as the Second Circuit pointed out, Pres. Trump has frequently used his @realdonaldtrump account to announce official White House news, such as when he announced his administration's ban on transgender service members," wrote Browning in an email.

In the case of Ocasio-Cortez's Twitter profile, it'll likely get pretty murky. Similar to Trump and many other public figures, Ocasio-Cortez mixes both the personal and the professional on Twitter; using her account to tweet out policy positions or crowdsource travel tips.

If the congresswoman were to comply with the demands of her trolls and simply unblock them, Browning said it's likely the lawsuits would have to be dismissed. "If Rep. Ocasio-Cortez were to unblock the individuals in question, the court would likely dismiss the lawsuits on the grounds of mootness, unless some issue remained – such as deciding how or to what extent the blocked individuals had been damaged, if at all. But in all likelihood, the cases would either be voluntarily dismissed or dismissed by the court, since there wouldn't still be any real issue in controversy for the court to decide, " said Browning.

In this article: alexandria ocasio-cortez, blocking, donald trump, dov hikind, internet, larry hogan, politics, social media ban, tomorrow
All products recommended by Engadget are selected by our editorial team, independent of our parent company. Some of our stories include affiliate links. If you buy something through one of these links, we may earn an affiliate commission.