Few would deny that Neil Armstrong's shot of fellow astronaut Buzz Aldrin is one of the most famous and compelling photos ever taken. What makes it so iconic? Of course, he had access to a place that only 11 other human beings have been, but there's more to it than that. The photo itself is well composed, full of incredible details and charged with the energy of the occasion. How Armstrong got it is a story of not just luck, but preparation and a great eye.

When the first manned missions started, NASA had more to worry about than photography. In fact, the first US astronaut to orbit the Earth, John Glenn, picked up a $40 Minolta Ansco Autoset 35mm camera himself from a Florida camera shop. The third man in space, Walter Schirra, did the same thing, but went upscale by purchasing a $500 Hasselblad 500C medium format camera, recommended to him by Life and National Geographic photographers.

NASA grasped the promotional benefits of space photos, and liked what they saw with Schirra's Hasselblad. Engineers modified the camera to reduce weight and make it easier to handle, while equipping it with a custom side-finder that could be easily used with a helmet and visor.

For the Apollo missions, the 500C was replaced with a more advanced, motorized Hasselblad 500 EL (below). NASA also added a "Réseau plate" -- responsible for the faint crosses in the photo above -- that would allow for distortion correction in post-processing. That model was subsequently used by Apollo 8 astronaut Bill Anders to take Earthrise, a photo that's at least as famous as Armstrong's shot. (To save weight, all 12 Hasselblad 500 ELs were left on the Moon's surface.) 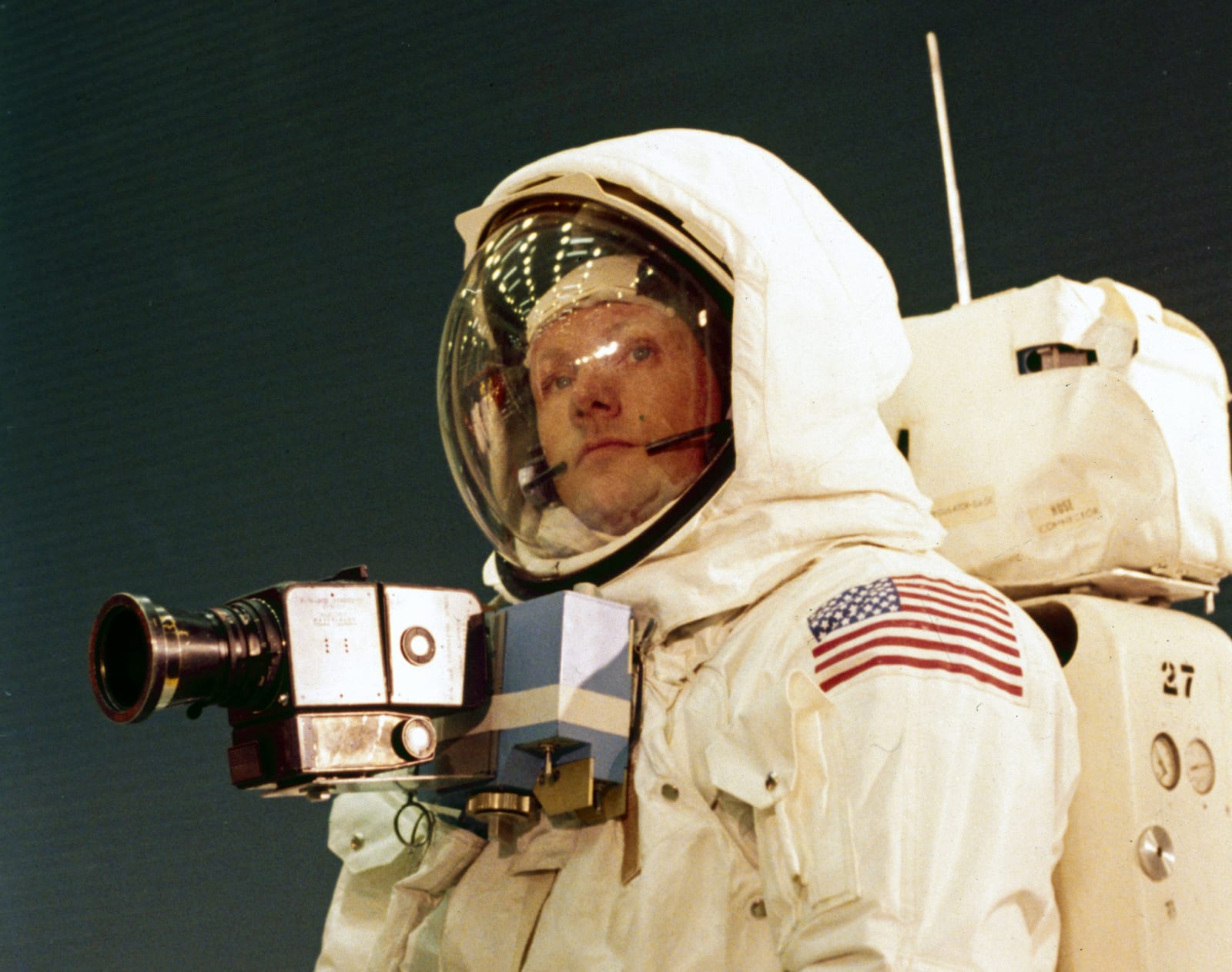 Armstrong was well-equipped and in the right place. If that was all there was to it, though, everyone with enough cash for a fancy camera would be taking great photos (spoiler: they're not). To that end, NASA embarked on surprisingly comprehensive photography training program for astronauts.

According to NASA,"over the several years prior to the Moon missions, scientific and photographic training was provided. The crews visited geologic sites in Nevada, Arizona, and Hawaii... completely outfitted with sample bags, checklists, simulated backpacks... and Hasselblad EL cameras similar to those they would use on the Moon. The astronaut would point his body in order to aim the cameras. Films taken during the practice exercises were processed and returned to the crewmen who would study the results."

Armstrong clearly mastered the lessons. The photo conveys what Aldrin called the "magnificent desolation" of the surface, while capturing the wonder and gravitas of the occasion. It paints both astronauts as anonymous explorers, coming in peace to an unconquerable black and white world. In the place of Aldrin's face, there's a reflection of the spaceship and nearly everything the astronauts brought, as well as Armstrong himself -- one of the few images in which he appears.

All products recommended by Engadget are selected by our editorial team, independent of our parent company. Some of our stories include affiliate links. If you buy something through one of these links, we may earn an affiliate commission. All prices are correct at the time of publishing.
Neil Armstrong's Buzz Aldrin photo is unparalleled in art
50th-anniversary
apollo1150th
BuzzAldrin
gear
Hasselblad
July20-1969
Moon
NASA
NeilArmstrong
Photo
space
thebigpicture
thenewbigpicture