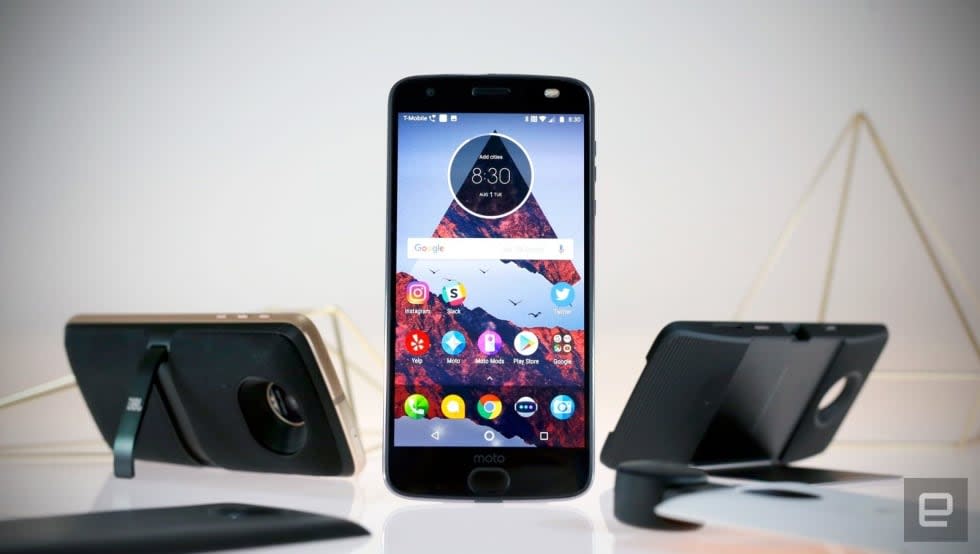 Back when Motorola announced the Moto Z in 2016, one way the company tried to sell consumers on Moto Mods was to promise that they would extend the life of the phone. In a way, Motorola is delivering on that promise with a new update to its 5G Moto Mod. Starting this week, Moto Z2 Force owners with Verizon (Engadget's parent company) can use the accessory to add 5G connectivity to the two-year-old phone. With the update, the accessory is now compatible with three different devices: the aforementioned Moto Z2 Force, as well as 2018's Moto Z3 and the relatively new Z4.

Motorola is also updating the 5G Moto Mod to enhance its ability to function as a backup battery. Moving forward, if the accessory detects that the battery on a phone it's connected to drops below a certain threshold, it will start sharing power with that device. It also works in the other direction: the Moto Z2 Force, Moto Z3 and Z4 will share their power reserves with the 5G Moto Mod if its battery drops below a certain level. Thankfully, you won't have to worry about accidentally draining your phone's battery to zero, as Motorola says both the phones and mod will only pull power from one another if they have enough to spare. Additionally, Motorola promises faster download speeds on Verizon's 5G network. The new software comes pre-installed on Moto Z4 units sold by Verizon. Meanwhile, on the Moto Z2 Force and Moto Z3, the enhancements are a download away.

After a recent expansion, Verizon's 5G network available in nine cities nationwide: Atlanta, Chicago, Detroit, Denver, Indianapolis, Providence, St. Paul, Minnaepolis and Washington, DC. The carrier's current goal is to expand its 5G network to more than 30 US cities before the end of the year.

While there are likely very few Moto Z2 Force owners still out there, and fewer still who live in any of the nine cities where Verizon's 5G network is available, the fact Motorola is updating a two-year-old phone to extend its life has no downside. More smartphone companies should be doing the same.

In this article: 5g, gadgetry, gadgets, gear, mobile, Moto Z2 Force, Moto Z3, Moto Z4, Motorola, thebuyersguide, verizon
All products recommended by Engadget are selected by our editorial team, independent of our parent company. Some of our stories include affiliate links. If you buy something through one of these links, we may earn an affiliate commission.