Playdate's tiny hand-held with a crank is big on charm

I dare you not to smile while playing games on Playdate.

Three months ago, Panic Inc. revealed that it's been working on a curious product: a hand-held game system called the Playdate, priced at $149. You may recognize Panic as the company behind popular Mac software like Transmit and Coda, or perhaps as the publisher of indie games such as Firewatch and Untitled Goose Game. At first, the Playdate might seem unremarkable; it's a tiny console with a black-and-white screen, a pair of buttons and a D-pad. But, it also has ... a crank. No, the crank isn't meant to power it up; it's actually meant as a game controller. Yes, really.

It's a hilariously silly yet strangely compelling proposition. So much so that within 24 hours of its announcement May 22nd, more than 70,000 people signed up to be on the waitlist for Playdate (today, there are over 110,000). In the weeks and months since then, more than 8,000 developers have also registered their interest in making content for the device.

Designed in collaboration with Teenage Engineering, a firm known mostly for its portable synthesizers, the Playdate had morphed from a Game & Watch homage into a gaming console that lived between worlds. "We didn't want it to be too cool, but we didn't want it to be too goofy," said Cabel Sasser, Panic's co-founder. The same goes for the device's intriguing retro-yet-modern appeal. The Playdate's black-and-white screen might scream old-school, but the device itself is outfitted with a modern ARM-compatible processor from STMicroelectronics, WiFi, Bluetooth, 2GB of flash storage, 16MB of RAM and a rechargeable battery. The Playdate is definitely not just some Gameboy clone.

"There's a real sweet spot in the middle of all of it that's really challenging to calibrate," Sasser said. This is especially the case for a relatively small company that has zero experience making its own hardware. Sasser and his cohorts had to learn, through extensive trial and error, to figure all of it out for the better part of seven years, all while running a software company. 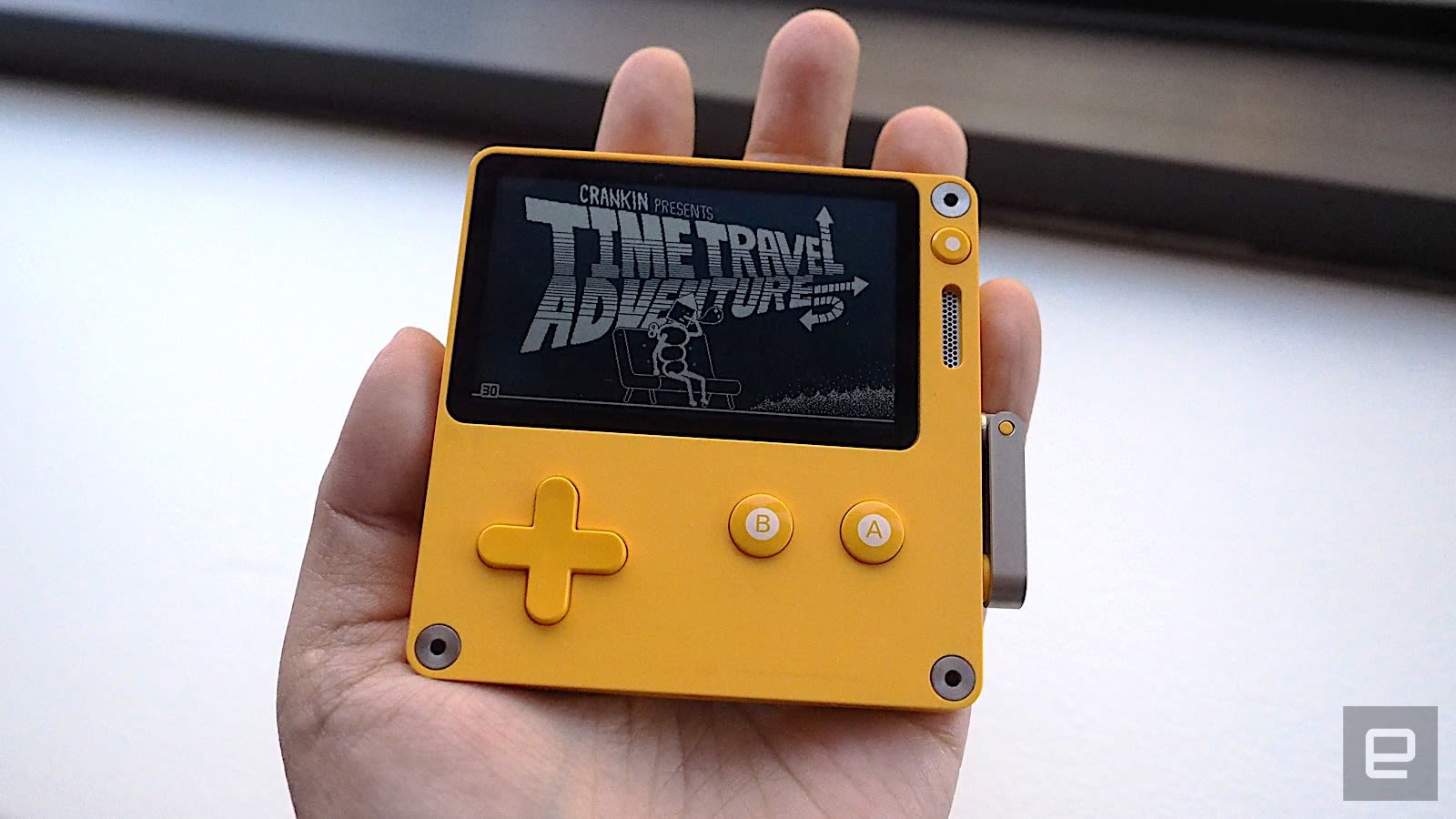 Now, the company is ready to share it with the world. This weekend, at PAX West, the company will show off the Playdate to the public. There will be many samples for people to play with. It will be, in essence, the product's first real-world stress test. The team at Panic is, understandably, nervous.

"Yes, I'm a little scared," joked Greg Maletic, Panic's director of special projects who's also the lead for Playdate. "Like, gosh, is this going to last 32 hours of cranking? We're definitely looking to make sure it does."

But Maletic had no qualms about letting me play around with a late prototype of the hardware when I visited Panic's offices earlier this month. It's smaller than I expected. At roughly 3-inches-square, the Playdate has the feel of a novelty calculator that was barely larger than a stack of Post-It notes. It's certainly smaller (and lighter! It's only 86 grams) than any gaming hand-held I've handled. To be honest, I wasn't sure if that was a good thing.

Yet despite the initial skepticism, a smile spread across my face the more I played around with it. It's a charming little device, with its tiny 2.7-inch black-and-white display and its marigold-yellow finish. Next to that aforementioned display is a tiny menu button and a speaker, while the USB-C port and a headphone jack are underneath. Sure, the Playdate is small, but after a while, I didn't mind its size at all. The D-pad felt clicky enough, as did the A and B buttons on the right. It handled perfectly fine in my hands. 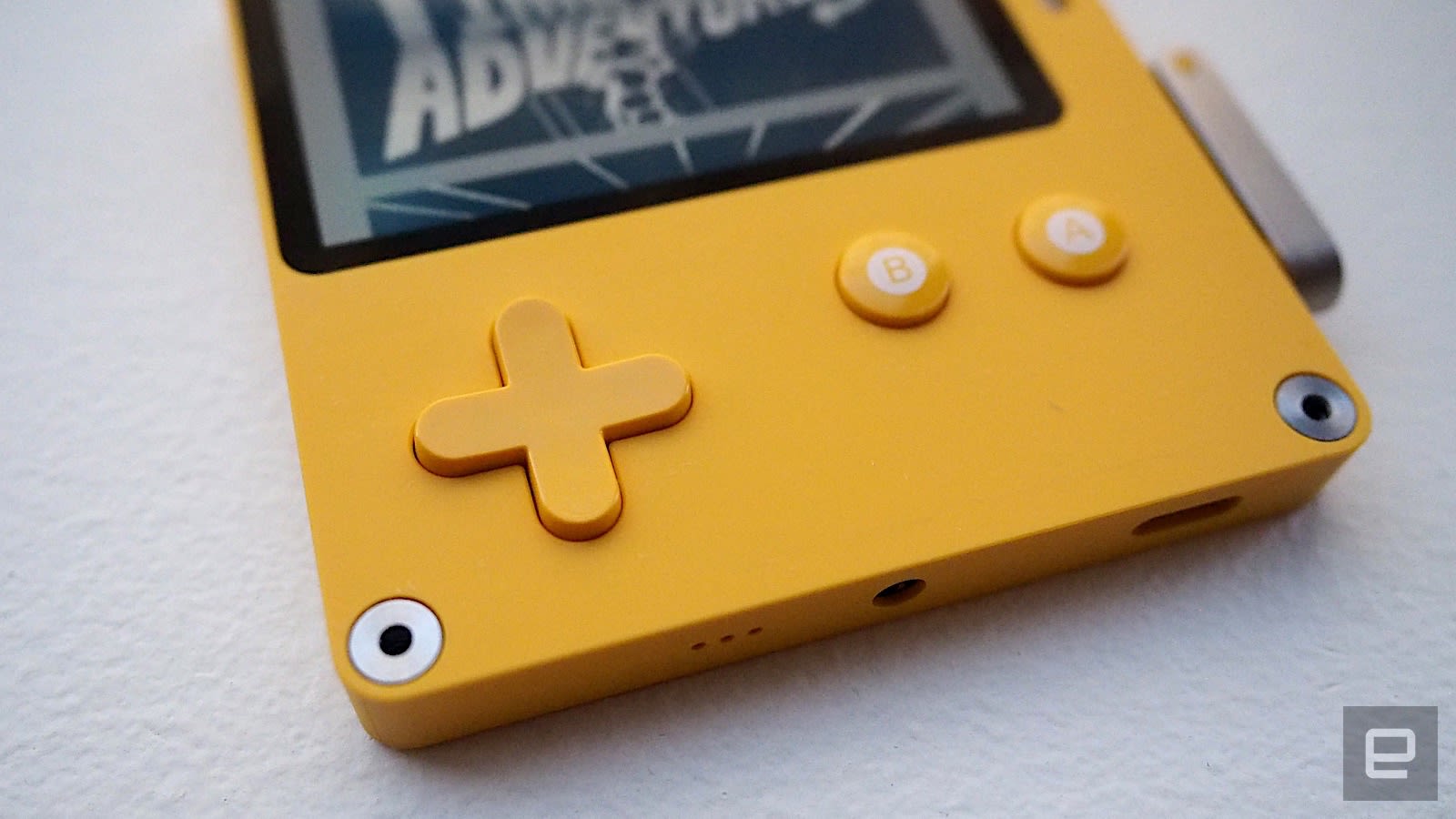 Of course, I was especially keen to try out the crank. It comes in a closed position, with the metal part of the crank resting on the Playdate's right side. To access it, I flipped it open and pulled the bottom part of the crank up 180 degrees to reveal a small rotating yellow handle. Then I was free to rotate the crank backward or forward as much as I wanted, similar to how you would work the reel of a fishing rod. It was pretty fun to rotate through the Playdate's menu simply by spinning the crank.

As for how it feels -- well, that depended on the prototype. In one model, it ground a little as I spun it around. In another, it felt a lot smoother. While I was playing with one model, Maletic noticed that the crank continued to spin after I let go of it, which he said should not happen. Obviously, the movement and motion of the crank still need some fine-tuning.

What surprised me the most about the Playdate was its black-and-white display. It's not at all like the e-ink screen you'd find on your Kindle. It's a Sharp Memory LCD, which is surprisingly crisp and clear, with a high pixel density that looks great even under bright sunlight. It's a display that's not used a lot in consumer electronics, with the exception of early Pebble watches. In a bit of trivia, Sasser told me he heard from someone at Sharp that it's also common in coffee makers in Japanese 7-Elevens. 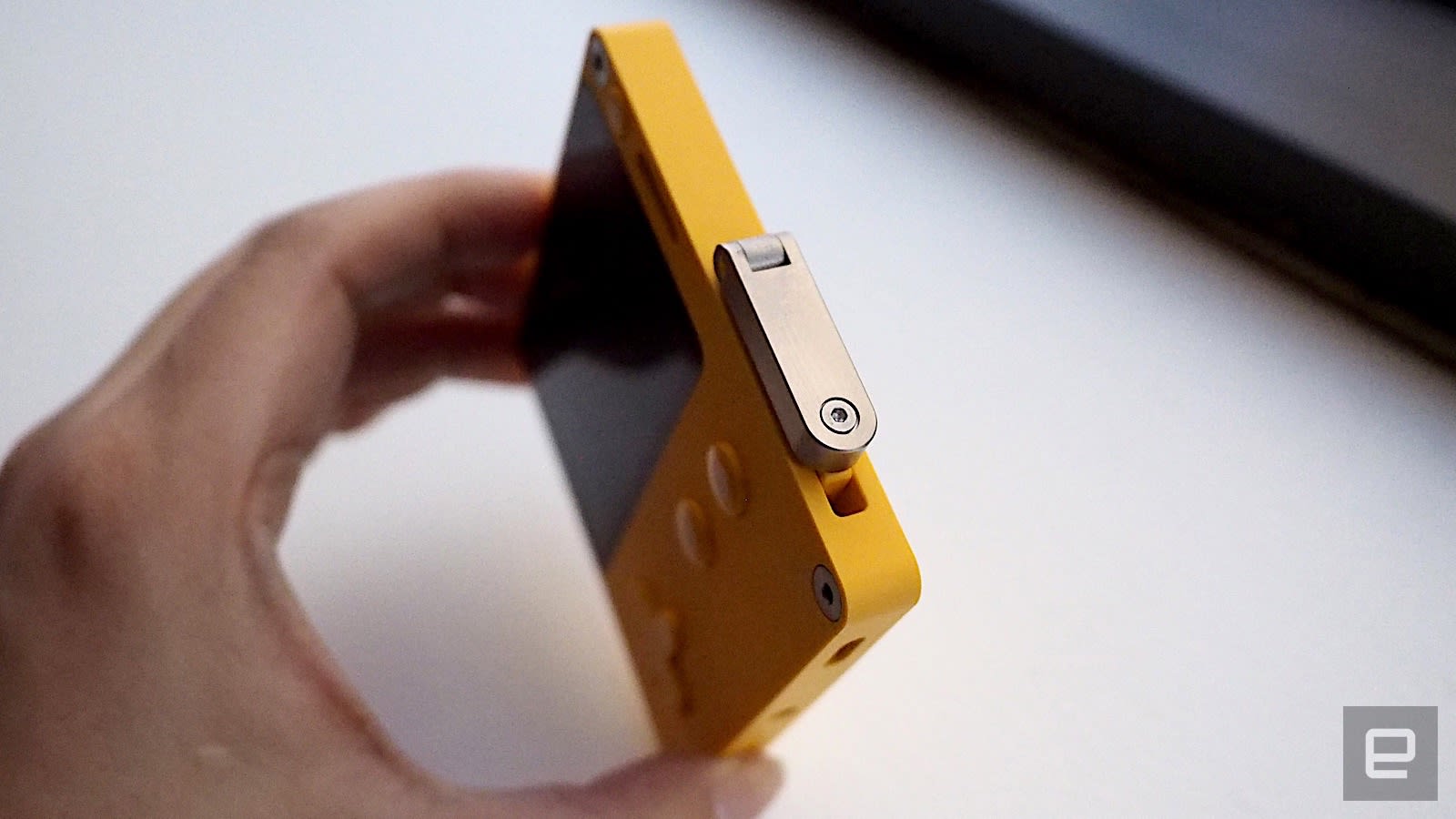 Perhaps one reason it's rarely used is that it's surprisingly expensive, partly because it's not mass-produced. "It's ludicrous, actually," Sasser said. "We could've used an OLED screen, full-color, and it would've been cheaper than this. I think that's a hard thing for people to grasp."

"But there's also some really unique properties of the screen that we hope to take advantage of," he continued. "One is that it can hold an image with very low power. ... We have dreams of when your Playdate is sleeping on your desk, it shows a clock or other cool things."

"If we're going to try to sell this thing in a universe where, you know, we all have the latest gadgets with the high-res screens, it made sense for us to do something a little bit different," Sasser said. "If it just felt like a different version of your phone, it wouldn't be that interesting."

The real test, of course, was actually playing a game on it. I played Crankin's Time Travel Adventure, which was designed by Keita Takahashi, the man behind Katamari Damacy. As you might expect from Takahashi's history, the game is, well, a little wacky. 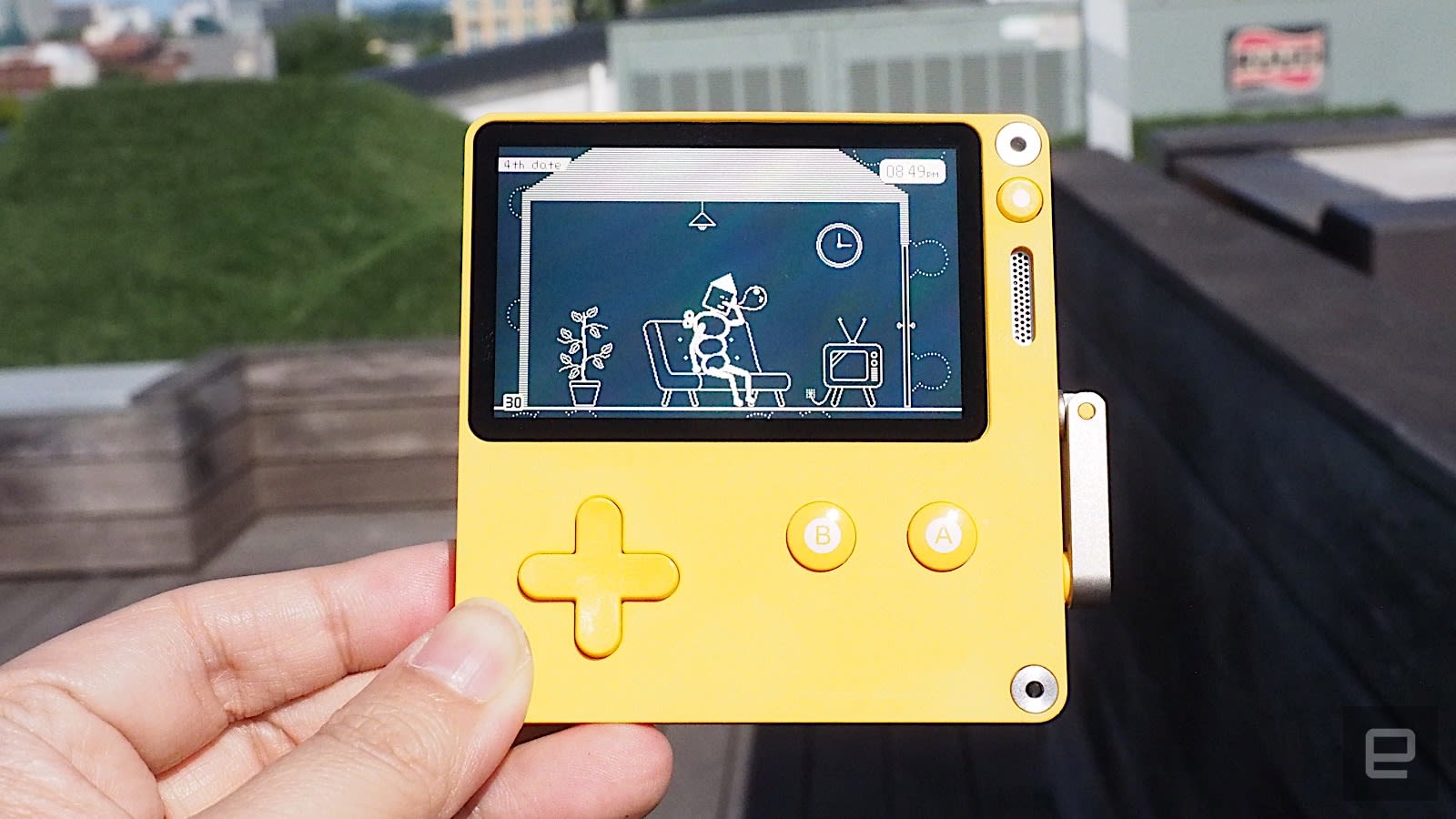 The premise is that you're a character named Crankin and you're late to your first date with Crankette. You then have to run to meet her, but you inevitably end up late, and she's not too pleased. The game then pushes you to the next day and you start over, but now there are obstacles and enemies, such as flying butterflies, blocking your path, and you need to avoid them or you'll fail. The obstacles become more difficult with each level.

The only controller in this game is the Playdate's crank, which is used to control the flow of time. Spin it forward, and time moves forward; spin it backward, and Crankin goes backward too. The trick, however, is that those aforementioned obstacles exist outside the flow of time, and you need to position Crankin in the right spot to avoid those enemies. If Crankin bends down to smell flowers, for example, you need to make sure he does so exactly when bees fly overhead.

At first, it seems like a relatively easy game, but the difficulty ramps up considerably, with precision timing becoming increasingly important as time goes on. Let's just say that I didn't make it past level five. The only real complaint I had is that I thought the text on the screen was far too small to read, which Maletic said is an issue they're working on. 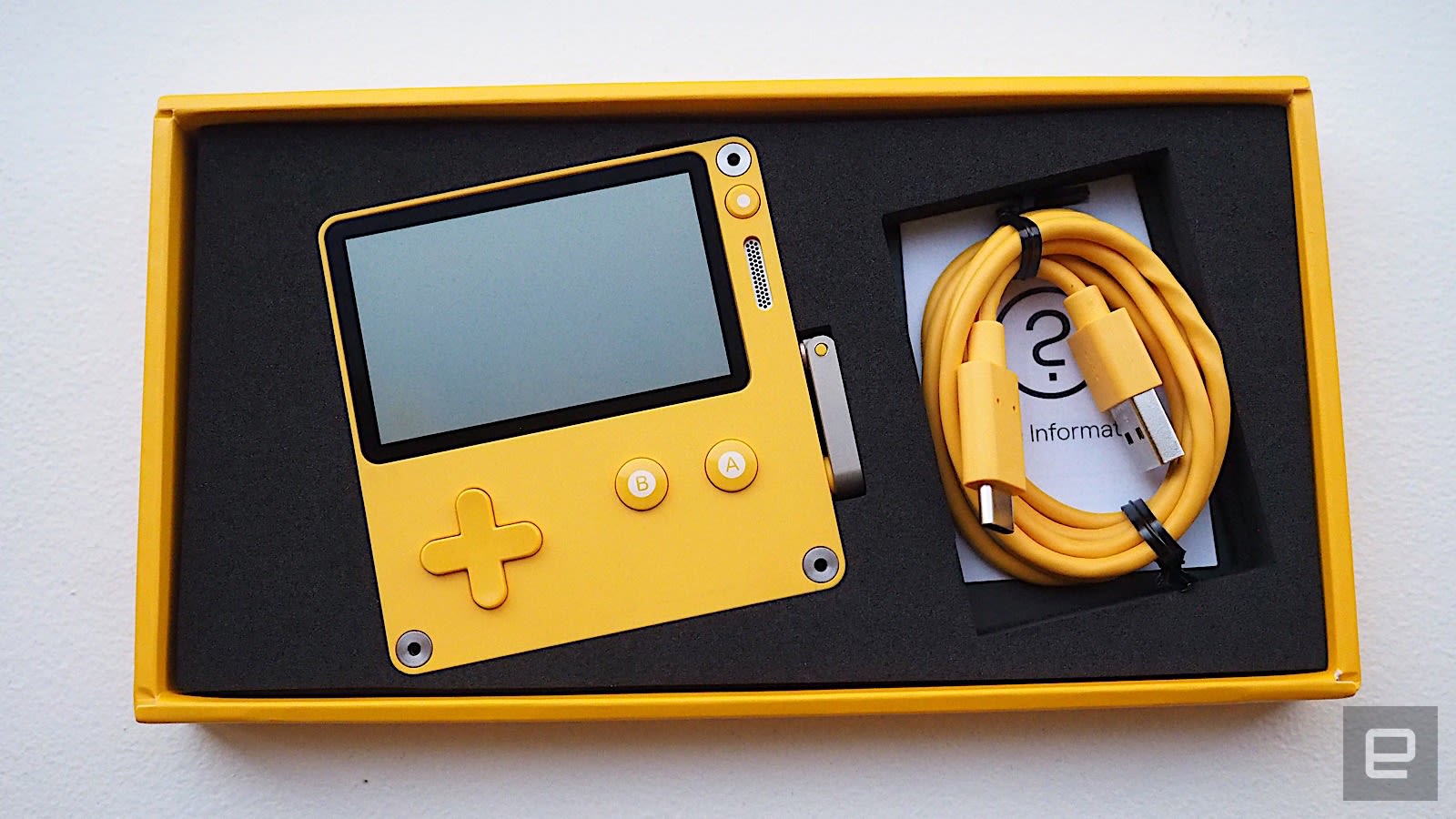 Speaking of games, that's another area that sets the Playdate apart: Included with the cost of the device ($149) is a season's worth of games; one delivered every Monday for 12 weeks. Aside from Takahashi, Panic has signed up other indie designers such as Zach Gage and Shaun Inman to participate in its inaugural season. You'll eventually be able to sideload other games, but Panic liked the idea of you getting a new game every week as a surprise.

"For a long time, we were thinking it would be cool to play a season's worth of black-and-white games, and then maybe at the end, you can like unscrew the back and there's like a tiny color screen," laughed Sasser, admitting in the end that it was a crazy idea. The season-of-games concept, however, was a lot more achievable.

Unfortunately, Panic isn't ready to talk about battery life, as the Playdate isn't close enough to production. For now, the company is just hoping to show people how it looks and works, and events like PAX West are one way to do that. Preorders are slated for later this year, with the product expected to ship in early 2020. If you're interested in ordering one, you can go to Playdate's website to get on a mailing list so you'll be one of the first to know when it's for sale.