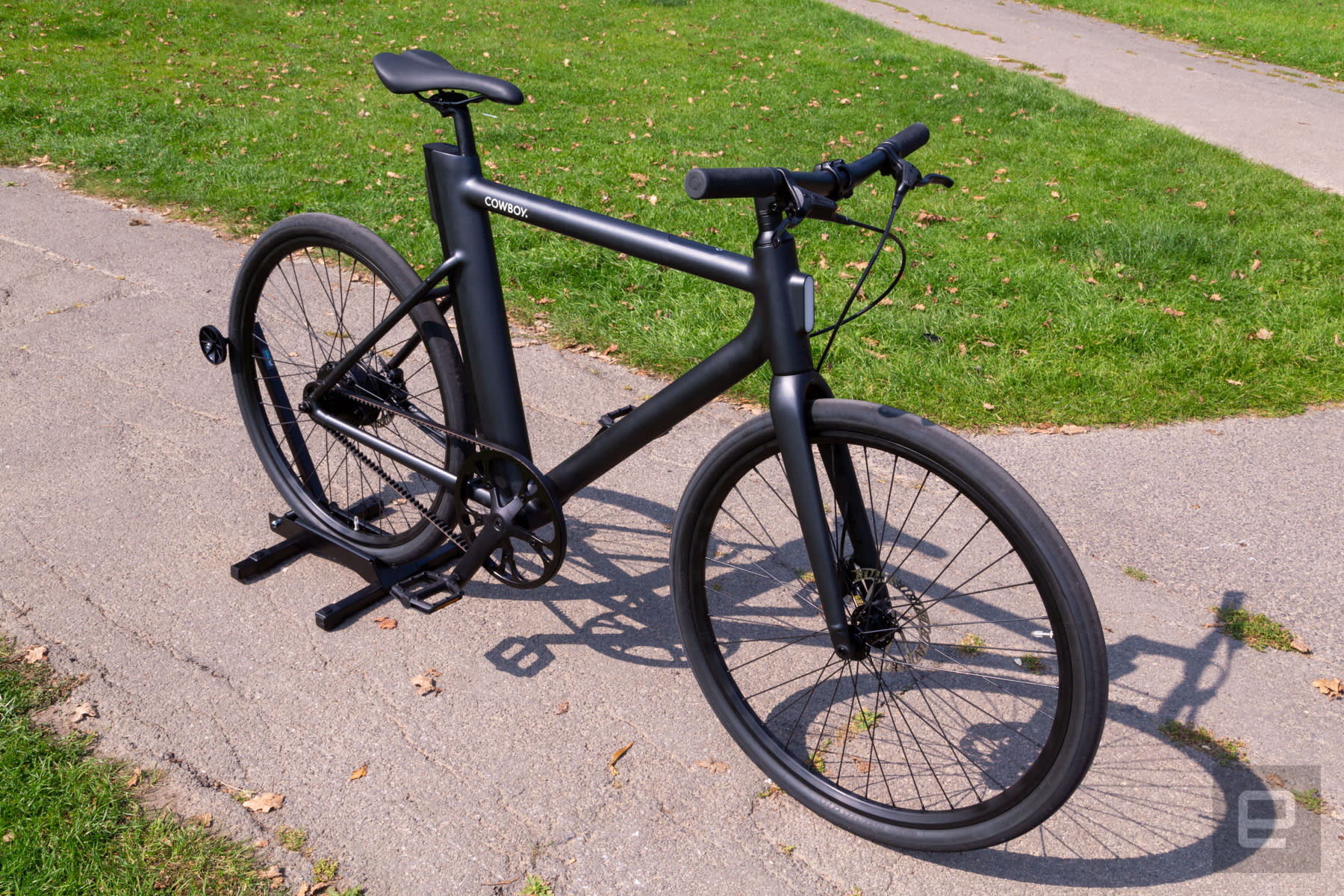 A near-perfect fusion of style and convenience.

Electric bicycles usually come in two flavors: either a gorgeous two-wheeler with a non-removable battery inside the frame, out of sight, or a design-be-damned mode of transportation that has the battery stuck to its frame like a hideous torpedo. Form or function? That's the decision most prospective e-bike buyers have to make. With the Cowboy, though, there's no compromise. The Brussels-based startup has managed to crack this age-old problem with a sleek but detachable battery that slides behind the seat post. It's a neat solution that immediately elevates the bike above most of its rivals.

At any distance, this city-centric bicycle looks fantastic. I love the dark gray finish and the shape of the frame, which consists almost entirely of straight, angular lines. It's an undeniable head turner that should appeal to fixie-riding hipsters and office folk alike. The battery is always visible and, curiously, has a slightly darker finish than the frame. Its positioning, though, means it's less noticeable than the removable battery on most e-bikes. If I hadn't told my friends and family beforehand, I'm not sure they would have noticed that the Cowboy was electrified (not until they stepped on and started riding the thing, anyway).

The oval-shaped lights, which are neatly integrated into the frame and battery, give the bike some futuristic flair. It all comes together in a package that feels both vintage and straight from a science fiction movie like Blade Runner. I can honestly imagine Rick Deckard as a still-in-training police officer, riding one of these around the rain-soaked streets of Los Angeles, wondering when he'll finally receive his iconic Spinner.

I was floored by the bike's rapid acceleration.

Style means nothing, though, without performance. Cowboy's first e-bike has a 250W rear-hub motor and, by default, a top speed of 25KMH (15.5MPH). That's pretty standard across the industry, because for now that's the maximum allowed in Europe. Still, companies have different ideas about when, and how much, the motor should step in and help you reach that ceiling. Cowboy's take is surprisingly aggressive, especially at lower speeds. I was floored by the bike's rapid acceleration whenever I entered a roundabout or pulled away from a previously red light. And if you're still not happy, there's an off-road mode that increases the top speed to 30KMH.

Otherwise, there's little to think about while riding the bike. The assistance is entirely automated, so you don't have to worry about gears or power levels. The Cowboy uses two integrated torque and speed sensors that, combined with an "optimized algorithm," know how hard you're pedaling and what, if anything, you need from the motor. Relinquishing control can be tough if you're used to a traditional bicycle with plenty of front and back gear combinations. I sometimes wanted a higher gear, for instance, so I could continue pedaling down steep hills. 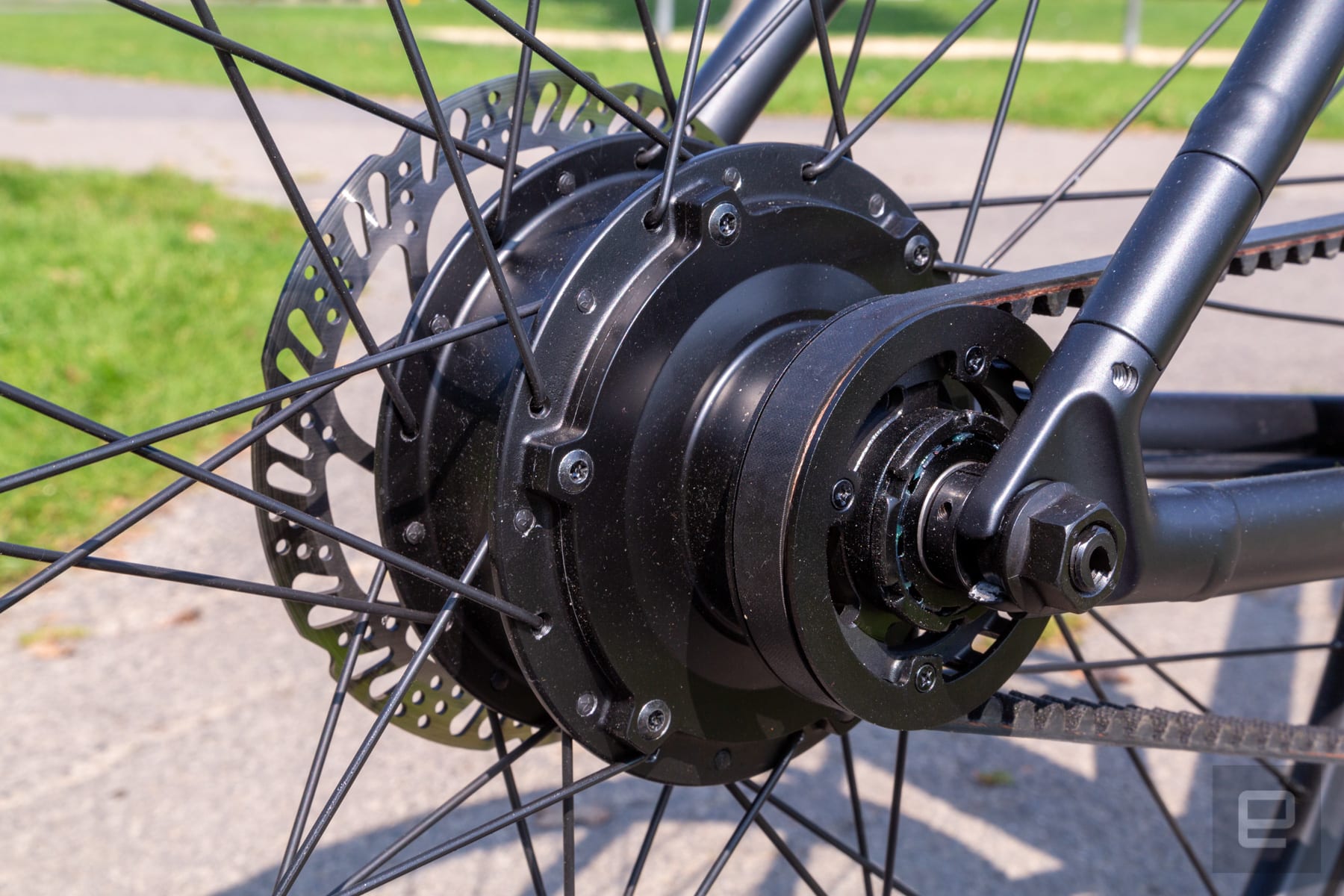 It's a small quibble though. The bike is agile and smooth, with no noticeable judder when the motor kicks in. There's no front or rear suspension though -- this is a commuter bike, after all. If you ride off the sidewalk or over a massive pothole, your buttocks are going to know about it. I had no issues with the saddle, though, or the rubber-and-glass-fiber belt, which is cleaner than an oily chain and likely more durable.

The Cowboy weighs 16KG (35 pounds), which is lighter than other e-bikes I've tested, including the VanMoof Electrified S2 and the fast-folding Gocycle GX. The weight is comparable to other commuter-style bikes but noticeably heavier than fixies and carbon-fiber racing types. I wouldn't want to drag it up a flight of stairs every day.

The battery often detaches with a bit of a thud.

It's a good thing that the battery is removable, then. The oblong power pack requires a key to unlock and separate from the bike. The lock itself can be a little stiff, and the battery often detaches with a bit of a thud. I'm not surprised that the company has added a rubberized material to the part of the frame where the battery normally lands; without it, I suspect the bicycle would quickly scratch. Regardless, it's a straightforward process, and the included charger, while large, can be plugged into any socket at home.

The battery takes roughly 3.5 hours to replenish and offers up to 70KM (43 miles) on a single charge. That range will vary, of course, depending on the effort you exert and the number of hills you tackle. If you live in a relatively flat city, though, you can theoretically ride four miles both to and from work, Monday through Friday, without recharging. 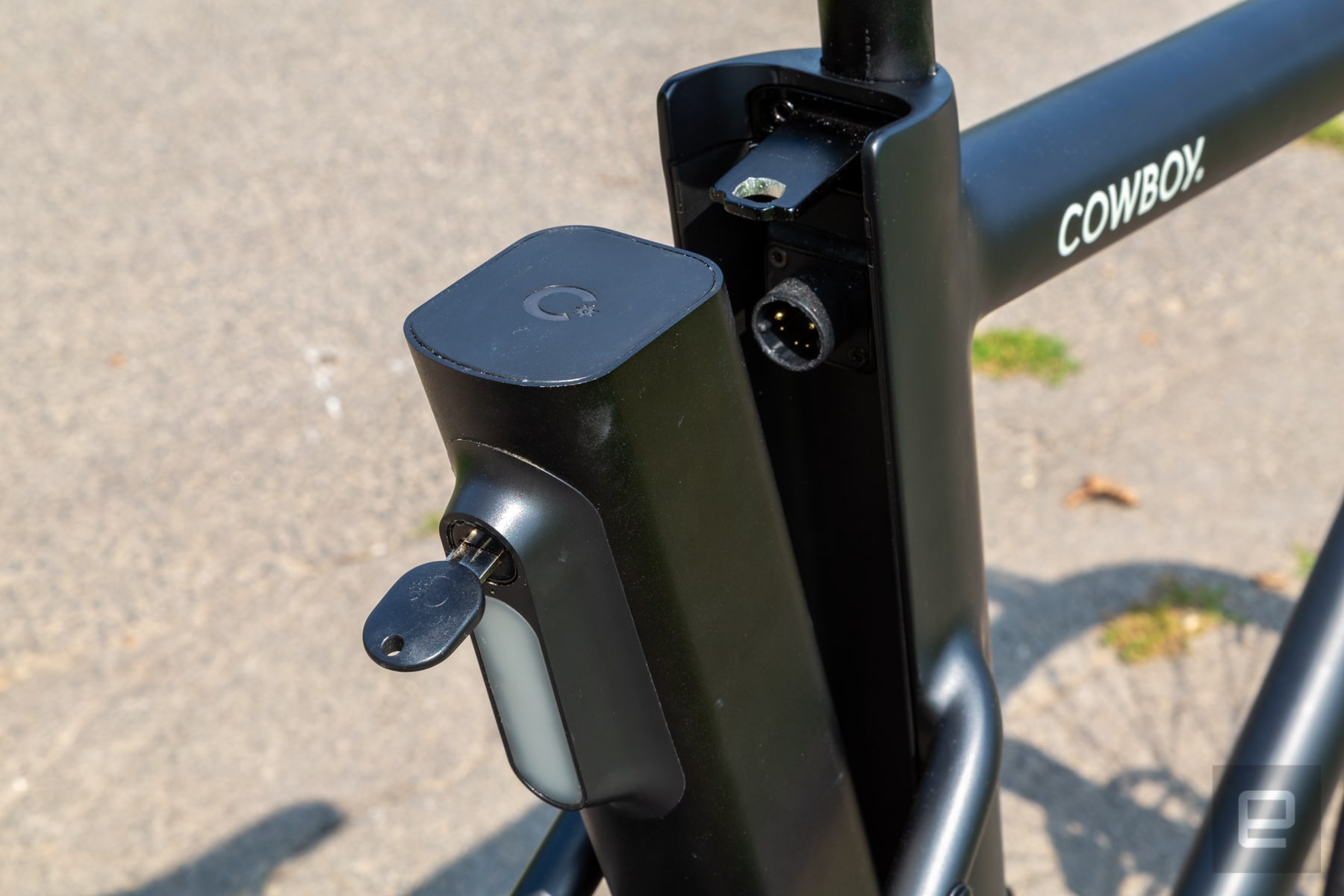 If you want to ride a Cowboy, you'll need the company's mobile app. That key I mentioned before? Its only purpose is detaching the battery -- you can't use it to turn on the bike. And unlike VanMoof's electrified rivals, there's no way to unlock the Cowboy with an old-fashioned passcode.

To start riding, you have to dig out your phone, open the Cowboy app, make sure Bluetooth is enabled and then long-press the pink padlock icon. Compared to a regular bike -- which you can jump on and ride in a jiffy -- it feels strangely slow and cumbersome. At the bare minimum, I would like the option to unlock the Cowboy via Bluetooth proximity. And what happens if your phone runs out of charge? Get ready to push your bike home, I guess.

The bike has a built-in SIM card and GPS tracking.

Don't be fooled by the app's padlock icon either. If you choose to "lock" the Cowboy, you're merely switching off the motor. That means unless you're carrying a traditional bike chain or D-lock (and let's be honest, you absolutely should), any thief can still swing their leg over the frame and ride off. It's tough to pedal without the assistive motor -- I should know, because I've forgotten to unlock the bike a few times -- but anyone in half-decent shape could power through.

To combat potential thieves, the bike has a built-in SIM card and GPS tracking. Unfortunately, the latter isn't active all the time: If you lock your Cowboy and walk off, it will simply show its last-seen position in the app. If you suspect your bicycle has been stolen, though, you can tap Find My Bike and see its current location. The feature is only meant for emergencies though. Tapping the appropriate icon in the app brings up two warning screens with confirmatory text such as "Are you sure your bike has been stolen?" 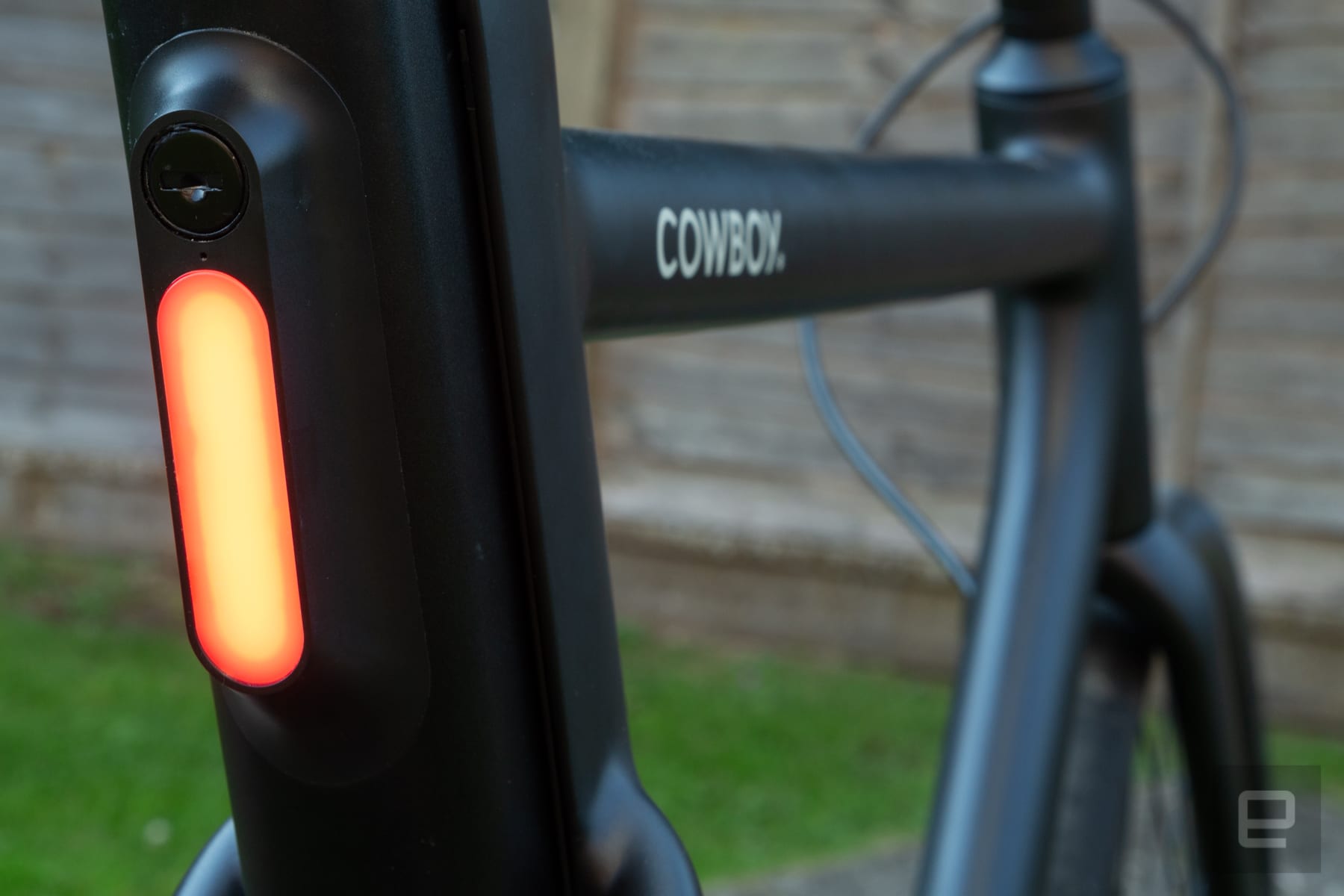 It's an understandable limitation that's meant, presumably, to conserve battery life. Still, I can't help but feel disappointed. There's a brick-and-mortar bike shed, for instance, roughly 10 meters from my apartment block. I would love to store the Cowboy there and then periodically check in to make sure it's OK. The company does, however, offer live theft notifications through its Easy Rider subscription service. The Standard tier, which costs €8 (roughly $9) per month, comes with theft insurance and "fast lane" customer support too. The Plus version, meanwhile, is €10 (roughly $11) per month and adds damage insurance to the Standard perks.

Cowboy's must-have companion app is, at least, clean and thoughtfully designed. By default, the home screen has a map that shows your position and the last-known whereabouts of your e-bike. Once you've gone through the unlock process, the app will reveal a collapsible tab with some basic ride information. In its smaller form, this includes the remaining charge, an estimated distance for that charge, your current speed, the power output of the motor and three shortcuts for locking the bike and activating the motor and the integrated lights. Swipe up and the tab will reveal a little more information, such as the distance covered and time elapsed during your current ride. The charge and power levels, too, are represented by curved lines similar to a speedometer's.

The Cowboy is one of the best e-bikes I've ever tested.

The app is packed with other useful features, such as an auto-off timer, two different ride modes, live chat with Cowboy's customer support and a history of your previously completed rides. The app is also designed to be used while riding. The bike doesn't come with a smartphone holder, however, so you'll need to buy a third-party accessory such as a Quad Lock if you're interested in this.

The Cowboy is one of the best e-bikes I've ever tested. To ride one of these machines full-time, though, I would need to live in a country where the bike is sold. For now, that's limited to Belgium, France, Germany, Luxembourg and the Netherlands. I would also have to save up €1,990 (roughly $2,198), which is undeniably expensive. That price tag is in line with other city-centric e-bikes though. VanMoof's Electrified S2 and X2, for example, both have an early bird price of €2,798 (roughly $3,090) at the moment, while the electric Brompton and fast-folding Gocycle GX will set you back £2,595 (roughly $3,159) and £2,899 (roughly $3,529), respectively. 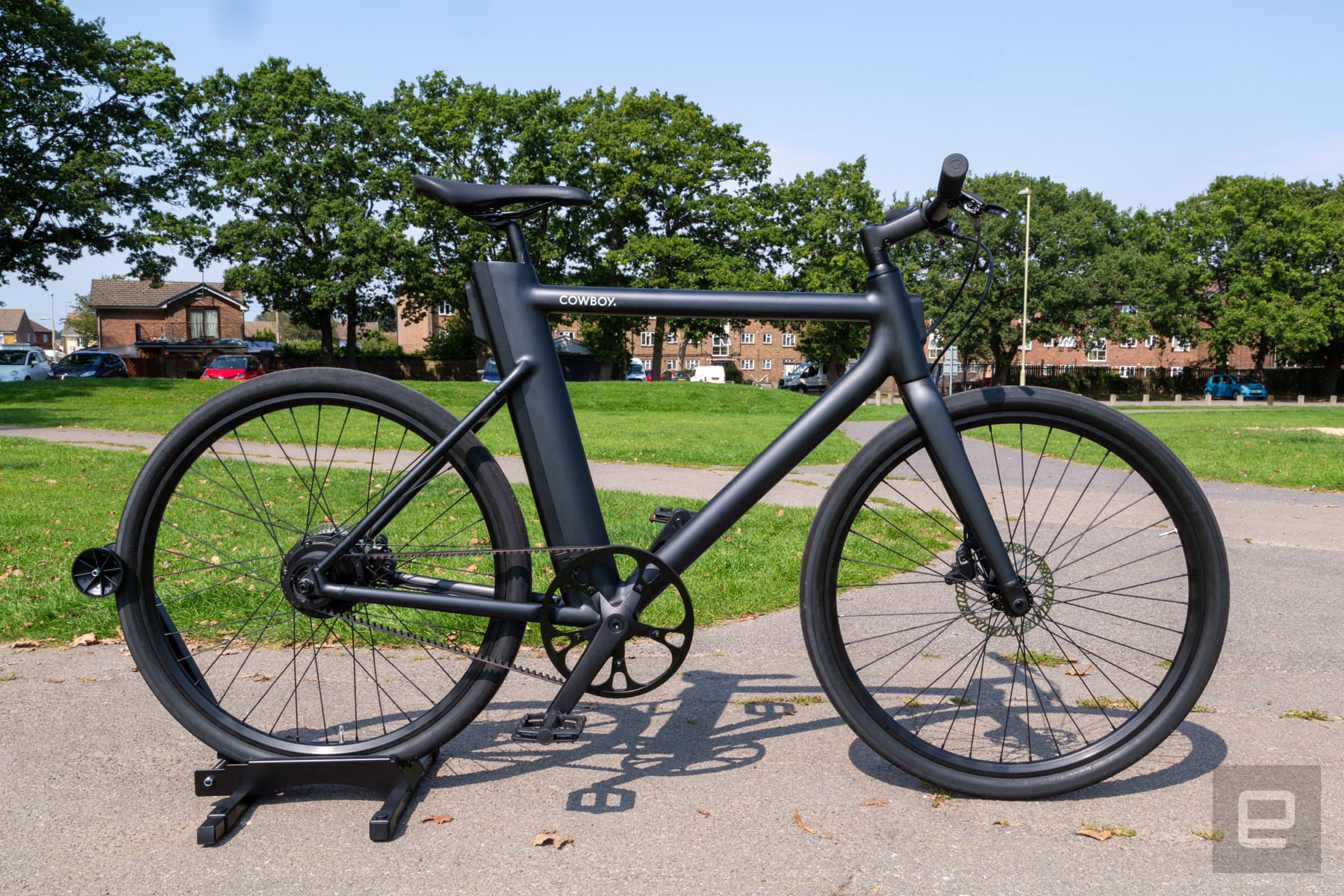 The Cowboy can't fold, but its removable battery and excellent acceleration make it an appealing option. The question, as always, is whether you'll ride any e-bike enough to justify its high price tag. If you can replace most of your car journeys with a motorized two-wheeler, the answer might be yes. Otherwise, you might want to consider some cheaper but shorter range forms of electric transportation. You can buy a whole host of battery-equipped scooters, for example, including the luxurious Boosted Rev, and skateboards, such as the vlogger-standard Boosted Plus, for less than $2,000. Just how badly do you want to pedal?

All products recommended by Engadget are selected by our editorial team, independent of our parent company. Some of our stories include affiliate links. If you buy something through one of these links, we may earn an affiliate commission. All prices are correct at the time of publishing.
View All Comments
Cowboy's first e-bike solves the removable battery problem