ASUS’ StudioBook Pro X is a powerful laptop for creatives

And it packs in the company’s ScreenPad touchscreen touchpad.
B. Steele|09.04.19

ASUS is massively expanding its ProArt line here at IFA 2019, adding laptops, a desktop and a display to the series this week. Not all of it was on display ahead of the show, but the one laptop that caught our eye was the Studio Book Pro X. It's a massive machine, and the first NVIDIA Quadro-powered device to house the ASUS ScreenPad tech. If you're unfamiliar, that's the fancy touchscreen display that sits where the trackpad usually is. Now ASUS is on ScreenPad 2.0, a feature we first saw at Computex.

First, this thing is a beast. Sure, any 17-inch laptop is going to be pretty big, and ASUS says it managed to make the StudioBook Pro X the same size as some 15-inch machines. Even still, this thing is going to take up a lot of room in your backpack and add some heft to your gear collection. The company managed a 92 percent screen-to-body ratio for the 16:10 panel. This means there's extra room to work with since ASUS nixed the larger bottom bezel found on other StudioBook laptops. The display also has a Delta-E 1 rating for color accuracy (the closer to 0, the better) and covers 97 percent of the DCI-P3 gamut. And if you find yourself needing a little more space for toolbars and palettes, you can dock them on the ScreenPad below the keyboard.

The ScreenPad may seem like a gimmick, but as someone who frequently runs out of room on a 15-inch display for Photoshop tools, I promise you it's not. And that's especially true for people who need to run robust software for things like video editing, 3D rendering and game design. You can use the touchpad touchscreen as a mini display of sorts, placing full windows down below or just moving one aspect of a program's UI for easy access. Heck, you can even put your Spotify playlist down there if you want. When the time comes to turn it back into a touchpad for swiping, you can easily do so in a single tap. 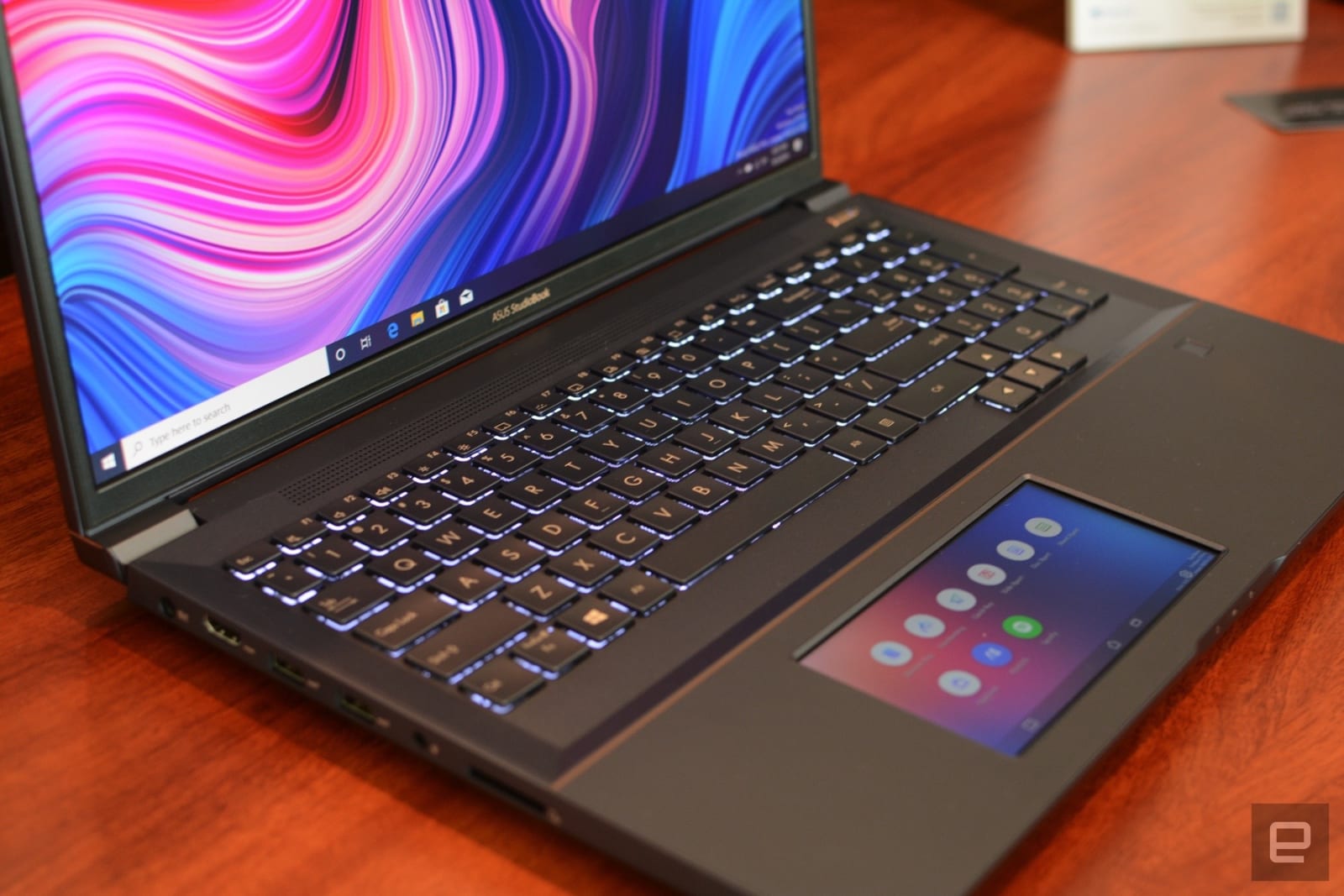 Inside, the StudioBook Pro X packs NVIDIA Quadro RTX 5000 graphics alongside either an Intel Xeon or 9th-gen Core i7 processor. During our brief time with the device, we weren't able to put those internals to the test, but this should be enough to handle demanding software. In terms of connectivity, there are 3 USB-A ports, 2 Thunderbolt 3 ports, an HDMI port and an SD card slot.

While a lot of powerful laptops are designed for gaming, they typically also sport design touches for that audience. They look cool at home, but you may not want to take your multicolor backlit keyboard to the office for a presentation. ASUS remedied all that as well, opting for a nice blueish gray color for the StudioBook Pro X with rose gold accents. It still resembles a gaming laptop in overall size and some of the details, but at least it doesn't obviously look like one. The company also says this beast has passed military-grade durability tests against factors like vibration, altitude, humidity and extreme temperatures. Hopefully that means it'll survive a trek around the globe should you need to take one.

These StudioBook models like the Pro X are direct competition with Acer's ConceptD line for professional creatives. Acer also updated that series hear at IFA, announcing the high-end laptops would get Quadro RTX graphics.