How will it sell without support from Google?

Huawei's party may have been spoiled by leaks, but the company was still smiling as it invited the world's press to meet its Galaxy Note killer, the Mate 30. The Mate 30 is Huawei's 6-plus-inch series of devices for enthusiasts and mobile professionals on the go, now refashioned as a camera first, smartphone second. And this is a new kind of smartphone, too, one that breaks away from Google's services to forge its own path.

The Mate 30 Pro has the most eye-catching specs, with a 6.53-inch, "always on" 2,400 x 1,176 flexible OLED screen that curves around both edges of the device. The volume buttons are now on-screen, and available with a double tap at the edge of the display.

The regular Mate 30, meanwhile, has a 6.62-inch 2,340 x 1,080 rigid OLED that does not stretch beyond the edges. In person, the regular Mate 30 looks a little pedestrian compared to its flashier partner, the curved edge display is the standout feature. Although, much like Samsung's Edge series devices, that all-over screen is a nightmare for accidental button presses.

In terms of battery life, the Pro ships with a 4,500mAh battery which the company claims will last for 9.2 hours of "heavy" use, while the regular model will last for 8.2 hours on its 4,200mAh cell. In the past, Huawei devices have lasted a long time -- these new devices will likely do the same. In terms of charging, you can pump 40W of electricity over a cable, or 27W via its SuperCharge wireless plates.

The Mate 30 harnesses the company's new Kirin 990 5G system-on-chip, made with a 7-nanometer process that promises significant performance increases over the previous generation. The company says that 5G performance will be far faster than on rival handsets (cough, the Galaxy Note, cough) and available in more countries.

Huawei is relying upon its partnership with Leica to burnish its imaging credentials, with four image sensors poking out of the back of the phone's "Halo Ring" back. On the Pro, that includes a 40-megapixel "Cine Camera," a 40-megapixel "SuperSensing" camera, and 8-megapixel Telephoto and a 3D, depth-sensing lens. Putting the lenses in a ring actually makes the phone look a little like Panasonic's Lumix CM1 phone-camera from days of yore.

The banner feature among all those cameras may be a new ultra-slow motion mode on the Mate 30 Pro, which was demonstrated by filming a hummingbird where you can see every movement of the beating of its wings. It's faster (well, slower?) than the competition, with another deliberate reference to the Galaxy Note 10. The company is clearly suggesting that the Mate 30 Pro is more of a camera than it is a smartphone, with low-light images and video recording that could be the equal of professional equipment. Although we should always take Huawei's claims with a pinch of salt after it was found faking sample images from its phones with a DSLR just a few years ago.

On the vanilla Mate 30, the cameras are a little more modest, with a 16-megapixel, f/2.2 sensor adjoining a 40-megapixel f/1.8 wide-angle lens. The set is rounded out by an 8-megapixel f/2.4 telephoto with OIS. 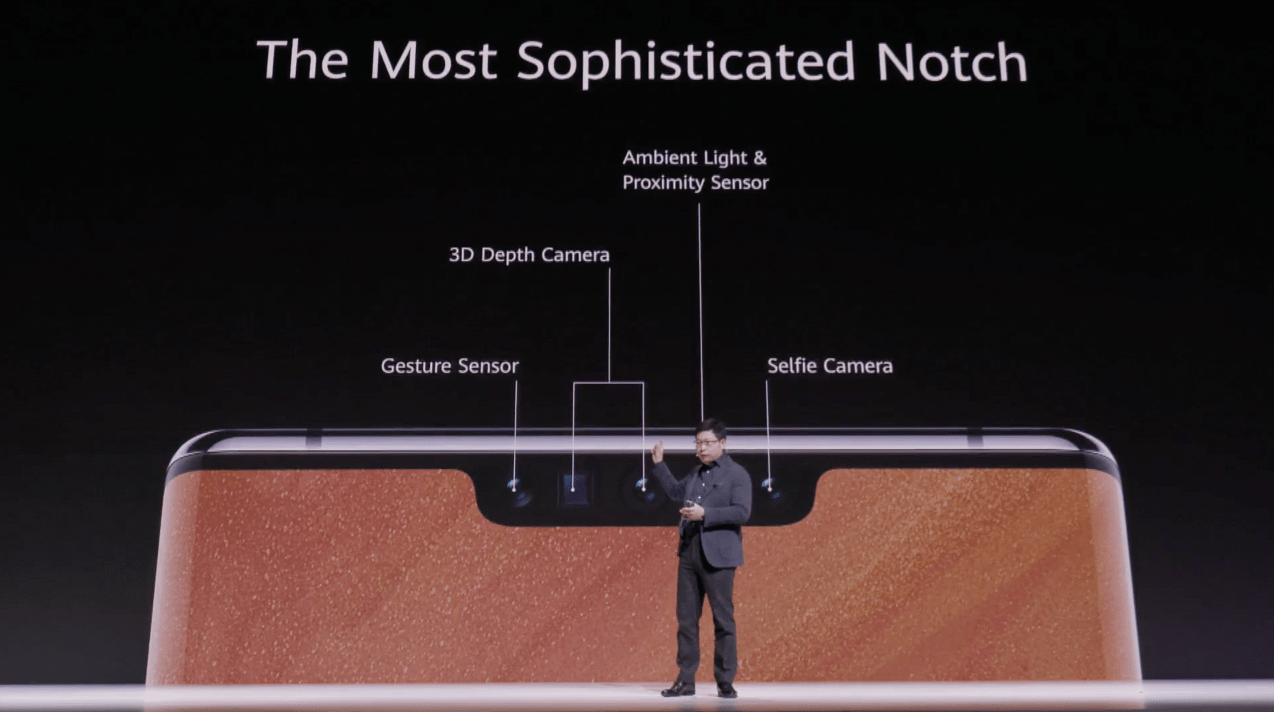 Huawei is also making a big deal of the notch on the Mate 30 Pro, which is packing a quartet of sensors, starting with the 32-megapixel front-facing selfie camera. Next to that is a gesture sensor (much like LG's G8), a 3D depth camera and an ambient light and proximity sensor. The Mate 30 has a far smaller notch, and has just the 24-megapixel selfie lens and the ambient light and proximity sensor. The loudspeaker for both devices is nestled underneath the device.

The Mate 30 series will come in four colors: Emerald Green, Black, Space Silver and Cosmic Purple. All of these have a matte metal gradient finish that is designed to avoid catching fingerprints and the handset sliding out of your greasy palm. There is also a Vegan Leather edition in a green and orange-tinted leatherette, and both models have the same ingress protection as the metal editions. In terms of sturdiness, the Mate 30 Pro is rated for IP68 for water and dust, while the Mate 30 is IP53 -- possibly because it still has a 3.5mm headphone jack, unlike the Pro version.

One software feature of the Mate 30 Pro is both the ability to use Air Gestures, but also something called "AI Rotate." The company says that the phone will look at the position of your eyes and orient the phone's display to meet that position, no matter what the angle. If you receive a message, the system will roll out the preview if it senses you are alone, but just give you only a message notification if you're in company.

As expected, Huawei has teamed up again with Porsche Design to produce a luxury edition of the Mate 30 Pro. The Mate 30 RS comes with a leather backing and a strip running down the middle that eliminates the halo ring around the cameras. This edition comes in red or black, with an additional case that has a finger strap that doubles as a kickstand. And the design is, as usual for Porsche Design's redesign of moribund phones, something of an acquired taste, but that won't matter much if you're looking to buy a smartphone from the sort of high-end department store where you can buy a gold submarine and your own personal ostrich.

The sanctions the US brought against Huawei means that the company can't use Google services, including the Play Store, on this handset. At the event, Richard Yu didn't mention Google by name, but said that the Mate 30 would instead harness Huawei's own app platform, which it already uses in China. And, again, as part of this process, Huawei will pump $1 billion to back developers who will create apps for Huawei's not-quite Android ecosystem. Of course, this is going to be a hard sell for consumers who, at least in the west, see Android and Google as two halves of the same coin.