What we played in October: 'Untitled Goose Game' and 'What the Golf?'

We also dove into "Sayonara Wild Hearts" and the latest "Apex Legends" map.

Welcome back to Engadget's Gaming IRL, a monthly segment where we run down what our editors are playing. This time, it's all about the goose. You know which one. We also dove into one of Apple Arcade's most addictive titles, What the Golf, as well as Sayonara Wild Hearts. And of course, we couldn't help but check out the latest Apex Legends season.

"You either die a hero," Harvey Dent said, "or you live long enough to see yourself become a villain." The protagonist of Untitled Goose Game most certainly falls into the latter category, and it's a sheer delight to experience. Rarely has playing the villain been so fun, and there are a multitude of reasons why the game works. It's the rare title where every aspect works in concert to make an experience that's far greater than you'd expect.

It starts, of course, with the core concept: you're a jerk of a goose causing light mayhem in a lovely British neighborhood. Each section of the neighborhood is accompanied by a chore list, things that include breaking a vase, trapping a young boy in a phone booth, soaking a gardener with his own sprinklers and so on. There's no reasons given as to why you need to do these things. It's just because you're a goose, and geese can be kind of nasty sometimes. It's a quirky, lighthearted concept, even if the core of that concept is that you get to be a jerk.

Of course, this wouldn't be much of a game if it wasn't executed perfectly -- and it is. Developer House House nailed the graphics, sound effects, music and gameplay, all of which combine into a ridiculous, delightful experience. The goose looks great and is animated in a simple but true-to-life style. The fact that there's a dedicated button for flapping your wings is hilarious, and the animation also looks great. The rest of the world is similarly animated in simple, bright colors and shapes -- sometimes with surprising attention to detail in the little objects the goose can pick up and carry around. But none of the humans have faces, which means all the emotions and reactions they have to the chaos you cause are delivered through often-hilarious physical reactions and wordless conversations with other village-dwellers. 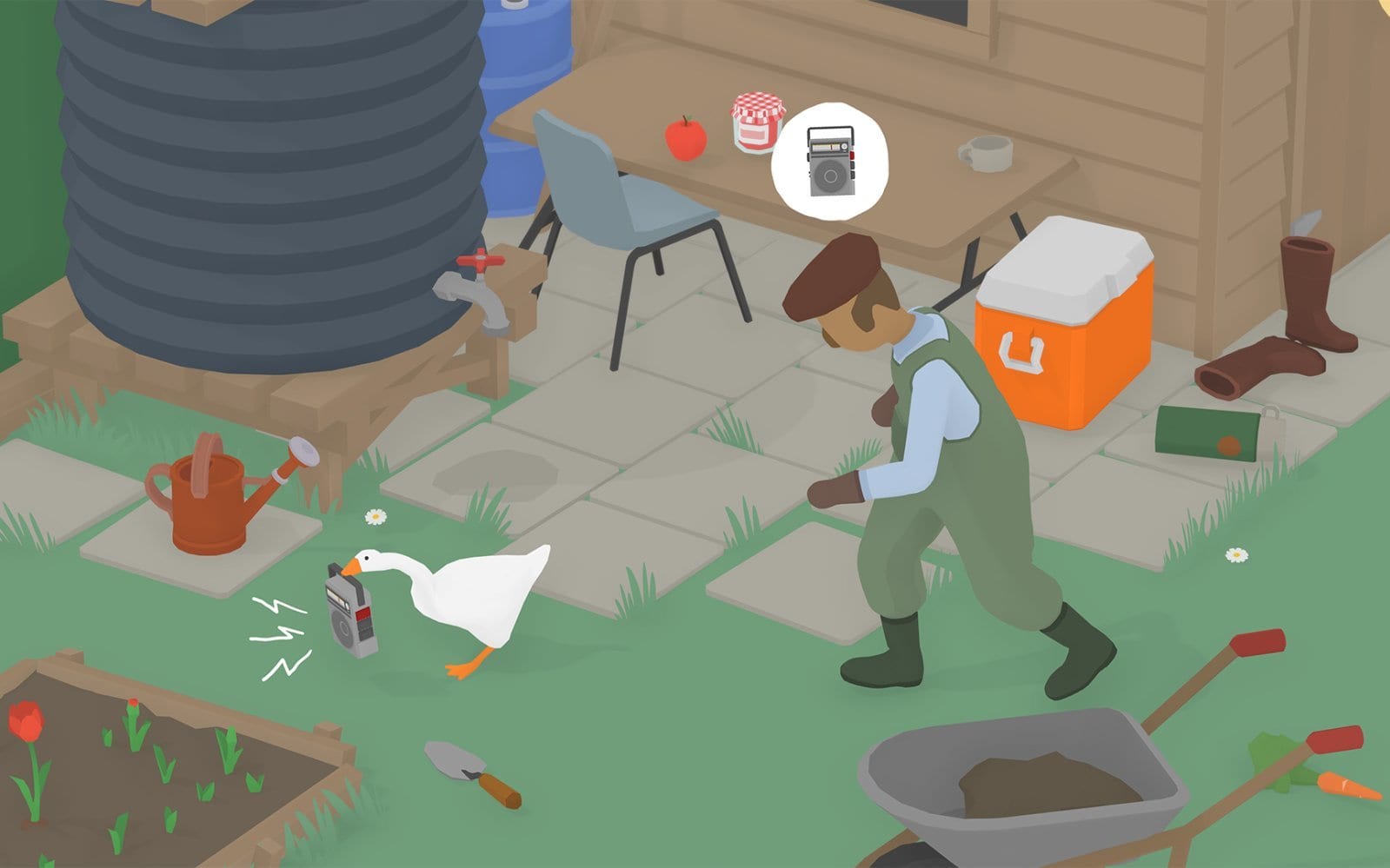 The music and sound effects are similarly minimal but completely appropriate for the game. In fact, the music is one of my favorite things in the entire game. It's a simple, mellow piano score that drops in and out of the game depending on what you're doing. It hilariously ramps up in intensity the more chaos you cause, with dramatic hits punctuating moments where the villagers are surprised by the goose.

But the best thing about Untitled Goose Game is the honk button. It's the first thing you learn how to do, and it's both a useful tool to achieving your devious means, while also being straight-up fun to mash for no reason. The game requires a surprising amount of stealth to check things off your to-do list -- but sometimes I'd get caught by a human and start mashing the honk button, flapping my wings and causing pure mayhem as a way to blow off steam and just goof off. That would often lead me to spend a few minutes just messing up as much stuff in the area as I could, to pay back those nasty humans for catching me in the act.

The only downside to Untitled Goose Game is that it's too short. More accurately, I wish it was longer, but House House made a tight game that doesn't overstay its welcome. And even though I now know how to do everything required to finish the game, I'll definitely drop into the goose's world again, because startling these goofy humans is just too satisfying.

At this point in my gaming career I can usually only keep up with one game at a time. After a nearly two-year stretch of constant Overwatch play, Apex Legends brought me into the battle royale fold and I haven't looked back. The team at Respawn tweaked formulas established by giants in the genre like PUBG and Fortnite, while bringing a feeling I remembered from the Titanfall and Call of Duty games they'd worked on.

And then the map changed.

Apex has been out for less than a year, and its last update is bigger than anything the game had previously seen. While there's still only one large area, players said goodbye to the lush forests and dry deserts of King's Canyon before dropping into the land of fire and ice that is World's Edge.

While I didn't think the game needed a map revamp, I've loved learning a new map that rewards different styles of play, and it seems to have brought back many people who tried the game early on before ditching it.

With a lot of action taking place in urban areas, gameplay is more vertical than ever before, but careful terrain design means snipers don't always rule supreme. I haven't yet gotten the hang of the new character, Crypto, or his drone abilities, but he adds more to the game than he takes away from other characters. I find that he provides the challenge of turning the hunter into the hunted whenever you see one of those machines flying by.

I'm still not sure about Apex's frustrating dual-currency setup and lootboxes. While I'm not overly concerned for myself -- being mediocre at the game means I have very little blame to assign for things I haven't earned -- it's a system that tiptoes around the line of being predatory to collectors. If I want a particular cosmetic, just let me pay for it and decide if it's worthwhile instead of trying to go 50 levels up a Battle Pass or praying for RNG blessings.

The same goes for teammates. While a Halloween event will bring back single player for a limited time, a lot of the fun of the game depends on the commitment of whoever is in your trio. While penalties for leaving early in the game's ranked mode have given players a reason to stick around and see if teammates can help them up, its standard mode could use some Overwatch-like endorsements or LFG to keep everyone's expectations on the same page.

Even with those caveats, I'd recommend giving Apex a shot -- it's free, you can't get cheaper than that -- and if you're on a team with me then congratulations! I bring a 5% winning percentage, inconsistent aim and a constant flow of loot pings, but I won't leave a downed teammate behind if I can help it. It's been a long time since I fell in love with a game as hard and as fast as I have with Sayonara Wild Hearts. It's a gorgeous, thrilling experience about heartbreak that's filled with surprises.

Developer Simogo drew from broad reaches of the cultural spectrum for its stunning work here, packing a ton of ideas into the "On-rails Action Ballet." Sayonara Wild Hearts constantly slings new mechanics at you -- I didn't quite expect it to invoke Titanfall 2, for one thing. I was able to wrap around my head around most of them quickly, but for those I didn't, numerous checkpoints meant I didn't have to retread my steps too much.

Most levels clock in at under a couple of minutes and I finished my first runthrough in a little over an hour. Stages often felt a hair too short to me, though. I wanted many of them to last a bit longer, but I'll be replaying this often enough that it's not a major concern. Meanwhile, playing on Apple Arcade, I found it much easier to use a DualShock 4 than to frantically swipe across my iPhone's screen.

And then there's the glue that holds it all together: that sublime soundtrack by Daniel Olsén and Jonathan Eng. It's an umami bomb for the ears that I've been mainlining almost non-stop since my first playthrough. It's filled with techno-pop gems ("Mine" and "Inside" are particular faves), and it works flawlessly with the rest of the game's rhythms. I expect I'll be bopping along to those tunes for a while yet.

During my recent trip to the Oculus Connect conference, I thought I had all my gaming needs solved with the Nintendo Switch. I loaded it up with Fire Emblem Three Houses, Hollow Knight and plenty of games I've been planning to spend more time with. Then I started playing What the Golf, which I downloaded on a whim as part of Apple Arcade, and I couldn't stop.

For the majority of my five and a half hour flight to San Jose, I carefully plotted golf trajectories and sussed out the solutions to some of the game's more nefarious puzzles. What the Golf starts out as a mere golf game -- then you start throwing your character around the stage to hit the flag. Before long, you're introduced to an overworld where your sentient golf ball has to complete levels and fight an evil computer. It turns out, it's anything but a normal golf game.

Triband, What the Golf's developers, describe it as a "physics-based golf parody." That's an understatement. It's not just a fun spin on the rules of golf, it's a love letter to classic and modern games. It transforms the mechanics of a platformer into something you could play with a golf swing. Somehow, it turns everything into golf. (I won't spoil it's many wonderful references.)

What the Golf is basically the perfect phone game. You can play it mostly one-handed, and it's the ideal thing to load up when you're exhausted and don't even have the energy to hold up a Switch Lite. And yes, it's another sign that Apple Arcade is one of the best deals in gaming today.