The company's on-ear model is getting a big upgrade.

If you wanted active noise cancellation (ANC) on a pair of Beats headphones, you had one choice: the Studio3 Wireless ($349.95). That changes today. The Solo Pro ($299.95) brings ANC and more to the Apple-owned company's on-ear model. They cost $100 more than the previous version, the Solo3 Wireless, but this new model also packs Apple's H1 chip for audio sharing, fast pairing and always-on Siri access.

Like the over-ear Studio3 Wireless, the Solo Pro uses Beats' "Pure Adaptive Noise Cancelling" or Pure ANC tech that has been tuned for the on-ear headphones. If you're unfamiliar, Pure ANC is an algorithm-based feature that's "continuously" listening to your surroundings and adjusting based on noise levels. Pure ANC can also account for sound leakage due to hair, earrings, ear shapes and more -- issues that plague the sound quality and effectiveness of ANC with on-ear headphones. Like most noise-cancelling headphones these days, the Solo Pro has a transparency mode so you can quickly hear what's going on around you. And it's activated with a single button press.

Thanks to Apple's H1 chip, the same component that's found inside both the Powerbeats Pro and the latest AirPods, Siri is always ready for your commands. You don't have to press a button to summon the assistant. The H1 chip also allows you to share audio with other Beats headphones that have it or the W1 chip. Even while you're listening with someone else, you can still employ Pure ANC and transparency mode as needed. And like the W1 before it, the H1 chip offers quick pairing with iOS and Mac devices so you don't have to tap around a Bluetooth menu to get connected. 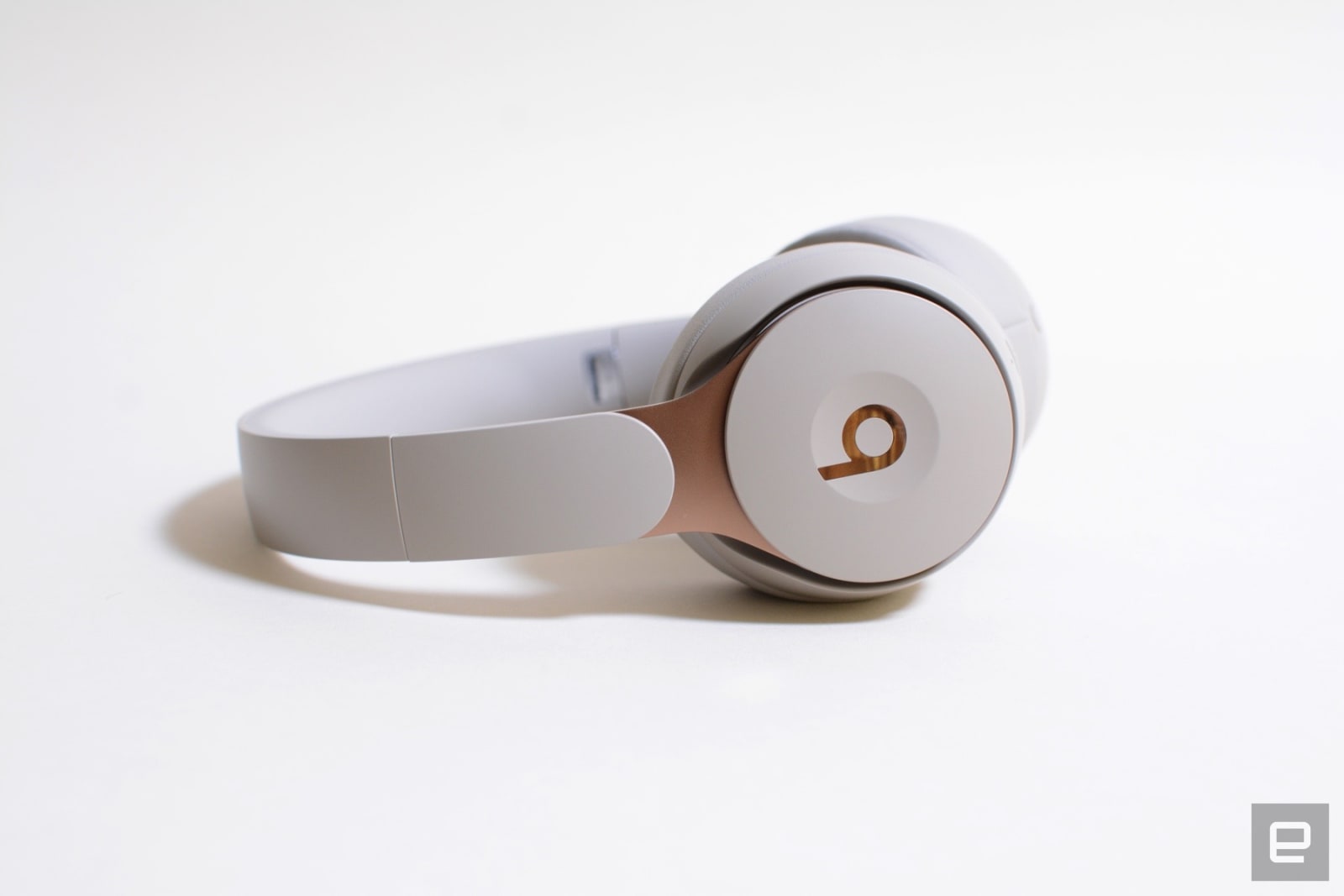 One noticeable design change is the headband. The clicky adjusting action has been replaced by a smooth gliding slider. The tweak should also help you find a more comfy fit, along with new ear cushions and a redesigned enclosure. It also looks a lot better. As we saw on the latest Sennhesier Momentum Wireless headphones, the Solo Pro doesn't have a power button. You turn them on by unfolding them, and they turn off when you fold them up. On the right earcup, there are on-board controls to answer calls, play/pause music, skip tracks control volume and activate your voice assistant (if you're not using Siri). There's also a single button on the right that toggles between Pure ANC, transparency mode and turning both off entirely.

Beats promises up to 22 hours of listening time if you have ANC or transparency mode enabled. If you turn both of them off, that figure increases to 40 hours -- the same amount of time as the non-ANC Solo3 Wireless. The Solo Pro charges via Lightning cable and thanks to a Fast Fuel quick-charging feature, you can get three hours of "full-featured playback" in 10 minutes. 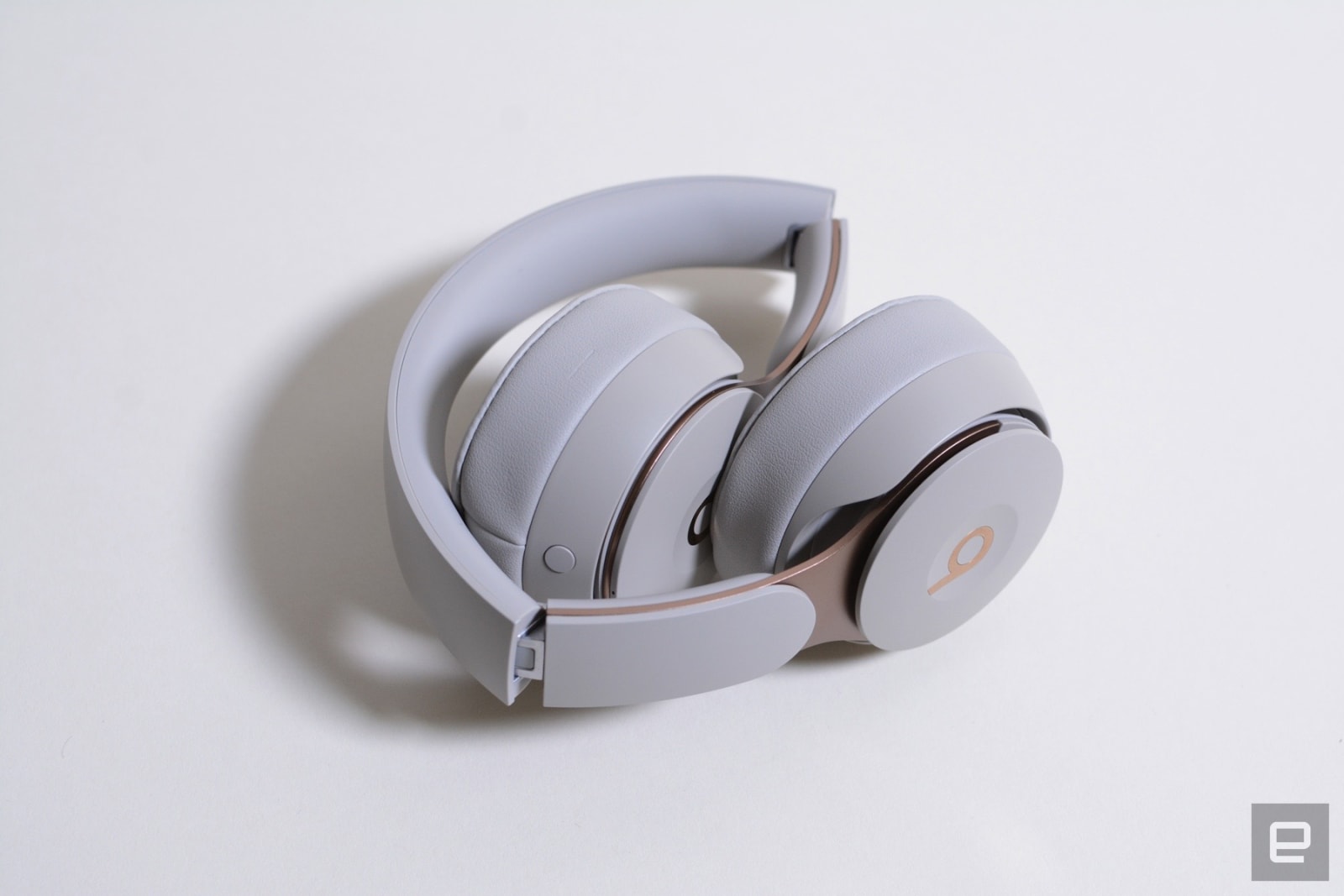 I spent a few minutes listening to the Solo Pro and the Pure ANC is impressive. Sometimes with on-ear noise-cancelling headphones, the ANC isn't nearly as effective as over-ear models. While I didn't have aStudio3 Wireless set there to directly compare, the Solo Pro did an impressive job blocking out some artificial train noise in the demo room. Transparency mode also performed well. I've used a similar feature on other headphones before, but with some, you feel like you have to shout when you're speaking to someone with them on. That's not the case here.

In terms of overall audio, the Solo Pro continues Beats' recent tendency towards more even-handed bass. Like the Studio3 Wireless and the Powerbeats Pro, there's plenty of low-end tone, but it's never overpowering. The clarity here is also really nice. Elements like snare drum hits on indie rock tracks are crisp and clean. Other instruments and sounds are allowed to stand on their own, rather than sounding like a compressed wave of noise being forced into your ears. I'll need more time to judge the merits of the Solo Pro over the course of several days and across more genres, but what I've heard so far is more of Beats' more recent preference toward balanced tuning. And that's definitely a good thing.

The Beats Solo Pro goes on sale October 30th for $299.95. When it does, you'll be able to choose from black, ivory, gray, dark blue, light blue and red color options. Pre-orders begin today at apple.com.

All products recommended by Engadget are selected by our editorial team, independent of our parent company. Some of our stories include affiliate links. If you buy something through one of these links, we may earn an affiliate commission. All prices are correct at the time of publishing.
Beats' Solo Pro headphones feature Pure ANC and always-on Siri
active noise cancellation
anc
apple
audio
av
beats
bluetooth
entertainment
gadgetry
gadgets
gear
h1
h1 chip
hands-on
noise cancelling
on-ear
onear
siri
solo pro
wireless