'Avengers Damage Control' is the ideal VR follow-up to 'Endgame'

You can finally fight alongside your favorite Avengers in VR.

If you're still emotionally wiped out by Avengers Endgame, The Void and ILMxLAB's latest VR entry might soothe your geeky soul. Avengers Damage Control is more than just a mere virtual reality game, like the upcoming Iron Man title for the PlayStation VR. Instead, it's a prime example of what The Void does best: Building large-scale multi-player VR experiences mapped to physical sets. It's a dream come true for anyone who's ever wanted to fight alongside their favorite Marvel superheroes -- just be prepared to shell out $40 to experience it.

Suiting up for Damage Control involves strapping on one of The Void's backpack computers, as well as a huge VR headset. It's clearly not consumer hardware -- the backpack weighs over 20 pounds, though the weight is distributed evenly with chest straps. The custom headset easily fit over my glasses, but I had to spend a few moments tightening the rear and overhead strap dials to balance it comfortably. Thankfully, you won't have to worry about removing it until the experience is over, since you can easily flip up the display to see the real world.

The Void's hardware is certainly complex, but it's also customizable for a wide variety of users. I teamed up with a mother and daughter vacationing from England, and even though they'd never experienced VR before, they were able to put on everything easily. It was a bit of a shock to see themselves (and me) in VR, but they got over that quickly. 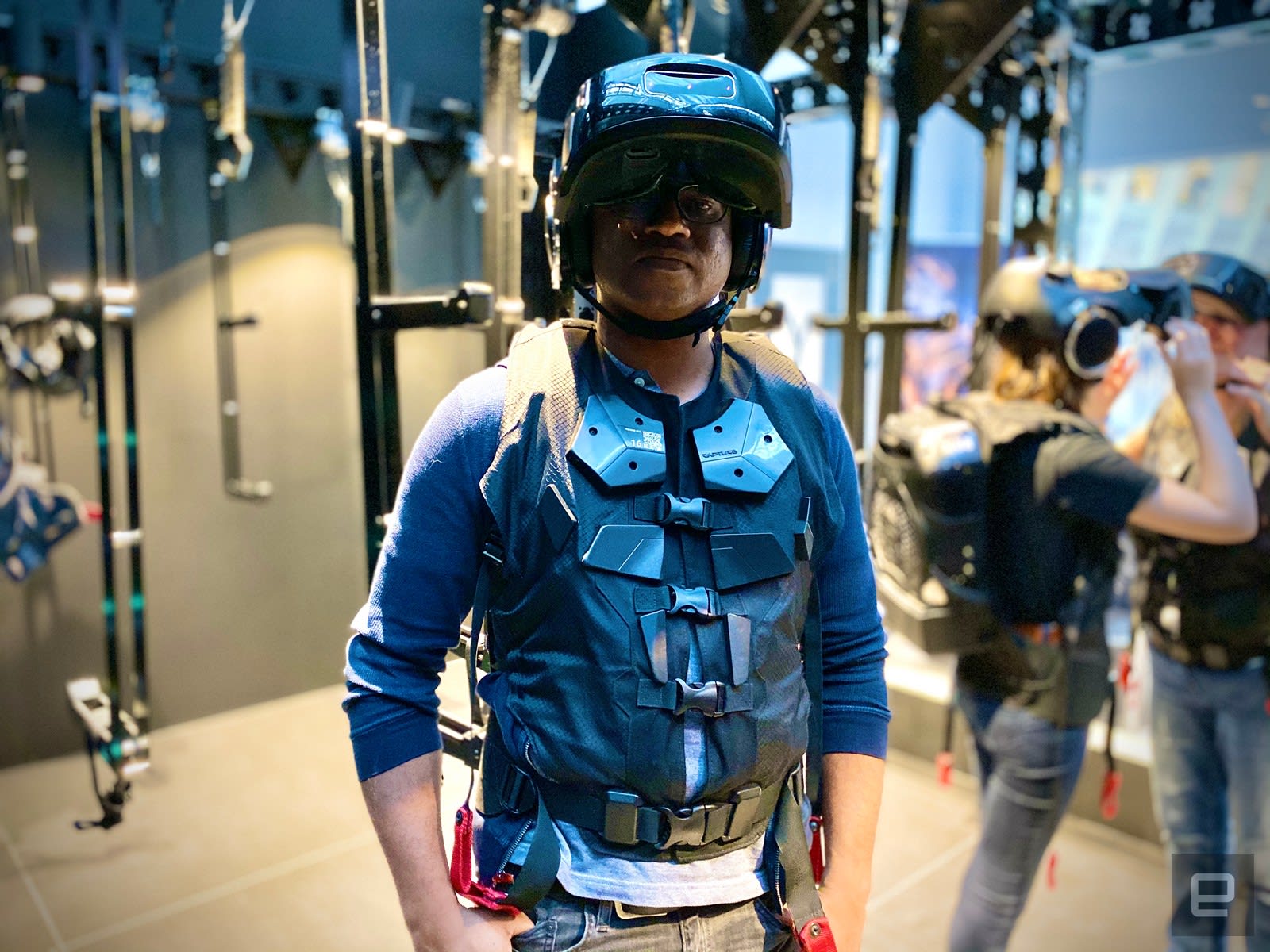 Damage Control puts you and up to three other companions in prototype Iron Man-esque suits, developed by Black Panther's Shuri. They're technically a combination of Stark and Wakandan technology -- they've got vibranium skins, but also feature Iron Man's iconic palm blasters. Unlike The Void's Ghostbusters: Dimension and Ralph Breaks VR, there aren't any guns to carry. Instead, you use hand gestures (which are detected by Leap Motion sensors in the VR helmet) to direct laser blasts. Holding one hand up sends out a single shot, while two hands unleashes a super-charged beam. You can also hold your arms out to create an energy absorbing shield, which, like Black Panther himself, can be charged to unleash a devastating attack.

After a training sequence goes awry (of course), you're thrust into the meat of Damage Control: Ultron is back! And his robotic minions are wreaking havoc across the world. Your mission is to help the Avengers deal with the onslaught of baddies and eventually, take on Ultron himself. Along the way, you'll encounter familiar faces like Ant-Man, The Wasp, Spider-Man and Doctor Strange. Paul Rudd, Evangeline Lilly and Benedict Cumberbatch reprise their roles from the films, while other characters are played by voice actors doing their best impressions of the stars you know and love.

Like all of The Void's experiences, Damage Control has you walking through physical rooms, which are recreated within the VR world. If you see a wall or railing, you'll actually be able to hold onto it with your hands. That's helpful for navigating the set, which consists of a small series of rooms that you end up circling. Every Void experience feels like a weird hybrid of a haunted house and a film set -- you're still moving around an actual space, but there's a VR veneer that makes you think you're actually walking down the staircase to Doctor Strange's library. 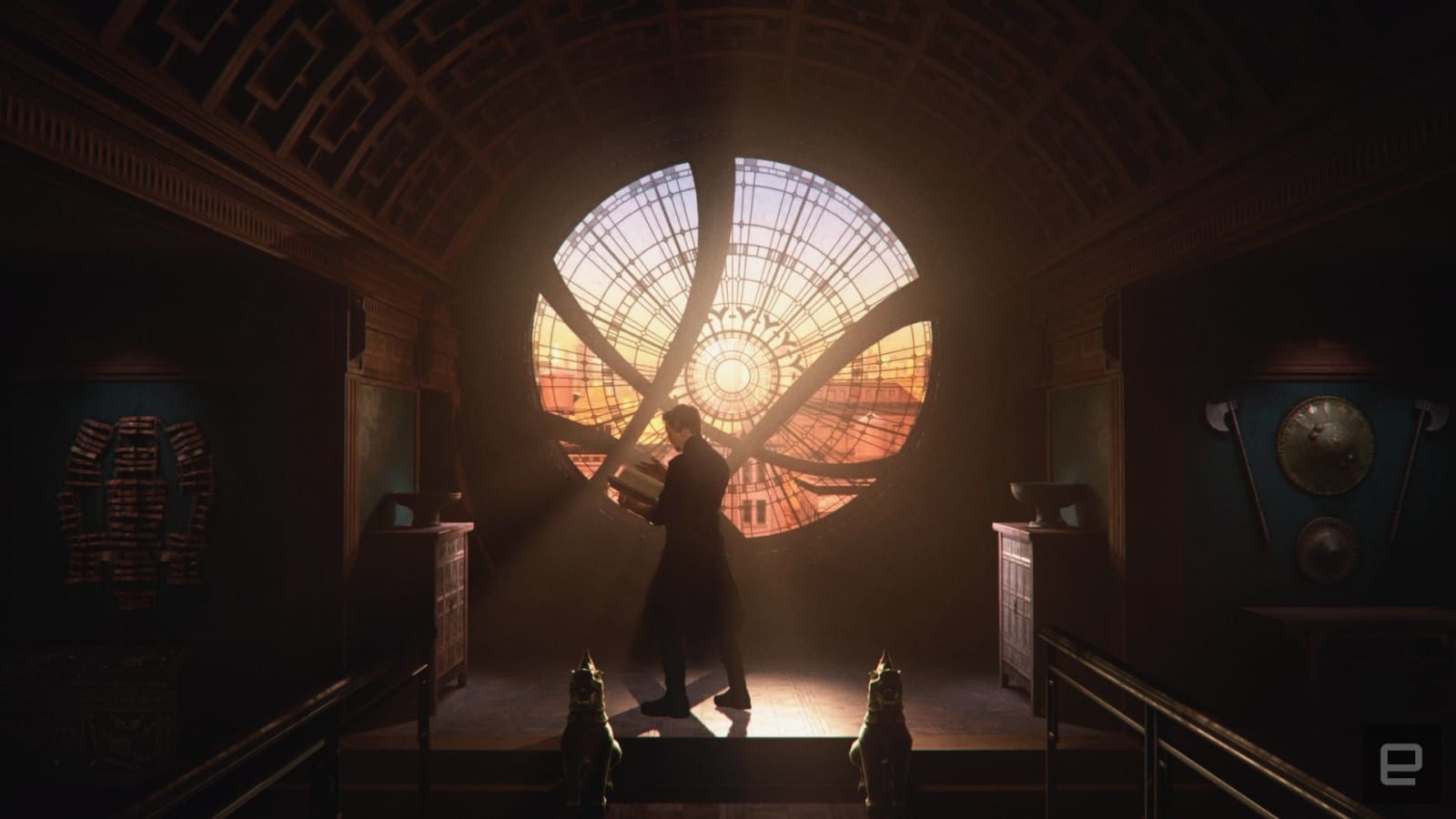 I won't spoil too much of Damage Control here, but I can say it involves plenty of robot blasting, superhero banter and huge set pieces. It was a smart move to go with hand gestures, instead of guns, since it made me feel like I was actually belong fighting beside the Avengers. The experience also makes some fine use of scale. At one point, I was miniaturized alongside Ant-Man and some giant popcorn as the scent of freshly popped kernels fills the room. Eventually, I encountered a super-sized version of Ultron for the finale. While you could just show those scenes on a 2D screen, it's a completely different thing being confronted with huge objects in VR, where you actually feel like a giant robot is looming above you.

As a multi-player experience, Damage Control is yet another great example of The Void's strategy, which emphasizes going through a scenario with other people in the same room. Whereas most VR games are solo affairs, The Void's have you building up a unique sense of comradery with your teammates. I couldn't really tell if my companions were huge Avengers fans, but they clearly had fun taking on evil robots. We organically came up with attack strategies as Ultron's minions filled the room, and supported each other as we figured out where to go next. It's the sort of communal experience that truly sells VR's potential as a new interactive medium.

At its best, Avengers Damage Control feels like you're taking part in a large-scale superhero battle. And while it's not technically a part of the Marvel Cinematic Universe canon, it still feels like it belongs there. The only major downside is that it'll cost you $40 a pop. That's twice the price of a 3D IMAX ticket in New York City, and for many it might not be worth it for a 15-minute experience. You'll be able to play Avengers Damage Control at Void locations in NYC, Atlanta, Santa Monica and elsewhere for a limited time.