And yes, the Shield TV doesn't really look like a TV streamer at all.

NVIDIA's new Shield TV devices rival the Pixel 4 for the most leaked gadgets of the year. We got an almost complete run-down of the $200 Shield TV Pro a few weeks ago, and shortly afterwards, we learned about a new cylindrical $149 Shield TV. Well now, NVIDIA is finally confirming the existence of its two Android TV devices -- you can snag them today ($149+).

The first thing you'll notice is that the cheaper model looks... a bit different than your typical set-top box. It's a cylinder that's meant to sit among the wires behind your TV. According to NVIDIA, that helps it avoid wireless interference. And if WiFi streaming isn't your thing, the company also included a gigabit Ethernet port. The Shield TV Pro, meanwhile, has the same case as the last model, along with two USB 3.0 ports and 3GB of RAM (the standard Shield TV has 2GB).

Both new set-top boxes feature Dolby Vision and Atmos decoding support (the last Shield only offered Atmos pass-through and HDR 10). They're also powered by NVIDIA's new Tegra X1+ processor, which the company claims is 25 percent faster than the X1. That doesn't really mean much when it comes to streaming video apps, but the additional horsepower gave NVIDIA room to develop an AI-powered HD to 4K upscaler, which can help lower-resolution content look better on 4K TVs. 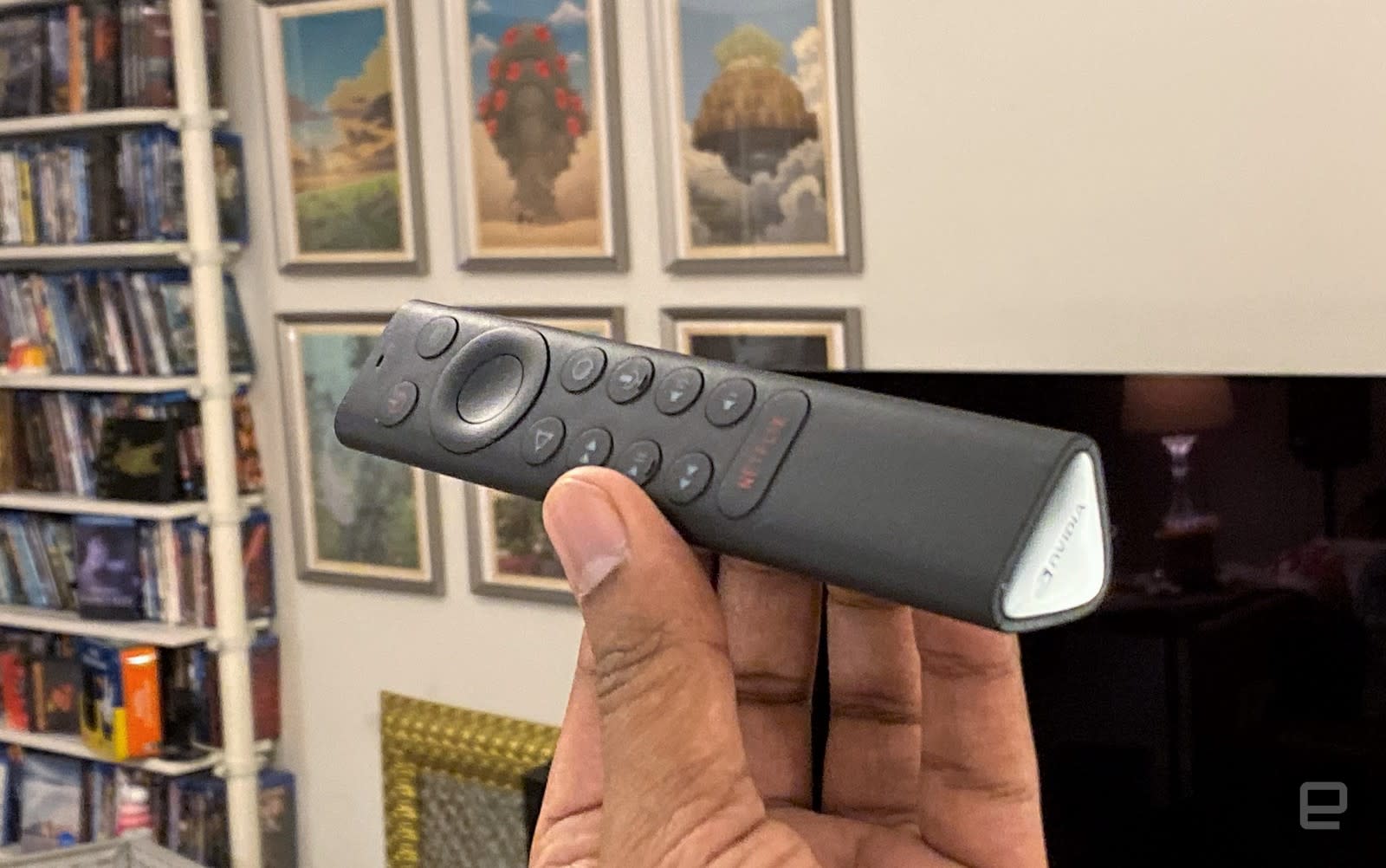 Sure, your TV already does HD upscaling on its own, but NVIDIA says its technique goes a step further. The company fed HD and 4K video samples to a neural network, which helped them build a model that can fill in gaps that typical upscalers miss. On a 65-inch OLED TV, NVIDIA's AI upscaler delivered more fine detail in a Game of Thrones character's robes. I was still looking at an HD feed from HBO Now, but it had an extra bit of sharpness that resembled genuine 4K footage.

While watching an HD stream of Coco on Netflix, the colorful City of the Dead was far sharper with NVIDIA's upscaler. I could actually make out the houses and buildings floating in the background, whereas it looked like a muddy mess without the feature. The company did warn that the AI upscaler might not work well with older content, since it was mostly trained on high-quality modern footage. But, just like any AI model, NVIDIA plans to improve it over time. 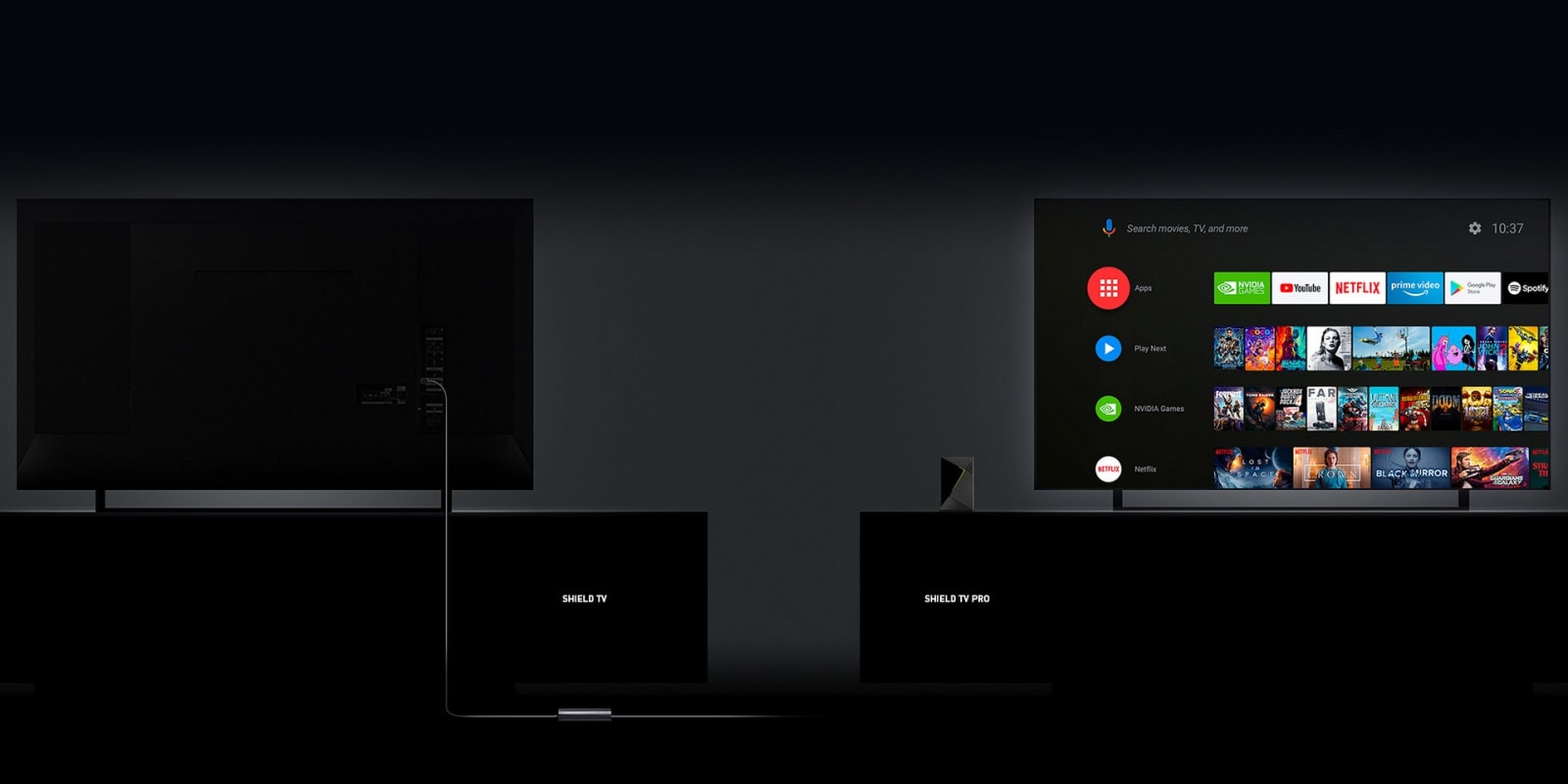 Instead of following in Apple's footsteps with its new Shield TV remote, NVIDIA opted for a truly unique triangular controller. It resembles Neil Young's oddball Pono music player, but at least it's not something you're meant to put in your pockets. While it looks awkward, the new Shield remote is more comfortable to hold than the last model (ironically, its larger size helps with that). There's also a lost remote locator if you manage to misplace it, and the buttons also helpfully light up whenever you move it. You can still opt for NVIDIA's $59 Shield controller if you're planning to play games, but now you can also pair up any other Bluetooth gamepad.

At $150, the new Shield TV is a more compelling purchase than its predecessor, which launched at $200. You'll get all of the benefits of NVIDIA's new hardware, including that AI upscaler, as well as all of the features of the Android TV ecosystem, like built-in Google Assistant support. And just like before, you'll also get beta access to NVIDIA's GeForce Now streaming service, which lets you play plenty of modern games for free. If you'd like to add more storage or run a Plex server, though, then the Shield TV Pro remains your best option.