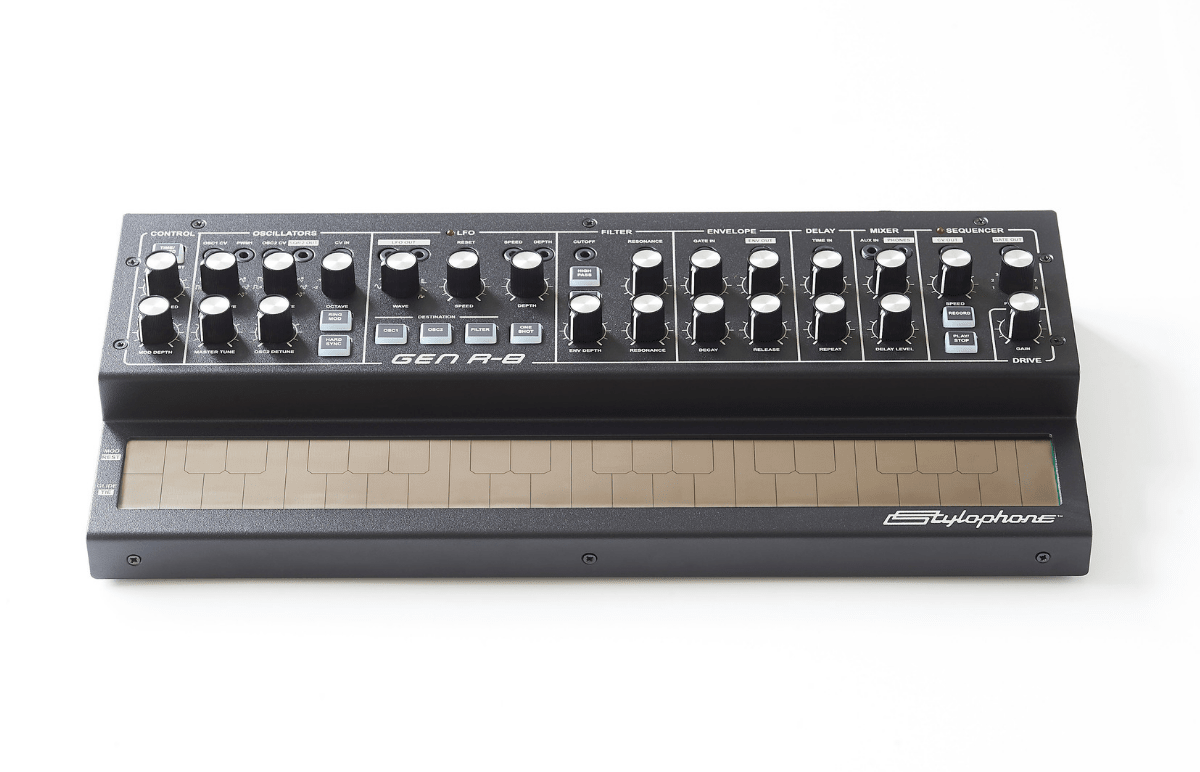 After missing its originally planned February release, Dubreq's latest Stylophone synthesizer is now available for purchase. This upgrade to the pocket-sized classic boasts new features and controls, an all-analog circuit and a hefty metal chassis. Most importantly, it has gritty tones and filters similar to the sounds of full-fledged monosynths.

The Gen R-8 isn't just a big version of the tiny Stylophone Portable Synthesizer from the '60s and '70s. Users have expanded tone-shaping options, like two oscillators, an LFO, a filter, an ADSR envelope and more, so they can create monophonic melodies and arpeggios. And the one-knob-per-function layout means there are no cryptic menus to scroll through when tweaking sounds.

Like the Stylophone models that came before it, what makes the Gen R-8 stand out is its lack of a traditional keyboard. The original Stylophone used a touch-sensitive strip, which was activated with a stylus. This allowed for smooth gliding from note to note to create unique sonic qualities, rather than hammering one key after another. The Gen R-8's control surface is much larger, allowing for finger playing rather than using a stylus.

If you've had a longstanding interest in the Stylophone, the Gen R-8 might be worth a purchase, especially considering the $349 price -- pretty low for a fully analog synth. However, if you're just looking to get in on the funky control surface, Arturia's MicroFreak features similar touch-sensitivity at the same price while also offering a more flexible sound engine. That said, purists are more likely to appreciate the Gen R-8's conventional, subtractive signal chain. If you do want to try the Gen R-8, you might want to grab one sooner rather than later. This first run is limited to 500 units.

In this article: dubreq, gadgetry, gadgets, gear, monosynth, music, music production, stylophone, stylophone gen r-8, Synthesizer, synths
All products recommended by Engadget are selected by our editorial team, independent of our parent company. Some of our stories include affiliate links. If you buy something through one of these links, we may earn an affiliate commission.