Adobe has just released major updates to Creative Cloud apps like Photoshop, Premiere Pro, After Effects and Lightroom. On top of the usual speed and productivity enhancements, many of those have gained time-saving features powered by Adobe's AI Sensei algorithms, some of which we saw in sneak peaks.

First off, Adobe has upgraded its Creative Cloud desktop program that gives you access to all the other apps, along with content like fonts and stock photos. As you may have already seen (the app rolled out late last month), it's now a much bigger app on the screen, and includes a native search engine you can use to find Creative Cloud assets, files and tutorials. "It also features new ways to access services such as Adobe Fonts, Adobe Stock and Behance, as well as a new full-screen management tool for Creative Cloud Libraries," Adobe wrote in a news release.

Moving on to the apps, Adobe Premiere Pro has been updated with Auto Reframe, a feature that lets you transform 16x9 horizontal into vertical video that's better suited to smartphones. The AI can automatically hone in on the most important parts of a shot, and scan or reframe to best show them. 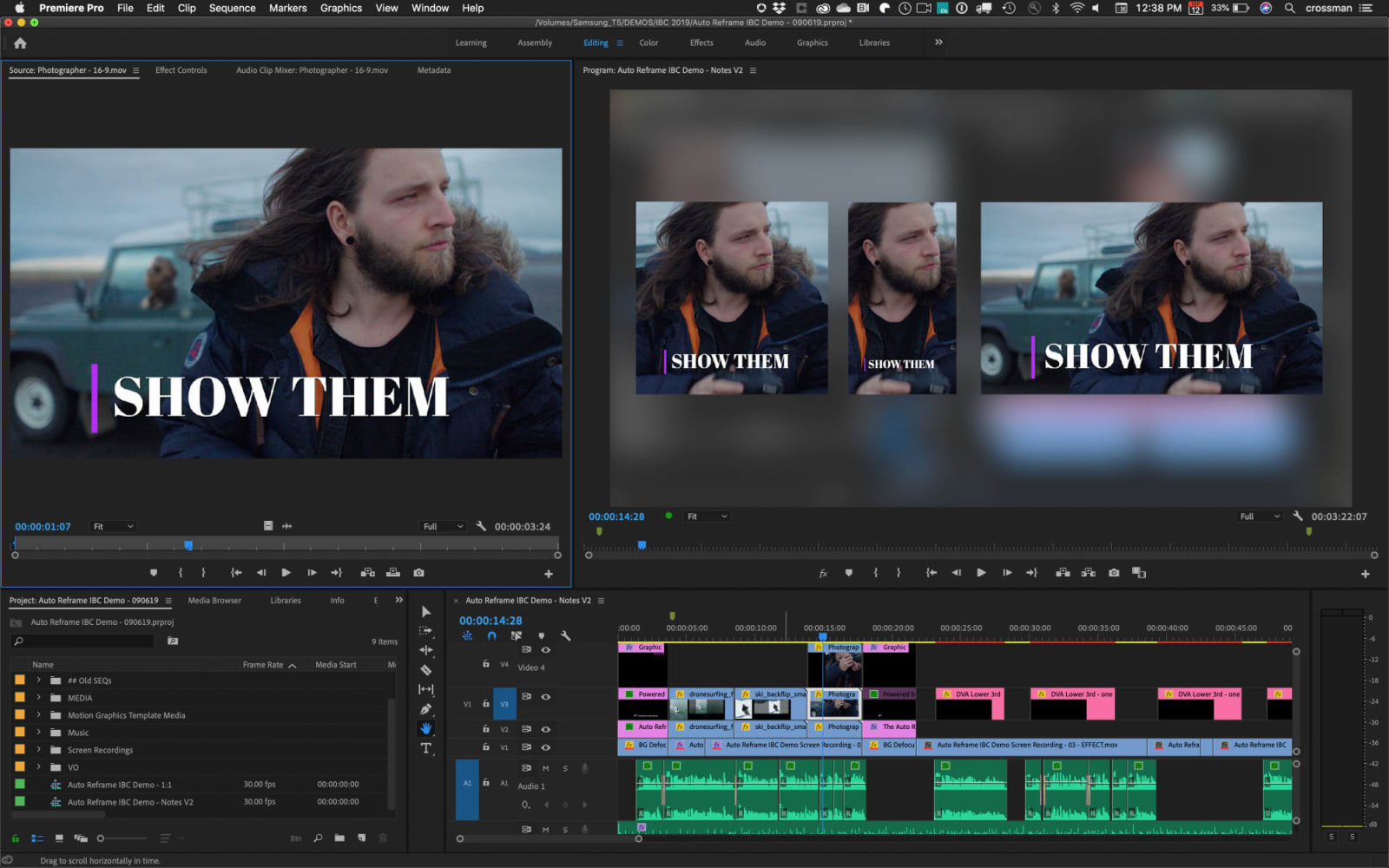 On top of that, Adobe has improved the essential graphics panel to make it easier to work with shapes used to select, name and re-order layers for creating titles and graphics. Premiere is also faster when you work with ProRes HDR, and improves for H265, HEVC and Apple ProRes formats (hopefully in the areas of speed and stability). Finally, audio gain headroom has been boosted to +15dB and time remapping can now be changed up to 20,000 percent more, to give you more creative options for speed changes. Finally, NVIDIA has new Premiere Pro RTX Studio drivers that deliver more speed and AI power.

Photoshop now has the object selection feature we also saw in a sneak preview. This could be one of the most useful Photoshop features ever, allowing artists to remove unwanted objects in shots without (or with less) painful tracing. The Sensei AI engine can tell the background from the subject, and even pieces of the subject, to make an accurate outline. It won't do a perfect job on each subject, but it'll do the bulk of it to save artists a lot of time.

Adobe has also cut down on the navigation steps needed for tasks in the properties panel and overhauled the preset panel workflows. "These improvements make up some of the all-time top requests across all customer types," Adobe said. There are a number of other enhancements to features like content-aware fill, smart objects, transform warp, 32-bit HDR images and more. For the full picture, check out this post.

Meanwhile, After Effects got a much-needed speed boost, and now delivers smooth, fluid playback of cached previews, faster Multichannel EXR files, and a faster content-aware fill that uses half as much memory," Adobe said. Lightroom CC has gained a feature that's been on Lightroom Classic for awhile, letting you automatically fill the edges of photos using content-aware fill tech. And Illustrator can now open files twice as fast and continuously save in the background.

All of these features are no longer fancy demos, but features you can actually use -- provided you have an Adobe Creative Cloud subscription. If you don't want to pay a monthly subscription, remember that there are a number of free or cheaper options.