Xiaomi has unveiled the CC9 Pro smartphone that has one of the highest-resolution cameras -- period -- that you can buy. For instance, the 108-megapixel wide-angle camera has more resolution than Fujifilm's 102-megapixel GFX 100 medium format camera, which has a sensor about 15 times larger. On top of that, the CC9 Pro has four other rear cameras: a 5-megapixel 5x telephoto, 12-megapixel 2x telephoto, 20-megapixel ultra wide-angle lens and a 2-megapixel macro camera with big 1.75um pixels.

As we reported earlier, Samsung developed the 108-megpixel ISOCELL Bright HMX sensor in conjunction with Xiaomi. As a 1/1.33-inch type sensor, it's pretty big -- about three-quarters the size of the 1-inch sensor on Sony's RX100 VII, or slightly smaller than sensor used on Nokia's classic, bulging PureView 808 smartphone camera.

The 5-megapixel 5x camera supports hybrid zoom levels from 10x to 50x, giving this phone a pretty impressive zoom range. As you can see by the image below taken at Xiaomi's event in Beijing, however, there is another option. You could just snap a 108-megapixel photo and just crop in to take advantage of the epic detail captured by this sensor. 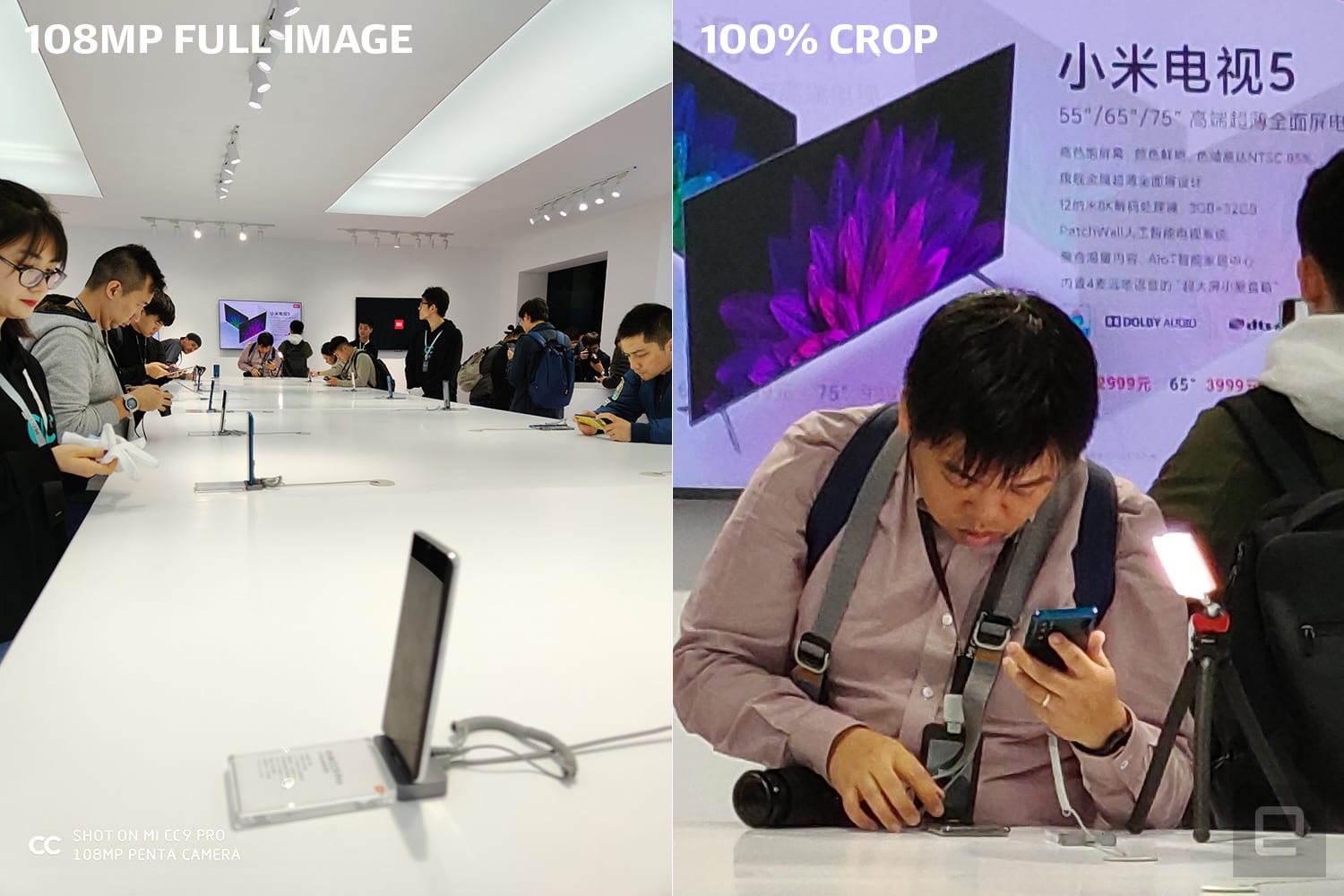 With that resolution, however, it has tiny .8 pixel pitch, so it won't work very well in low light. By default, it will operate as a 27-megapixel camera as Samsung's Tetracell tech joins four pixels together. If you have enough light, though, you can shoot with all 108 million pixels to "produce billboard-level prints up to 4.24 meters high," Xiaomi boasted.

The ultra wide-angel 20-megapixel camera has a 117-degree field of view, and there's a front 32-megapixel camera. To ensure jitter-free shots, the CC9 Pro has a 4-axis optical image stabilizer and uses Xiaomi's ShootSteady tech to smooth out 4K video. It has slo-mo speeds up to 960 fps, and even has a Vlog video mode to maximize dynamic range.

As with Huawei's P30 Pro and the Pixel 4, the smartphone also packs Xiaomi's all-new Night Mode 2.0, which combines multiple shots to reduce noise. It can also capture RAW photos in low light using multi-frame noise reduction. Alternatively, you can take advantage of one of the two LED lights on the rear -- there's a torch light for a general brightness boost, and there's also a soft light for portrait shots.

Apart from the cameras, the CC9 Pro's standout feature is the gigantic 5,260 mAh battery that should give it impressive endurance. Other features include an edge-to-edge 6.47-inch curved FHD+ AMOLED display and Snapdragon 730G mobile platform.