Volkswagen’s attempt at a bold, cleaner future starts with the ID.3

The automaker’s Zwickau factory is the first to get an EV refresh.

With much pomp and circumstance, the first all-electric ID.3 produced at Volkswagen's Zwickau plant rolled down a hall of flashing lights and pulsating music. A badge on the fender signifies it's one of the "1st" of a 35,000 run of vehicles pre-ordered by early adopters. The ID.3 is more than a new vehicle, it's a sea change at one of the largest automakers in the world.

The ID.3 is Volkswagen's future. The automaker considers this vehicle to be as important to the company as the Beetle and Golf. It's so important that the Zwickau factory where we're standing is being transformed from producing Golfs to electric vehicles. It's about halfway there but this entire journey started in shame.

In 2015, authorities were informed by researchers that Volkswagen's diesel engines were cheating emissions tests. When hooked up to emissions equipment the cars would go into a special mode and reduce the amount of pollution they spewed. But during regular driving, the cars were adding more pollution to the air then they should have been.

But judges, governments and customers rightfully wanted more. In additional to buyback programs, and paying hefty fines, the automaker had to do things like produce ads touting how great EVs were and building charging infrastructure in the United States. But the scar on Volkswagen also kick-started the company's transition to EVs. 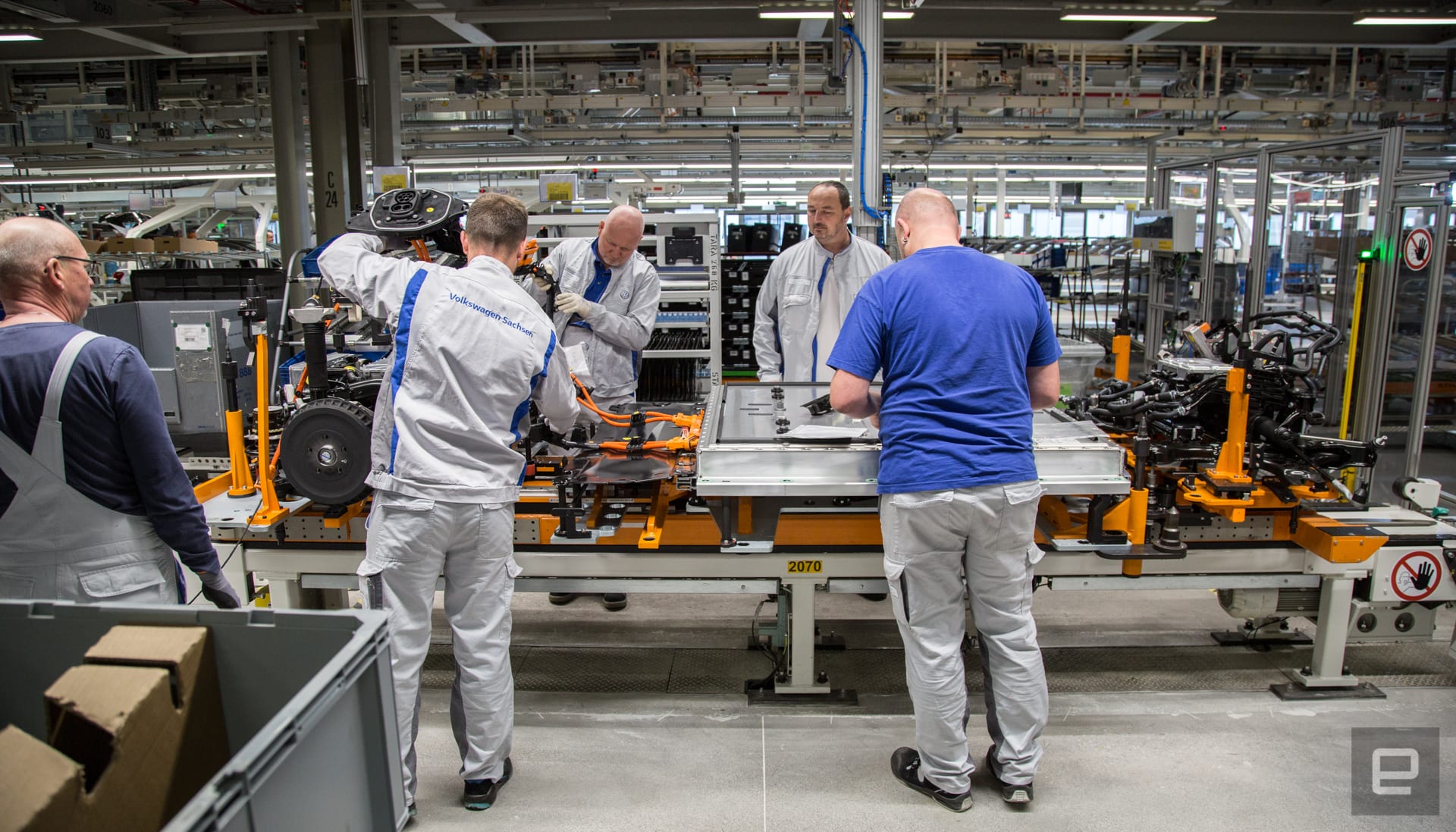 That's where the ID.3 comes in. It's not the first EV from the company. It currently sells the impressive E-Golf mid-range BEV (Battery Electric Vehicle). But this new car and all the electric vehicles after it are based on the MEB platform. A modular floor that's built from the ground up specifically for battery packs of varying sizes.

That MEB platform will be the basis of the upcoming crossover ID.4, the retro Buzz bus, the whimsical Buggy and a whole host of new Volkswagen vehicles. The platform will also be used by Ford to help the US automaker make its transition to electrification. The automaker wants to be a global powerhouse of electrification and it already has a plant putting the first car together.

The ID.3 will be available in three battery sizes (45kWh, 58kWh, 77kWh). The lowest will start at €30,000 (about the price of a Diesel Golf). Zwickau is already producing the ID.3 and it's the first of four factories that will build vehicles on the MEB platform.

At Zwickau, the change over will cost €1.2 billion and requires the retraining of the facility's 8,000 employees. Getting employees up to speed started two years ago and continues as the company transitions the entire plant to MEB vehicle production. The plan is to complete the change over by the end of 2021. At that point, 90 percent of Zwickau will have undergone a production line transformation

On the factory floor, first editions of the ID.3 move along the line. Newly trained employees and robots marry the body to what's essentially a skateboard that consists of the battery pack, suspension and motor. In the future, more of these tasks will be automated but all 8,000 employees are guaranteed positions until at least 2029. Building cars still needs, and will continue to need, people.

Currently, only one of the two lines has been replaced. It happened over a 12-week period this summer. But by 2022, both lines will be producing ID vehicles. The first will be the ID.3 followed by the ID.4.

The area around the factory is filled with Golfs. The vehicle has done very well for Volkswagen. More than any other car in its lineup, the Golf is iconic. Replacing a best-seller with EVs at Zwickau is a sign of the automaker's commitment to electrification. 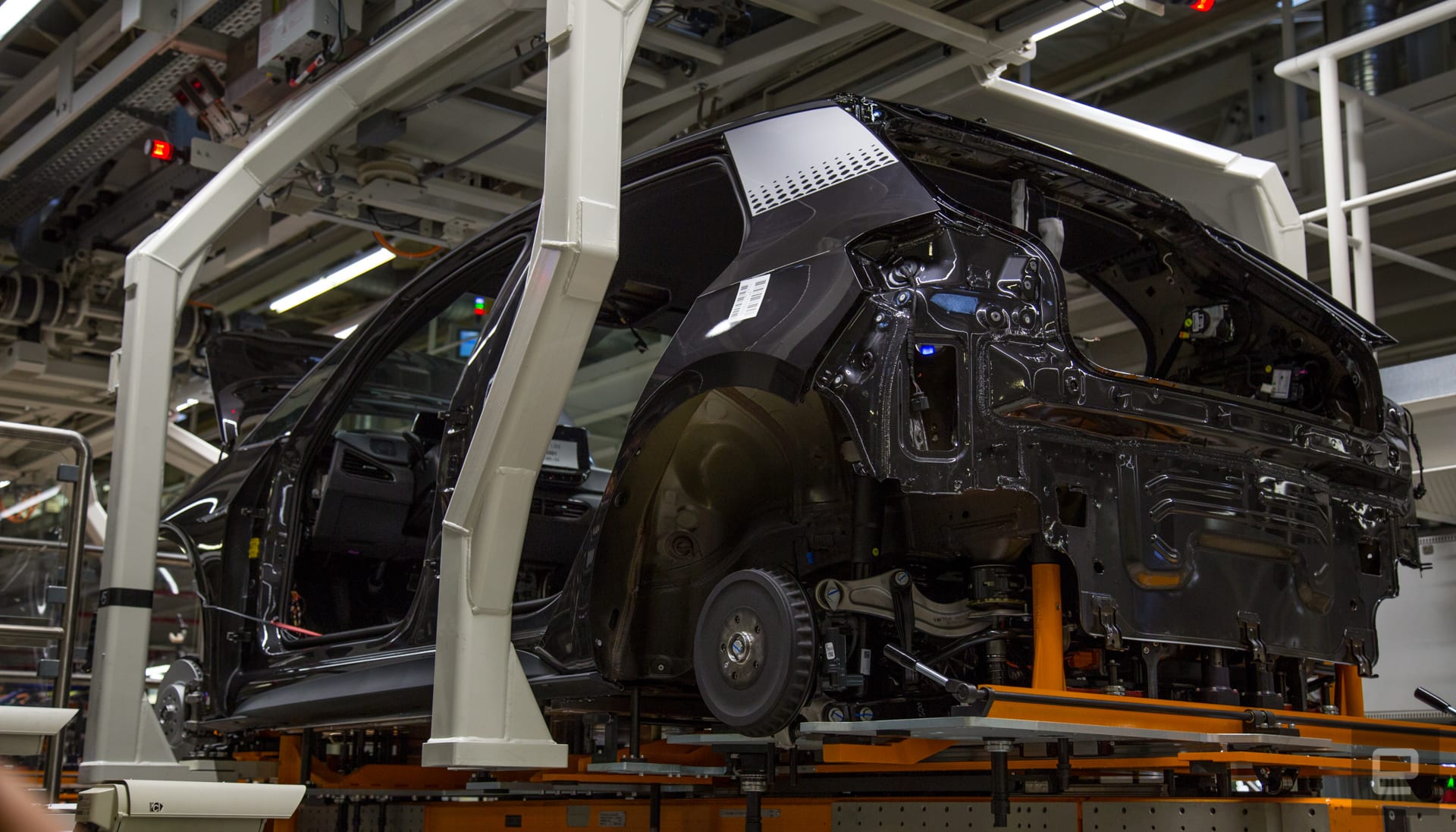 At an event this week, Volkswagen CEO Herbert Diess said that "Zwickau is steeped in German automotive tradition and as of today, it's also very much set for the future." The plant has been producing vehicles for 105 years.

At the end of the transformation, the facility will produce 330,000 electric vehicles a year (A capacity increase of 10 percent over current production) and be the largest factory of its kind in Europe.

The automaker also stated that each vehicle will be carbon neutral when it lands in the hands of customers. Volkswagen will rely on a combination of renewable energy sources for the plant, reducing the energy needed to build a car, tree planting initiatives and other schemes to make each car as ecologically friendly as possible.

Zwickau is just the beginning. Two more German factories will spin up MEB production. Elsewhere, the Chattanooga factory in the US and two factories in China will start producing EVs. In all, Volkswagen says it will invest €30 billion on electric mobility.

"We can determine the rate of innovation ourselves," Diess said. "Without the electric car, we will not win the fight against climate change" The CEO added that the company plans on building one million electric cars by 2025.

Building and selling are two different things. EVs are still a small part of the total vehicles sold worldwide. It's growing, but Volkswagen and other automakers will have to convince more than first adopters why an electric vehicle fits into their life. 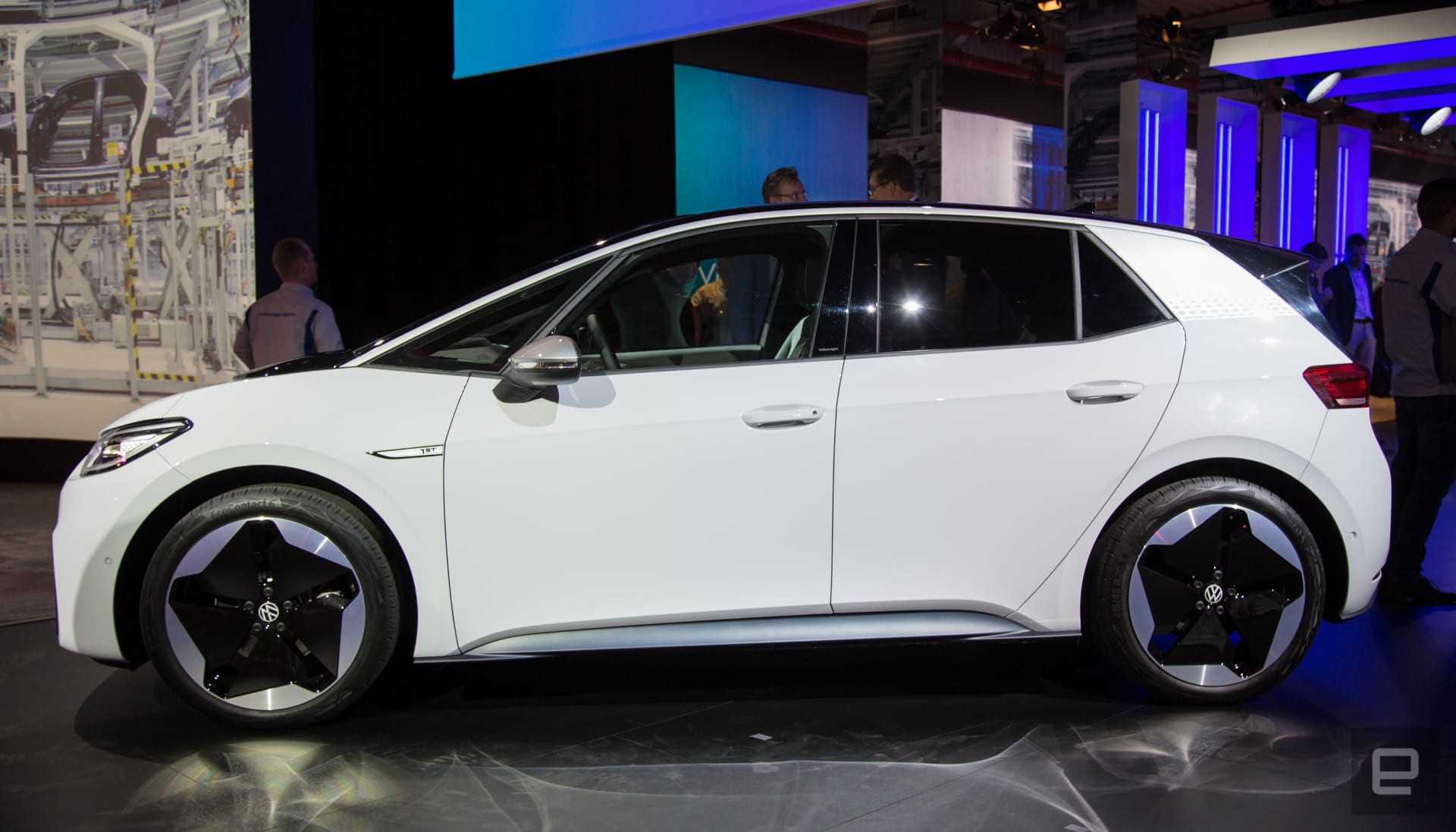 Volkswagen board member for e-mobility, Thomas Ulbrich, believes that with the ID lineup, the automaker can convince the normal customer how an EV fits into their average day. Offering three battery sizes that fit into every type of driving lifestyle and giving drivers the ability to quickly charge their cars are a huge part of that.

In the United States, that still means growing the charging infrastructure. While a majority of charging will happen at the homes of those with driveways and garages, city dwellers that street park and anyone out running errands that push the car beyond its range will need chargers. Volkswagen's Electrify America is aggressively trying to expand its reach.

Even then, some US drivers will be hard-pressed to give up the pump for a cable. While owners might not drive 200 to 300 miles in a day, the option to do so and refuel quickly is a huge barrier for EV adoption that may take years to overcome. Plus, Americans want SUVs.

Because of our desire for larger vehicles, the ID.3 will not be landing stateside (boo). Instead, we will get the ID.4 crossover that will appear at the end of 2020. Whether it makes sense or not, bigger is still better in America. But range anxiety isn't purely a US problem. Volkswagen has to convince Europeans that an EV will fit into their life.

Ulbrich said that right now the current "best range" is between 450 and 500 kilometers. But he followed up that if you ask him again in three to four years, he believes that those range numbers will decrease. "Right now they (customers) are anxious. As soon as the charging infrastructure grows, they will accept a lower range (vehicles)." He continued, "if charging is easy like fueling, why take a heavier, bigger battery inside a car that is more expensive?" 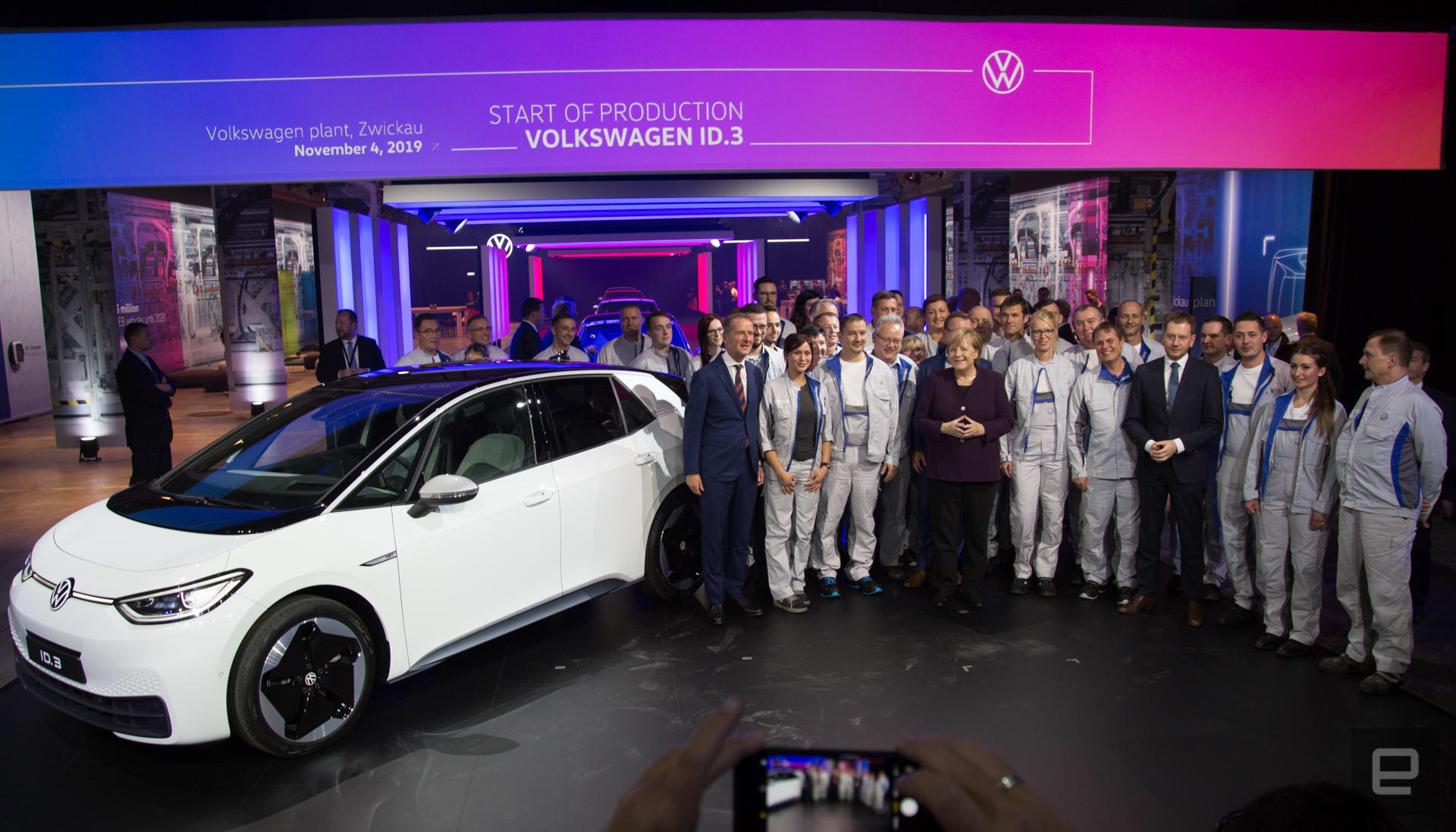 A few years ago, Volkswagen tricked the world into buying diesel engines that polluted more than their fair share. Now its CEO is on stage talking about battling climate change, promising carbon-neutral cars and factories, and saying that its future business is electric. It's a commitment that's costing billions and requires a restructuring of its manufacturing. Volkswagen is continuing its long apology, except now, it's more than words and cash settlements, it's a promise of a cleaner future delivered to your driveway.