Modern parents are faced with a bit of a tech dilemma. You want the kids to learn STEM skills, but you also don't want them spending all their time in front of screens. To combat this problem many coding tools incorporate some kind of physical element that kids have to put together or manipulate; with building toys like LEGO the marriage of physical play and computer programming makes a lot of sense.

Then there's something like Hot Wheels, which never really claimed to be educational. This year the brand upgraded its basic racing experience with Hot Wheels ID, which added NFC to the cars and Bluetooth to the track, allowing the playset to keep tabs on how fast your vehicles are going and how far they've traveled. Now the product has a new coding aspect, via Apple's Swift Playgrounds. And it sounds great in concept. But after some time spent with it, I'm not sure this is a very good use of a very expensive playset. 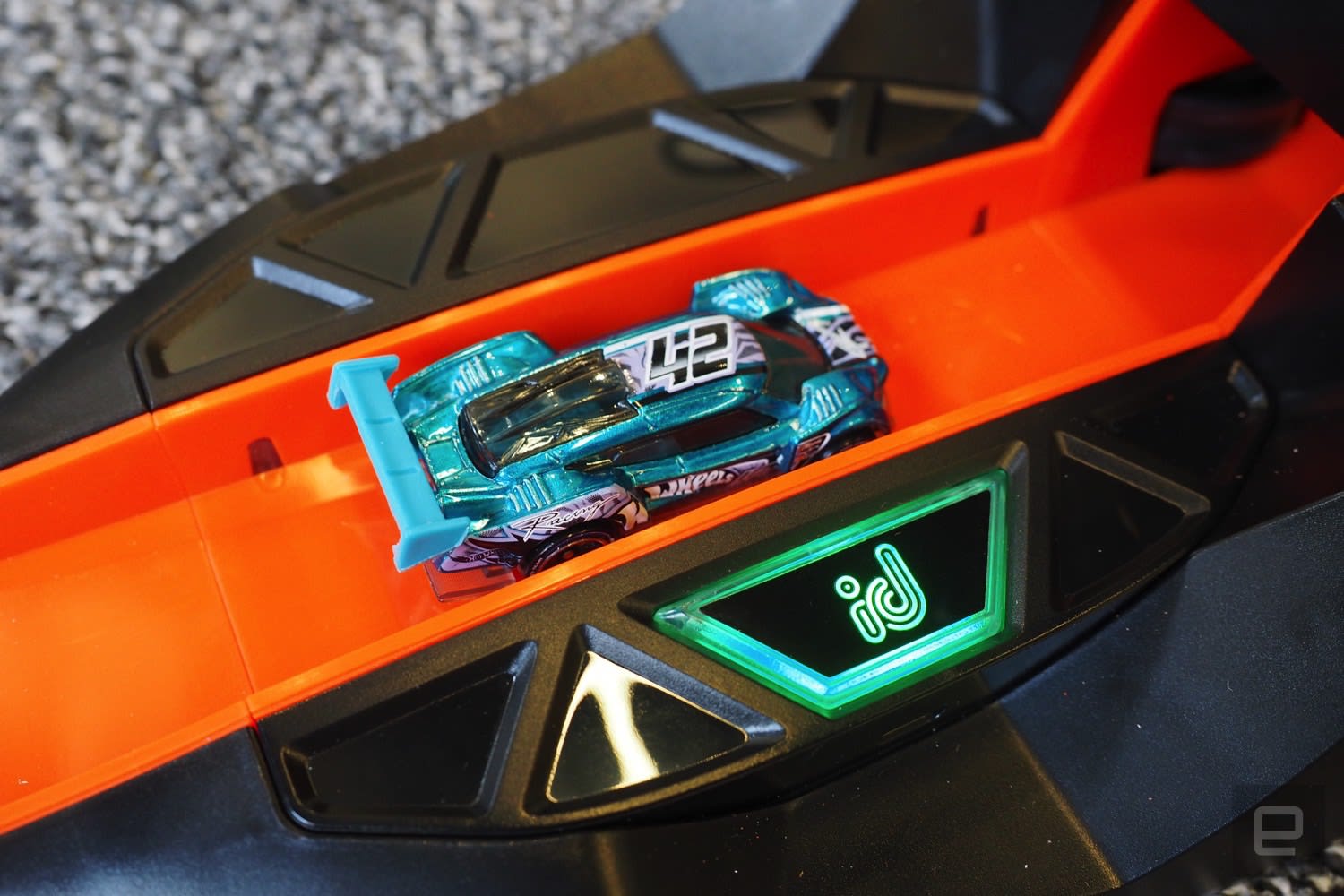 I loved Hot Wheels ID from the first moment I saw it, enough to make sure it found a place in our holiday gift guide this year. It's a product for the data-obsessed, as well as kids prone to arguing over who won. It's also still a tactile toy, with lots of physical play involved in building the track and racing the cars. For kids who prefer video games there's some racing in the app as well, though physical play is required to access the virtual races. Like LEGO's Hidden Side products (also released in 2019) it strikes a good balance between the two worlds.

The Swift Playgrounds Experience just requires the Hot Wheels Race Portal, which is the cheapest ID set you can buy at $40. The portal is a base station that can read the cars inserted into it; if you want to race in the real world you need to either attach it to your standard orange plastic track, or purchase some pieces of smart track for $140. So the standard Race Portal is a bit of a vestigial product to which the Swift Playgrounds Experience can add a bit more value. Unfortunately, creating an experience that doesn't need the Smart Track Kit means that the actual number of things you can ask kids to do is rather limited; you lose the advantage of Hot Wheels ID as a building toy. 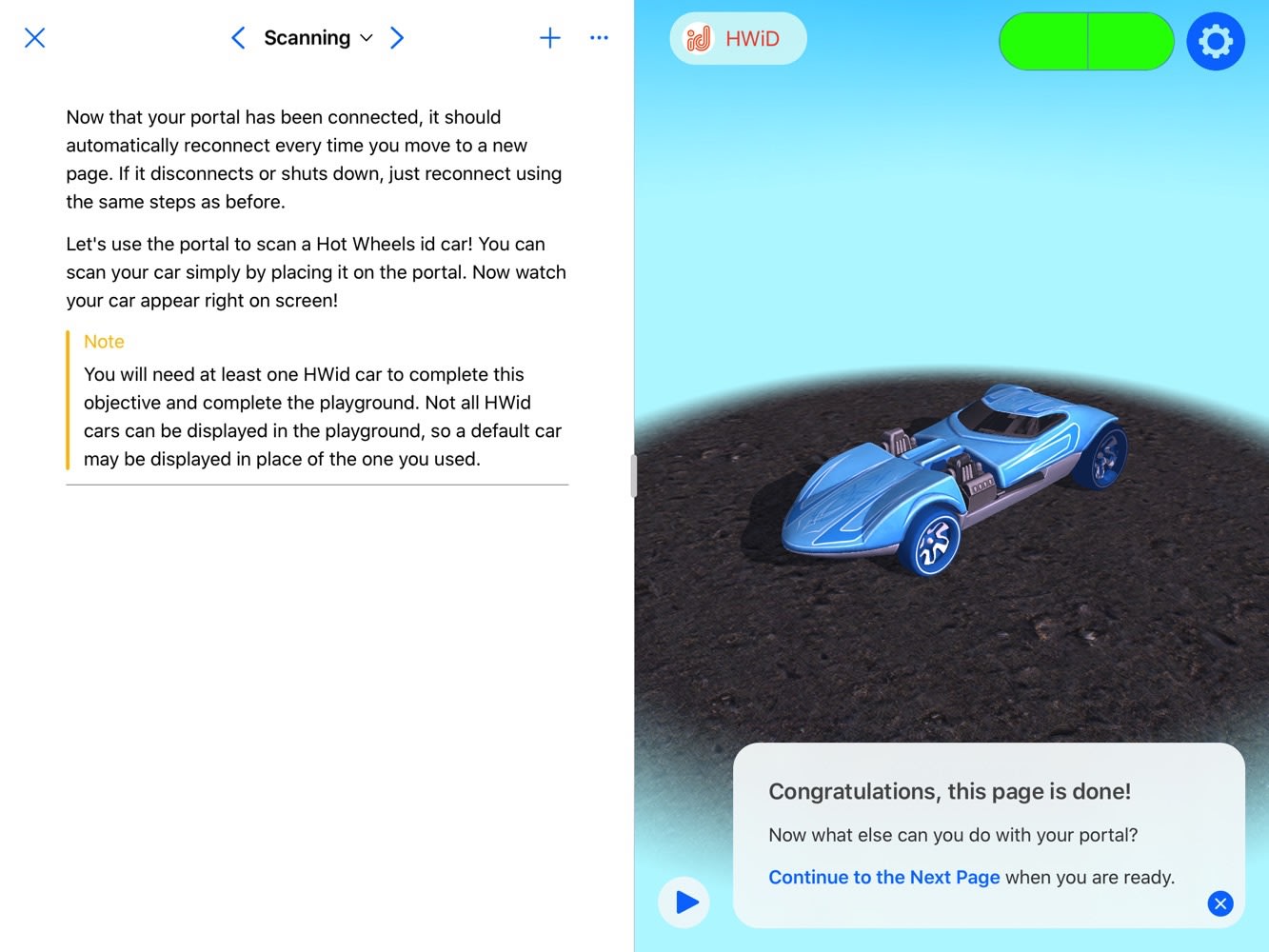 The Playgrounds Experience works like this: When you load it up, it asks you to connect your race portal and scan a car. That's all. It's simple, but for much of the program there isn't a lot of interplay between the product and the app. The experience walks you through the basics of coding, teaching you basic commands in the Swift language that you will use to make noise, move cranes, switch tracks and so on. The plus side of using Swift is that your child will be learning a real computer language, one that can be used in other places (to create their own apps, even).

The downside is blocks of text might be a little intimidating to a newcomer to coding, which a lot of Hot Wheels users are. Most systems that aim to teach the basic concepts tend to use friendlier block-style visual coding, and I wouldn't have minded that here. No one is specifically buying Hot Wheels ID to learn how to code, so it needs to be as accessible and seamless as possible. 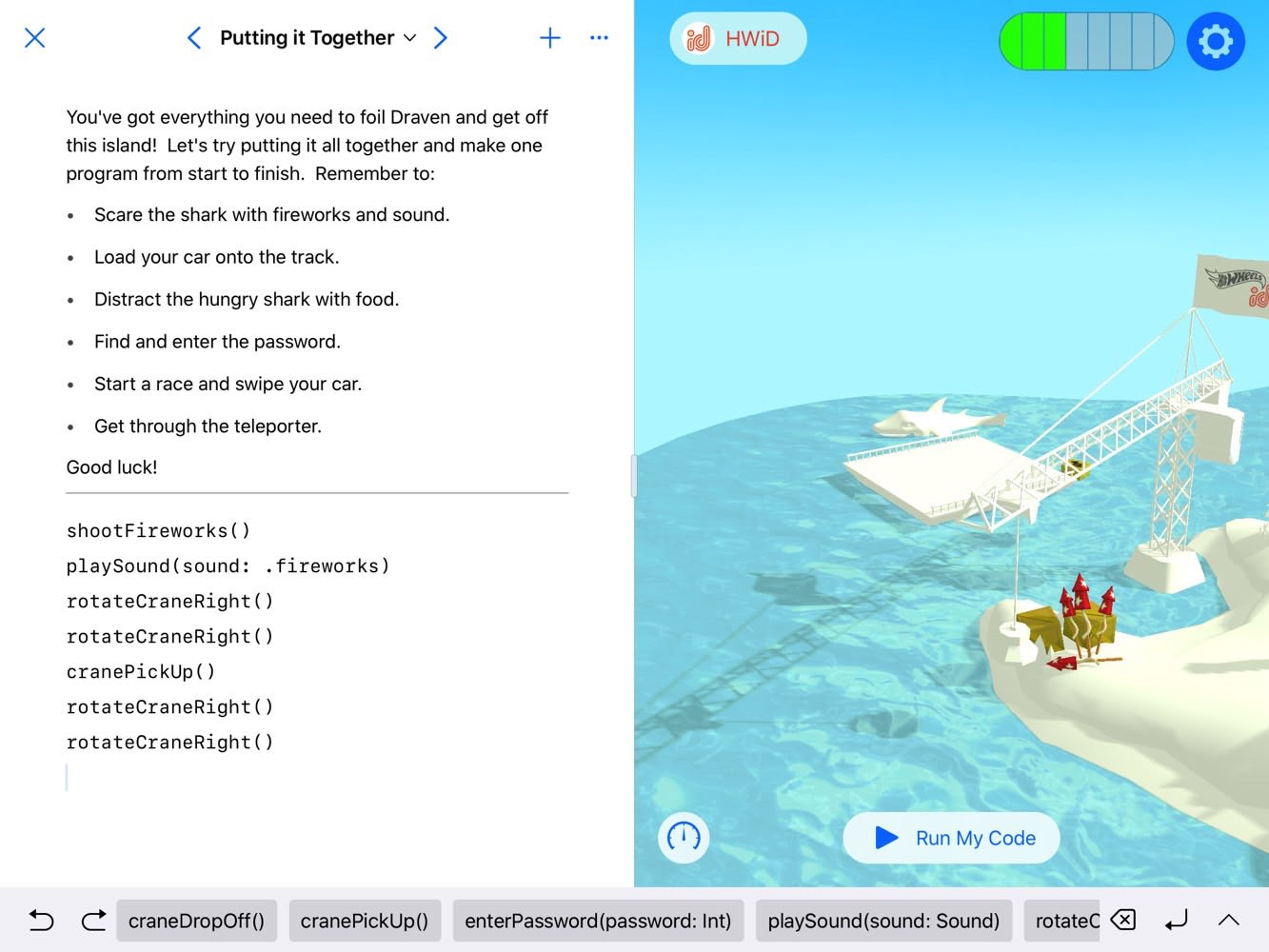 And unfortunately, it's anything but seamless. I was working with a beta build, so a few bugs were to be expected. The levels basically involve trying to get your car from one point on the board to another; either by racing on a track or moving it via a crane. You use code to do things like control the crane, switch tracks or add a booster. That's all well and good, except that if my car failed to complete the objective, like say it overshot a target, it would generate an error.

Not an "oops, you should check your code" error, but a full-blown application error. My car would then disappear from the board and would need to be rescanned, which often required taking it off and on the race portal several times. Needless to say, I hope this issue has been fixed in the final release. (Editor's note: Hot Wheels contacted me and said that these problems had been resolved, but the build I downloaded Sunday night still generated the same error.) 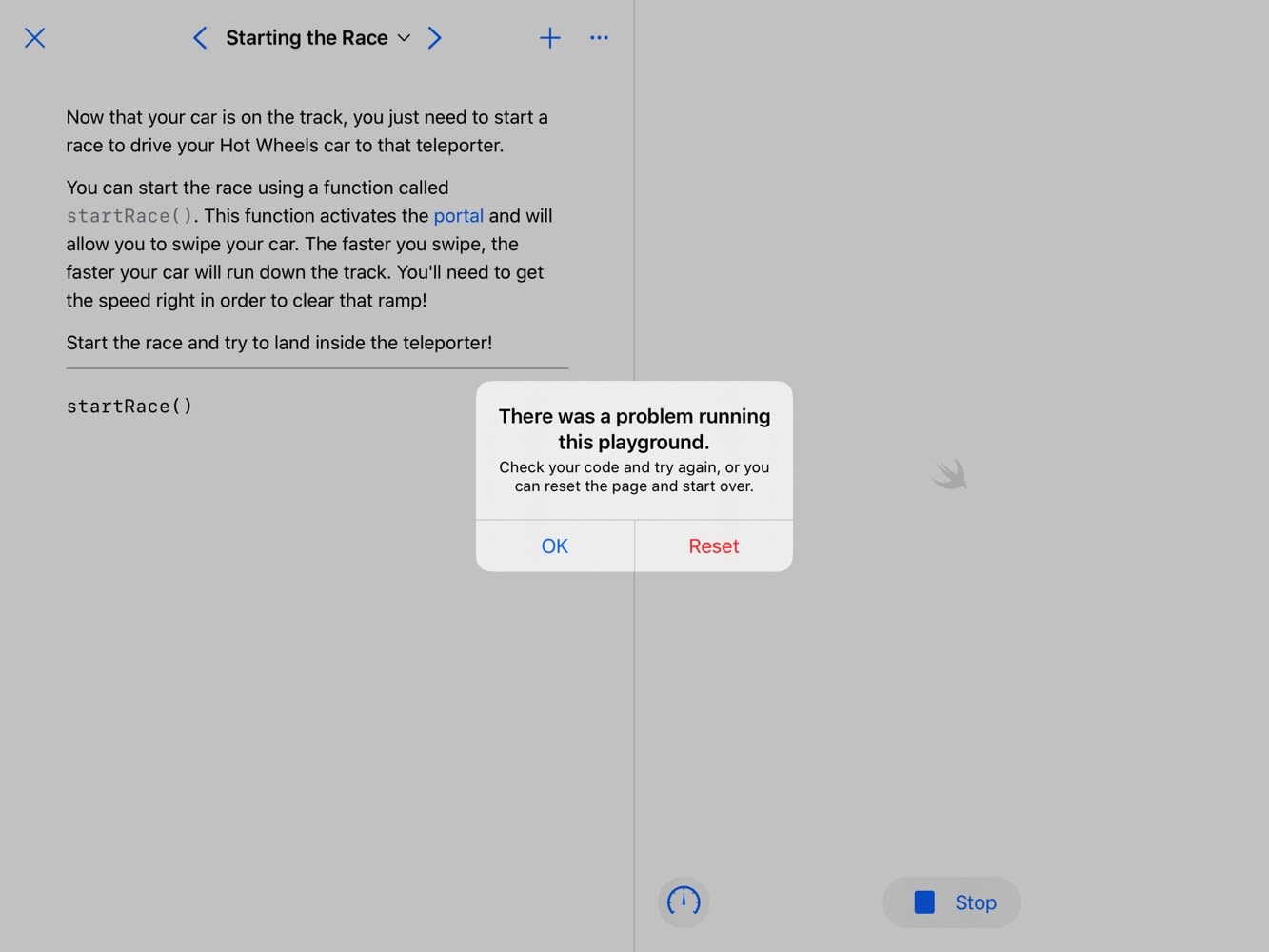 However, my biggest frustration wasn't a beta problem but rather, with a key feature of each coding tutorial's design. After the car has been scanned in, you still need to keep the race portal handy because some boards will ask you to "race" down a track, which means that on the signal (a stoplight that goes from red to green) you'll need to swipe your toy car on the portal. And it's not just any swipe: It needs to be the right timing and speed, otherwise your car will either go nowhere or overshoot the target.

One board asked me to launch my car at a ramp so it could hit a "teleport" spot. But I had to be sure not to swipe my car too hard, otherwise it overshot the target and landed in the water, generating an error (and then you have to rescan the car). It took dozens of tries to hit that sweet spot, making sure to rescan the car before every try (which in itself required a few tries each time).

So yeah, I was feeling a tad irritated with the whole experience. 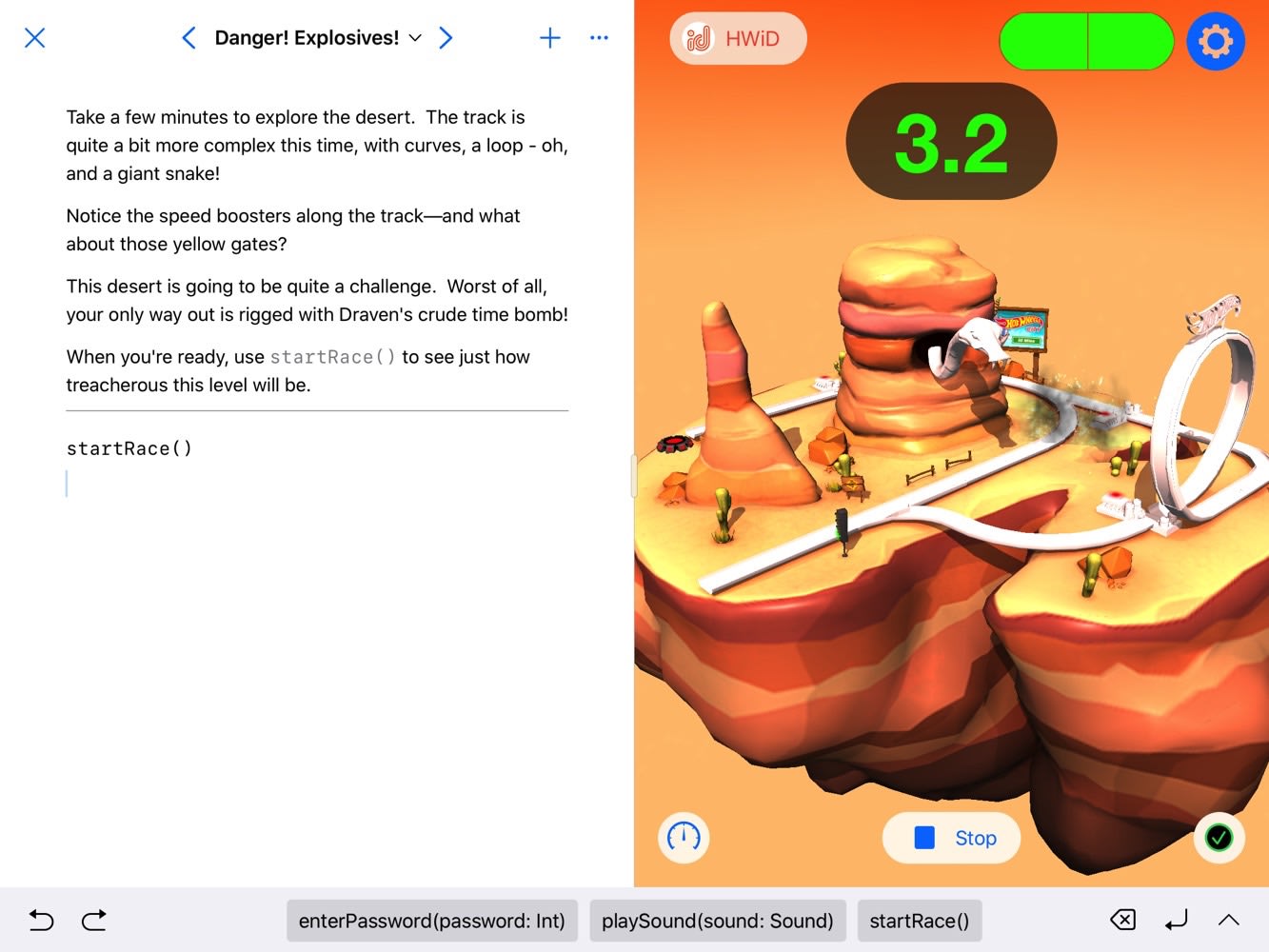 I've taken coding classes in high school and college, and I'm accustomed to failure because I mistyped a bit of code or missed some vital step. And the Hot Wheels Swift Playgrounds Experience does take those kind of errors into account! If you screw up the code, it will highlight the typos in red so you can fix them. It also displays the commands you're supposed to be using on the bottom so you don't even have to key anything in, just click on them in the right order and hit "run code."

But having your program fail because you didn't swipe a toy car at the right speed? It turns coding into a physical skill, and doesn't even give you proper feedback on how well you're doing it. Was I too fast? Too slow? Maybe the reader didn't pick up the car properly (which also happens). Or the car disappeared again and needs to be rescanned. The act of learning how to code involves learning how to debug as well, and the whole race portal thing just adds another layer of troubleshooting on top of that.

As I said, anything that teaches beginning coding needs to be seamless. Frictionless. It needs to get people addicted first, then throw curveballs at them. Oh, and when I finally got the code right, swiped the car on the race portal right... a buggy shark ate my vehicle anyway. (And yes, it generated an error.) It took a lot of patience not to just chuck the car at the wall instead. Hopefully they'll work out the kinks but for now, just stick with the regular Hot Wheels ID app, because it's already great and doesn't need an "educational" gimmick that will just piss your kid off.

Update (6:10pm): Hot Wheels says that the error is the actual message that users will see, as it is standard for errors in Swift Playground code. Also, we originally neglected to state there is an $140 upgrade kit for the Race Portal.