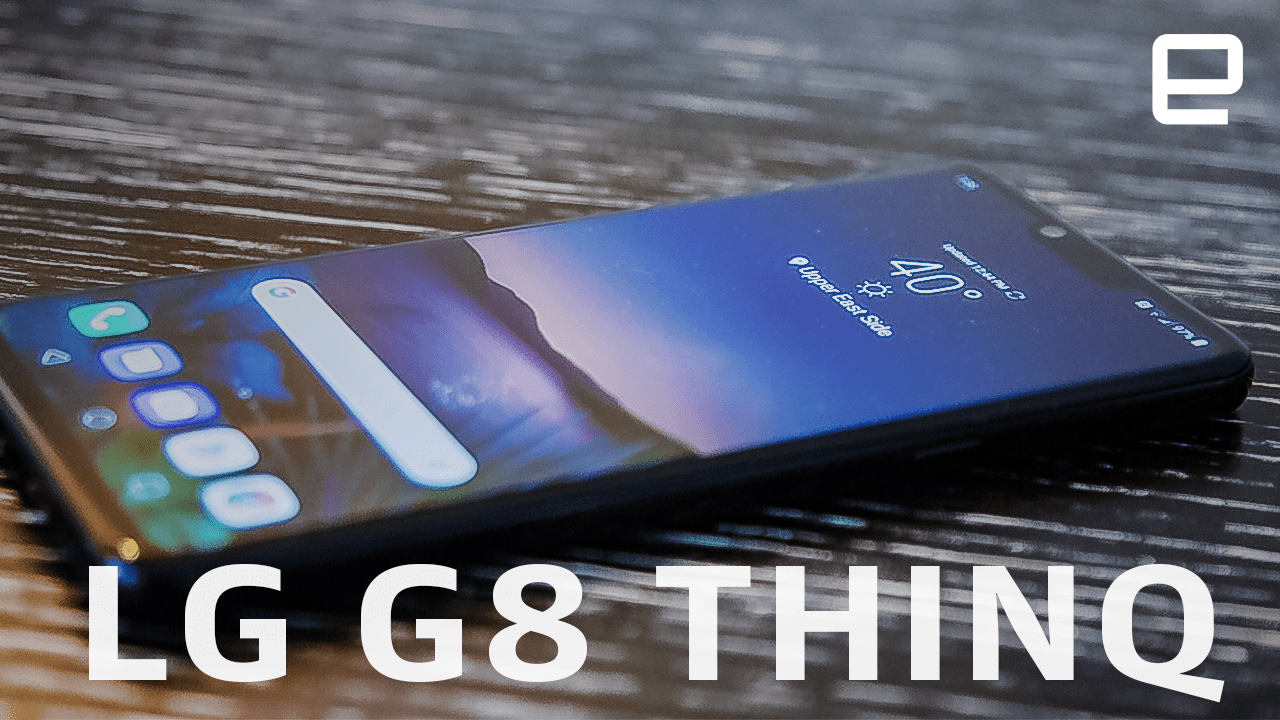 Once upon a time, a few years ago, LG came to Mobile World Congress to show off one of the most ambitious smartphones I had ever seen. That device was the modular G5, and it was an utter flop. Since then, the company has dutifully worked on its solid flagship phones, but it seemed to have lost its affection for potentially great — if polarizing — ideas.

That's not true anymore, though. With its new G8 ThinQ, the company is starting to embrace its weirder tendencies once again. Whether or not people will actually appreciate some of these new features is still up in the air, but one thing is clear: we're not talking about business as usual at LG. With all that said, though, LG has done a really good job obscuring just how odd the G8 can be. That's thanks almost entirely to the phone's conservative design — it keeps the same clean lines we got with last year's G7 but smoothed out that older phone's edges a little bit. LG's push for a sleeker design is most apparent when you flip the G8 over. Unlike some of its recent smartphones, LG went with a slightly more traditional dual-camera setup for this US variant (more on that later), and they sit flush with the G8's back. It's a minor touch, to be sure, but it does go a long way in helping the phone feel more polished.

The stuff inside the phone is just what you'd expect, too: Like every other premium smartphone we've seen at MWC, the G8 uses one of Qualcomm's Snapdragon 855 chipsets, paired with 6GB of RAM and 128 GB of internal storage. Also of note: there's a 3,500mAh battery in there, which is a little concerning. I've heard of some people having trouble getting the V40's 3,300mAh battery to stick it out a whole day last year, and because the cell is a bit bigger, I'm looking forward to seeing how long the G8 can last.

Things start to get more interesting once you start paying attention to the 6.1-inch, 19.5:9 FullVision OLED display. Let's start with the fact that it doubles as the phone's main earpiece — there's no traditional speaker here. That approach might not sound like the best idea, but it actually worked really well: Calls came through very loud and clear, to the point where I was concerned people around me could hear what my friend was talking to me about. I didn't expect I'd be ready to kiss the earpiece goodbye when I picked up the G8 for the first time, but here we are.

There's a notch cut into the top of the phone's screen, too, and I know; normally that wouldn't be much to write home about. When you consider that the company's rivals have come to embrace eye-catching hole-punch displays for 2019, though, LG's decision to stick with the more "traditional" notch feels a little behind the curve. As it happens, though, LG made full use of that cut-out. Next to the 8-megapixel front-facing camera is a time-of-flight sensor LG calls the Z Camera, and it's really what makes the G8 as kooky as it is.

Long story short, the Z Camera detects objects in front of it by firing a beam of infrared light and measuring how long it takes for that light to bounce back. It helps for fairly mundane things like isolating your head from the background when taking portrait selfies, but LG took things a step further -- now, you can unlock the G8 by holding your palm in front of that Z Camera, and even control it with mid-air hand gestures.

The former, technically known as Hand ID, is easily the more bizarre of the two. When you hold your hand above the Z Camera to register your palm, the phone actually identifies you based on the tell-tale pattern of veins in your hand. Pretty macabre, no? It's too bad, though, that Hand ID is actually a huge pain to use correctly. The problem is, it's nearly impossible to get your hand lined up just right on the first try — too often, it's a process of holding your palm above the phone, being told to move your hand closer, doing that, and going through the whole thing all over again. It's possible that people will actually get better with this in time, but frankly, trying to use Hand ID left me so frustrated that I'd rather just pick up the phone every time.

Those AirMotion gestures are, thankfully, a little easier to live with. Here's how they work: To get the phone's attention, you have to make a sort of claw with your hand in front of the camera. (I'm dead serious.) From there, you can activate app shortcuts you've previously set up, play and pause your media, and even dismiss incoming calls with a swipe. To be clear, the camera can be finicky about actually seeing the claw-hand trigger correctly, and certain gestures — like turning your hand to control the phone's volume — are more gimmicky than practical. Even so, these gesture controls actually work, and have come in surprisingly handy even during my limited hands-on time.

And then there's the camera. As I mentioned, there are only two of them around back: a 16-megapixel wide camera with a 107-degree field of view, and a 12-megapixel camera that can see a more standard 78-degree span. In my limited time with the G8, these cameras seemed perfectly nice — LG's cameras aren't typically known for capturing the punchiest, most effective images, but colors came through with a lot of verve and there was plenty of detail to be found. That said, losing one of the three cameras I got used to on the V40 feels like a distinct step backward, and I don't really get LG's rationale here. What's more bizarre is that the G8 actually comes with three rear cameras in other regions. Like I said: the G8 is weird. 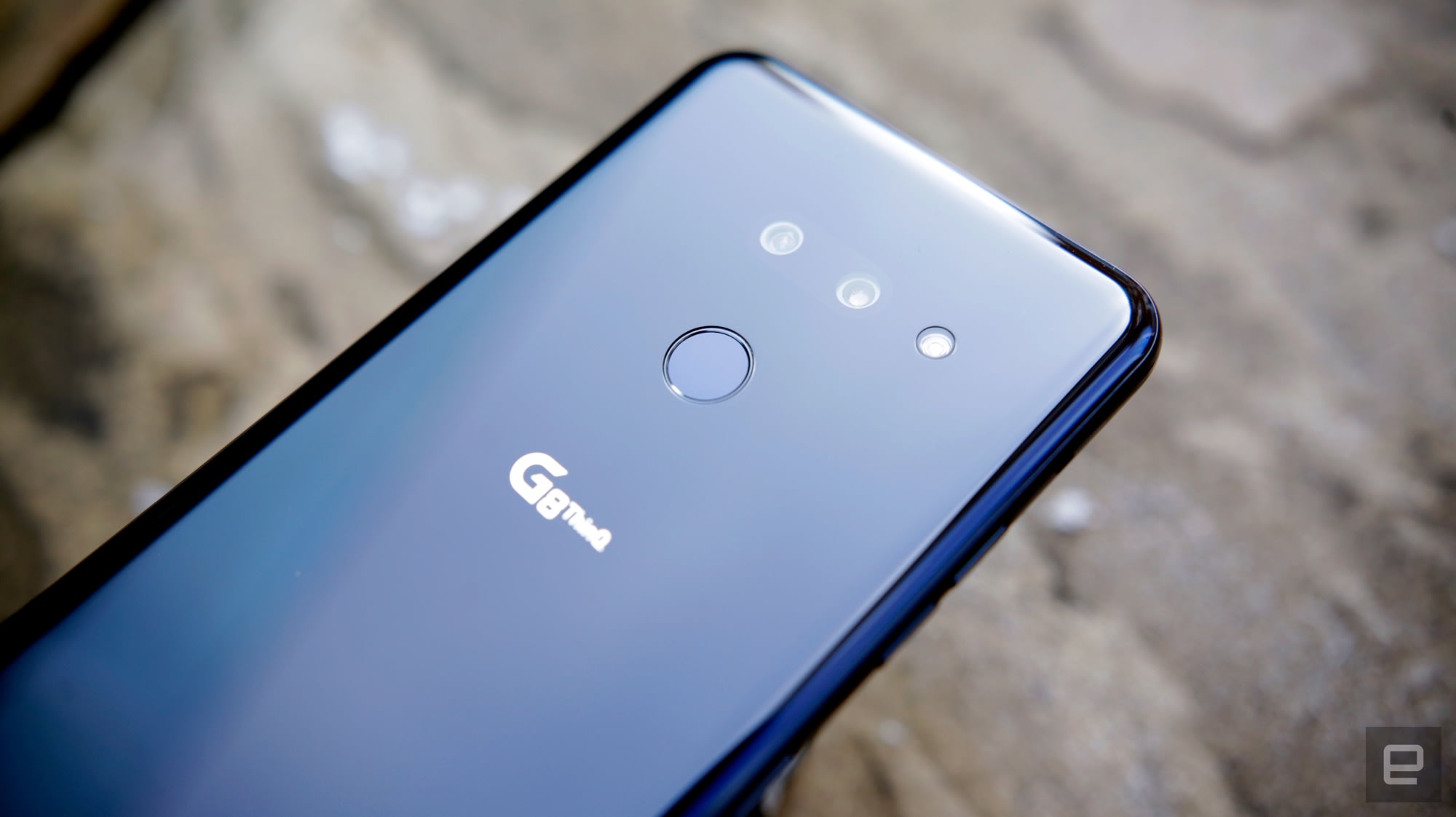 So far, though, it seems like LG has gotten one thing right that Samsung struggles within the S10: fixing barrel distortion in wide-angle photos. Quite a few of the sample shots we've taken with Samsung's new flagship have notable distortion around the edges — as much as I love the quality of those ultrawide images, they the pronounced curvature of objects that should appear straight is really grating. I can't say for certain that the issue doesn't exist at all on the G8, but at the very least, it's much less noticeable. That's at least partially because the G8's wide camera has a slightly narrower field of view, but LG also says there's some AI helping here too.

All told, I'm very glad to see LG let its freak flag fly a little again. We're now in an era of smartphone history where 5G and new screens and foldable designs are dominating the conversation, and LG's work here is a clear sign that the company doesn't mind striking off in its own direction. Of course, whether any companies — or any customers for that matter — follow LG down that path remains to be seen.

Update 4/4/19 8:11AM ET: This article has been updated to reflect the fact that outside of the US, the LG G8 ThinQ comes with three rear cameras instead of two.

In this article: g8 thinq, gear, hands-on, lg, lg g8, lg g8 thinq, mobile, mwc2019
All products recommended by Engadget are selected by our editorial team, independent of our parent company. Some of our stories include affiliate links. If you buy something through one of these links, we may earn an affiliate commission.