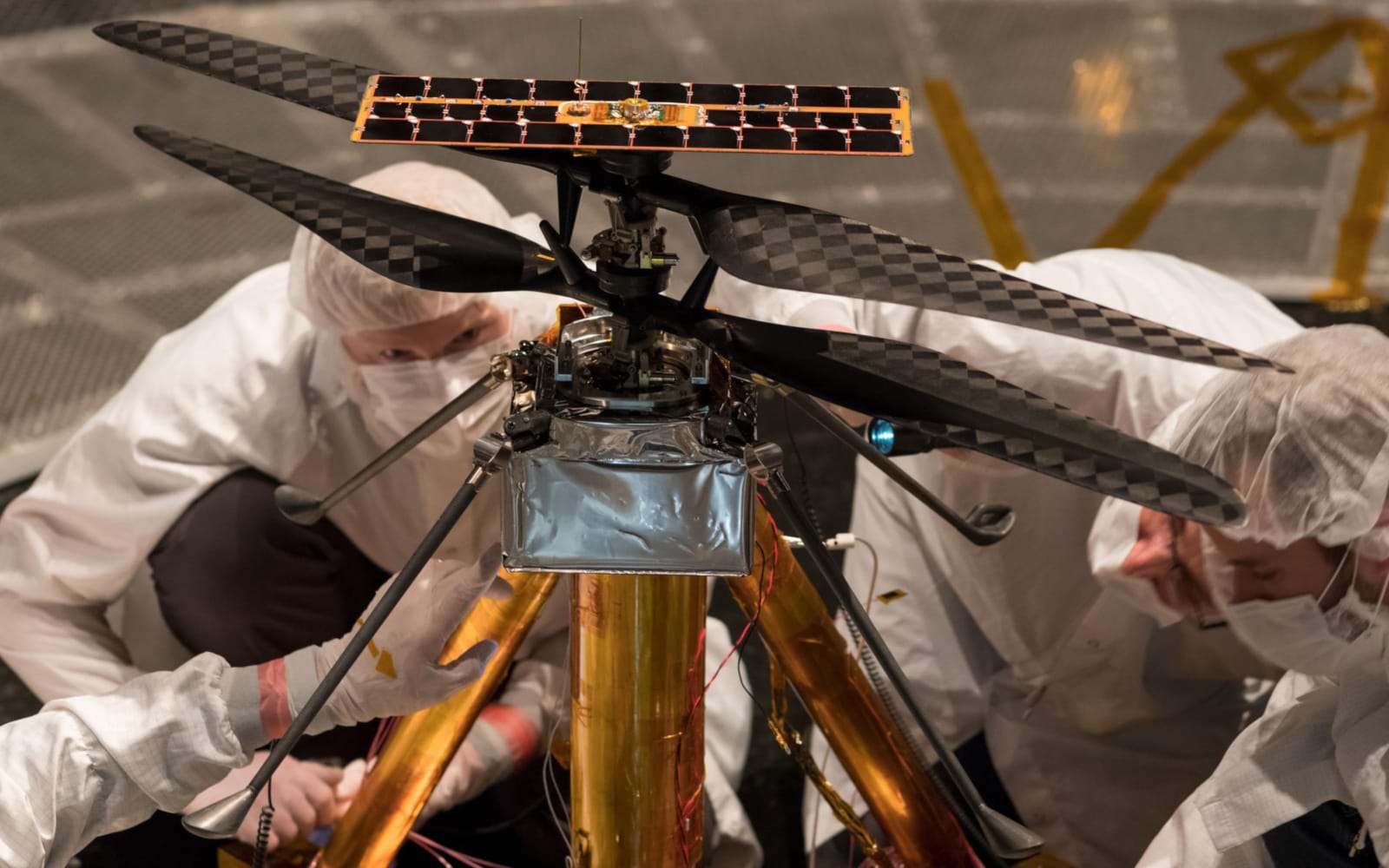 The scientists working on NASA's Mars helicopter project are done building the actual 4-pound vehicle that's blasting off to the red planet with the Mars 2020 rover. But they can't just strap the helicopter to its bigger companion's belly and call it a day -- they first have to prove that it can actually fly in Martian conditions. That's why in late January, the team replicated our neighboring planet's much thinner atmosphere in JPL's Space Simulator in order to make sure the helicopter will be able to take off. Spoiler alert: they were able to successfully conduct two test flights in Martian conditions on separate days.

Since the Martian atmosphere only has about one percent the density of Earth's, the researchers would've had to conduct their flight tests at an altitude of 100,000 feet if they did't rely on the simulator. The 25-foot-wide vacuum cylinder was the much better choice, especially since the agency has been using it to test machines meant for the red planet anyway. In fact, it's where the Curiosity team tested the rover here on Earth.

To be able to replicate the Martian atmosphere, the team injected carbon dioxide into the chamber after sucking out all nitrogen, oxygen and other gases. They also had to use a gravity offload system in the form of a motorized lanyard that tugged at the helicopter as it hovered above the ground, since Mars only two-thirds of our planet's gravity.

While the unmanned aerial vehicle (UAV) only logged a total of one minute of flight time at an altitude of 2 inches above the ground, the scientists were able to get the data they need to be able to say that it will work on Mars. "The next time we fly, we fly on Mars," project manager MiMi Aung said. "Watching our helicopter go through its paces in the chamber, I couldn't help but think about the historic vehicles that have been in there in the past. The chamber hosted missions from the Ranger Moon probes to the Voyagers to Cassini, and every Mars rover ever flown. To see our helicopter in there reminded me we are on our way to making a little chunk of space history as well."

Both the Mars 2020 rover and the helicopter are expected to arrive on the red planet in February 2021. The helicopter will serve as a demo for future space UAVs, while the rover will study the planet's geology, assess the possibility of life in the past and collect samples by drilling into its surface.

Source: NASA
In this article: gear, helicopter, jpl, mars, mars 2020, nasa, space, tomorrow
All products recommended by Engadget are selected by our editorial team, independent of our parent company. Some of our stories include affiliate links. If you buy something through one of these links, we may earn an affiliate commission.