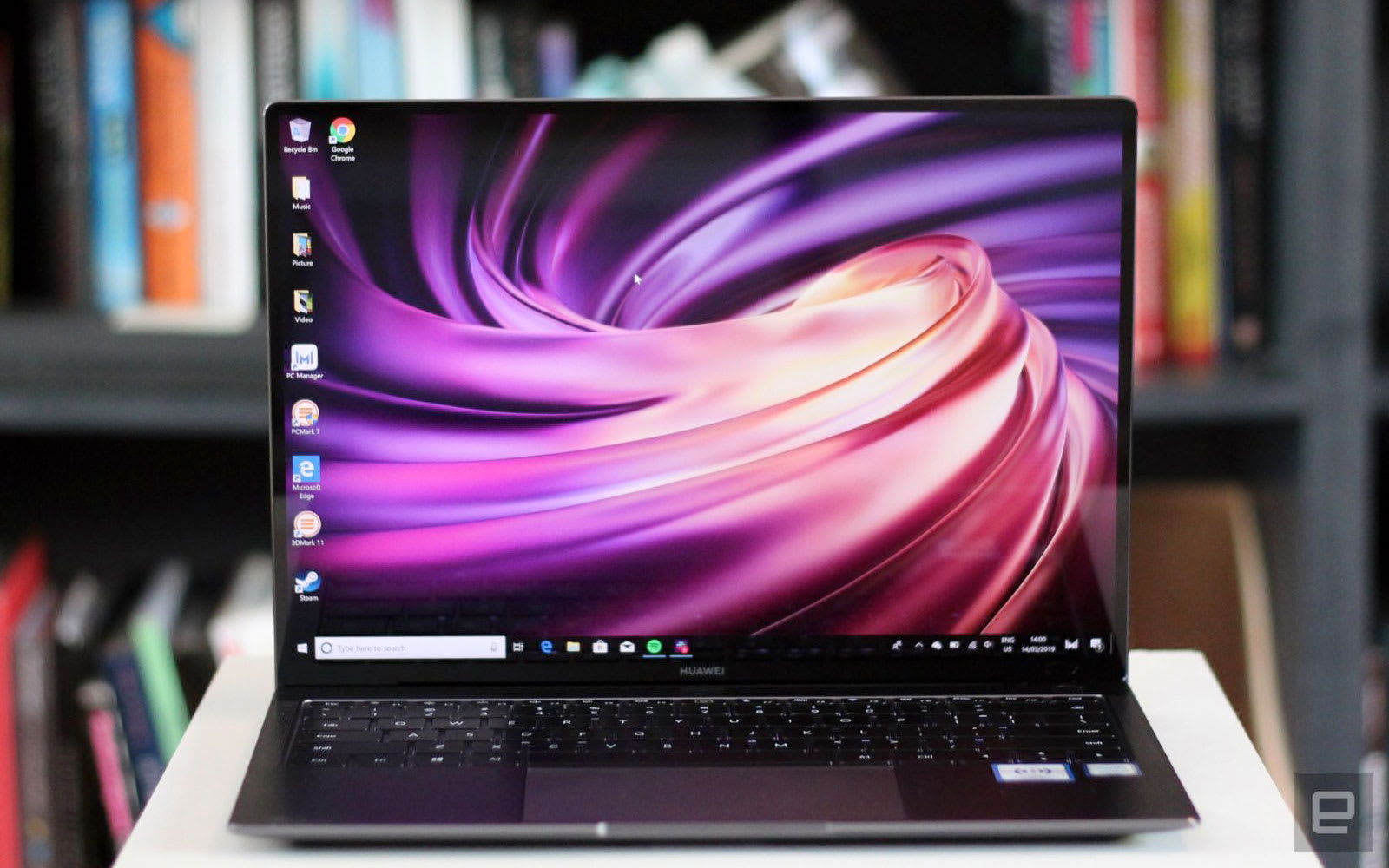 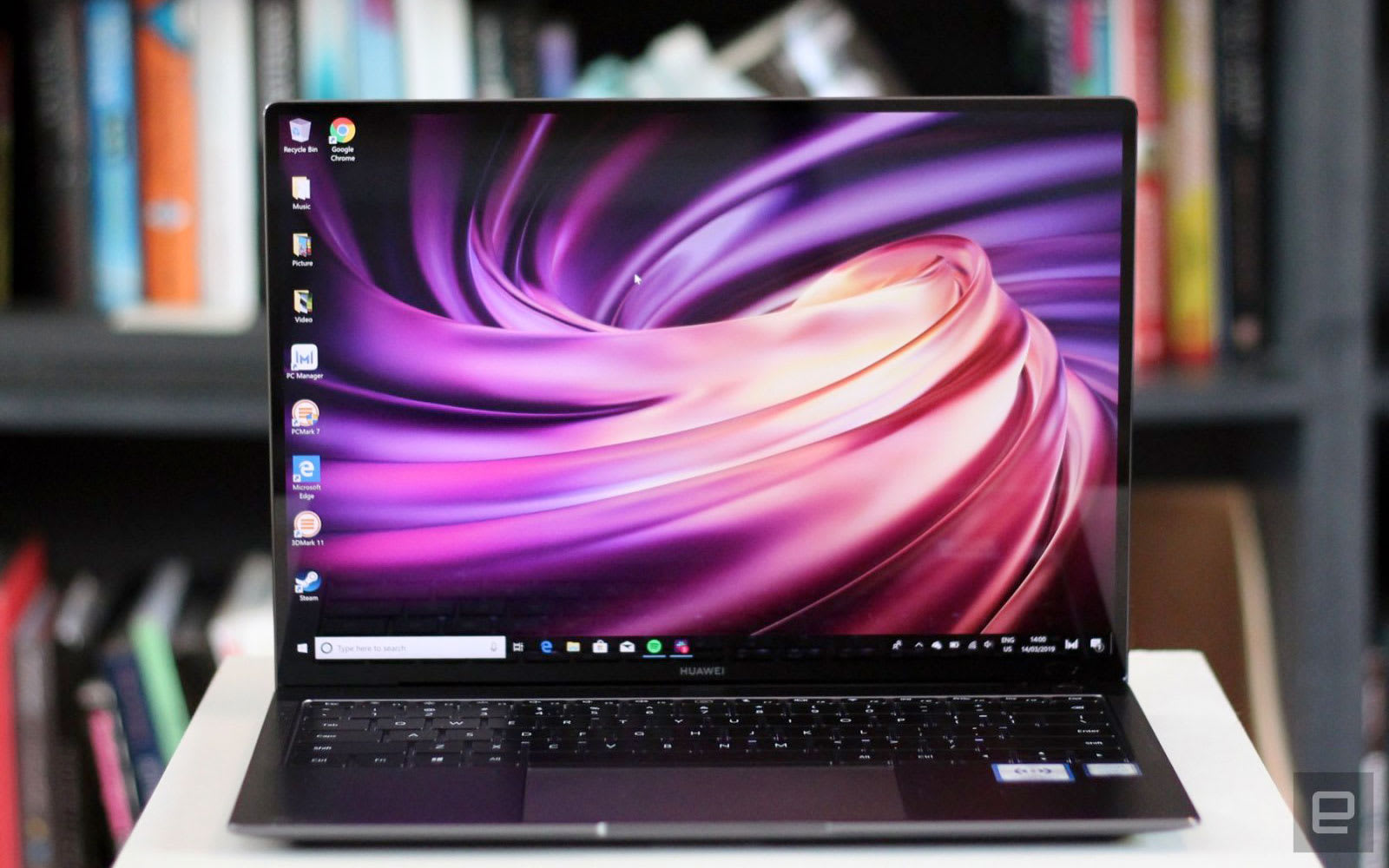 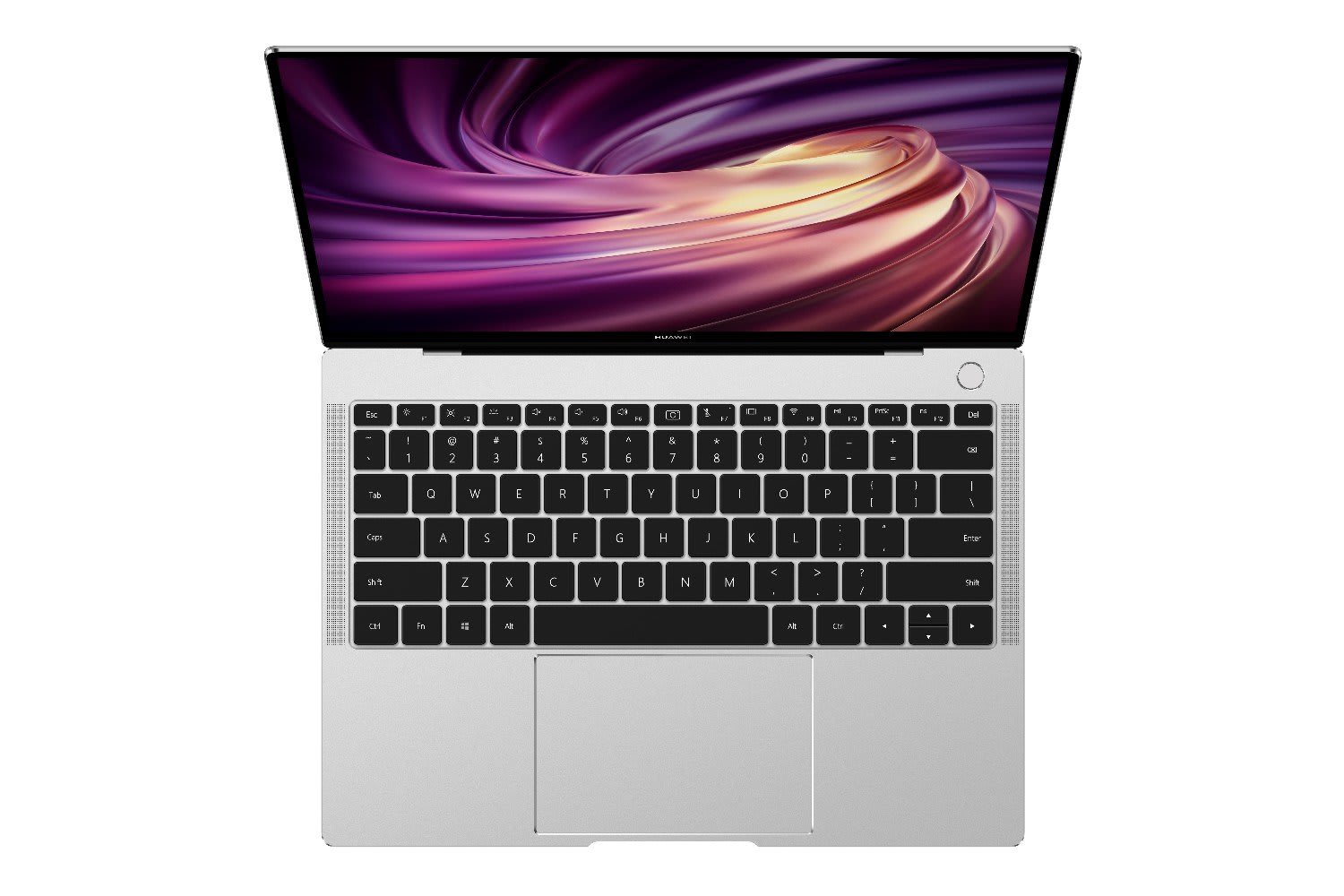 For a company with relatively little experience making laptops, Huawei's MateBook X Pro was a revelation. The machine was one of the best you could buy, with a blend of style and performance that made it the equal of a brand-name incumbent. Now, the company has to deal with the raised expectations that come when your last device was regarded as class leading.

It's the sort of problem that could lead some design teams to second-guess themselves as they wonder what made the first one such a hit. Do you stick with what works or try to push the envelope in the hope of reaching even greater heights? Huawei's wisely chosen not to reinvent the wheel, here, but that conservatism means there's really not much to distinguish this from its predecessor. Huawei has delivered the tiniest of incremental updates to its winning MateBook X Pro ultraportable. Offering a blend of good looks and power, it’s expensive, but offers enough grunt for professionals who need an ultraportable. The annual upgrades are a little lackluster, however.

Be the first to review the MateBook X Pro (2019)?
Your ratings help us make the buyer’s guide better for everyone.
Write a review

The 2019 X Pro measures, and looks the same as the 2018 model in almost every way. The only differences are cosmetic, as the old Huawei flower logo and in favor of an austere, all-caps branding. The big, HUAWEI logo on the lid will mark it out in a sea of HP, and ASUS logos, but it humanity.

Otherwise, it's the same MacBook Pro-inspired/rip-off design, with the same selection of ports as last year's model. Down the left, you'll find two USB-C ports, one of which supports Thunderbolt 3, although this year at full bandwidth, and a 3.5mm audio jack. On the right, a sole USB-A port remains for the throwbacks among us who've yet to embrace the dongle life.

At 2.9 pounds, same as last year, it's hardly the heaviest machine in the world, and you'll not notice it in your bag at all. There's a similar sense of strength as in the previous model, too, and you expect it'll tolerate a fair amount of rough and tumble. Huawei wisely opted not to mess with the keyboard, the generous or the fingerprint sensor on the power button.

One change Huawei made to the X Pro was File Sharing (via Huawei Share). Essentially, an NFC panel to the right of the lets you share stuff with your compatible Huawei phone. The list of features includes easy tethering of your phone's cellular connection, moving and even copying items from your phone (or ) clipboard back-and-forth.

Setting up to connect to my P20 Pro was than advertised, but it worked well after that. Taking a picture of a letter with the phone, tapping it on the laptop and getting an version seconds later was cool. Personally, I wish this feature was universal, if only for when I to get app screenshots on to the PC for a review. Clipboard sharing for getting complex URLs on and off the phone is another speedy trick.

Unfortunately, the feature is only available for users with the new X Pro and a handful of Huawei and Honor phones. those with NFC and are running EMUI 9.1 / Magic 2.1, a list that includes the Mate 20, P20, P20 Pro, Mate 20 X and the Mate 20 RS. Given how few Huawei devices are available in the US, it's unlikely many will take advantage of the option.

It's worth bearing in mind that Huawei's brand has taken a battering as it's being hounded out of the telecoms industry by the US government. The company stands accused of conducting elaborate schemes to steal trade secrets from rival technology firms. And it fairly adopts the trade dress of rival products, like the MacBook and MacBook Pro. So it's up to you to decide if you want to buy a laptop from a company that's got something of a bad rep. 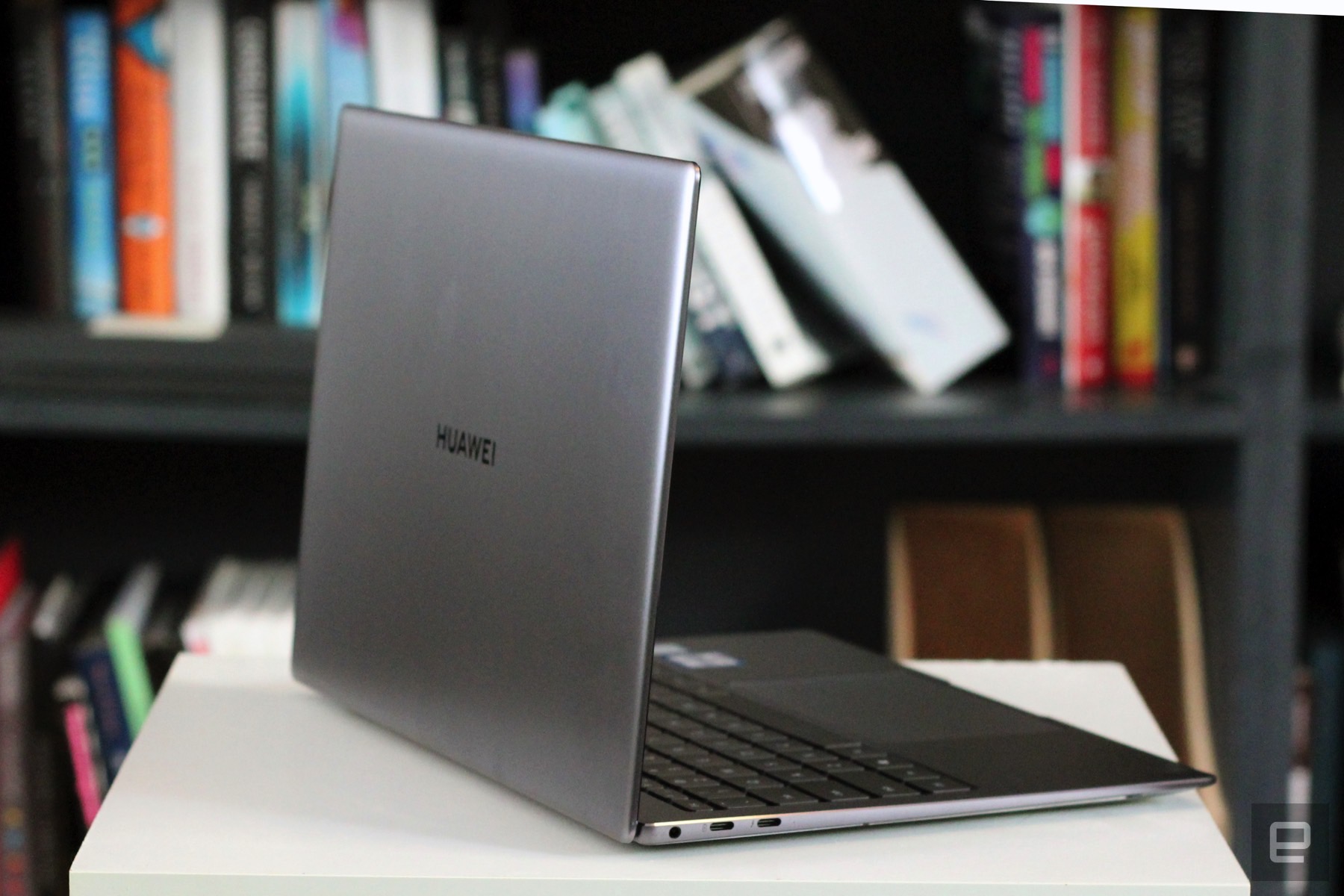 If there's a theme with the 2019 X Pro, it's that Huawei spent no time fixing what . I could paste in the paragraphs about the display and sound from my 2018 review and pass them off as fresh insight. You get the same 13.9-inch, 3K LTPS touchscreen with a 3:2 aspect ratio, 178-degree viewing angle and 450 nit as before.

It's still great for watching movies on but lackluster in bright sunlight. The glossy display has a horrible knack of picking up smears, so I wouldn't suggest using the touchscreen too often. Or, if you must, make sure you've got a lint-free cloth lying around to make sure it's readable afterward.

I made this point last year, but I'm always frustrated by the agreed-upon lies we to talk about display measurements. A 40-inch TV is only 40 inches corner-to-corner, which isn't a reflection of its actual width. The 11.96-inches wide X Pro is a "13-inch" laptop, and Huawei crammed almost 14 inches of display into that frame. 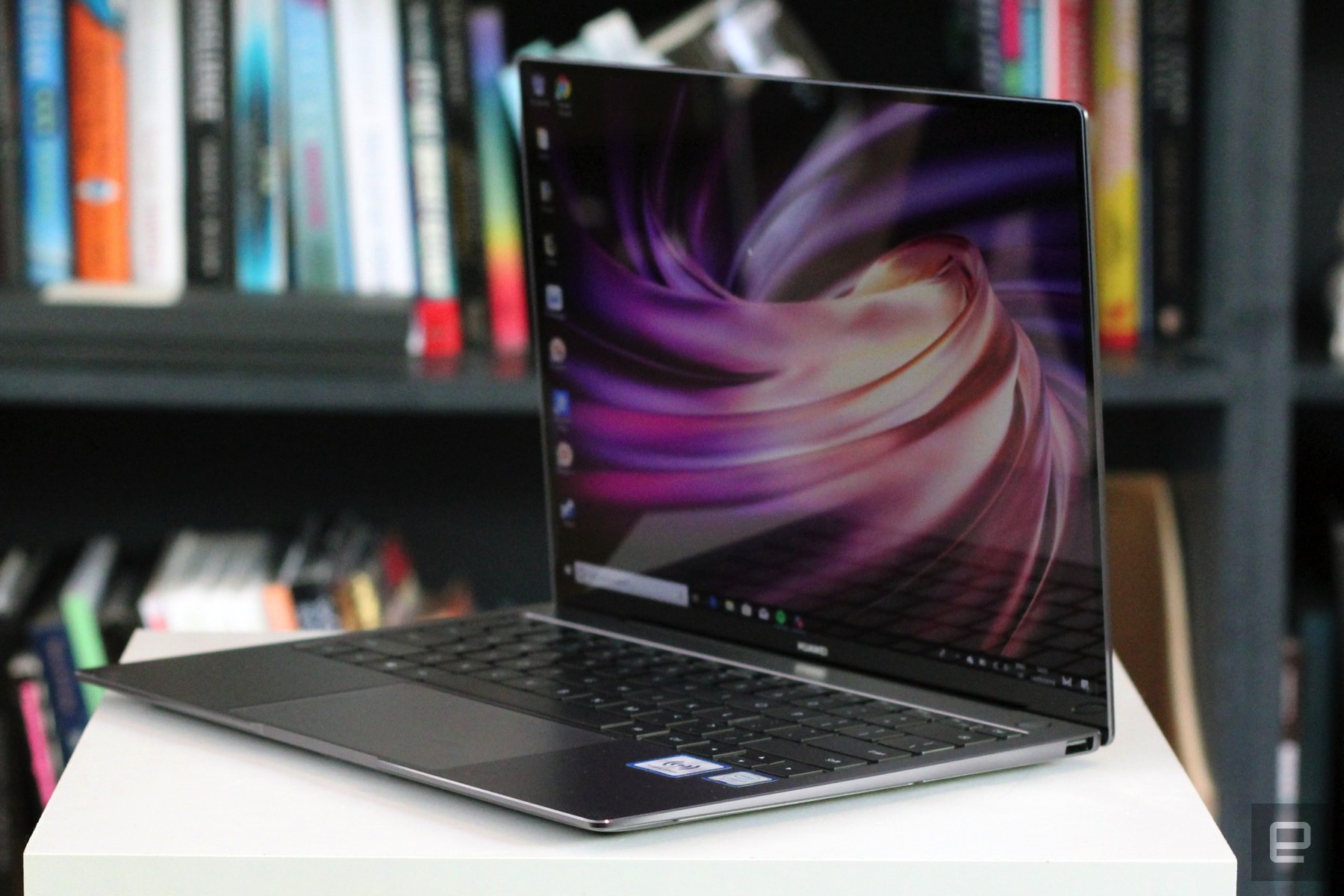 Like last year, the X Pro has Dolby 2.0 sound and comes with a Dolby-branded audio manager. And, just like last year, it all sounds great at low volumes, not tinny like plenty of laptop speakers we could mention. Unfortunately, under big bass, and at high volumes, you'll still get that horrible rattle, ruining the effect.

Mass-market laptops are not the place to introduce complex, fault-prone input methods. Huawei has stuck with the same keyboard it, and every other sane laptop maker, uses in their machines. It is as brilliant as the previous iteration, with a good amount of travel and a satisfying amount of click at the bottom of each press. 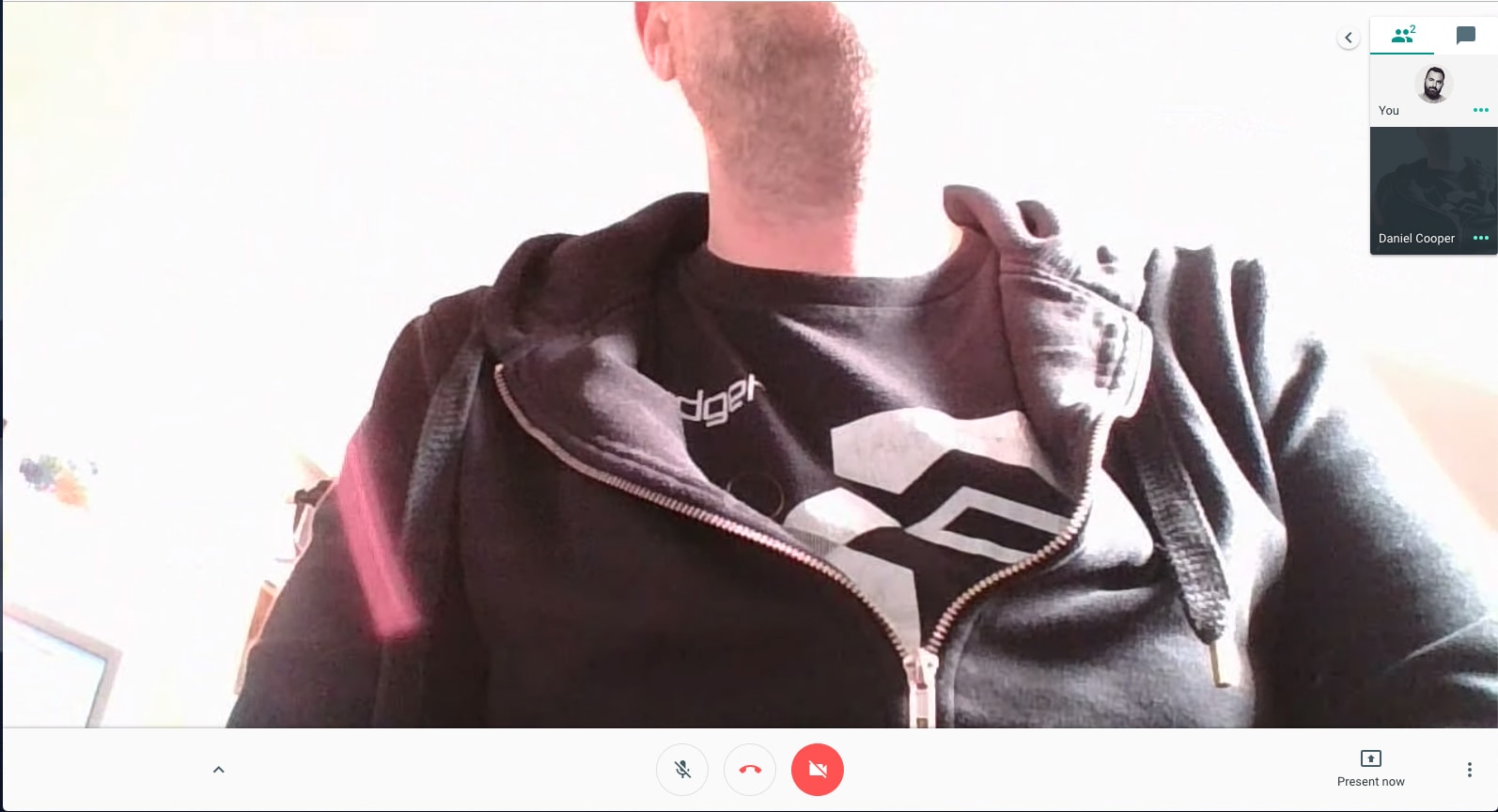 Last year, I found the X Pro's to be a little fussy, and things have improved here a fair bit. Unfortunately, the company tried to squeeze more functionality out of the pad by loading it with gestures that easily the system. The first thing you should do on buying this laptop is all these extra bells and whistles to make your life a easier.

As before, the X Pro's one- webcam hides in a spring-loaded case between the F6 and F7 keys. It's a boon for privacy fans, who adding ugly stickers to their laptops, but the angle and placement is still a problem. push the laptop further away from you to get a decent view, and the lack of adjustability remains annoying.

Last year's X Pro was hardly a wimp, especially for such a tiny machine that with an emphasis on portability. In benchmarks, it wiped the floor with similar machines from Dell and Lenovo and wound up on Best of 2018 lists from Laptop Magazine, The Verge and others. It's likely, too, that in a different chassis, this silicon could go faster, but the thermal limits imposed by such a thin body means .

Another limit is that Huawei may have been hoping for Intel to deliver a new, high-performance chip for the 2019 model. Unfortunately, the company has struggled to meet targets for CPU processes, forcing it to tweak existing models in the meantime. The new X Pro is packing an Intel i7-8656U a 15W Whiskey Lake CPU, which, chip nerds, is basically a slightly gussied-up version of the Lake i7-8550U from last year's model.

You can see in the benchmarks how much difference that new chip has made, with a (reported) 11 percent speed bump on its predecessor. The other changes mostly relate to the IO, since the new chip has integrated Gigabit and full Thunderbolt 3. That's probably why the machine can now handle full-bandwidth TB3 on its second USB-C port.

As SemiAccurate pointed out a while back, these new chips still don't have the fixes for Intel's x86 security failures. That means there's still a performance hit to deal with Spectre/Meltdown and its kin. And it leaves you wondering why Huawei felt the need to update the X Pro given the miniscule performance bump the chip swap offers.

My review unit is the top-shelf model, with the aforementioned 1.8GHz Core i7-8565U, 16GB RAM and MX 250 graphics. The other notable spec change between this and its predecessor is a 1TB SSD, double the 512GB SSD found in the 2018 model. Obviously, games with the graphics turned up to 11, this machine can eat most workloads for breakfast.

In our standard battery rundown test, the 2018 X Pro lasted for a respectable 11 hours and 7 minutes. That was good for a machine in its class, even though it fell short of the 12 hours the company promised. This year's 57.4Wh cell lasted for, I kid you not, 12 hours and 7 minutes, despite Huawei promising that it would run for 13 hours.

Under normal mixed use, running Spotify, Google Docs and browser tabs open, you can expect to be around 10 hours. That's more than enough for most mere mortals to go between trips to a power outlet. 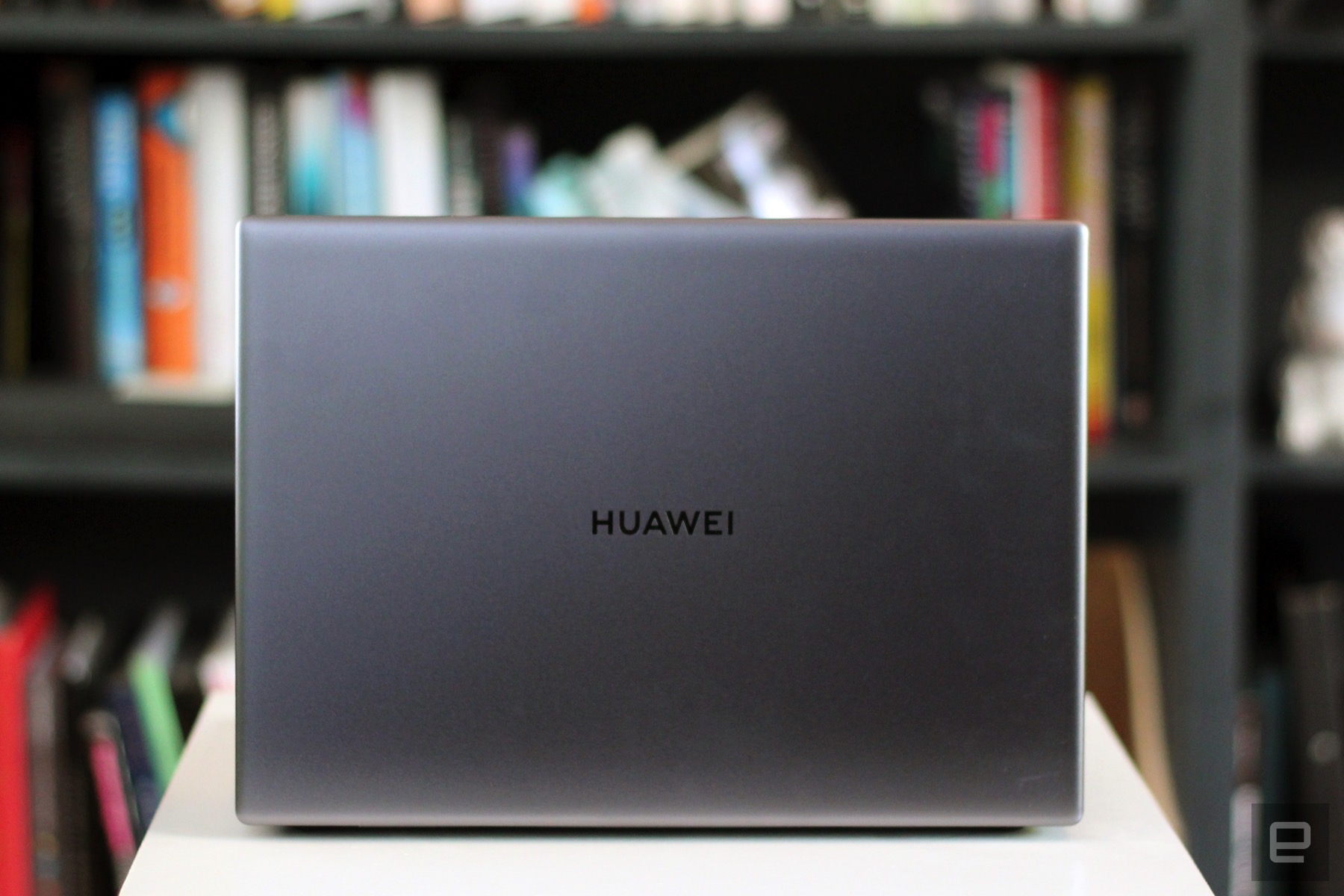 Huawei had been reticent in revealing prices for the X Pro, but has now confirmed that the i5 model will cost €1,599 ($1,799), while the i7 retails for €1,999 ($2,249). Those figures are for Europe, and it's likely that we'll see those numbers come close to their dollar equivalents the US.

If you're looking for a machine is as svelte and as powerful as the X then one option is Razer's Blade Stealth 13. That machine, which costs $1,900, has the same Core i7-8565U CPU and 16GB RAM as the new X Pro. Although graphics-wise, you'll only get MX150 rather than the 250 in the X Pro. But Razer knows a thing or two about gaming laptops, so you shouldn't feel too bereft, and it also has a 4K, rather than Huawei's 3K display.

One of the many versions of Dell's XPS 13 (2019) also packs the same chip and alongside a 13.3-inch 4K skinny-bezel touchscreen. Unfortunately, despite the high price, Dell has scrimped on the graphics, and the model only comes with built-in UHD 620. If you're looking to crunch spreadsheets, that's fine, but don't expect the XPS 13 to come out great when editing pictures or video. And, worse still, there's no USB-A port, so you're paying $1,999.99 for Dell's build quality, and overall aesthetics.

gag here is that the new X Pro means Huawei has discounted last year's model. And, frankly, that makes it one hell of a bargain, since it's the same laptop with a slightly slower chip. If you don't need an NFC sharing panel or full-bandwidth Thunderbolt 3, buy last year's model. On Amazon the i7 edition is available new, from third-party sellers, for as little as $1,259.99. 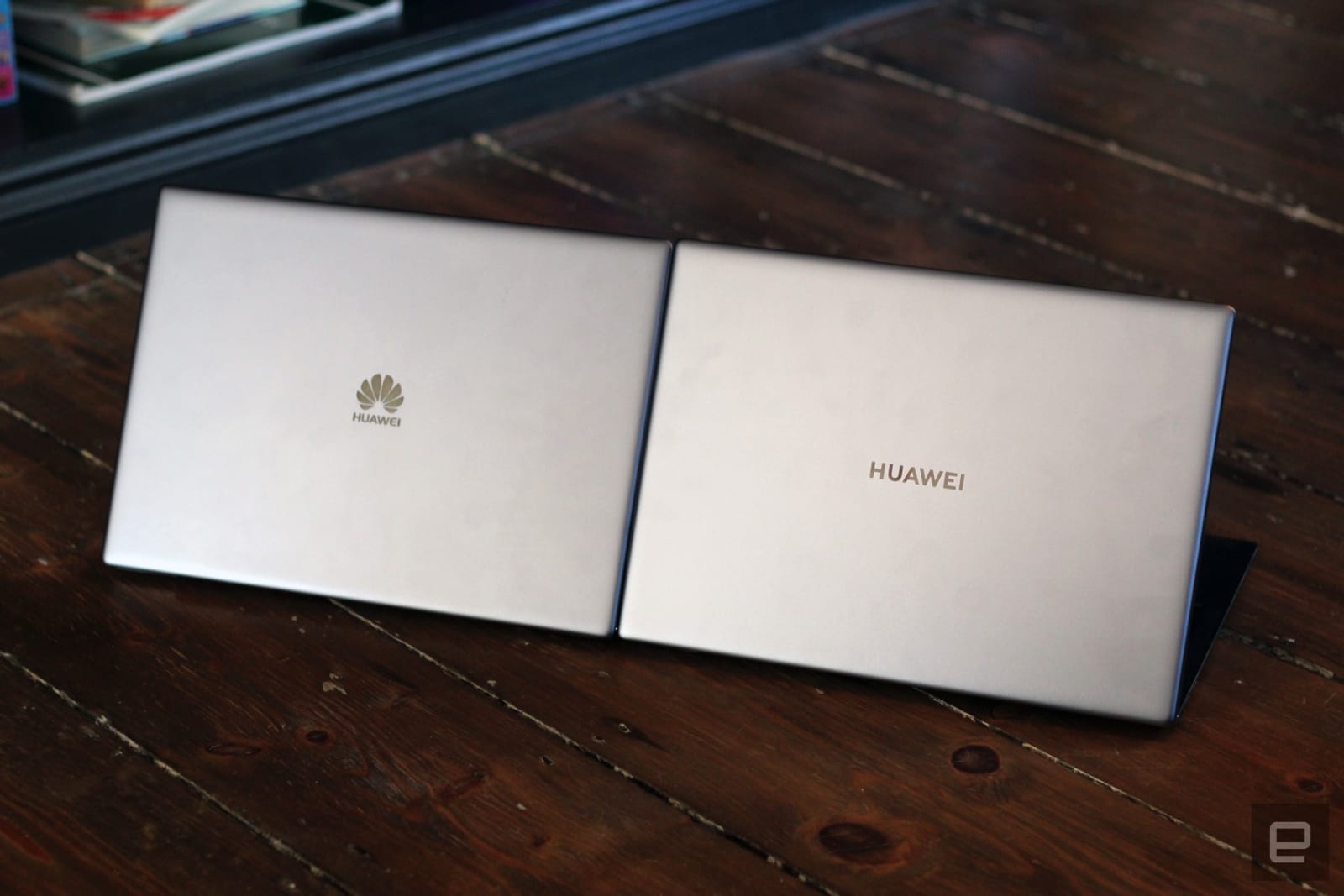 There's a lot to like about Huawei's 2019 X Pro, even if I'm not sure this laptop needed to exist. Sure, the company wanted to keep its premium machine updated with the latest and greatest silicon, but the payoff hasn't been huge. That shouldn't dim, however, the shine on one of the best laptops of 2018 receiving a little spit-and-polish for 2019. You can't criticize a company for doing well and then not choosing to reinvent the wheel.

The small tweaks don't add up to a , but Huawei has kept pace with its competition, all of which is being held back by Intel right now. Improved battery life and , which is useful for faithful, aren't bad things to have either. If you're upgrading from an older laptop, then this one should be on your list to try out it's really that good. The usual caveats about Huawei, especially its reputation in the apply.

In this article: 2019, gear, Huawei, MateBook, MateBook X Pro, MateBookXPro, microsoft, personal computing, personalcomputing, review
All products recommended by Engadget are selected by our editorial team, independent of our parent company. Some of our stories include affiliate links. If you buy something through one of these links, we may earn an affiliate commission.