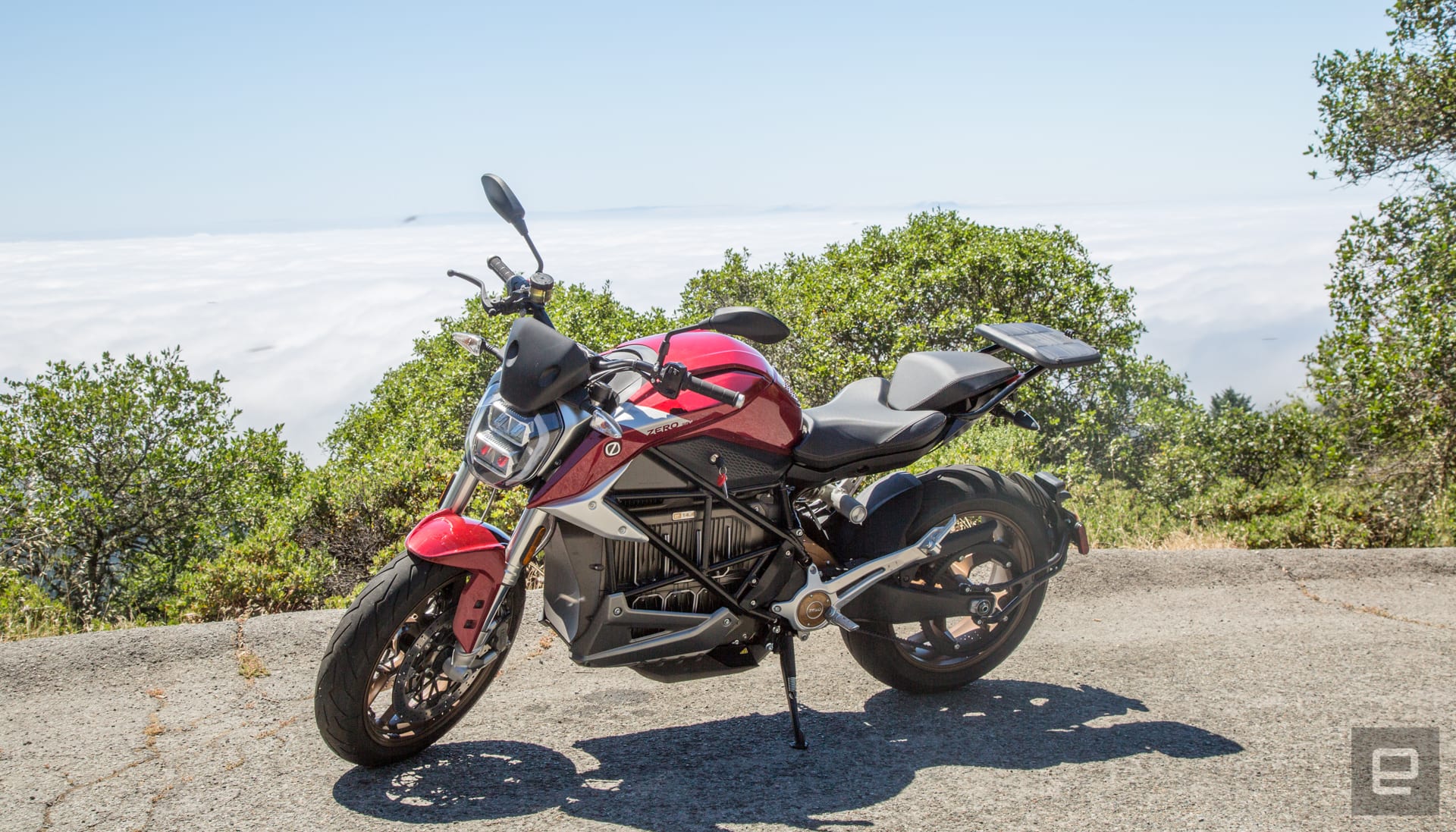 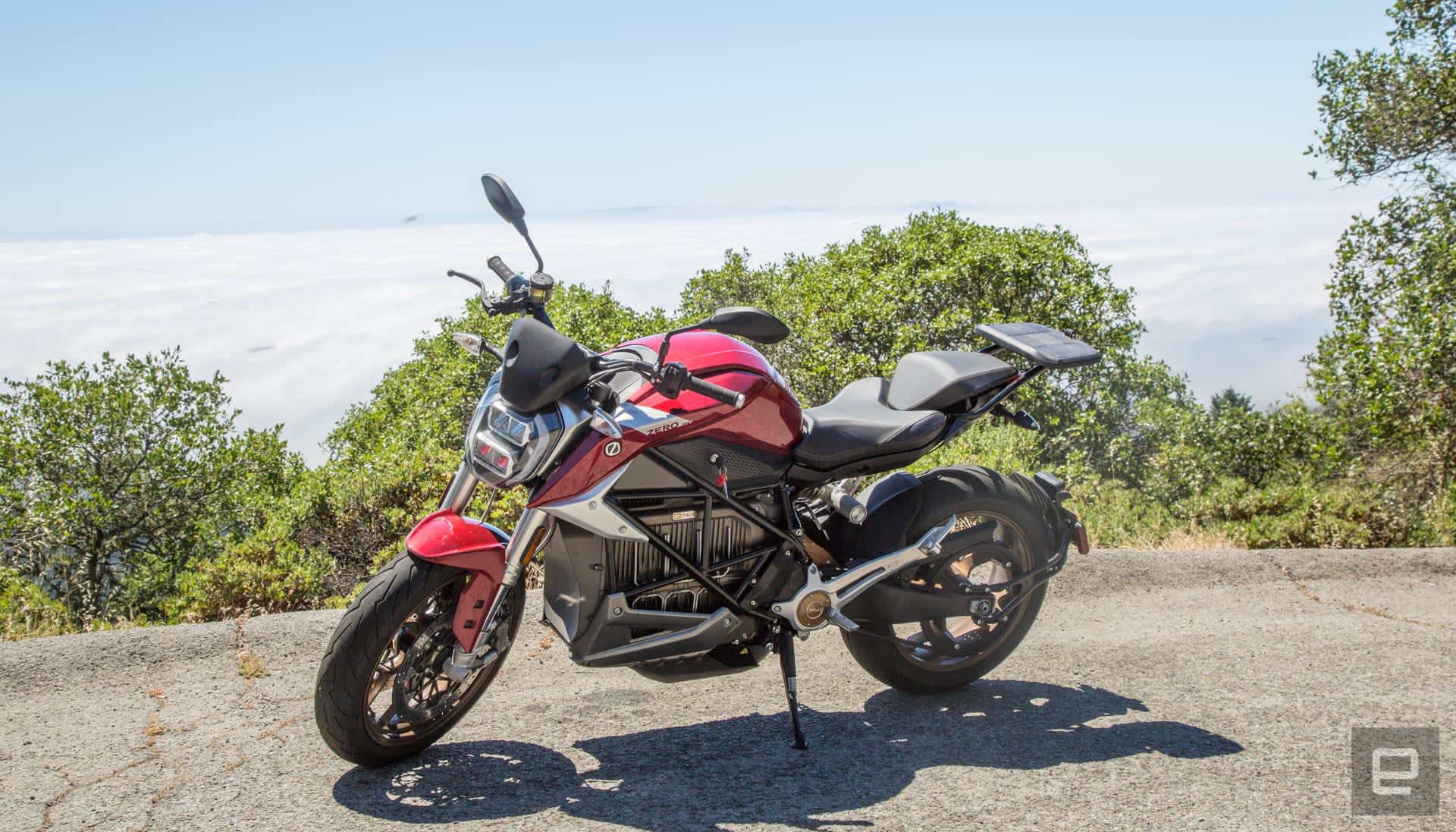 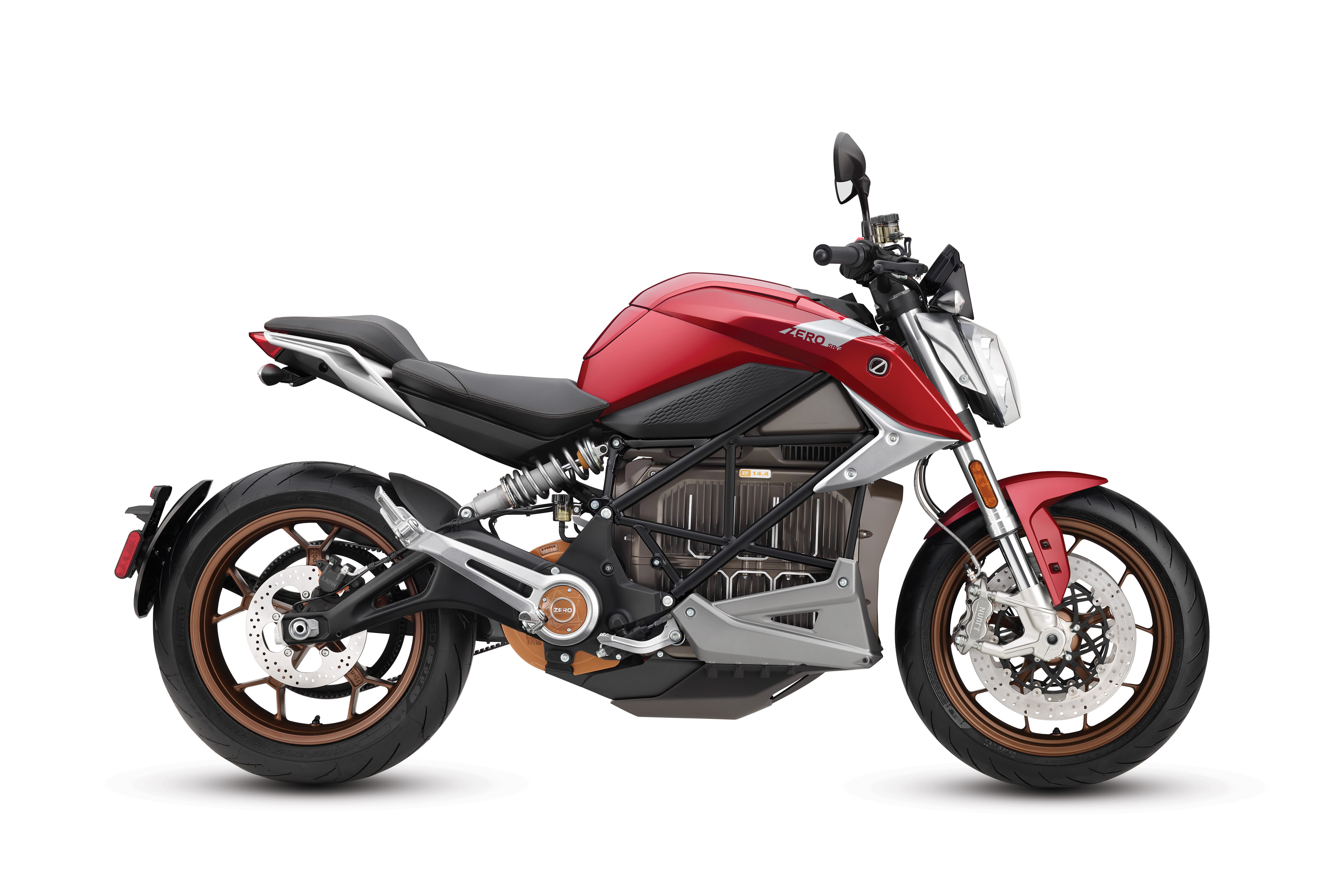 Zero has been on a roll for the past few years. Great electric motorcycles keep coming off their assembly line and the number I see on the streets of Northern California keeps growing. Before, if you rode an electrified motorcycle you got stares and questions. Now, not so much. Like Teslas, Zero is no longer an oddity. An evolutionary jump for Zero motorcycles, the SR/F delivers a wonderful ride with a nice dollop of connected tech. The range is more suited for commuters though and the display had a bit more latency than I liked.

How would you rate the SR/F (2020)?
We want to hear what you think. Post a quick review now to join the conversation!
Write a review

But instead of blending into the sea of motorcycles, the SR/F sticks out in a way other Zero models never did. A lot of it has to do with the design; the company decided to highlight its electric powertrain. The updated Z-Force motor is smack dab in the center of the bike while the battery pack gets orange accents. It looks good. But more importantly, it rides great.

The bike is a smorgasbord of new and updated parts. The company's latest motor is coupled to a 14.4kWh battery pack. The motorcycle maker's latest Cypher III operating system and Bosch's Motorcycle Stability Control (MSC) keep the bike under control. While the monochrome dash cluster found on other Zeros has been replaced with a full-color, 5-inch TFT LCD display. Oh, and it comes standard with a level 2 charging port.

The combination of all those elements means this isn't just an evolution of the company's lineup. It's actually a leap forward. The past few years I've remarked on how much fun it is to ride an electric motorcycle. That excitement is still there, but some of the rougher edges have been smoothed out for a more enjoyable experience overall. 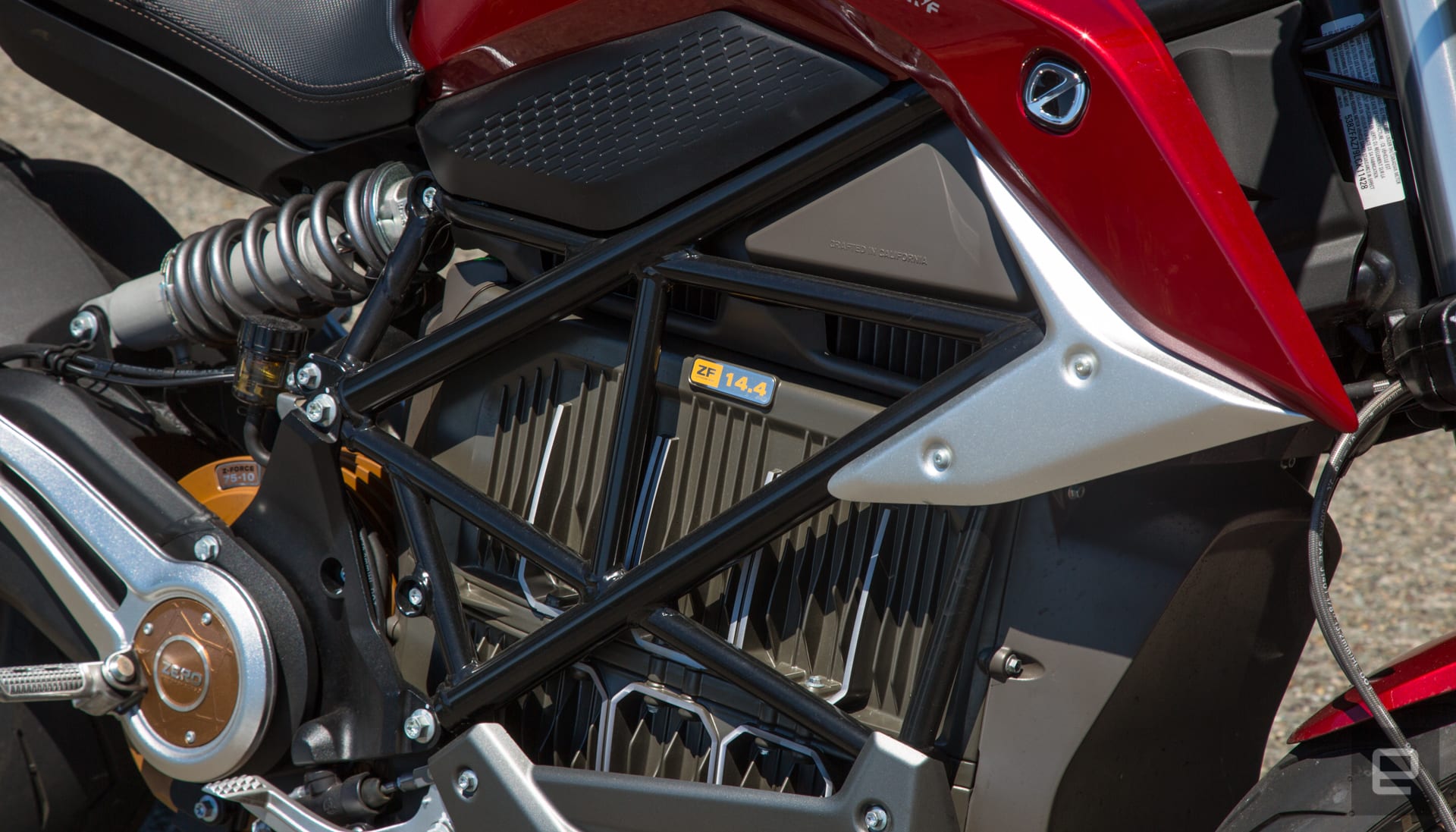 The 110 horsepower and 140 pounds of torque are kept in check by the updated system and I still got the excitement of taking off like a shot. But the acceleration is smooth and more importantly, the anti-lock brake system and stability control features gave me confidence that if something went hinky, I could stop, slow down, or maneuver around any obstacles

The bike's neutral steering position made for an exciting and stable ride through mountain passes. Slow for a turn, lean, accelerate out and repeat. The lack of a clutch still takes me a little bit to get used too, and after a half day of riding, I only caught myself twice reaching for a phantom lever with my left hand during the month I had the bike.

Riding the SR/F is a refined experience that still provides mile after mile of enjoyment. But the tech doesn't stop at the powertrain and handling.

The inclusion of the level 2 charging port as standard means no longer looking for an electrical outlet while riding beyond the range or paying extra to add the port to a bike. The 14.4kWh battery pack can recharge at up to 6kW for the premium model and 3kW for the standard model. That seems low but remember the battery itself isn't that large, to begin with. I'd still opt for the premium bike. The SR/F starts at a whopping $19,000 and the premium model will set you back $21,000. If you're already spending that much for an electric motorcycle, you might as well splurge on the quicker charging one. I would typically ride for a while, stop for lunch and hook up the bike and be ready to continue my ride within 45 minutes. Again, the inclusion of the level 2 port makes longer trips possible. But to be honest, that's not the bike's primary use case.

Zero says the SR/F has a city range of 160 miles. While riding around San Francisco, mostly in ECO mode, I got 140 miles. This was about a week's worth of riding to work and back and running errands. But once I left the city and started riding on highways, that range plummeted to about 70 miles. Speed kills electric batteries and the human body isn't very aerodynamic. That places the SR/F squarely in the commuter bike market with a few fun jaunts on the weekend if you do some planning.

For those commutes, the bike (like many of its predecessors) has a storage area where the gas tank would go. It locks and has two USB ports so you can charge your phone while transporting, let's say, five burritos. 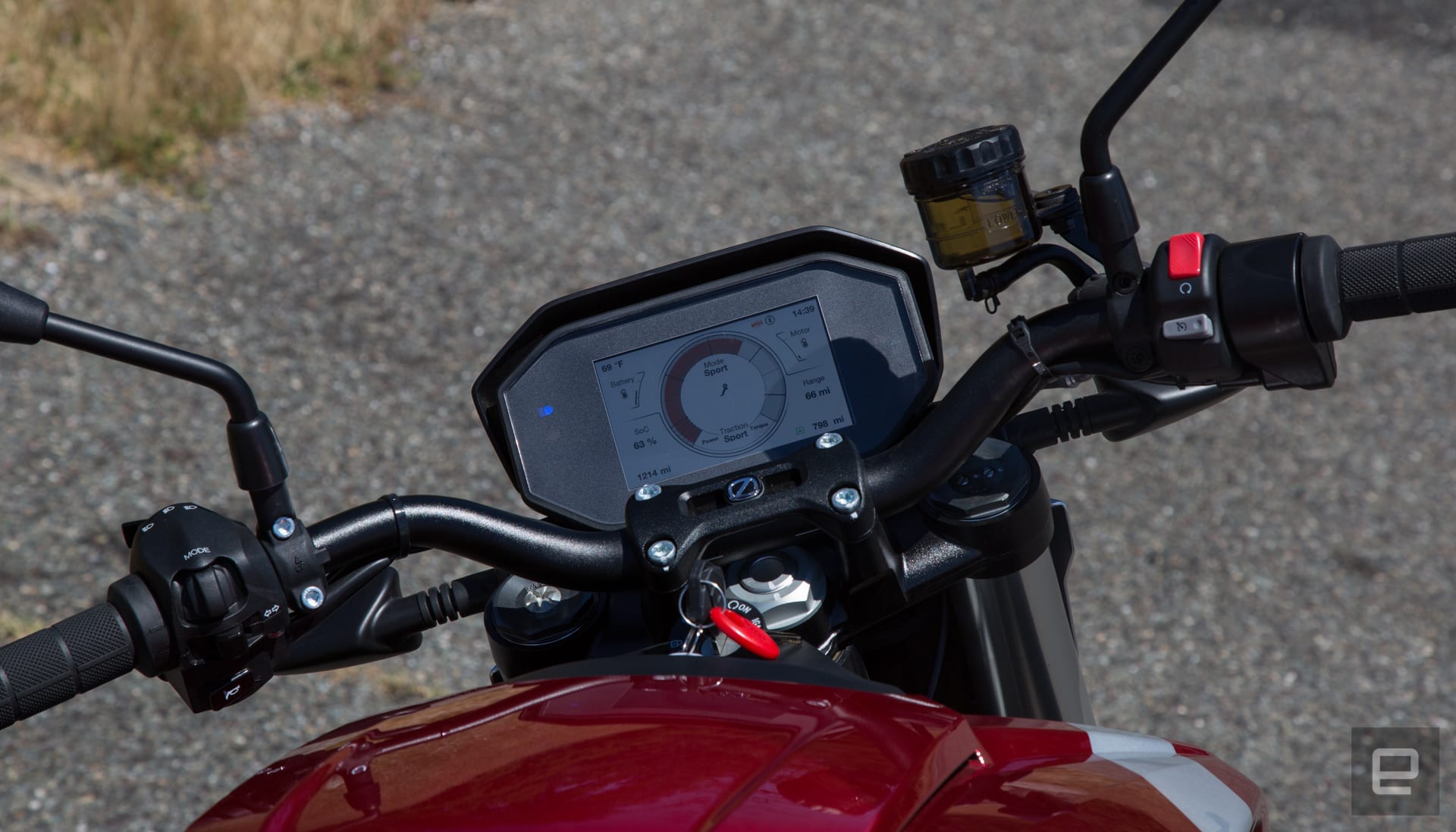 Above that is the new full-color display. Zero has done a commendable job keeping the system from becoming too overwhelming with information. It has just enough to keep you informed of what's going on. But with new tech comes new features. Cruise control, heated grips, ride modes and other options are all controlled by a single button/toggle/lever. To use anything there's a learning curve that involves pressing and holding, then moving through settings. It took me two to three days to figure it out.

That said, I kept turning on the heated grips instead of changing the ride mode. Sure, my hands were toasty, but I wanted to go faster. Once you "get it" you're set, but it takes a while. One issue I did have with the system is the slight latency while moving through settings. In a car, I'd ignore it, but on a bike, the last thing I want to do is be looking down at the gauge for any length of time especially on San Francisco's busy streets.

If you'd rather set it then forget it, the ride modes can be adjusted via the new companion app. Like the rest of the bike, the app is better in almost every way. The layout is easier to navigate, and the information is displayed in a more logical way. There is a splash screen that also includes the latest news about Zero that seemed more about self-promotion than anything, but I guess this review will end up there eventually. So woohoo?

Overall, though, the tech and the bike's 3G connection make it smarter than most anything else out there on two wheels. I could keep track of the bike's charging and send my modified ride modes to the bike before riding. 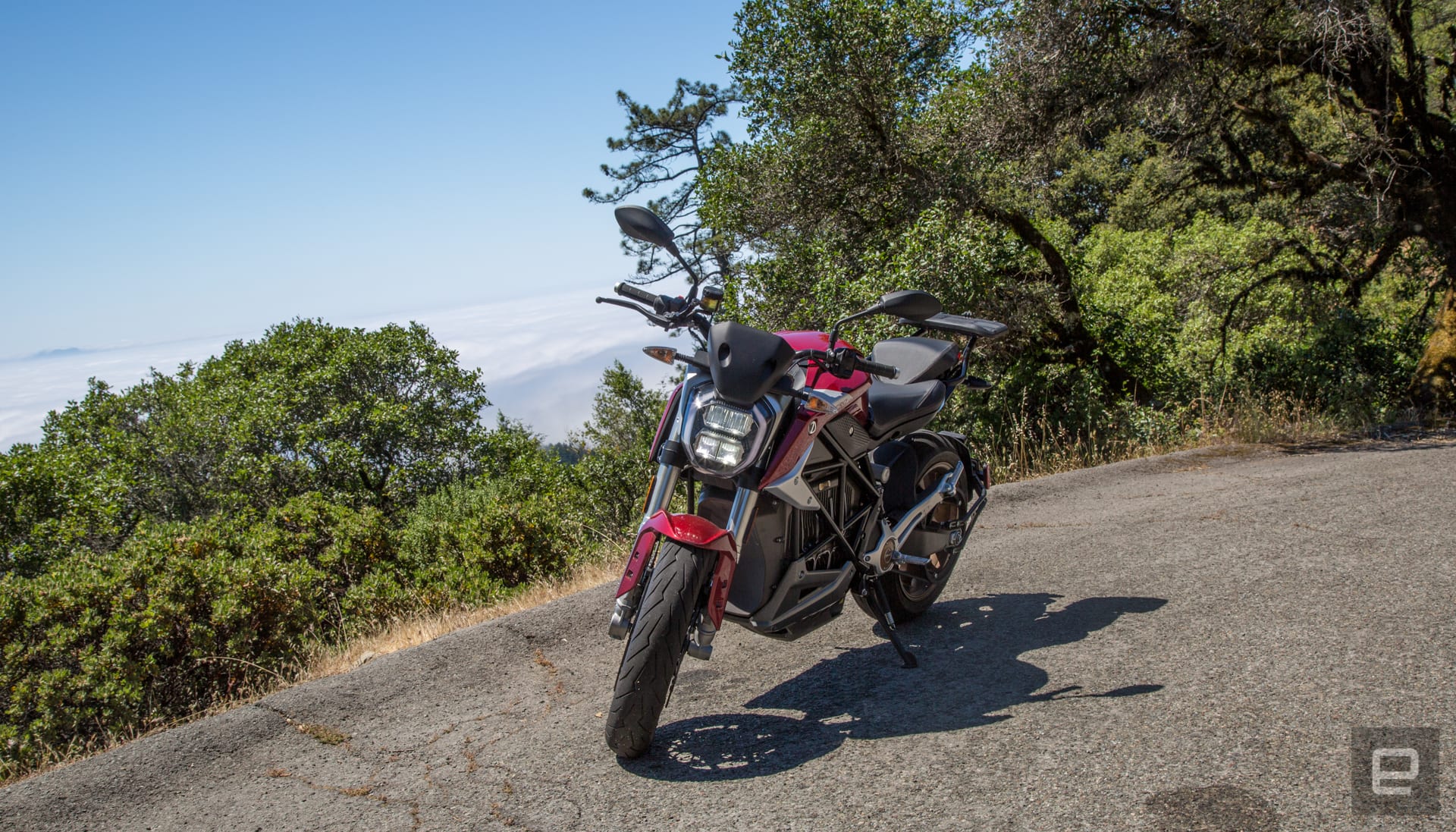 That's the best part of the SR/F. It's a piece of machine wrapped in technology that is a blast to ride. Technology and transportation should be the means to an end. When it overwhelms, it can spoil the vehicle. Here it's in balance with a motorcycle that you want to ride. Even without the app, or smart cluster, the SR/F is great (shiny displays are just a bonus).

Source: Zero Motorcycles
In this article: design, electric motorcycle, ev, gadgetry, gadgets, gear, green, review, SR/F, transportation, uk-reviews, video, zero, zero motorcycles, Zero SR/F
All products recommended by Engadget are selected by our editorial team, independent of our parent company. Some of our stories include affiliate links. If you buy something through one of these links, we may earn an affiliate commission.