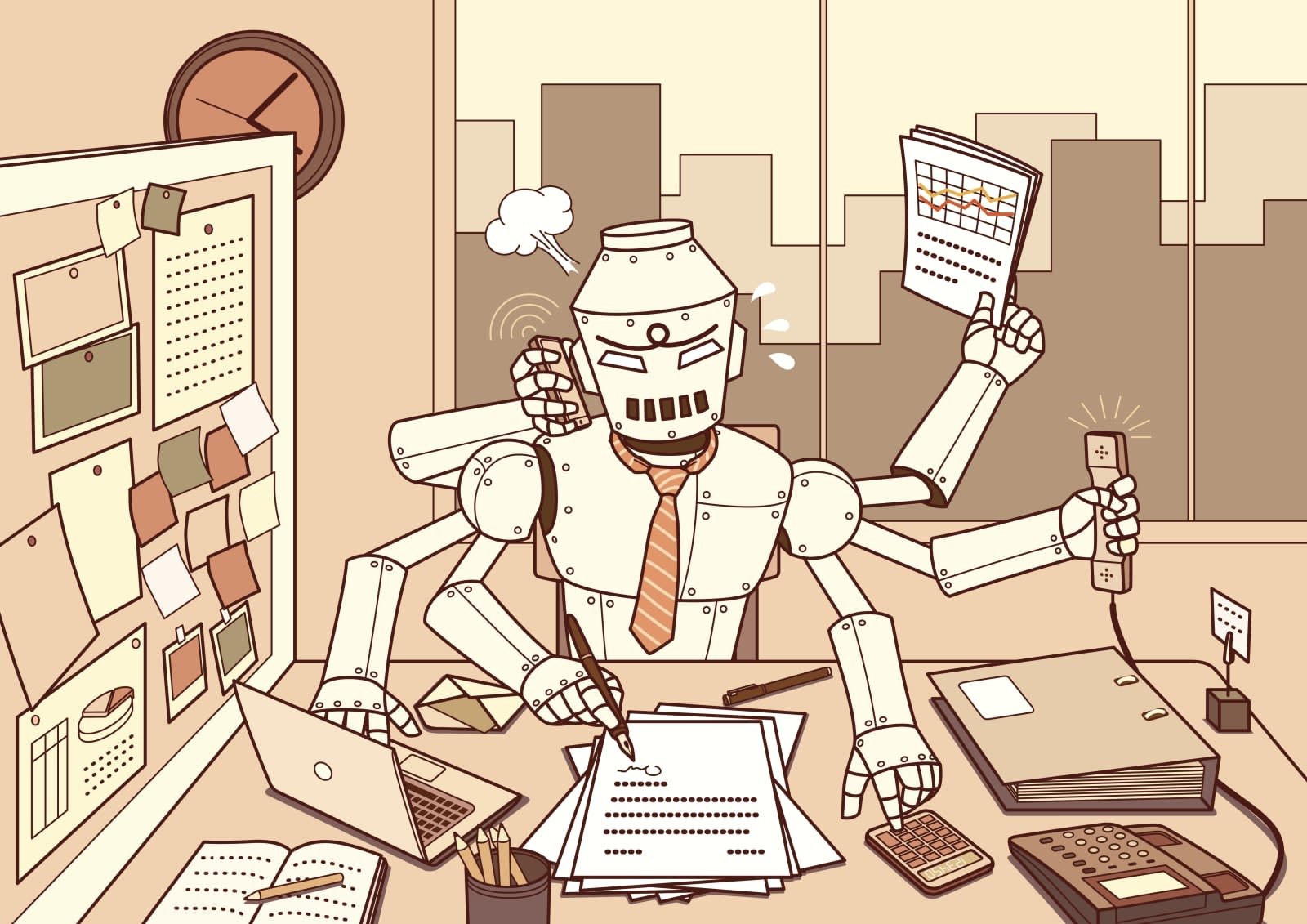 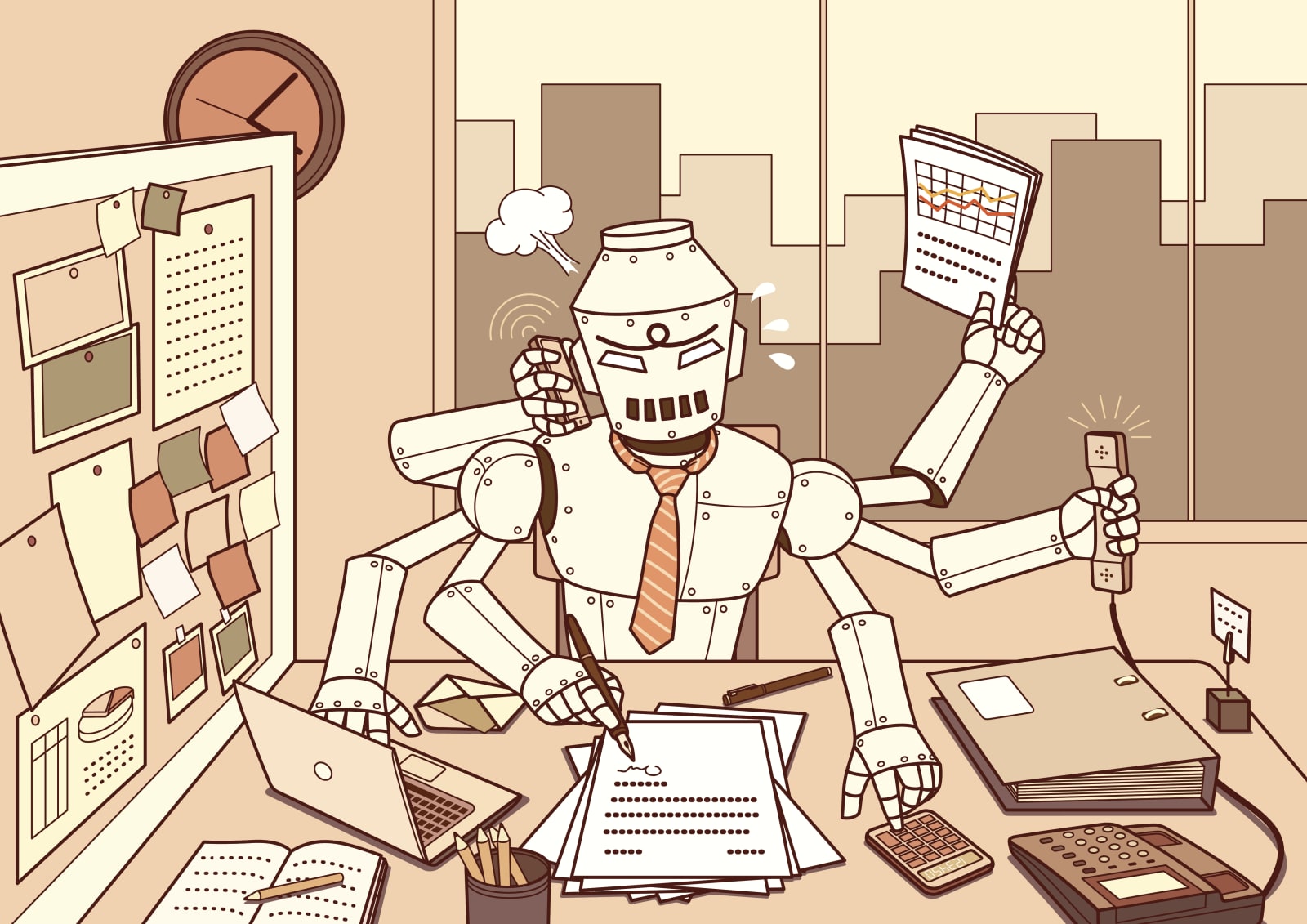 AI and automation have revolutionized the manufacturing sector with robots working alongside humans on factory floors. Now, those same sorts of technologies are beginning to find their way into corporate offices and are rapidly changing the way we conduct business.

That starts with recruitment and onboarding. "Having a face-to-face meeting with a human seems to be an incredibly powerful way to communicate," Samer Al Moubayed, co-founder and CEO of Furhat Robotics, told Engadget. However, he points out that even the most experienced and well-trained recruiters occasionally succumb to subconscious biases while conducting interviews -- be they based on age, gender, race or even just a candidate's responses to pre-interview chit-chat.

And that's where Furhat's social robot comes in. The 16-inch tall, nearly 8-pound robot is designed to sit at eye level and provide a physical presence with which to interact, as opposed to an onscreen chatbot or virtual phone assistant. Its "face" is a swappable mask onto which a backlit, animated image of a person's face is projected. A pair of 2.5-inch hi-fidelity stereo speakers provide the robot with a voice. The robot itself can be applied to a range of applications, but since October 2018, Furhat has teamed with Swedish recruitment firm TNG, leveraging its technology as a robotic recruiter called Tengai.

"A social robot is just another device, but what makes it unique is its ability to communicate in ways that are much more natural," Al Moubayed said. "We think using a social robot to perform a job interview... can have a very interesting effect on the interview process or the candidate experience compared to a survey online, web test or even meeting a human."

"It typically takes about seven seconds for someone to make a first impression and about five to 15 minutes for a recruiter to make a decision. We want to challenge that," Elin Öberg Mårtenzon, chief innovation officer at TNG's Stockholm office, told the BBC in March.

While a human interviewer might subtly change the ways they ask candidates questions -- whether it's their tone of voice, the ordering of their questions or minor shifts in their body language -- Tengai asks every question the same way, in the same order, every time. Specifically, Tengai performs the initial candidate screenings, asking the same 28 standardized IQT questions of every candidate. Once the interview is complete, Tengai generates an anonymized transcript of the conversation and forwards it onto a committee of humans who review them and decide which candidates will move on.

Following months of testing and validation, Tengai began interviewing real candidates for TNG in May. An English-language version is slated for release at some point in 2020. Eventually, Furhat would like to develop Tengai sufficiently that the system can not only perform its rote interview tasks but also analyze the answers and make its own recommendations as to who to hire.

That capability is still a ways off but Furhat is already exploring ways for its robot to help people. In the last week of May, the robot (this time dubbed "SEMMI," or Socio-Emphatic Man-Machine Interaction) occupied a kiosk in Tokyo Station as part of a JR East field test and served as a travel concierge, answering travellers' questions in nine languages. Should this test be deemed a success, attendees of the 2020 Olympic Games might find a swarm of SEMMI's manning subway stations throughout Tokyo. While Tengai is built to help with hiring people, Amelia the conversational AI from IPsoft is designed to eliminate positions formerly held by humans. That may sound harsh, but really, do your or anyone you know actually want to work in a call center?

Amelia was created by former NYU professor turned IPSoft founder Dr. Chetan Dube. But she's no simple chatbot. This conversational AI is capable of understanding the emotional state of the person on the other end of the line and adjusting her responses and gestures accordingly. What's more, should Amellia get a caller that she can't handle personally, the system will transfer the call to a human operator. However, Amellia will stay on the line, listening to how the humans resolve the situation and applying that new knowledge to her repertoire -- once she gets the OK from her human supervisor, of course.

The same holds true when complying with state and federal regulations. If Amelia isn't licensed to perform a task in a specific state -- i.e., handling a change of address request -- she'll automatically hand off the call to a licensed colleague to complete the process. This saves humans in the call center time and effort, since they only need to be involved once Amelia hits a snag.

Nearly two dozen companies across a variety of industries, from healthcare and insurance firms to telecoms and banks, currently employ Amelia. Allstate Insurance began using Amelia in 2017 to great effect. Average call times dropped by 24 seconds while customers reported having their issues solved on the first call rose from 67 percent to 75. Amelia is trained to answer more than four dozen industry-specific questions and walks callers through various common processes like changing or reinstating their coverage and obtaining proof-of-insurance.

Amelia currently serves around a quarter million Allstate customers a month. The company hopes to further expand the size and scope of her role moving forward, eventually developing her sufficiently to "interact directly with agents and customers to solve issues often too complex for a single human," according to a March press release.

In March, IPsoft launched 1Bank, a conversational banking app powered by Amelia. It is designed to help customers find transactions simply by asking, proactively informing customers of incoming bills and warning them if they have insufficient funds, or setting up recurring bill payments

Amelia is a high-profile example of an underlying technology known as robotic process automation (RPA). This emerging field of automation is aimed squarely at reducing the amount of drudgery and mindless repetitive tasks human office workers have to do. That includes billing, accounting, customer service, data processing and inventory control.

"What we are trying to do is to take away the monotonous and repetitive -- the grunt work -- from people," Automation Anywhere CTO, Prince Kohli, told Engadget. "It knows what you want to do, you can ask it to do [a specific task], or it will know that you need something before you ask for it."

However, unlike Amelia, many RPA systems (colloquially known as bots) are quite dumb, little more than beefed-up scripts. They're generally designed to help employees work smarter and faster rather than replace them outright. Automation Anywhere's offering, IQ Bot, is a bit more capable, with the ability to ingest and assimilate both semi-structured and unstructured data such as invoices, contracts, purchase orders, emails, and images in addition to the standard spreadsheets and CSV files.

"Invoices have no standard template, they have no standard format," Kohli noted. "And there are as many invoices as a number of vendors out there." So instead of forcing a human worker to parse through that information, IQ Bot will autonomously figure out what actions need to be taken and relay that information to the relevant subsystems, without the direct supervision of a human. "Everything can be done as if a person was working on it without the person having to do this kind of work," Kohli said, though he did point out that a human in the loop is still required for compliance matters, much like Amelia and change of address issues.

"I think anyone can gain from this," Kohli argued. "It is more about a mindset that 'I will let computers do what they do best, while I do what I do best.' I am convinced the nature of work is going to change. I know that, I mean, it's the effect of computing, right?" Just as computers themselves overturned the existing office hierarchies and business models 20 years ago, "just like that, intelligent automation is going to change work," he said.

In this article: 1Bank, AI, Amelia, automation, Automation Anywhere, business, furhat robotics, IPsoft, IQ bot, robots, Samer Al Moubayed, SEMMI, Tengai, TNG, Tokyo Olympics, tomorrow
All products recommended by Engadget are selected by our editorial team, independent of our parent company. Some of our stories include affiliate links. If you buy something through one of these links, we may earn an affiliate commission.