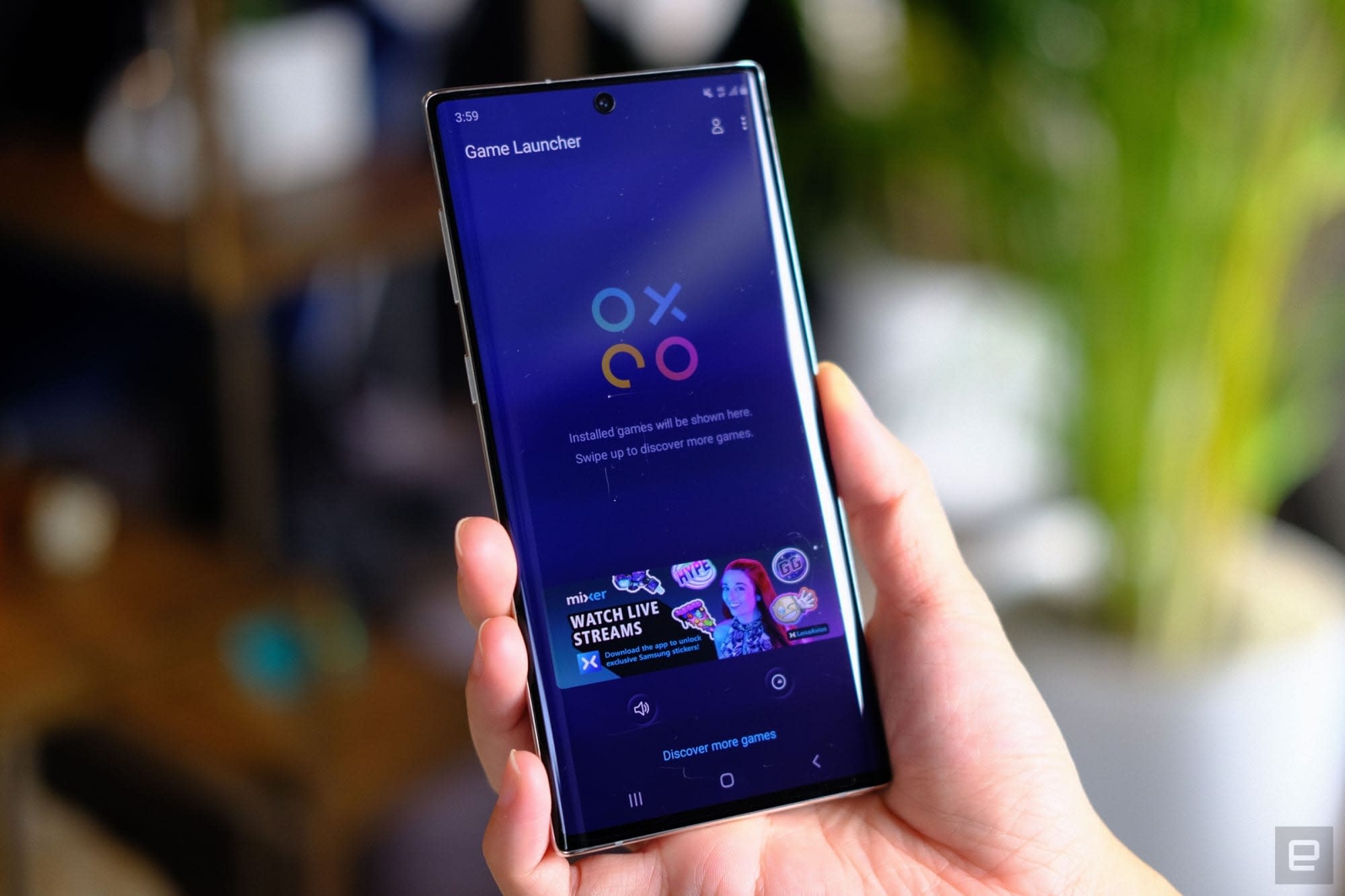 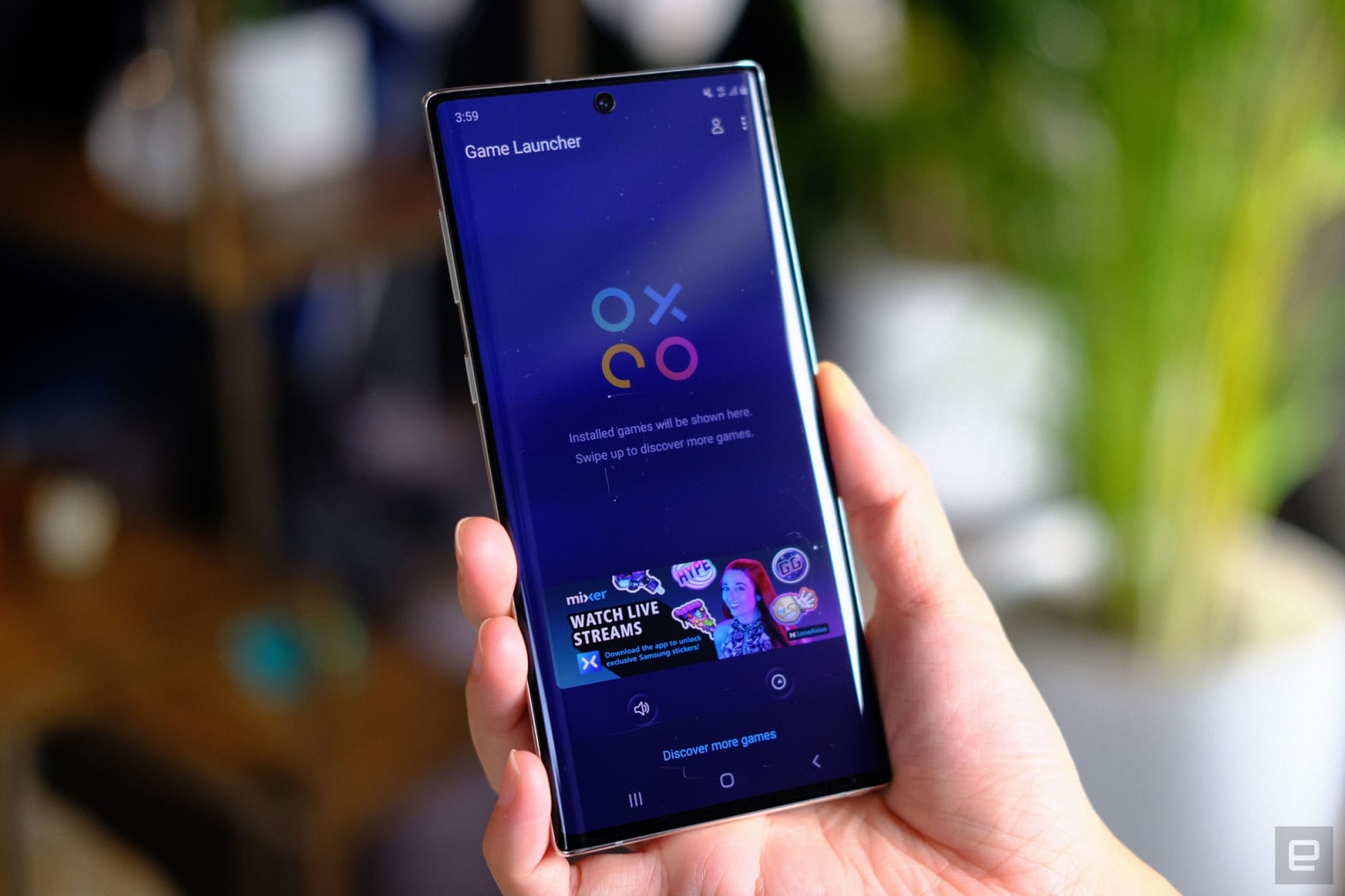 At a typically lavish event in Brooklyn this afternoon, Samsung is making an announcement that surprises exactly no one: the Galaxy Note 10 is here. Well, almost. Samsung's largest, stylus-enabled flagship device will be available on August 23rd in the US, with pre-orders opening tomorrow. Just as the rumors predicted, Samsung made two sizes of the Galaxy Note 10 this year, but right now we're just focusing on the smaller option. (Details on the big guy can be found here.)

[Check out our extensive hands-on of the Galaxy Note 10 and Note10+!] As the many, many leaks indicated, the Note 10 is a refinement on its predecessor, with smaller than ever bezels and a center-aligned camera hole on the front that makes for a pretty striking impression. It's subjective, but I feel like the center camera hole just looks better than the off-center one found on the Galaxy S10 line.

The smaller of the two Galaxy Note 10 models still packs in a 6.3-inch screen, so it's not exactly small (just one-tenth of an inch smaller than last year's model). But with the bezels reduced even further, it feels more compact than before. However, the Note 10 takes a surprising step back in terms of screen resolution: the panel runs at 2,280 x 1,080, basically an extended 1080p screen since we're all about the extra-tall display these days. That's down from the quad HD display found in last year's model. For a device geared towards those who want the biggest and best they can get, it's a surprising change.

Moving beyond the display, the Note 10 features a refined S Pen that includes an accelerometer and gyroscope for the first time (well, outside the Galaxy Tab S6 that was just announced last week). That means the Note 10 detects gestures like flicking in addition to the button presses and drawing on the actual screen. It sounds like a classic Samsung gimmick, but it enables some neat features like jumping between cameras or switching between shooting modes, using the pen like a Harry Potter wand. The S Pen also can now automatically convert handwriting to digital text and let you export it into whatever format or file type you need, including Microsoft Word.

Circling back to the cameras, it's a similar setup to what you'll find on the Galaxy S10+. The three shooters on the back include an "ultra-wide" 16-megapixel camera with an f/2.2 aperture; a standard 12-megapixel option with f/1.5 and f/2.2 aperture options and optical image stabilization; and a telephoto 12-megapixel camera with OIS and an f/2.1 aperture. The front camera, meanwhile, clocks in at 10 megapixels with an f/2.2 aperture and an 80-degree field of view. Beyond those specs, Samsung's low-light Night Mode is included here and works on the front camera as well as the rear. On the Galaxy S10 line, where it was first introduced, it only worked with the rear cameras.

While Samsung may have cut some corners on the display, relatively speaking, the internals here are as powerful as you'd expect from a Samsung flagship. As is often the case with Samsung's phones, processors vary by region, but the company's spec sheet claims we're looking at 64-bit, octa-core processor paired with 8GB of RAM and 256GB of internal storage. That processor is also Samsung's first 7-nanometer chip, for those keeping track. The battery is also massive, at 3,500 mAh, and Samsung says a quick charge of 30 minutes gets you enough power to "last through the day." We'll have to put that claim to the test, to be sure, but at least you can rest easy knowing fast charging is on board here.

Oh yeah, there's no headphone jack this year, and the Note 10 is running Android 9 Pie; as usual, you'll probably wait months before it is upgraded to Android Q. But hey, on the plus side, the Bixby button is gone!

As you probably guessed, the Galaxy Note 10 isn't going to come cheap: it starts at $949 in the US. Carriers AT&T, T-Mobile, Sprint, US Cellular, Verizon (Engadget's parent company) and Xfinity Mobile will all have the phone in stores and online as of August 23rd. Other retailers including Best Buy, Amazon, Target, Walmart and more will sell the phone, as well — if you're looking for an unlocked version, they'll probably be your best bet.

Speaking of carriers, it's worth noting that while the larger Galaxy Note 10+ will have a 5G model (that's exclusive to Verizon in the US, at least initially), the smaller version sticks squarely in the present with LTE connectivity. If you want to be on the bleeding edge in every way possible, you'll need to step up to the big boy.

In this article: breaking news, galaxy note 10, gear, mobile, note 10, note10event, samsung, verizon
All products recommended by Engadget are selected by our editorial team, independent of our parent company. Some of our stories include affiliate links. If you buy something through one of these links, we may earn an affiliate commission.