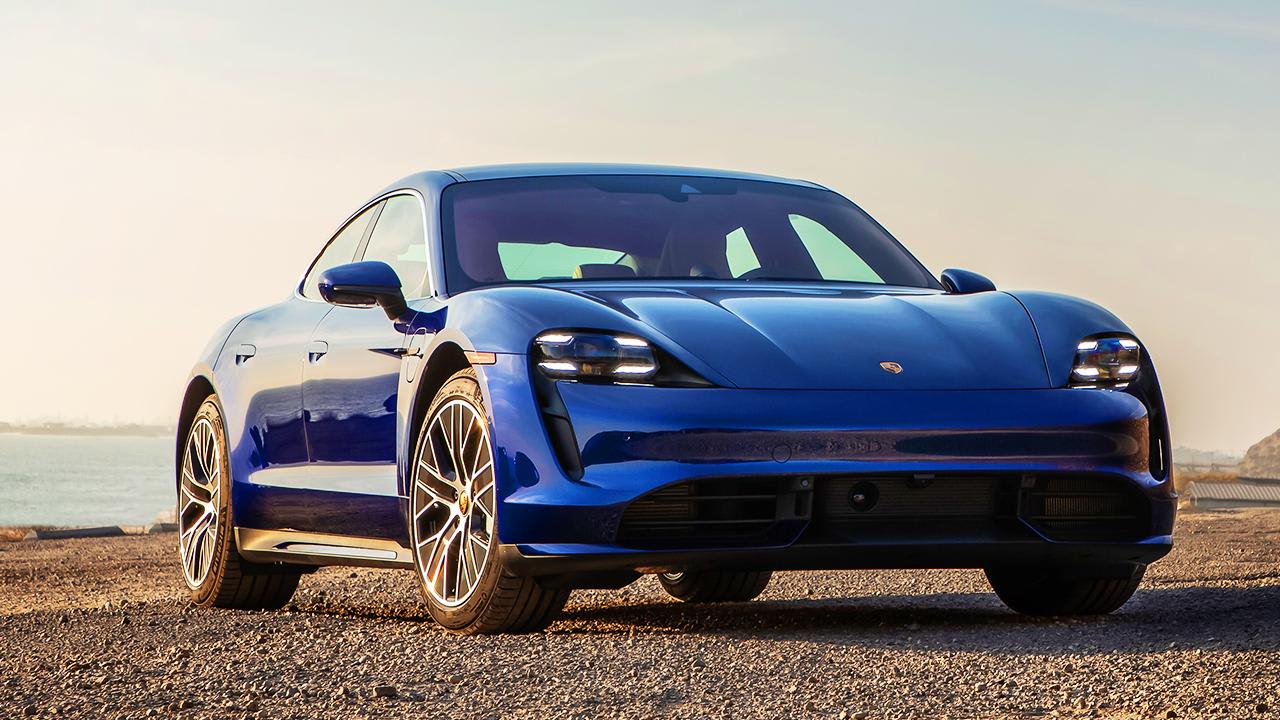 Driving a Porsche -- regardless of its body style -- is filled with expectations. The vehicle should go fast while whipping around corners. So it's no surprise that the automaker's electric Taycan (pronounced Tie Khan) offers those things. The revelation is that it does so, even with the heft of a 93.4kWh battery pack. Electric vehicles are great at accelerating quickly, helped along by that low center of gravity (because of all that battery weight). But the laws of physics still apply and cornering can be a challenge if an automaker wants to give drivers more than 100 miles of range. More range means more battery and more battery means more weight. But the automaker has decades of experience getting cars around tracks in the quickest manner possible and it applied that wealth of knowledge to its first electric vehicle. The result is spectacular.

Angeles Crest Highway is one of the go-to destinations for performance drivers in Southern California. The mountain road is filled with switchbacks, long sweeping turns, and beautiful views. It's ideal for testing an electric sports car.

During my time behind the wheel of the Taycan, the vehicle handled tight corners with precision. Yes, the mass of battery under the seating area made itself known, but it was less prevalent than I expected. The vehicle's air suspension and dynamic chassis control do a lot of the heavy lifting here, making the car feel lighter than it actually is. 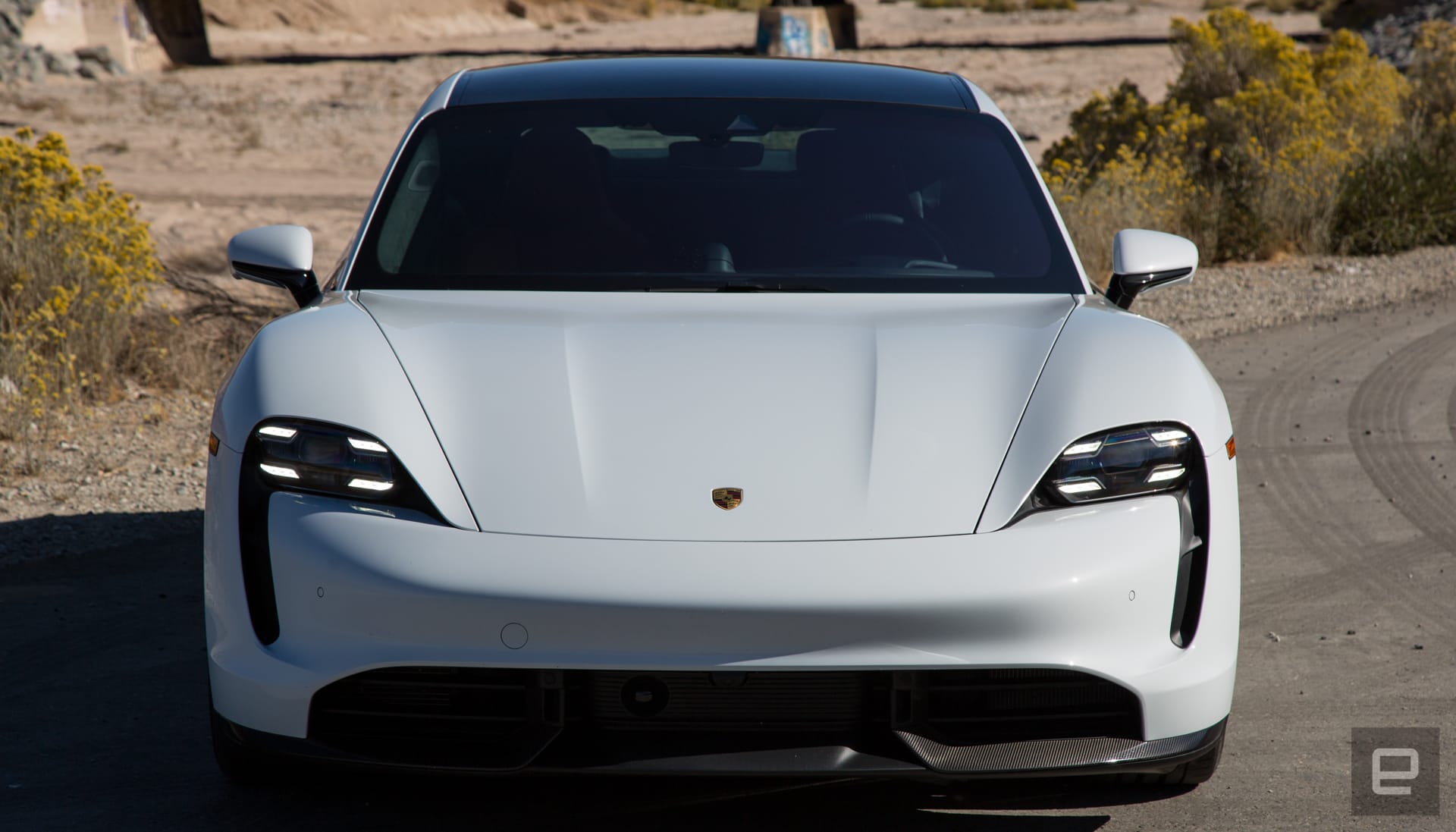 Yet the steering was tight without feeling twitchy. That makes the car ideal, not just for back-road and track days, but also daily use. In fact, in order to get to (and back from) Angeles Crest Highway, I had to do a lot of freeway and city driving. During that time, the Taycan displayed more composure on rutted bumpy roads than I anticipated.

The automaker says that the Taycan's ride sits between the Panamera and the 911. So it's not as smooth as a high-end luxury vehicle, but it is impressively composed on the roads it'll spend a majority of its time traversing.

Some of that ride quality comes from the electric powertrain. EVs just have a smoother ride because they're not battling the forces of an internal combustion engine while driving. Also, they go fast. In the case of the Porsche Taycan, it goes very fast.

I drove the Turbo S version of the Taycan with its 750 horsepower and 774 pounds of torque. It'll do zero to 60 in an internal organ-warping 2.6 seconds. It'll perform this feat again and again and again as I continually jam down the accelerator between corners in the mountains. Thermal management is tough though, and it's the reason some EVs can't continually and reliably perform at their peak. Porsche's engineers decided that if they were going to put the company's badge on a car, it should perform like its internal-combustion siblings. 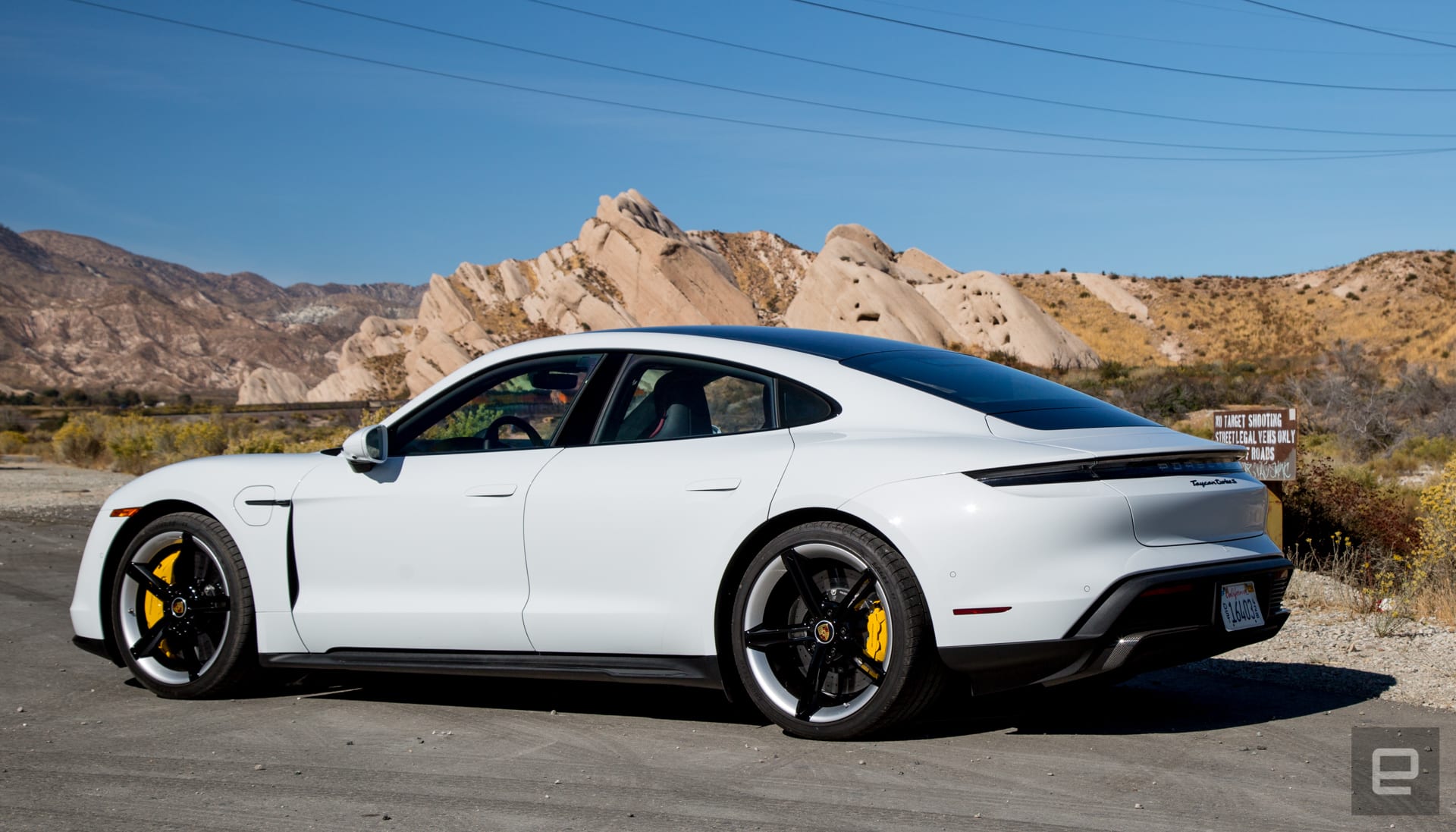 For the most part, it does. But it's unlikely most drivers will ever use the full potential of the Turbo S. The $185,000 price tag makes this the ultimate enthusiasts Taycan. For the rest of those interested in the car, the $151,000 Turbo will probably do the trick with its 670 horsepower and 626 pounds of torque. Or better yet, the $103,000 4S coming next year that'll do zero to 60 in 3.8 seconds.

Regardless of which version of the Taycan someone (with a lot of money) buys, they should be happy with the interior. Like other Porsches, the inside is driver-focused. The new digital dash cluster is bright and clear and even with the glare of the sun beating down on it, was easy to read. More importantly, it's simple to navigate between the on-screen features using the controls on the steering wheel.

The infotainment system in the dash is an updated version of the automaker's PCM system. I didn't notice any latency and I'm still a fan of the customizable home screen. There was some oddness with the navigation, but Porsche was very upfront about the fact that we were driving pre-production Taycans. So I'll have to wait until I get some serious time behind the wheel of a production vehicle to really put the system through its paces. 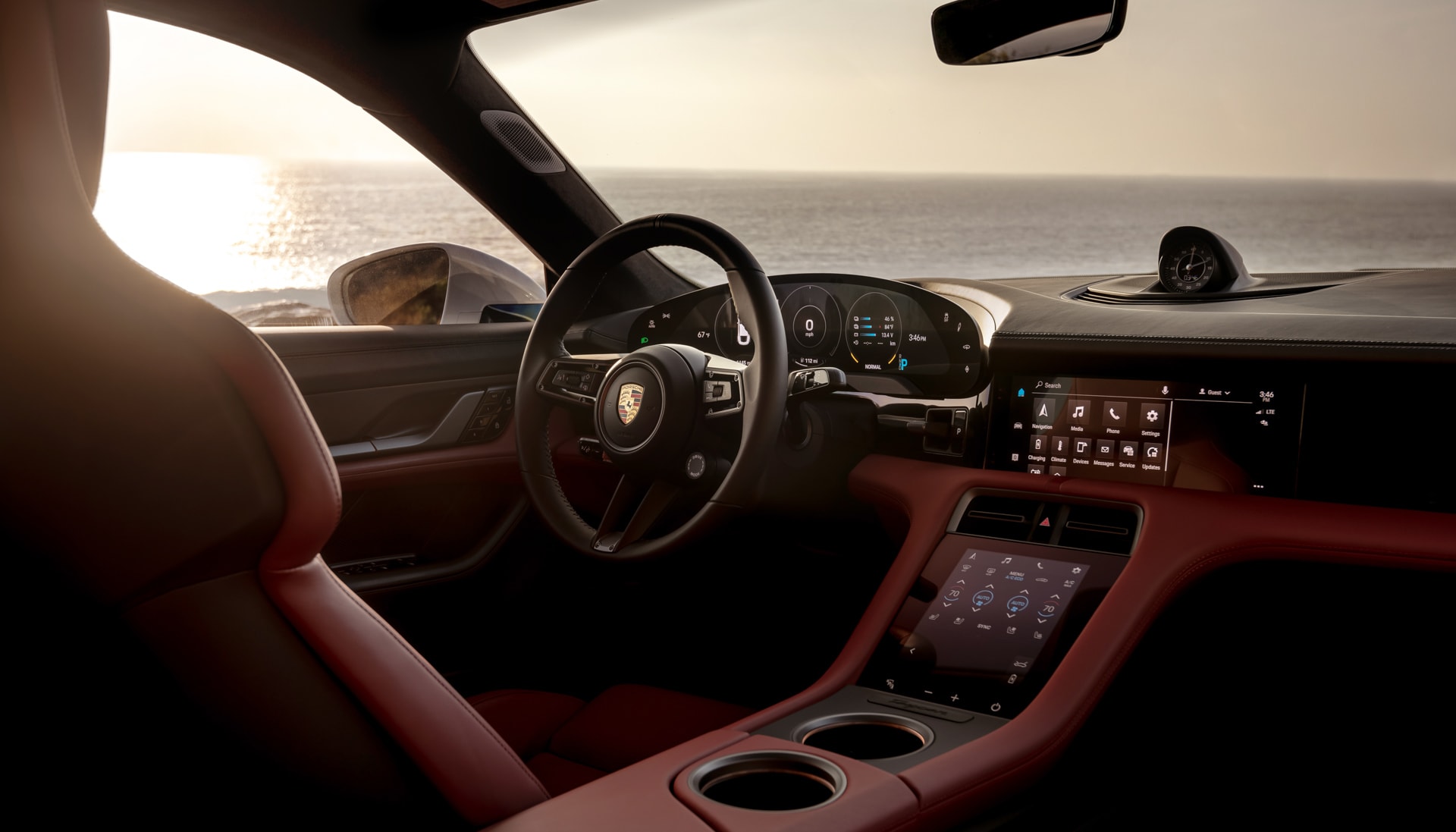 While we wait, it was nice to see Porsche jump onto the voice-assistant bandwagon. A simple "Hey Porsche" launches the feature and it does the usual tricks. But again, a production vehicle with final software will be needed for a proper test of the feature.

Below the infotainment display is a secondary touchscreen that controls the climate features with quick-launch buttons for navigation, media, phone and settings on the main screen. At the bottom of the secondary display is an area for navigating the main touchscreen and writing out addresses. The biggest issue here is that the cup holders in the center console are right in front of it. So if you have a coffee or soda there, you have to reach around it to use the lower portion of the screen.

Fortunately, the rest of the interior makes more sense and is very comfortable. I found the front seats to be both supportive and cushy enough for a long day of performance and freeway driving. The back seats, however, can be tight if you're sitting behind someone tall.

If you're in the driver's seat, you'll be happy to know that the vehicle's adaptive cruise control is outstanding in traffic. It handled cut-ins without incident and is a bit more aggressive to get you back up to speed when it encounters a hole in traffic. A plus for anyone in cities like Los Angeles where someone will tailgate you if you don't immediately fill a gap in front of you while on the highway. 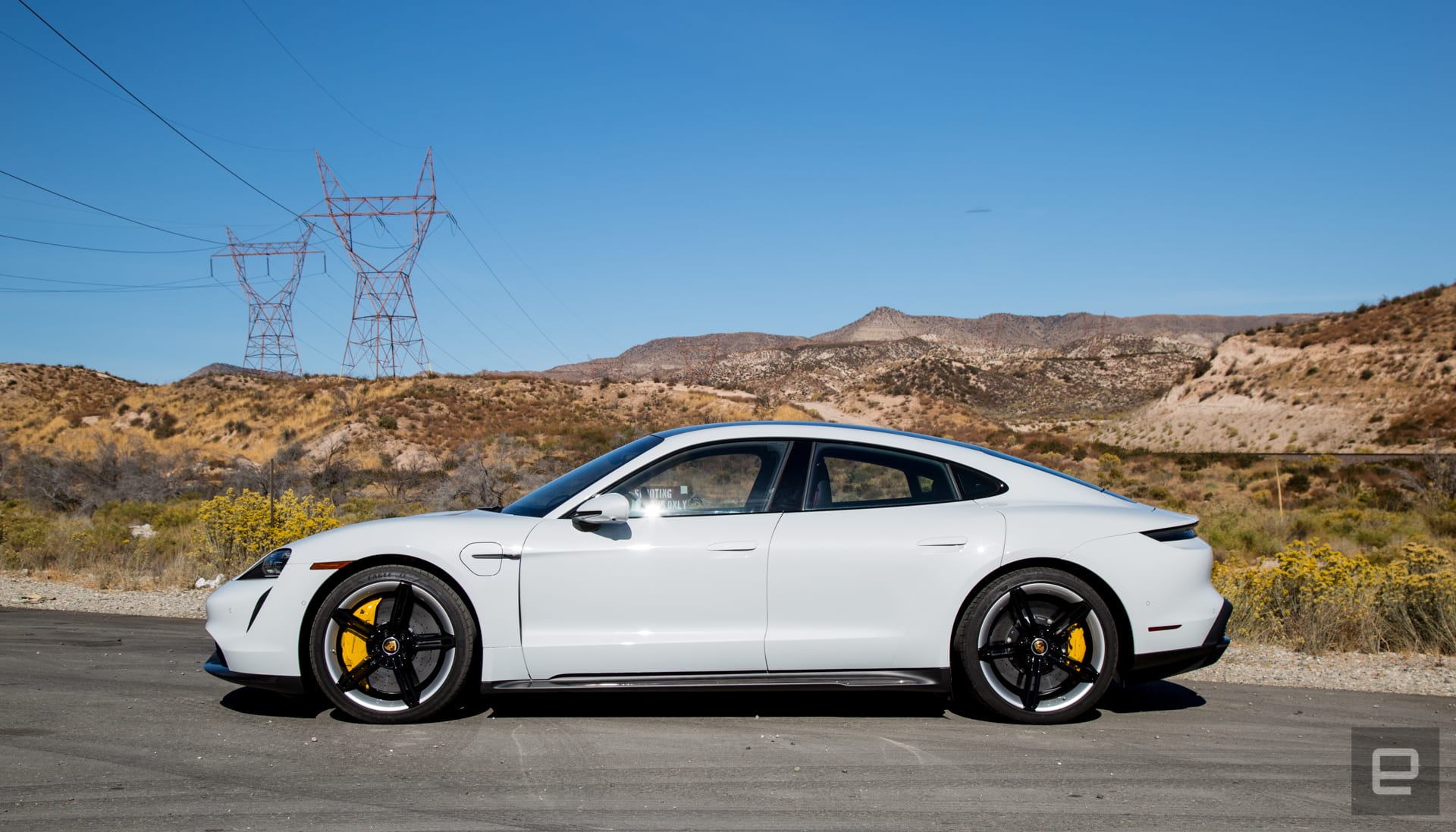 The lane keep assist is there to nudge you back into your lane, but it's very subtle. It's ideal for a sports car, but I ended up just shutting it off after about an hour of driving.

Whether you're on the highway or backroads, bringing the Taycan to a stop adds another level of tech to the car. Up to 90 percent of the stopping power is from regenerative braking. Even in the Turbo S while pushing the vehicle, most of the braking came from the electric motor slowing the car down. Porsche says braking can create 265kW of power for the car. That's impressive and it means that the car's brake pads won't need to be changed for quite a while.

I will say, that in hard braking when the car hands off the braking to the hardware there's a noticeable surge in stopping power. It can be alarming during high-performance driving the first time it happens. You will start to anticipate it after a few hours, but I'd rather have smooth braking from start to finish.

Weird braking issues aside, the Taycan is an impressive piece of engineering. Even in pre-production form, the car feels solid and ready for everything from cruising around town to tackling the track. The car's ability to recharge at up to 270kW means if you find a charging station that can push out that much power, you'll be back on the road quickly. And frankly, once you get behind the wheel of the Taycan, that's exactly what you're going to want to do.

Source: Porsche
In this article: design, electric vehicle, EV, gadgetry, gadgets, gear, green, hands-on, porsche, porsche taycan, sports car, taycan, transportation
All products recommended by Engadget are selected by our editorial team, independent of our parent company. Some of our stories include affiliate links. If you buy something through one of these links, we may earn an affiliate commission.