Canon has unveiled the EOS 1DX Mark III DSLR, far and away its most advanced flagship camera to date. From the looks of all the technology (previewed earlier this year), it's a pretty strong comeback to criticism of its full-frame mirrorless cameras like the EOS R. It includes features like 16fps mechanical shooting speeds, advanced autofocus tracking, CFexpress card support, 5.5K 60fps video and a lot more.

It all starts with Canon's all-new 20.1-megapixel sensor that's designed for speed and reduced noise, along with a highly boosted Digic X processor. The sensor has a new lowpass filter that not only reduces moire but gives an "improved sense of resolution," according to Canon. It also has faster readout speeds to improve continuous shooting, which should reduce rolling shutter "jello" in photos and video.

Meanwhile, the processor delivers more speed for noise reduction and promises better lens optimization to account for distortion, etc. All told, the Digic X processor runs 3.1 times faster than the dual Digic 6+ processors on the 1DX Mark II, and can do other types of computing 380 times quicker.

Another new feature Canon teased earlier is 10-bit HEIF (high efficiency image file) image capture that can be used instead of (or along with) JPEGs. Those HDR files deliver more dynamic range and a wider color palette than JPEG, so they're easier to edit. At the same time, they're much more compact than RAW files.

The maximum normal ISO speed has been expanded one stop, giving the 1DX Mark III a range of ISO 100-102400 (expandable to ISO 50-819,200). More importantly, Canon has promised improved image quality in the ISO 6400-12800 range frequently used by news and sports photographers.

You'll be able to capture those images at up to 16 fps using the mechanical shutter, compared to 14 fps on the last model. At the same time, it packs a faster mirror drive mechanism that reduces the optical viewfinder blackout time when the mirror is flipped down.

In electronic shutter mode using the rear display, you can shoot at up to 20 frames per second with full autofocus tracking and auto exposure via Canon's Dual Pixel AF system. "When shooting sporting events (golf, etc.) where silence is essential, you can start burst shooting in advance to be sure of capturing the decisive moment," Canon added in its press release.

Sounds nice, but won't that jam up the buffer? No way, Canon said, thanks to the dual CFexpress 1.0 card slots. According to its tests using a 325GB CFexpress card, you'll be able to capture more than 1,000 RAW and JPEG shots at a time without filling the buffer, compared to just 81 shots on the 1DX II, which was one of the fastest DSLRs by far when it came out. (Current CFexpress cards can hit speeds up to around 1,500 MB/s. )

Canon has replaced the 1DX II's line-based AF sensor with a new square pixel, high-resolution AF sensor. For optical viewfinder (OVF) shooting, you get 191 AF points, including 155 cross points, compared to 61/41 AF/cross points on the last model. It offers improved face and head detection when you're using OVF, which should help sports and news shooters in the intended market. Canon also promised improved AF performance in poorly lit shooting venues like ice rinks. 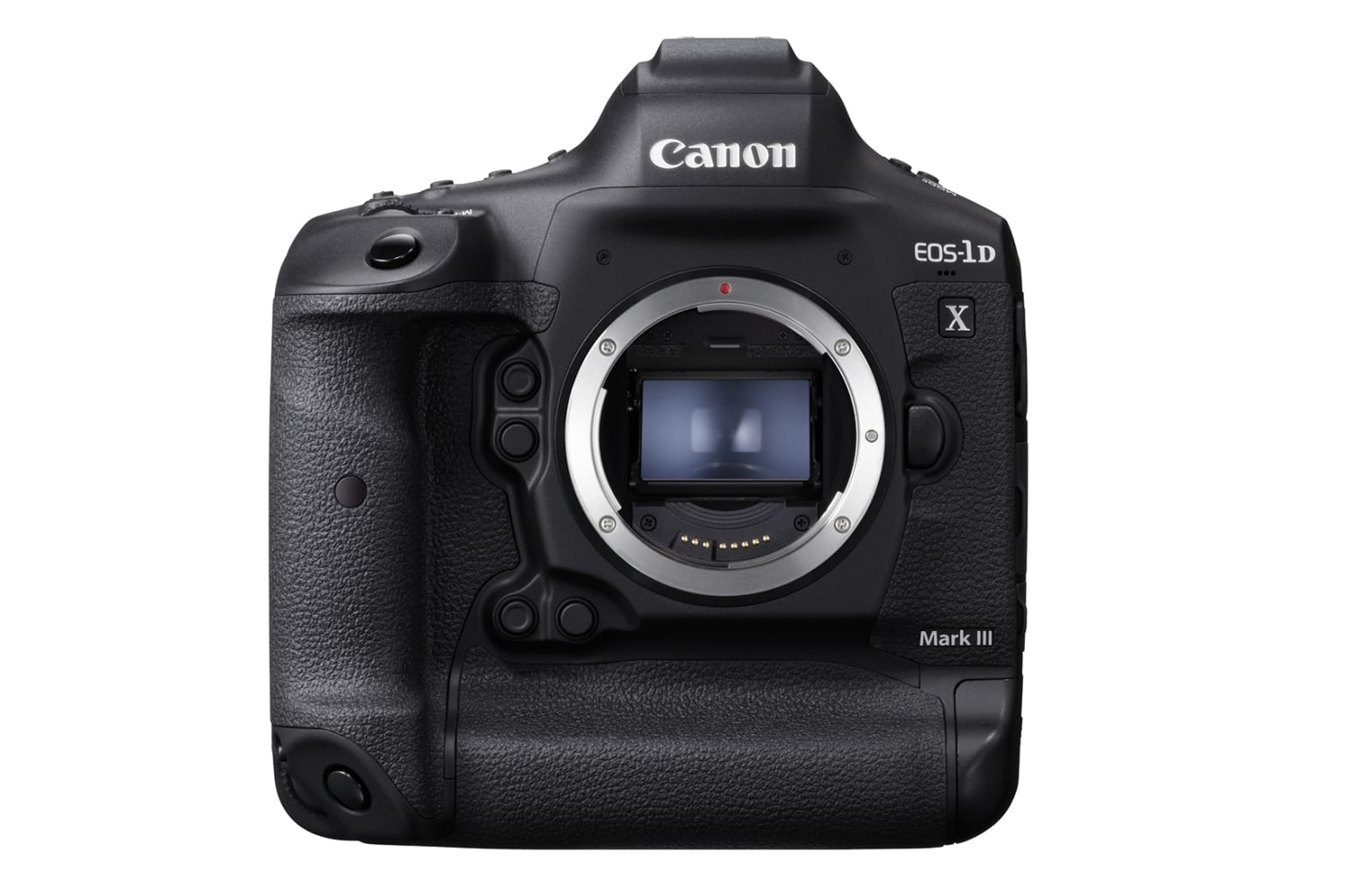 For live view shooting with Dual Pixel AF, the 1DX III sensor now covers 90 percent of the horizontal and 100 percent of the vertical frame, compared to 80 percent in both directions before. It also gives you finer AF area selection for both manual AF selection and face selection.

In both OVF and live view modes, Canon has improved human subject recognition and tracking performance through its latest deep learning algorithms. In live view mode, the AF will stay locked onto a subject's eye at the maximum 20 fps shooting speeds. "Even if the eyes are temporarily hidden, the camera will switch to tracking the subject's face, head or body," it said.

There's also a movie cropping caveat, but it's minor. When shooting 4K DCI, (4,096 x 2,160), the 1DX III uses the entire 5.5K sensor width and oversamples to 4K DCI size. However, there's a slight crop on oversampled 4K UHD video (3,840 x 2,160) of about 256 pixels on each side, so you'll get around a 5K image (not 5.5K) that's oversampled down to UHD. Overall, however, the video performance on this camera looks pretty stunning, even compared to Canon's pro C-series video cameras.

While the 1DX Mark III looks to have video specs nearly on par with Panasonic's S1H, it lacks the ability to "jam sync" timecode from other cameras. As such, it might not meet production approval from certain broadcasters or streamers including Netflix. 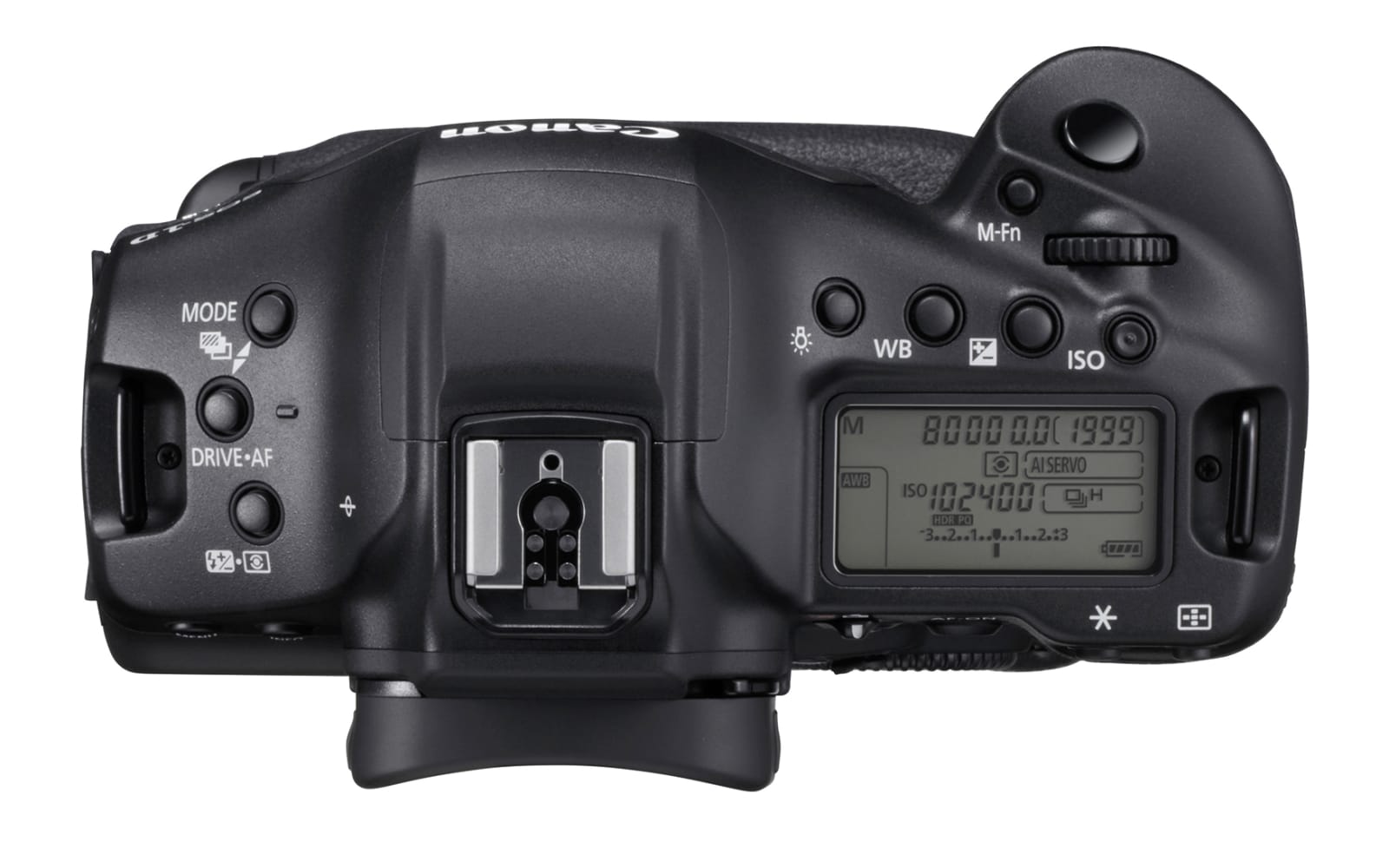 Canon has fully unleashed its Dual Pixel AF for video shooting for the first time, as it supports eye, face and head detection, along with the usual zone and spot AF -- with no cropping. Plus, it has a movie servo AF that you can customize to control focus speeds and more. Given how well Dual Pixel works on other Canon cameras, the 1DX Mark III should be one of the best cameras out there for video, by far.

On the connection side, it packs a USB 3.1 Gen 2 port, wireless transfers via the optional WFT-E9 transmitter, gigabit Ethernet and built-in WiFi, Bluetooth and GPS. You also get built-in microphone and headphone ports.

There are numerous other features including illuminated buttons, a new magnesium allow body with improved dust-, moisture- and shock-resistance and a 90-gram-lighter weight of 1,440 grams, to boot. Canon offers 5-axis electronic (not mechanical) image stabilization for movies and improved touch control.

The 1DX Mark II doesn't come cheap, but so far, it looks like a powerful beast, whether you're into photos or video. Some shooters might be disappointed that it doesn't have more resolution than the last model, but a camera like this is more about the speed. It'll start to arrive in stores in mid-February 2020 for $6,500 (body only) and should become an instant buy for pro shooters, especially those who already have Canon glass. In addition, if you place a pre-order, you'll get a free 64GB CFexpress card and card reader valued at $200.