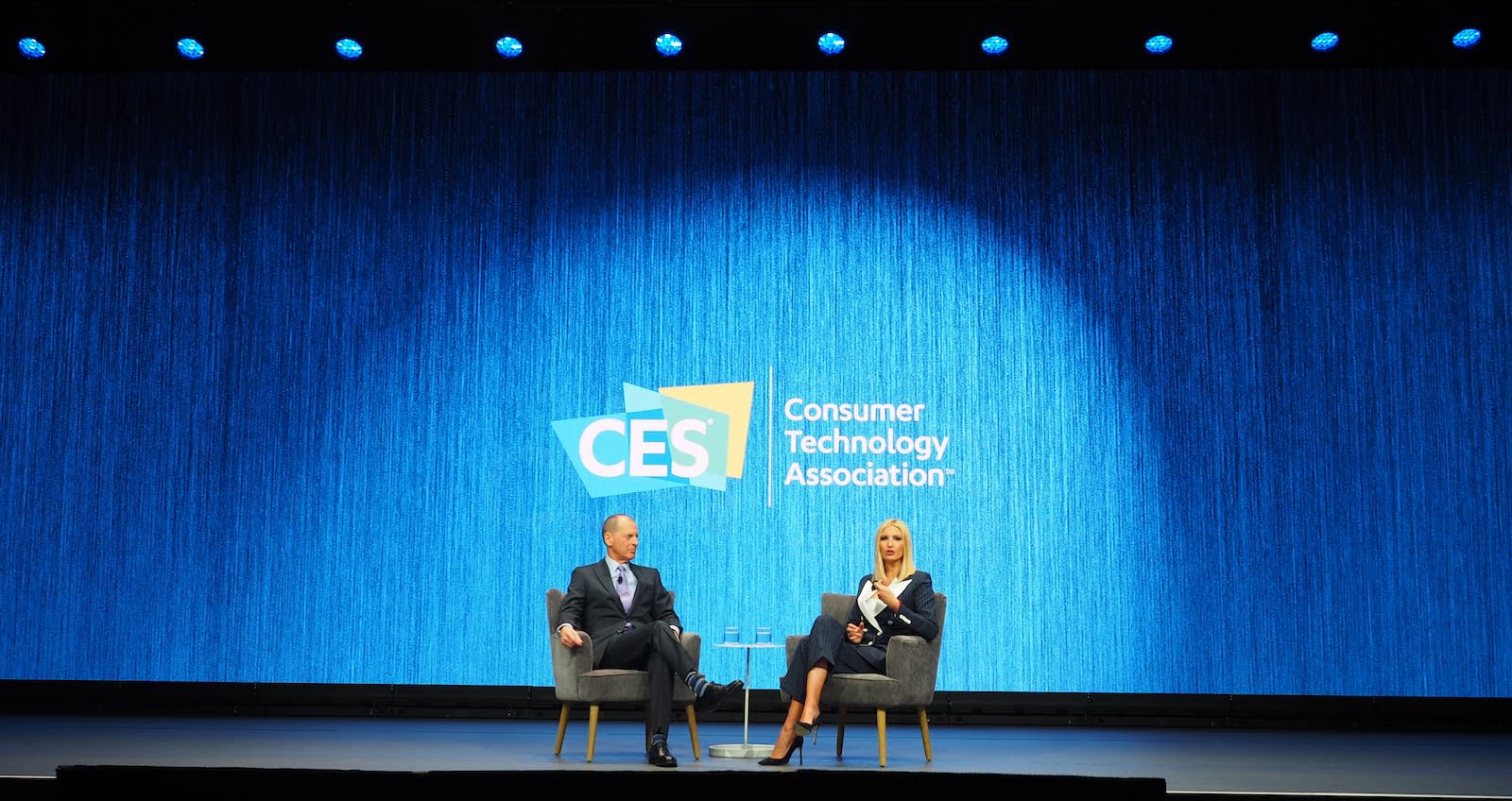 Ivanka Trump disrupted the conversation about women in tech

While saying nothing about them.

Decades of CES speaker pages and Las Vegas ballroom stages have been populated by men, some years exclusively.

In 2018, CES ended up with an all-male keynote roster for the second year in a row, and the CTA faced so much backlash from tech leaders and equality groups that organizers added two female panelists at the last minute.

But at CES 2020, the Consumer Technology Association is catching shade for inviting a woman to deliver a keynote address. A particular woman: Ivanka Trump, advisor to President Donald Trump. The criticism is grounded in surprise and confusion -- after all, Trump doesn't have direct ties to the technology industry. If her keynote session is an attempt to include female tech leaders in CES, organizers have missed the mark.

Trump was interviewed on stage by CTA chief Gary Shapiro yesterday in a talk titled, "The Path to the Future of Work." They discussed job creation, apprenticeship programs and skills training in the United States, tying it all back to Trump's role as co-chair of the National Council for the American Worker.

Of course, Trump's position as a policy influencer makes the keynote feel distinctly political, not just ill-suited. It's presidential election season in the United States, following half a decade of exponentially divisive, at times violent, disagreements between conservative and liberal voters. Political tensions are higher than they've been in a decade, and any mention of "Trump" -- Ivanka, Donald or otherwise -- can spark heated emotions in an instant. In this climate, the CTA's invitation to Trump feels like a pointed message.

Many business leaders in the technology sector blasted the CTA's decision to host Trump long before she took the stage. On the tweet announcing her appearance this year, responses ranged from surprise to full-on trip cancelations. Female tech workers were particularly vocal, offering suggestions of other, ostensibly more qualified, women who submitted panels and speaker proposals, but were rejected by the CTA.

One of these women was Heather Delaney, a startup mentor and founder of consulting agency Gallium Ventures.

"I simply don't understand why CES has made the decision to have Ivanka speaking at the show instead of the many women who have built their careers in the technology industry," Delaney told Engadget. "It's incredibly disappointing CES hasn't taken keynote speakers from its exceptional pool of women in tech, who fully understand the future of work within the industry."

Delaney pitched a panel for CES 2020 highlighting female founders and technology companies building products for women. The CTA rejected it and didn't provide a reason.

"Innovation is a net job producer. Jobs will be created in industries that don't even exist today because of innovation," Trump said during her keynote. 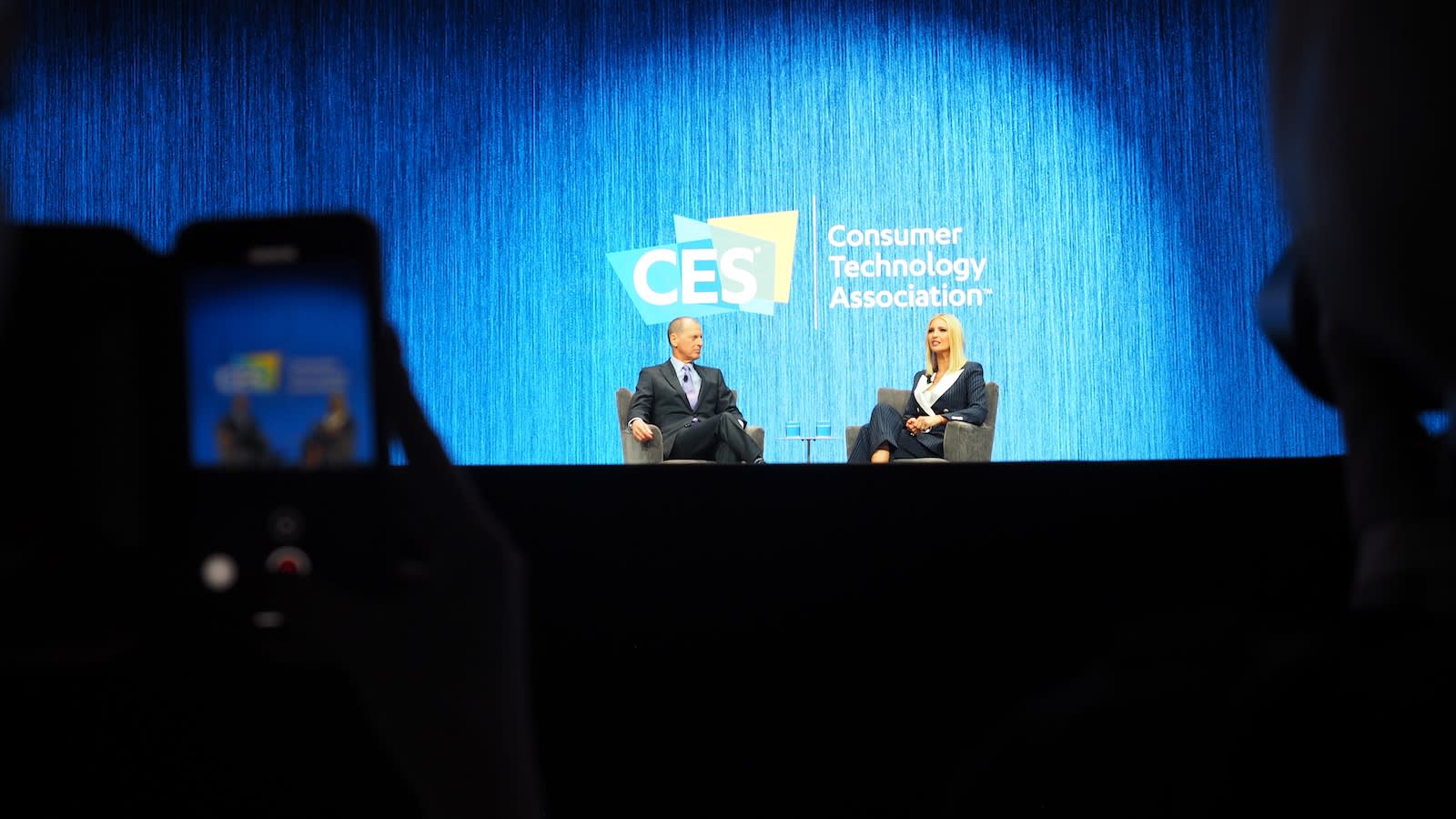 "There were many overly qualified women working in technology who also had their talks turned down," Delaney said. "Although, yes, Ivanka is a woman, it was disappointing to hear CES had decided to bring in a female speaker who has limited links to the industry compared to many of those wanting to discuss upcoming developments in software, AI, wearable technology and even sex tech."

"There were many overly qualified women working in technology who also had their talks turned down."
- Heather Delaney

Sex tech is intrinsically tied to the fight for gender equality at CES. At last year's show, the Osé -- a female-focused, hands-free orgasm device from startup Lora DiCarlo -- won a CES Innovation Award. And then the CTA revoked that honor, arguing the Osé was disqualified from consideration because it was "immoral, obscene, indecent, profane or not in keeping with CTA's image." Meanwhile, the CTA allowed a VR porn exhibit from Naughty America to set up in one of CES' main halls, and the show has historically featured sex robots including RealDoll and Solana. The main difference between Osé and these items, Lora DiCarlo founder Lora Haddock argued, was their intended market. Gadgets designed for women's health and pleasure were categorized as "immoral," while those for men were acceptable.

Haddock's disagreement with the CTA went viral and kickstarted a public debate about gender bias in the technology industry. Eventually, the CTA reversed its decision and re-granted the Osé its Innovation Award.

"CTA did not handle this award properly," read a statement from the organization. "This prompted some important conversations internally and with external advisors, and we look forward to taking these learnings to continue to improve the show."

The CTA opened up CES 2020 to sex tech companies on a one-year trial basis. This move gave tech and business consultant Cindy Gallop hope that CES would accept her talk, "Why Sex Tech Is the Next Trillion Dollar Category in Tech."

The CTA turned her down.

For years, CES has rejected speaker pitches from women on the basis that their talks didn't focus enough on tech, their credentials in the industry were too thin, they didn't meet the rigid requirements set by the CTA. Gallop's name has been brought up multiple times as a clearly missed opportunity for a qualified, female tech leader to speak at the show.

"CES' response to criticism of their lack of female keynote speakers historically has been that their standards are extremely rigorous, that they simply haven't been able to find women who deliver the same level of technological seniority, experience, credibility and gravitas as the many white men who populate their speaking stage," Gallop said. "And that they have no intention of putting any woman on stage who does not live up to their extremely high standards regarding a demonstrably, highly impressive track record in tech and business."

And then the CTA invited Ivanka Trump, a person with no direct ties to the industry, to CES to talk about jobs, a category that's only tangentially aligned with the show's goals. Around halfway through a circuitous response to a question about internship programs, Trump said, "I view most manufacturing as high-tech manufacturing these days. In America, manufacturing is high-tech manufacturing. Actually if you talk to a lot of manufacturers, they get very upset with Silicon Valley because they say, 'Hey, we're the original high tech.'"

For many female tech leaders who have tried for years to earn a speaking spot at CES, it all feels like hypocrisy.

Here's the CTA's full statement defending its decision to invite Trump to CES:

CES welcomes the world to Las Vegas to celebrate innovation. Policy discussions are a critical part of CES, and we will host almost 200 policymakers from around the world. CTA invites officials from every White House – both Republicans and Democrats – to participate in and speak at CES. The future of work is a critical policy topic for the technology sector. Life-changing tech innovations – from artificial intelligence to drones to self-driving vehicles – will create countless new jobs, and our industry has a responsibility to prepare American workers for the jobs of the future. Advisor to the President Ivanka Trump leads the White House efforts on job creation and economic growth through workforce development, skills training and entrepreneurship – and she will address them directly at CES 2020. She successfully spearheaded the effort to get major companies to commit to reskilling American workers for new jobs.

For many women in the tech sector, this justification isn't enough.

Cindy Chin is the founder of Women on the Block, a group that advocates for women in technology. She told The Guardian last week, "It would be better if the background of the keynote speaker actually fit the industry it is serving and inspirational, rather than talking heads and political."

Most years, the CTA comes under fire for excluding women from its keynote lineups at CES. This year, CES is hosting 15 keynote speakers, and five are women. However, the decision to invite Trump to the show has ensured the conversation focuses on just one.