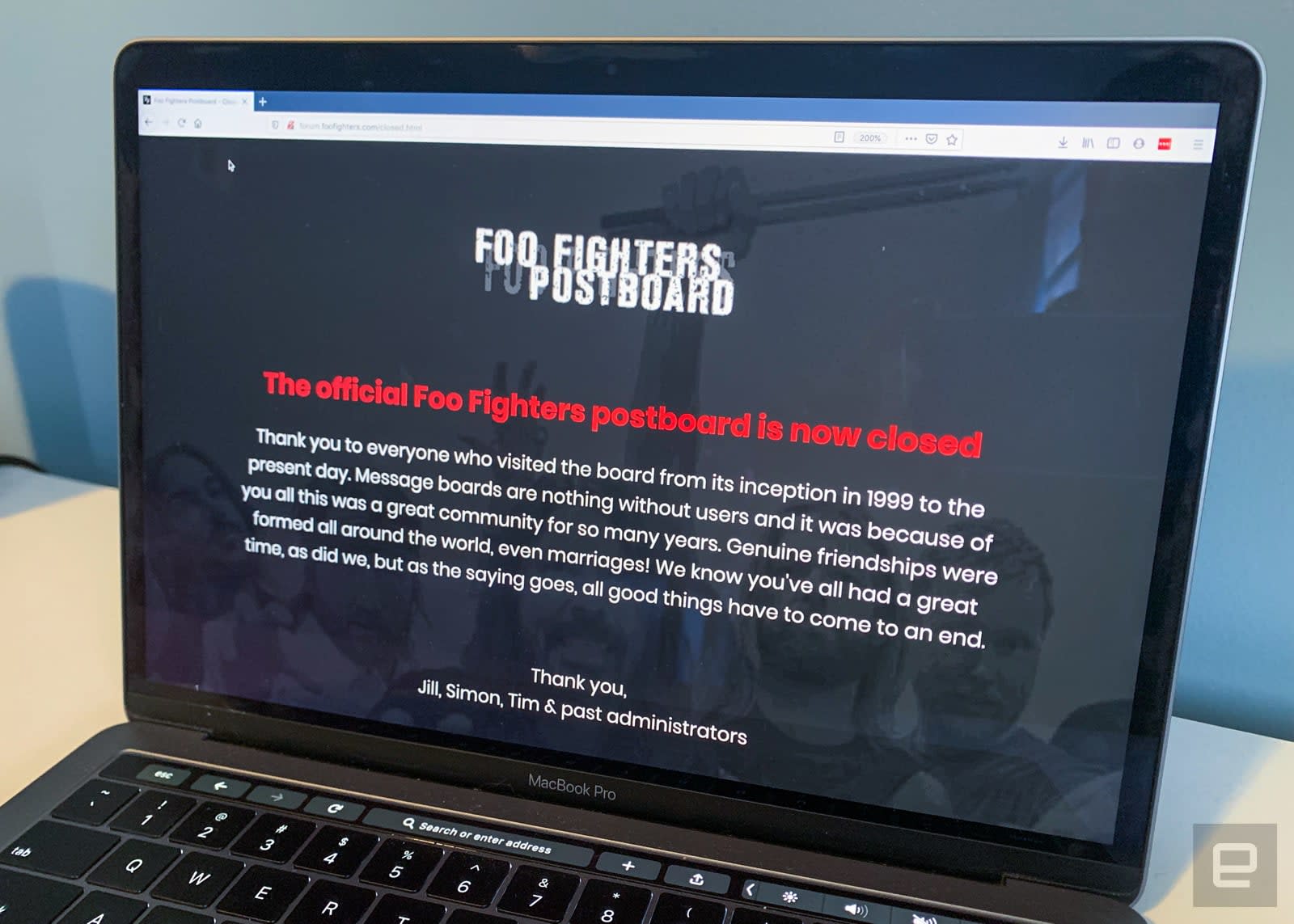 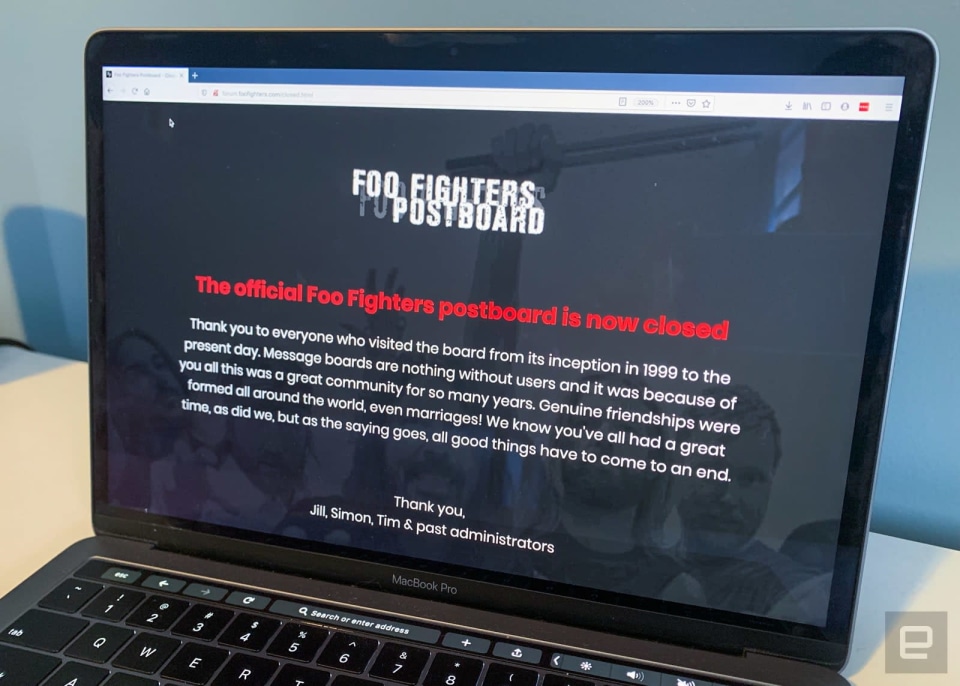 Before social networks took over the internet, message boards were perhaps the most essential way for people to come together online and talk about whatever was on their minds. Our discussion spaces have evolved dramatically, though -- message boards aren't as important as they used to be, thanks to the decade-long onslaught of Twitter, Facebook, Reddit and more. Many formerly prominent destinations are closing up shop, including the message board I called my online home for well over a decade.

IRC was before my time, and I started using the web a few years before social media changed the game, so message boards were where I found my tribe. I frequented a few but spent the vast majority of my time on the official Foo Fighters postboard (the FFPB, as it was known). After 20 years, all that remains is an earnest thanks-for-the-memories message.

A stadium rock band brought us to the virtual dancefloor and the weird, lovely community kept us there. I hadn't been a regular since about 2013, but once I learned in mid-January that it was closing at the end of that month, I hopped back in and enjoyed reminiscing.

In my youth, it was a place where I explored ideas and sought out advice. I found out about new music and films. I heard from different perspectives and learned about the political realities of people who lived in places I'd only heard of in the news. I'll never forget the running jokes, the marriages and the dramatic interpretation of various song lyrics. Most important of all were the people, none more significant than the person who has been my partner for 12 years now.

Of course, it wasn't all sunshine and roses — there was plenty of personal drama and heated arguments, not to mention more sinister incidents, like members faking their own deaths. Even semi-private safe spaces on the internet will lure their share of jerks.

The FFPB afforded me and many others a safe online space while we came of age. I visited every day for a decade and posted 12,178 times from an account that still somehow bore my MSN Messenger address in 2020. Many of the friendships forged there migrated elsewhere long before its demise -- to private IM chats, email, phone, the real world and, yes, social networks. The rise of those platforms essentially spelled the end of the FFPB, though a moderator also mentioned that the board couldn't comply with GDRP regulations. That could be a difficult obstacle for many of the web's other long-standing communities to overcome.

Of course, it's far from the only once-popular message board to perish. Sony, for example, is shutting down its official PlayStation Forums today, February 27th. For many years, it's been a helpful resource for gamers from far and wide to troubleshoot issues with their console or PlayStation services, not to mention a place for players to discuss games with their peers. Sony hopes the conversation will move to Facebook, Twitter and comment sections of PlayStation Blog posts. Perhaps the community will reassemble on another message board; it could be hard otherwise to keep the essence of what makes forum-based communities special.

Facebook and Twitter aren't as effective for keeping up with multiple discussions over an extended time frame. Reddit is a relative of traditional forums, but you won't see threads that stay active for over a decade or any that have a pulse longer than a day or two on busier subreddits. You can't exactly bump a thread to resuscitate it there either.

One key thing Reddit does have in common with message boards is the importance of moderators. There were only a few of them steering the FFPB ship. They were terrific and pretty lenient, as long as you weren't a total jerk. They were vital guiding lights for that postboard, and they made sure it felt like arriving home every time I logged in.

That's not to say you can't find your community on social media, though. Many, many folks have. Facebook Groups, for one thing, are thriving. Effective moderation can keep everyone in check there too, and place a lid on the toxicity that plagues the public side of the internet. "Often, what you actually want is an authoritative stranger, responding to your specific query, speaking from their experience, but with no strings attached, no connections, no fear of seeing them in the grocery store and them asking if you took their advice," Anne Helen Petersen wrote for BuzzFeed News last year. "The opposite, in other words, of the rest of the Facebook feed."

I've been pondering what it might have been like to grow up on the internet if I were a teenager in 2020 and hadn't found my village. I might have been sucked even deeper into the unmoderated chaos of social platforms, where there's an unspoken expectation to act performatively instead of as our authentic selves.

Without adequate moderation or stringent enough rules, it's all too evident that bad actors poison the well, sow division and spread misinformation. Those lead people to have ideologies and perspectives that are harmful to society. I'm all for free speech, but we'd still all be better off with reasonable moderators refusing to let people be dicks.

In any case, my brain jives best with the order and structure of well-moderated message boards. They'll still be around for a long time to some degree, because many folks like me still prefer them to social platforms. They're simply the best spaces for niche discussion groups that blossom into fully-formed communities.

The FFPB may be gone, but all is not lost: one of the moderators has set up an unofficial postboard for the remaining members. I'm really glad that the community will stick together in some form, and I have my fingers crossed others who found a safe space on message boards can keep theirs together too, including those PlayStation Forums members. If they can follow the example of the FFPB and move to a new forum, where they have to write out a response instead of half-heartedly clicking a like button, I bet the community will continue to flourish. It just won't be as visible as it used to be.

In this article: communication, editorial, entertainment, foo fighters, forums, internet, message boards, playstation forums, social media
All products recommended by Engadget are selected by our editorial team, independent of our parent company. Some of our stories include affiliate links. If you buy something through one of these links, we may earn an affiliate commission.