'Fuser' is 'Rock Band' and 'DropMix' without the expensive clutter

It borrows their best mechanics and leaves the accessories behind.

10 years ago you'd be forgiven for calling Harmonix "the Rock Band guys," because there was a three-year span where that's all the developer produced. And for the past few years Harmonix has gone all in on VR, with titles like Audica and uh, Rock Band VR. There was one notable diversion in that time, a card-based mobile game called DropMix where you mixed up musical tracks using NFC-enabled cards. But that never really took off. However, the mechanics introduced in it do live in again in Harmonix's upcoming multiplatform game, Fuser.

Fuser, which was announced just last week and demoed at this year's PAX East, places you in the role of a festival DJ, spinning records to please the crowd and thus earn points. It's far from the first DJ music game — it was Konami's Beatmania that kicked off the whole rhythm game trend back in the '90s, and Activision followed suit with DJ Hero a decade later. But Fuser is Harmonix's first swing at the mechanic on a console and, based on the demo I played at PAX, it has the potential to be a hit. Especially since it doesn't require a special controller to play — something that plagued every DJ game I've mentioned so far. 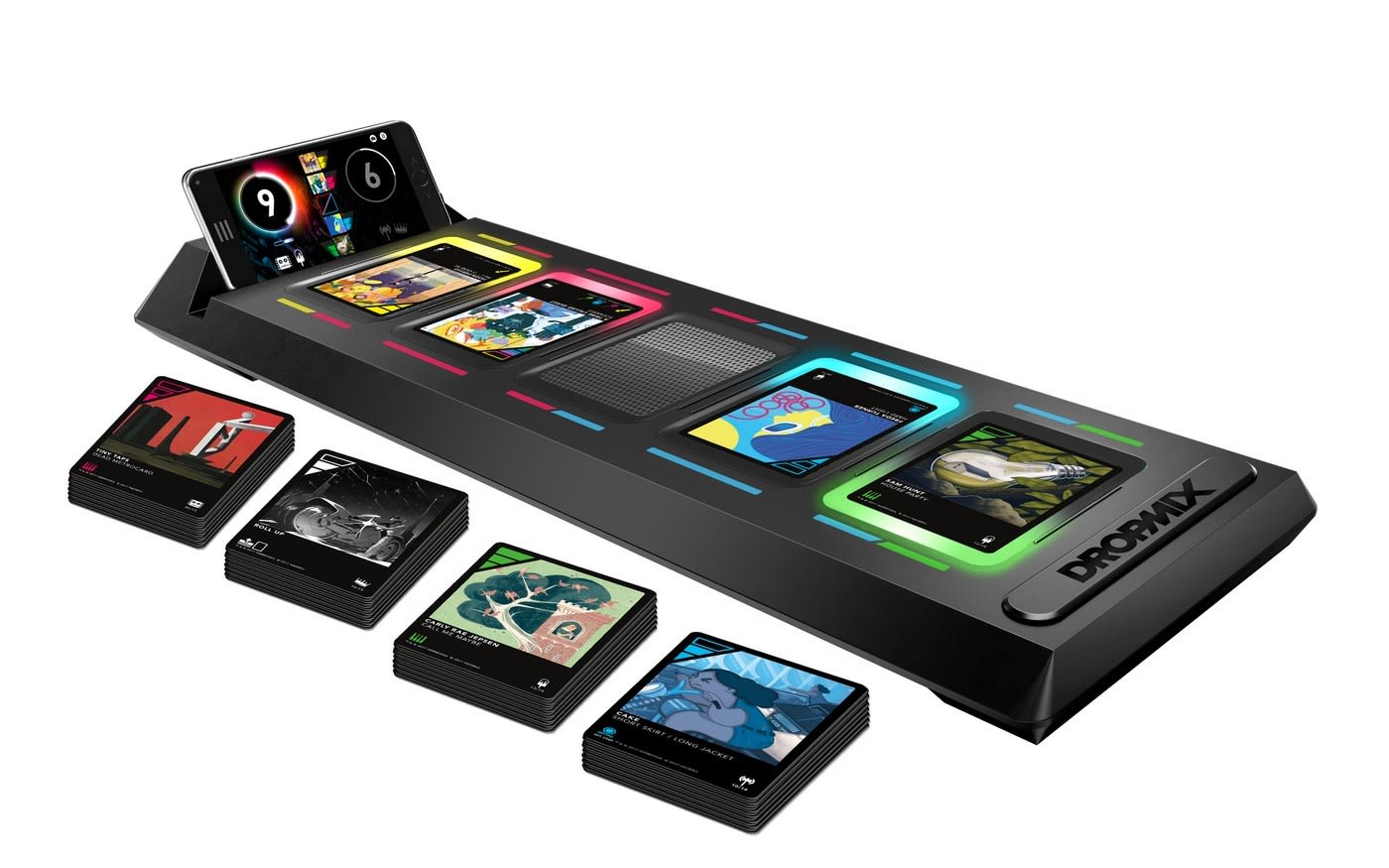 The accessories were a big part of why DropMix never took off. It was a mobile game for Android and iOS, but it required a giant NFC reader board to play, one that cost $100 when the game launched back in 2017. That starter set included 60 NFC-chipped cards to play with, but additional card packs ranged from $6 to $15. It was not a cheap game to enjoy.

Which is a shame, because the game was a lot of fun to play. Each card represents part of a song, like the percussion from Imagine Dragons' "Radioactive" or the vocals from Meghan Trainor's "All About That Bass." When placed on the board, that part of the song was activated in the app. The software was quite good at blending and beat-matching everything you could throw at it, which is what impressed me when I first tried out DropMix three years ago. There was an actual card game in there, yes, but a lot of the time I've found myself just pulling the board out to mess around with beats. 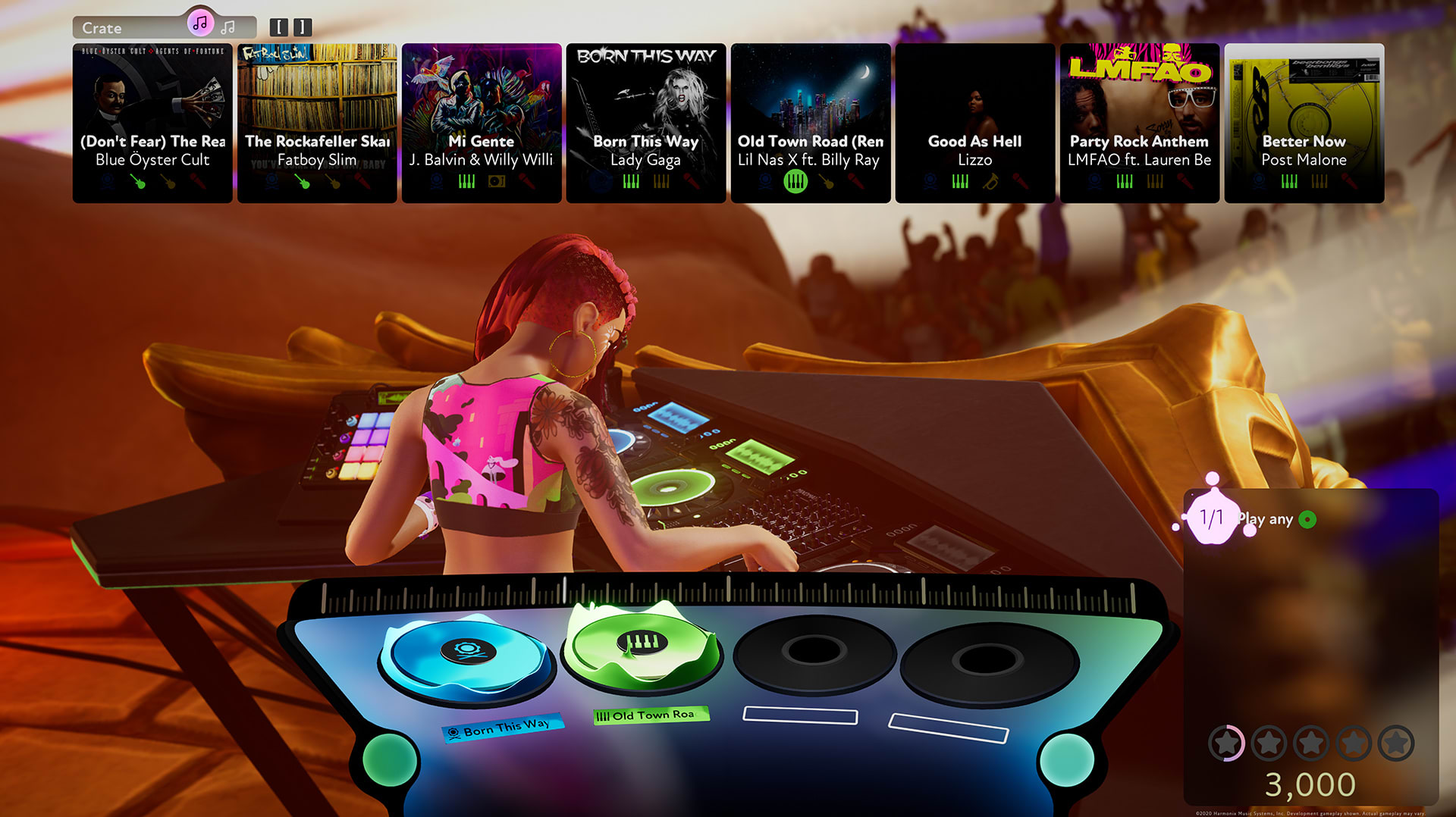 Elements of DropMix are instantly recognizable in Fuser. The songs are separated into the same sections, like rhythm and bass, even using the exact same icons and colors. But the card game mechanics are gone, with the gameplay focused firmly on creating a good mix. And the challenge has been ramped up here; while DropMix would seamlessly blend the songs into each other, Fuser expects the player to drop the new tracks on the downbeat themselves, rewarding them with extra points for a smooth transition. Audience members will throw specific requests at you, like play a pop song or a track from the '80s, and it's up to the player to dig through their record case to find and drop it into the mix before the crowd gets annoyed.

The "matching requests" part isn't new to Fuser — DropMix had something similar, but it was more about matching symbols and colors than the songs themselves. Fuser expects you to remember the details of the tracks you have at hand, namely what instruments are present and when the songs were released. This could get tricky if you have a large inventory, but it looks like you might be able to customize your playlists for an optimal mix of tracks, much like building a Magic: The Gathering deck.

One thing I missed while playing Fuser was tactility; selecting tracks is handled by moving the cursor (via the left thumbstick) over the song you want to use at the top of the screen and pressing one of the four buttons on the gamepad to select which part you want to use. Then you drop it on the turntable with the thumbstick again. On an Xbox controller, it's a little more intuitive because the button colors actually match the tracks; on PS4 and Switch you'll have to remember which button is which by position alone. You scroll through the tracks in your inventory via the shoulder buttons.

It's a pretty standard scheme control-wise and, as stated earlier, there's no special controller to buy, which should keep costs down (before the inevitable DLC packs). But I found myself wishing I could flip through the records and drag them onto the turntables with my fingers instead. It just feels like it could be easily adapted to a touch interface, which would make it more accessible to casual players (maybe if there's ever an iPad release). 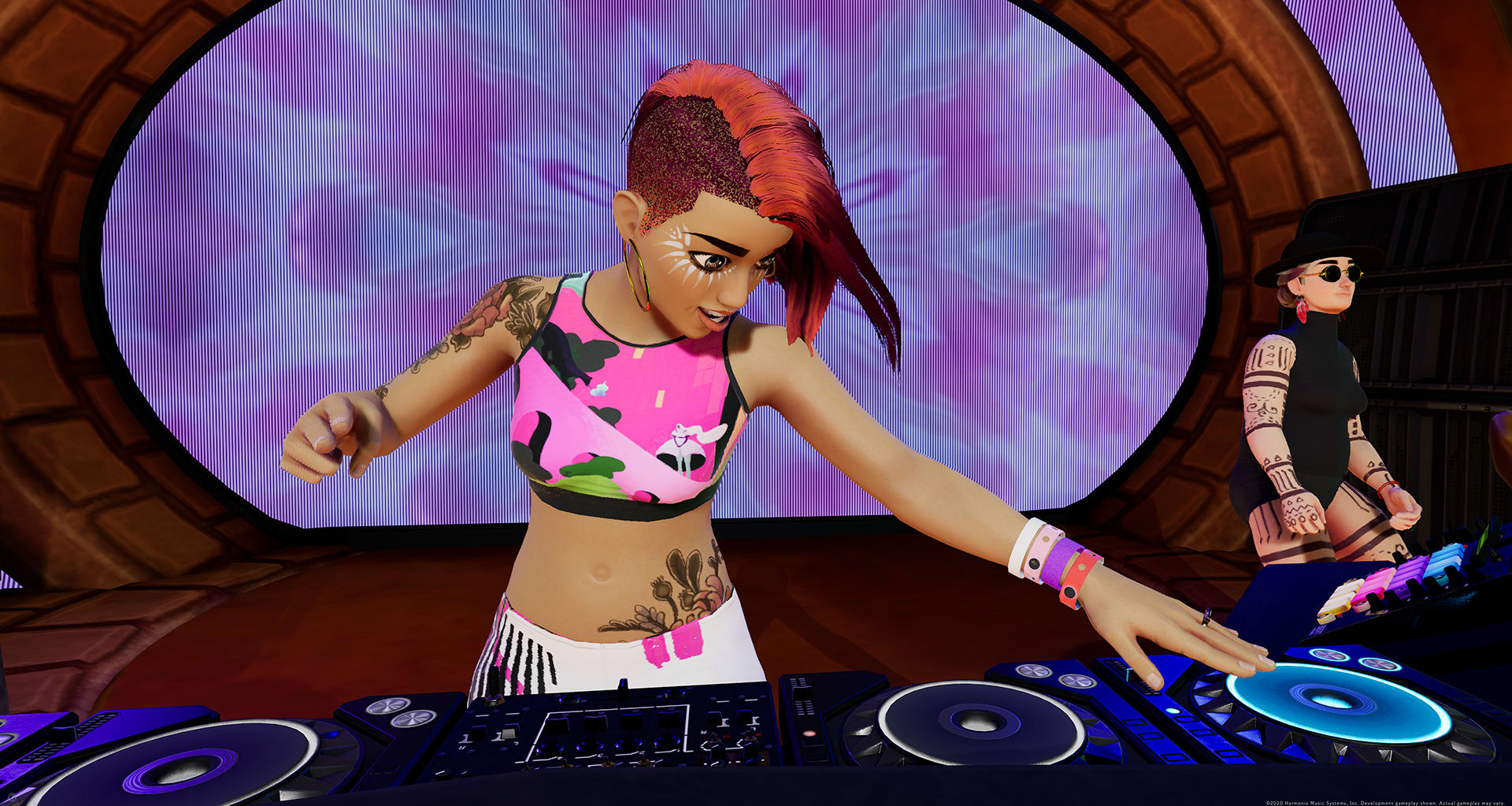 The other thing I missed about DropMix was the original art on each card; in Fuser the songs are represented by their real album art. It's... fine. But the DropMix art was both gorgeous and unifying, creating a seamless aesthetic between the board, cards and app. The album art just looked out of place among the cartoonish DJ characters, bright colors and clean iconography in Fuser.

Fuser was a lot of fun and I'm excited to see it on Switch, but I can't help feel a pang of sadness too. This pretty much means another nail in the coffin for DropMix, which is still releasing new "playlist" card sets (and you can buy the board for only $30 now). However, the packaging always warned that the app was only guaranteed to be available through December 31, 2019. As we're now two months past that, I'm ready to say goodbye. I just hope that Fuser embraces its freaky side like DropMix did, and I get to fuse tracks like the Doctor Who theme and Edgar Allen Poe's "The Raven" when the game is released this fall.

All products recommended by Engadget are selected by our editorial team, independent of our parent company. Some of our stories include affiliate links. If you buy something through one of these links, we may earn an affiliate commission. All prices are correct at the time of publishing.
'Fuser' is 'Rock Band' and 'DropMix' without the expensive clutter
av
dropmix
fuser
gaming
harmonix
music
music game
pax east
ps4
switch
xbox one