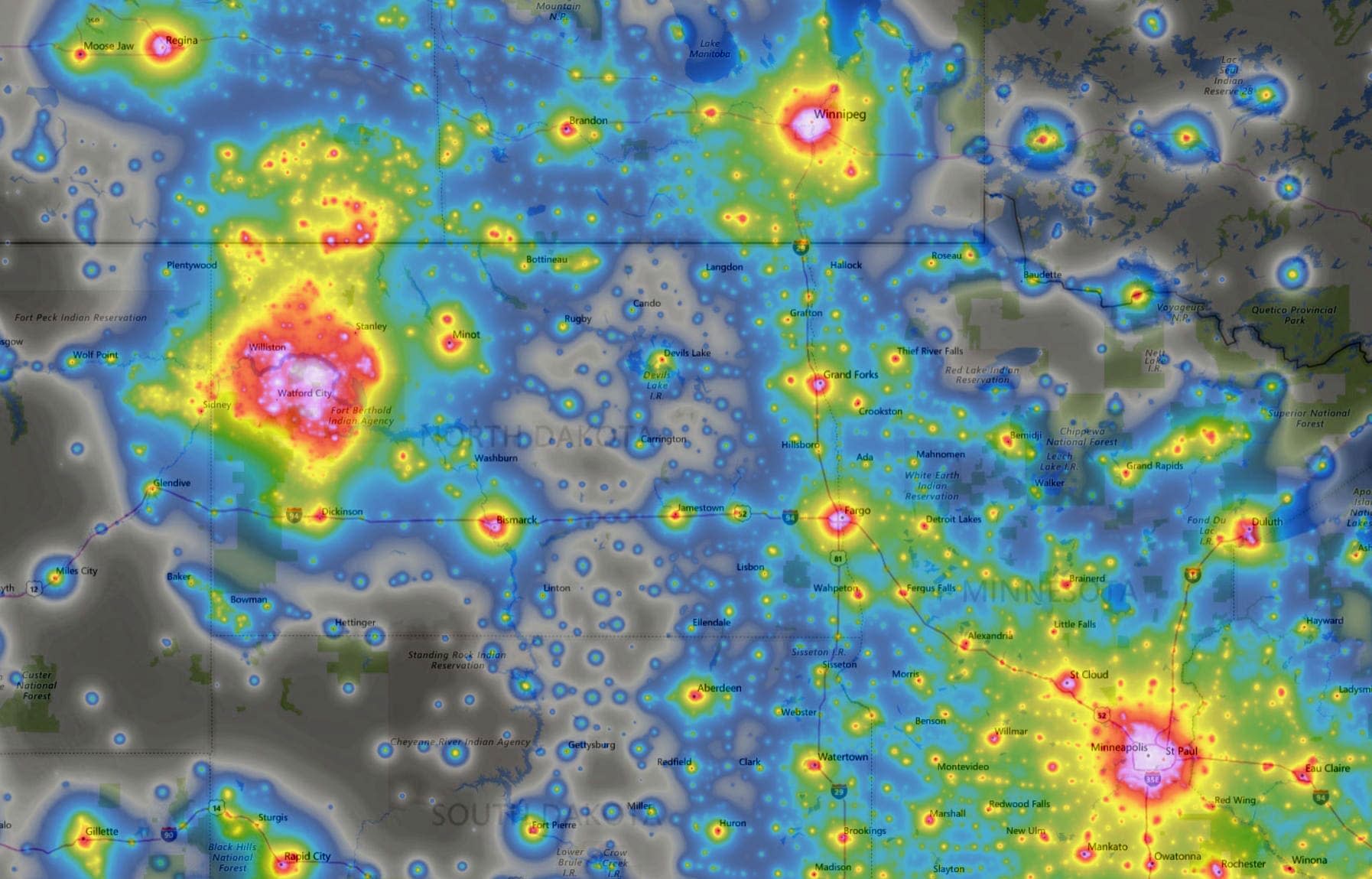 Light pollution is the bane of stargazers, which is why you need to get out of the city to make the best use of your telescope. However, even in the middle of nowhere, your observations might still be disrupted by stray light sources. That prompted a budding astronomer, Alex Altair, to investigate exactly what was producing US light pollution in places with nary a city or town in sight.

Altair tried to find the best observation spots by tapping the Light Pollution Map created by Jurij Stare, with data sourced from NASA's Visible Infrared Imaging Radiometer Suite (VIIRS) and the NOAA's Defense Meteorological Satellite Program (DMSP). That led him to wonder where a lot of stray light pollution was coming from in spots with no signs of urban development.

"Of course, the vast majority of light pollution is from cities: street lights, industrial zones, parking lots," he wrote. "But sometimes, it's from something else." To start with, he searched his home state of Maine and found an enormous light pollution source with seemingly nothing around it. After using Google maps to zoom in, he spotted a massive hothouse complex. "This greenhouse augments its growing season with an enormous array of yellow lamps," he wrote. "And this makes it the single greatest source of light pollution in the entire state."

He also spotted what looks on the map like one of the largest sources of light pollution in America, smack in the middle of... North Dakota? After tracking down the blotchy feature on Google Maps with a satellite overlay, all he found at first was "an intense lack of urbanization."

By zooming in further on Maps, he was able to solve the mystery -- it turned out to be a large oil field area. Next to the swiveling pumpjack wells are deliberately set gas flares that convert methane into CO2 to reduce (but of course not eliminate) dangerous greenhouse gases. Those produce a light pollution source that is highly visible to the VIIRS infrared cameras.

Scanning through Google Maps in the same area myself, I noticed that these pumping stations are literally everywhere in the area. That helps explain the shape of the light pollution source and why there's so much of it. Altair also spotted similar oil wells dotting the landscapes and generating light pollution (and regular pollution) in Texas and the Gulf of Mexico.

Not all light pollution is man-made, as Altair also spotted a source in Hawaii caused by an active volcano, Kilauea. As he points out, such maps are a useful tool not just for astronomers, but as a way to track wildfires or even estimate a country's GDP. Best of all, this huge wealth of mapping data is available to all, letting average people become detectives, archaeologists and spies.

In this article: Alex Altair, gear, light pollution, North Dakota, oil drilling, space, The Big Picture, thebigpicture, thenewbigpicture
All products recommended by Engadget are selected by our editorial team, independent of our parent company. Some of our stories include affiliate links. If you buy something through one of these links, we may earn an affiliate commission.