HMD Global is jumping into the 5G wars. The Finnish company, which has been making Nokia-branded smartphones since 2016, claims to have made "the first global flagship smartphone to date." What on earth does that mean? Well, by "global," the company is referring to all of the 5G networks currently in operation around the world. Unlike most Android flagships, which have scattershot support and compatibility, the new Nokia 8.3 5G should be a roaming powerhouse that works everywhere, and on every network. According to HMD Global, the phone will also be forward compatible with 5G technology "deployed later in 2020, and onwards."

"We are supporting the highest number of 5G new radio bands, by far, that you've ever seen in a single design, to date," Juho Sarvikas, chief product officer at HMD Global boasted. It's a big claim that we'll have to verify ourselves. If the company can deliver, though, it could make the phone a tempting choice for business folk and anyone else who travels frequently.

The phone uses a Snapdragon 765G processor and is the first, according to Sarvikas, to ship with Qualcomm's 5G RF (radio frequency) front end module. "With this solution, we have 40 RF components condensed into a single integrated module, and it gives the 8.3 5G the best industry-leading performance on the Qualcomm Snapdragon 765G platform," he said. 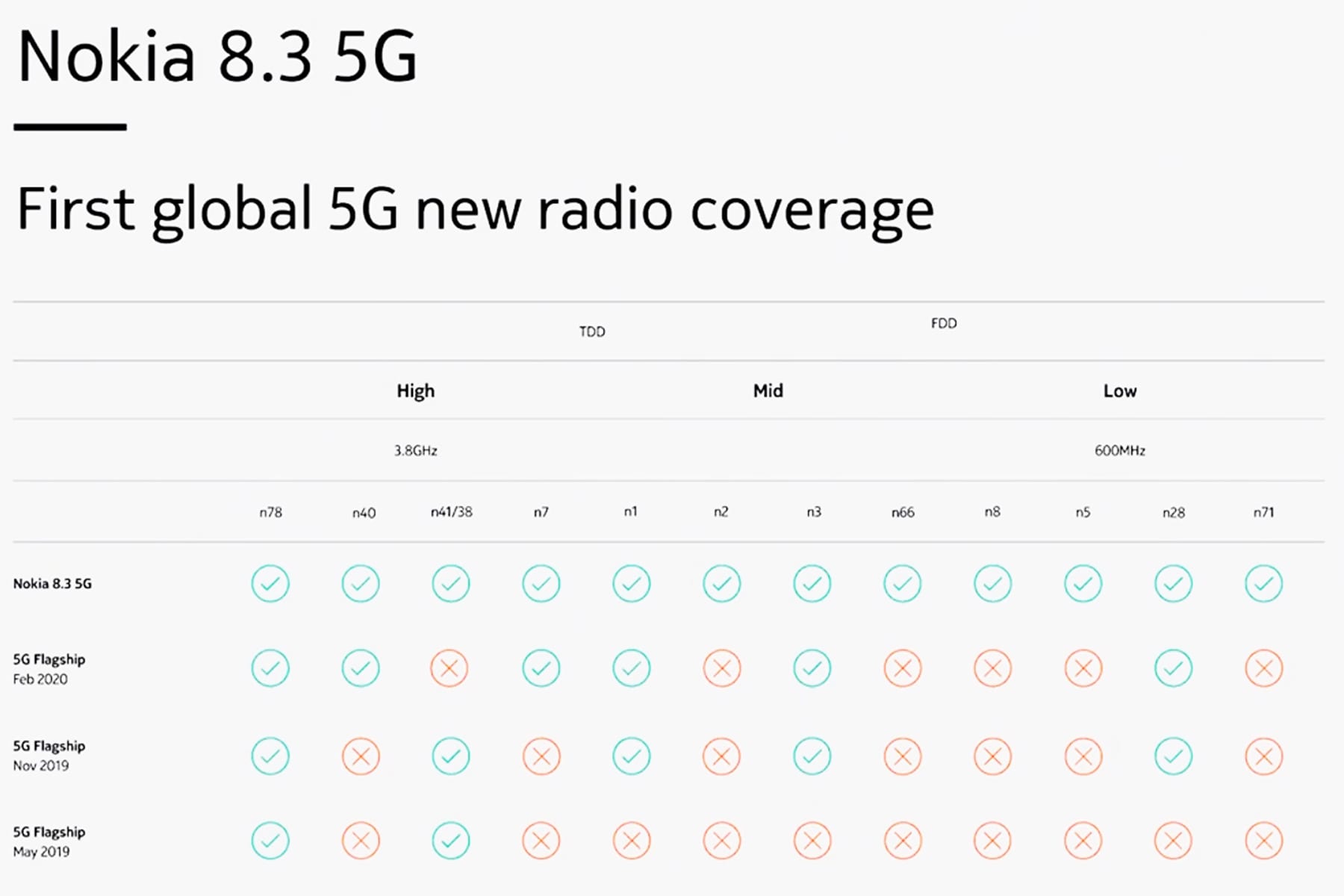 A breakdown of the 5G bands that the phone supports.

Depending on your budget, the phone will come with either 6GB of RAM and 64GB of storage, or 8GB of RAM and 128GB of storage. Both configurations will have a microSD slot that supports up to 400GB cards, too. Taking center stage is a 6.81-inch PureDisplay -- a marketing term that promises higher contrast and clarity, as well as HDR10 support -- with a 20:9 aspect ratio and hole-punch notch in the top left-hand corner. As far as we know, it's not a high refresh rate panel like the Samsung Galaxy S20 line or Oppo's newly-announced Find X2 Pro. The device also sports HMD's now-standard chin design that includes a small but noticeable Nokia logo.

HMD, like the Pixel line, prides itself on delivering a clean Android experience. Like past Nokia-branded handsets, you won't find the app drawer cluttered with annoying bloatware (we're looking at you, Moto Razr). As usual, HMD has also promised at least two years of Android upgrades -- so it will definitely get Android 11, which is now available as a developer preview -- and three years of monthly security upgrades. The phone also has a dedicated Google Assistant button, a side-mounted power button with integrated fingerprint sensor, and biometric face unlock.

The smartphone maker is also keen to tout the camera system in the Nokia 8.3 5G. Visually, it's more pedestrian than the insect-like Nokia 9 PureView, which had a whopping seven holes etched into its rear-side. The 8.3 5G has a small circular bump that contains a 64-megapixel primary shooter with Zeiss optics, a 2-megapixel macro and 2-megapixel depth-sensing camera. It also offers a 12-megapixel ultrawide that uses larger pixels -- 2.8μm super pixels, to be precise -- that can capture 4K video in lowlight conditions.

The camera app will have a special Action Cam Mode that combines 60 frames per second footage with "gimbal-like image stabilisation." HMD is also promising something called Zeiss Cinematic Capture, which lets you shoot and edit in a Hollywood-style 21:9 format with "true cinematic color style." It will also try to simulate anamorphic lenses and lens flares that J.J. Abrams would be proud of. You can also shoot everything in Log format, if you would rather color correct everything on your laptop or desktop PC.

HMD's trump card, though, is the price. The 8.3 5G will be available this summer in a Polar Night color for 599 euros (roughly $648), which is well below most Android flagships not made by OnePlus, Xiaomi, Oppo and Realme. Sarvikas said the company has tried to strike a balance for people who want connectivity and performance without spending over $1,000.

That's not all, though. HMD Global is also launching a data roaming service called HMD Connect that works in over 180 countries. You sign up through an app, which also tracks your data usage, and then wait for a special SIM cards to arrive in the post. The exact pricing structure is unknown, however HMD has said that a 1GB bundle will be available for 9.95 euros (roughly $11). HMD Connect won't be a fully-fledged network, though, or even a virtual operator (MVNO). "We are not replacing your operator," Sarvikas explained." We're actually partnering with multiple operators in many markets." Still, it's notable that HMD Global is tip-toeing into the network space -- an area that Nokia (the real Nokia, that is) still works in. 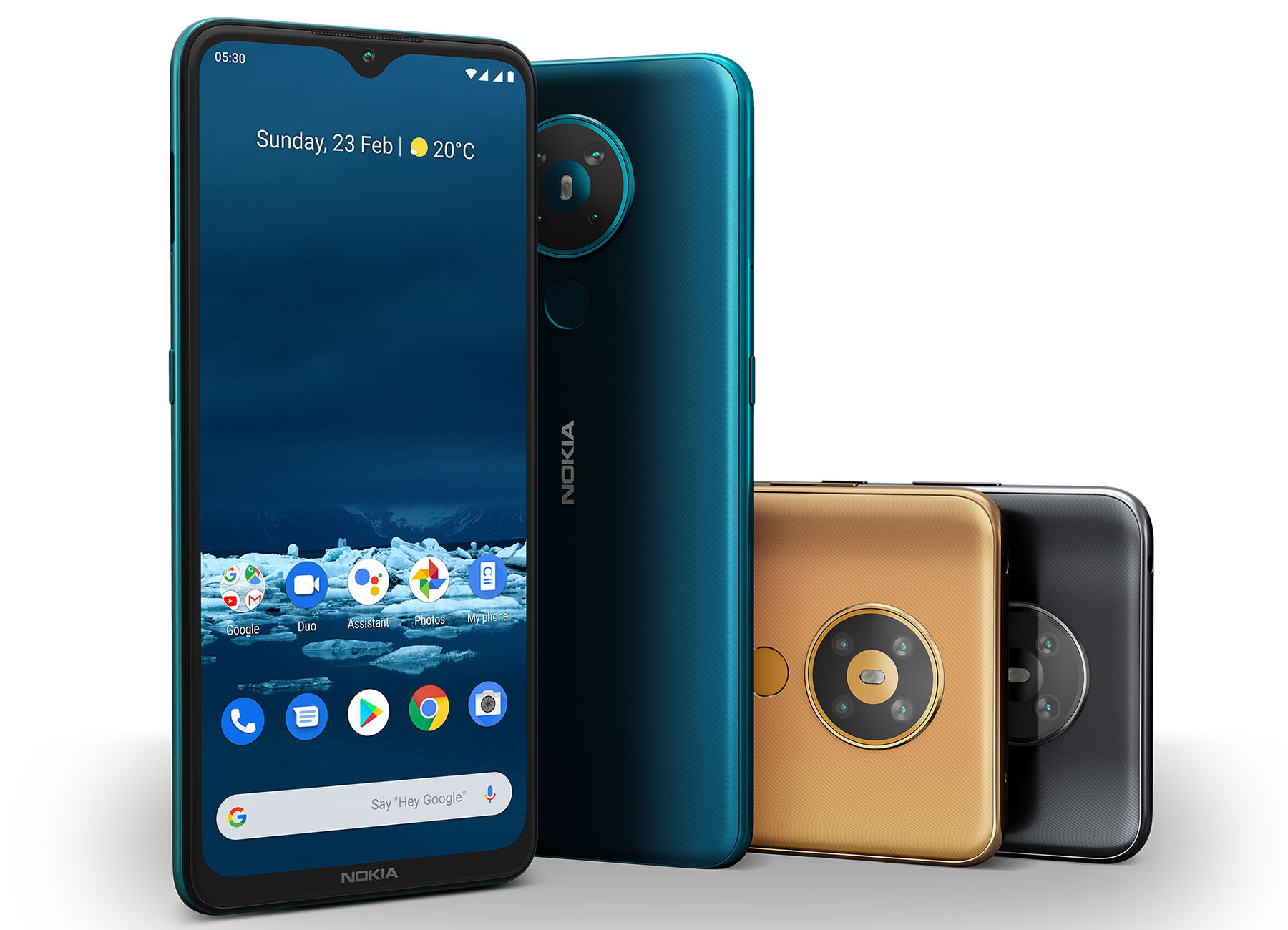 The middle child of HMD's new Android trio is the Nokia 5.3. The phone has a 6.55-inch, HD+ display with a 20:9 aspect ratio and a teardrop-shaped notch. It's powered by Qualcomm's Snaprdragon 665 processor -- a first for HMD Global -- alongside 3GB, 4GB or 6GB of RAM and either 64GB or 128GB of storage, depending on how much money you have to spend. The circular camera bump on the back houses a 13-megapixel primary shooter, as well as a 5-megapixel ultra-wide, a 2-megapixel macro and a 2-megapixel depth-sensing camera. On the front, meanwhile, you'll find an 8-megapixel camera for shooting selfies and on-the-go video calls.

Like all HMD Global phones, you can expect a clean version of Android 10 out of the box. The Nokia 5.3 also has a dedicated Google Assistant button (no word on whether it's remappable) and a rear-mounted fingerprint sensor for unlocking the device. The handset is also equipped with a 4000mAh battery which HMD claims will give you up to 22 hours of talk time or 1,875 days of standby time on a single charge. If you're looking for an alternative to the Moto G line, this could be worth considering. It'll be available in cyan, sand and charcoal next month, starting at 189 euros (roughly $204) for the model with 4GB of RAM and 64GB of storage. 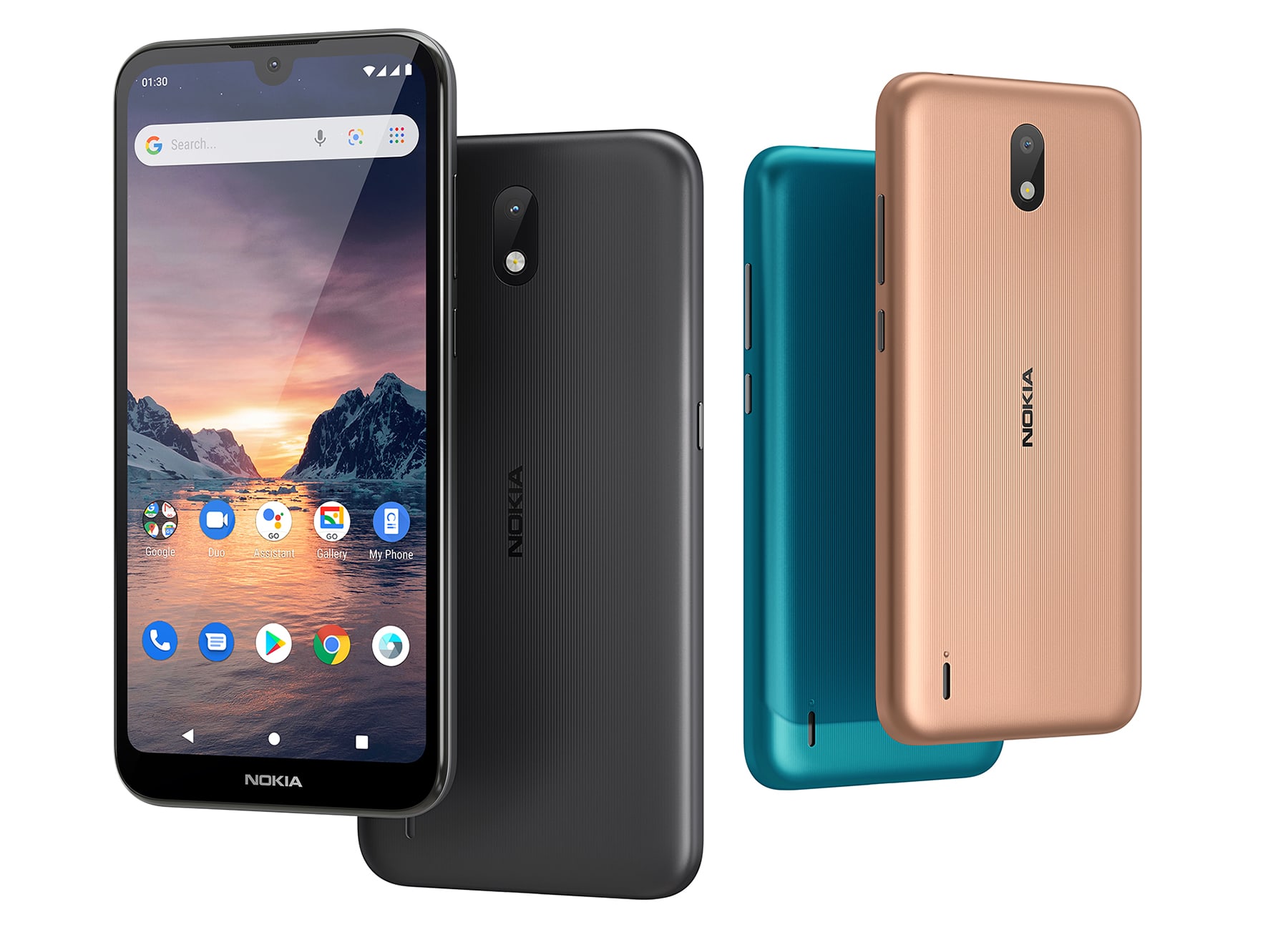 The cheapest addition to the company's Android lineup is the Nokia 1.3. Unlike the 8.3 5G and 5.3, this device runs Android 10 Go Edition, a version of the operating system designed specifically for low-end phones. It comes with a bunch of redesigned apps, including Maps, Gmail and the Google Assistant, that take up less space and don't require the same processing power as their classic Android equivalent. The Nokia 1.3 is also the first handset to ship with Camera Go, a streamlined app that has a portrait mode and, according to Google, "tracks how much photo and video storage you have left" and then "helps you clear up space so you never miss a shot."

The entry-level device has a 5.71-inch, HD+ display (1520x720) with a 19:9 aspect ratio and teardrop-shaped notch. Under the hood, you'll find a Qualcomm Snapdragon 215 processor, 1GB of RAM and 16GB of onboard storage, which can be bolstered by up to 400GB with a microSD card. There's an 8-megapixel camera with LED flash on the so-called 'nanopattern' back, a 5-megapixel selfie snapper and a removable 3000mAh battery that charges over microUSB and offers "all day plus battery life," according to HMD Global. The svelte package will be available next month in charcoal, cyan and sand for 95 euros (roughly $102).