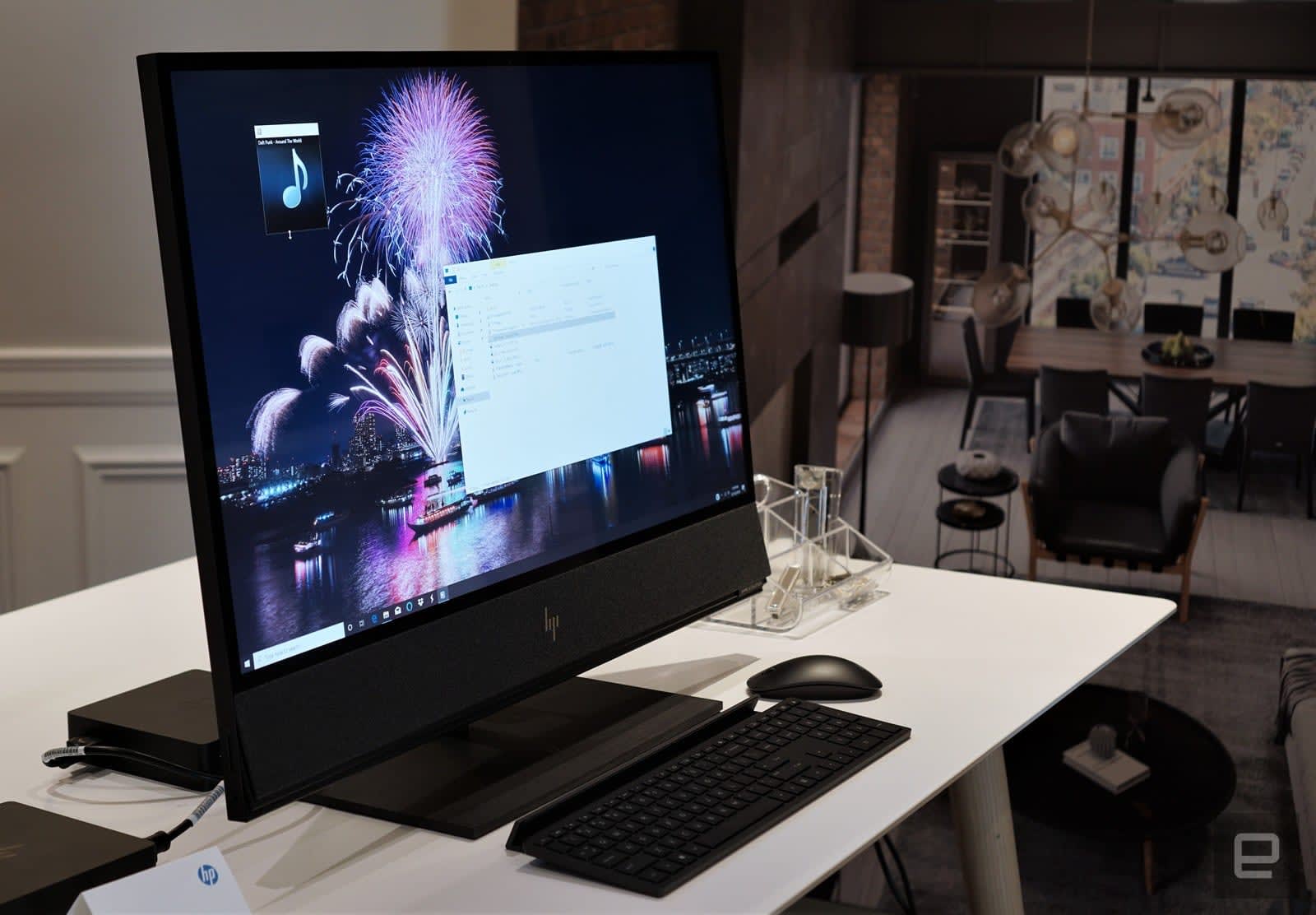 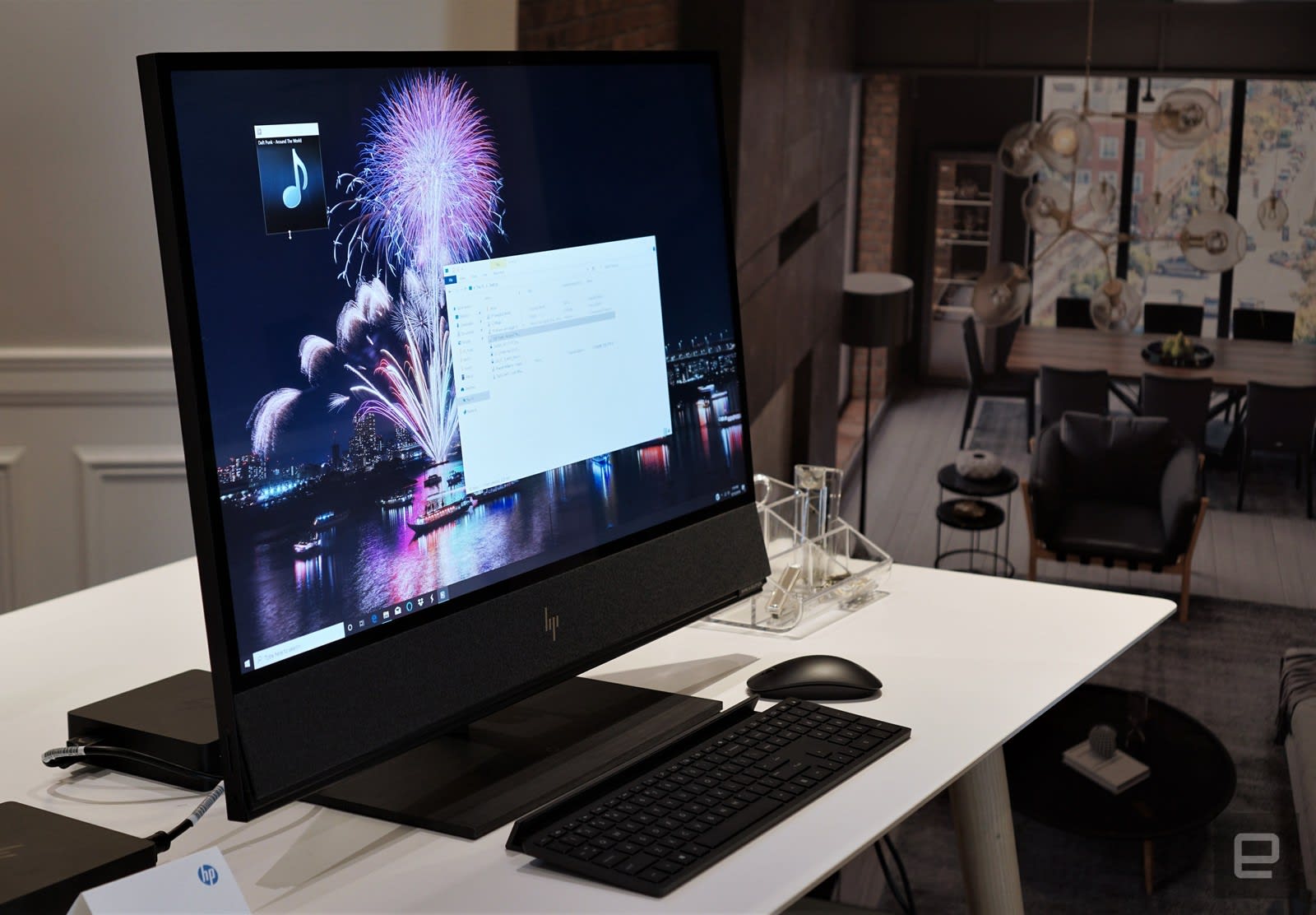 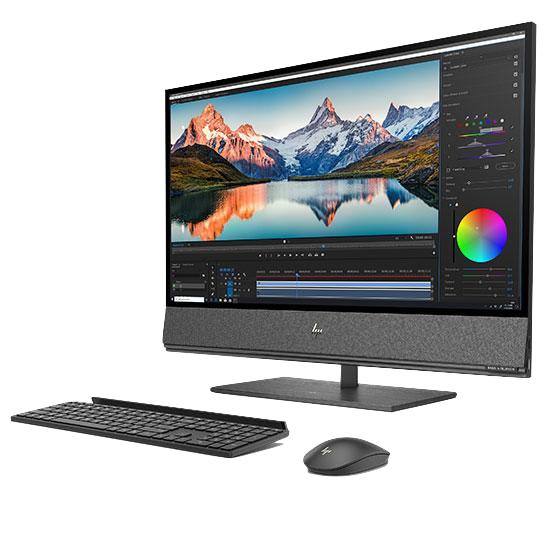 All-in-one computers typically aren't that exciting, not when we've got ultra-thin laptops hogging the spotlight. But HP's new Envy 32 All-in-One might make you rethink what's possible with a large table-top PC. It's a multimedia powerhouse, with a 31.5-inch 4K HDR screen, powerful Bang & Olufsen speakers, and NVIDIA graphics. While it's not quite as inventive as Microsoft's Surface Studio, the Envy 32 shows there's still plenty of room for all-in-one PCs to improve without getting obscenely expensive. HP’s newest all-in-one PC is made for people who want to be surrounded with a gorgeous screen and excellent sound. It’s a multimedia powerhouse, though it’s a shame that HP’s mouse and keyboard feel pretty cheap.

How would you rate the Envy 32 All-in-One?
We want to hear what you think. Post a quick review now to join the conversation!
Write a review

All it takes is one look to see what the stars of the show are with the Envy 32: that enormous screen and beefy speaker bar. The display is larger than the competition, which typically max out at 28 inches, and it's also the first all-in-one screen to support HDR at 600 nits of brightness. It feels absolutely towering when you're sitting in front of it. The display also covers 98 percent of the DCI-P3 standard with 10 bits of color depth, making it useful for creators who demand screens with the utmost accuracy.

The Envy 32's speaker setup, meanwhile, is made up of two tweeters, two medium drivers, a woofer and two passive radiators. You'll find similar hardware in home theater soundbars, but the Envy also pushes beyond those with more low end performance. The speaker is draped in an acoustically transparent cloth covering, giving it an elegant look overall. A leather Bang & Olufsen tag makes it clear this isn't your typical PC speaker, but really you could probably tell that from its sheer size. The Envy 32's speaker bar juts out several inches from the bottom of the screen, making its presence known. That's a good thing, since you'll never get decent sound from thin and tiny speakers.

Together, the Envy 32 All-in-One's display and speaker bar deliver an incredibly immersive entertainment experience. It doesn't matter if I'm just listening to some Gorillaz and browsing the web, or binging Netflix. The Envy 32 simply demands your attention. The screen is bright and colorful, making it ideal for editing photos or catching up on your favorite show. And if you're sitting up close, like many PC users, you'll actually notice the extra detail in 4K video.

The Bang & Olufsen speakers don't disappoint either, delivering clear vocals, vibrant mid-range and some table-shaking bass. Sure, you'll get thumpier deep notes if there was a subwoofer (which the Envy unfortunately doesn't support), but for music that's not always ideal. The speakers worked well for all types of tunes, from Hans Zimmer's orchestral soundtracks to Bjork's classic Post album. Most impressively, I could crank up the sound incredibly loud without hearing any distortion. At 50 percent volume, it's loud enough to fill a medium sized room. Like many smaller speaker arrangements though, you lose plenty of detail if you're not sitting directly in front of them.

HP didn't try to make the info look as sleek as the Surface Studio or iMac, but that's not necessarily a bad thing. It still gives off the air of being for professionals, with its thin screen borders, elegant acoustic fabric and angular case. It's a nice looking machine, though some of the design choices are a bit baffling (does there really need to be a wood grain finish?). Still, there are some thoughtful touches I appreciated, like the ability to wirelessly charge your phone from the base. The keyboard also has a helpful notch for a phone and tablet, and it can quickly connect to those devices too for easy multitasking. 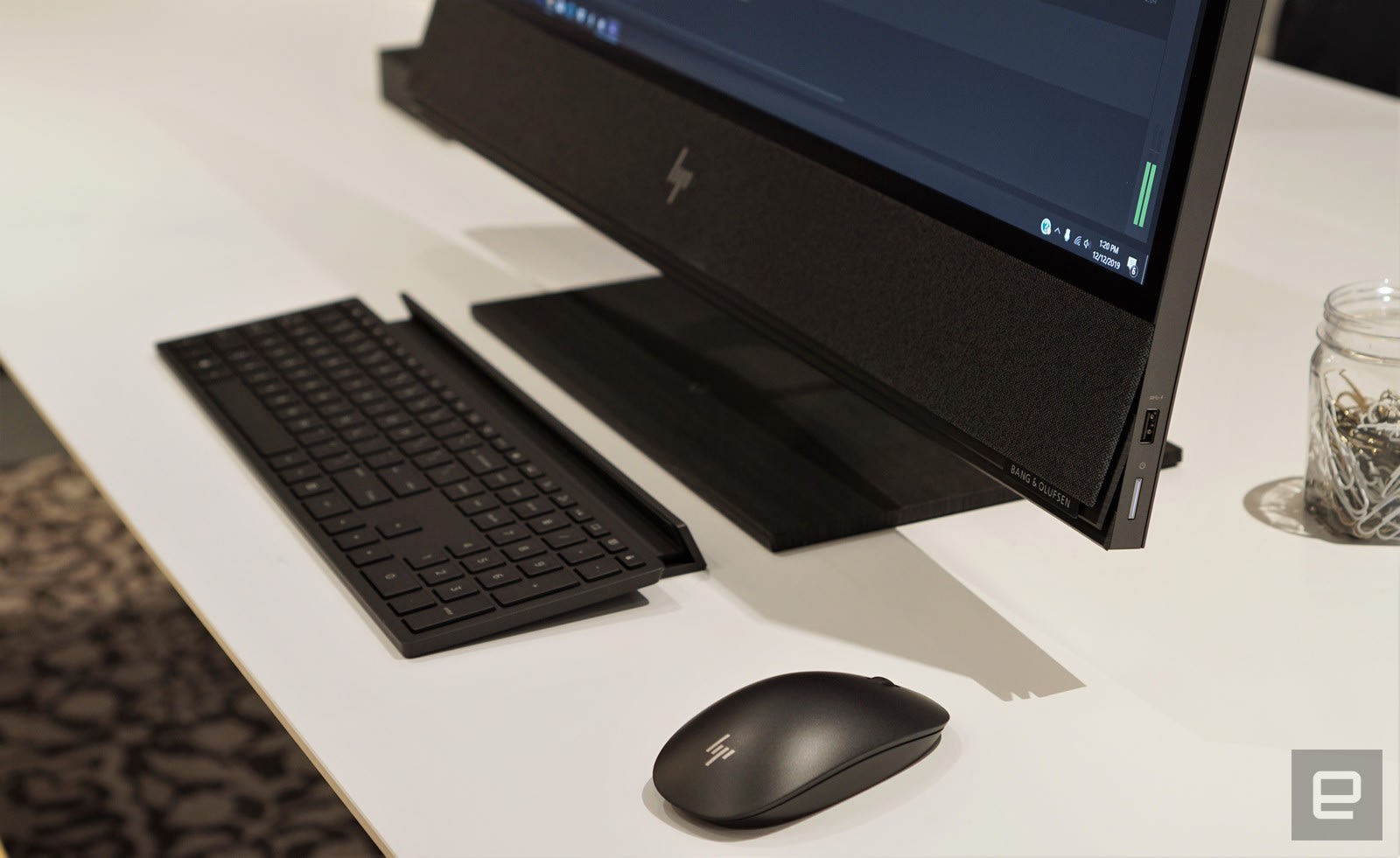 While I was impressed by the Envy 32 All-in-One's overall build quality, it's strange how HP cheaped out with its accessories. The keyboard looks very expensive, but the keys are mushy, typing on it is unpleasant and there's no real feedback. The mouse, meanwhile, just feels like bargain bin plastic. It's not ergonomic at all, and pressing the buttons is oddly awkward. I worried I was going to break the battery covers for both devices because they were so flimsy. Rather than throw in half baked accessories, I'd love to see companies like HP just include better options from third parties like Logitech. Stick with what you're good at, right? 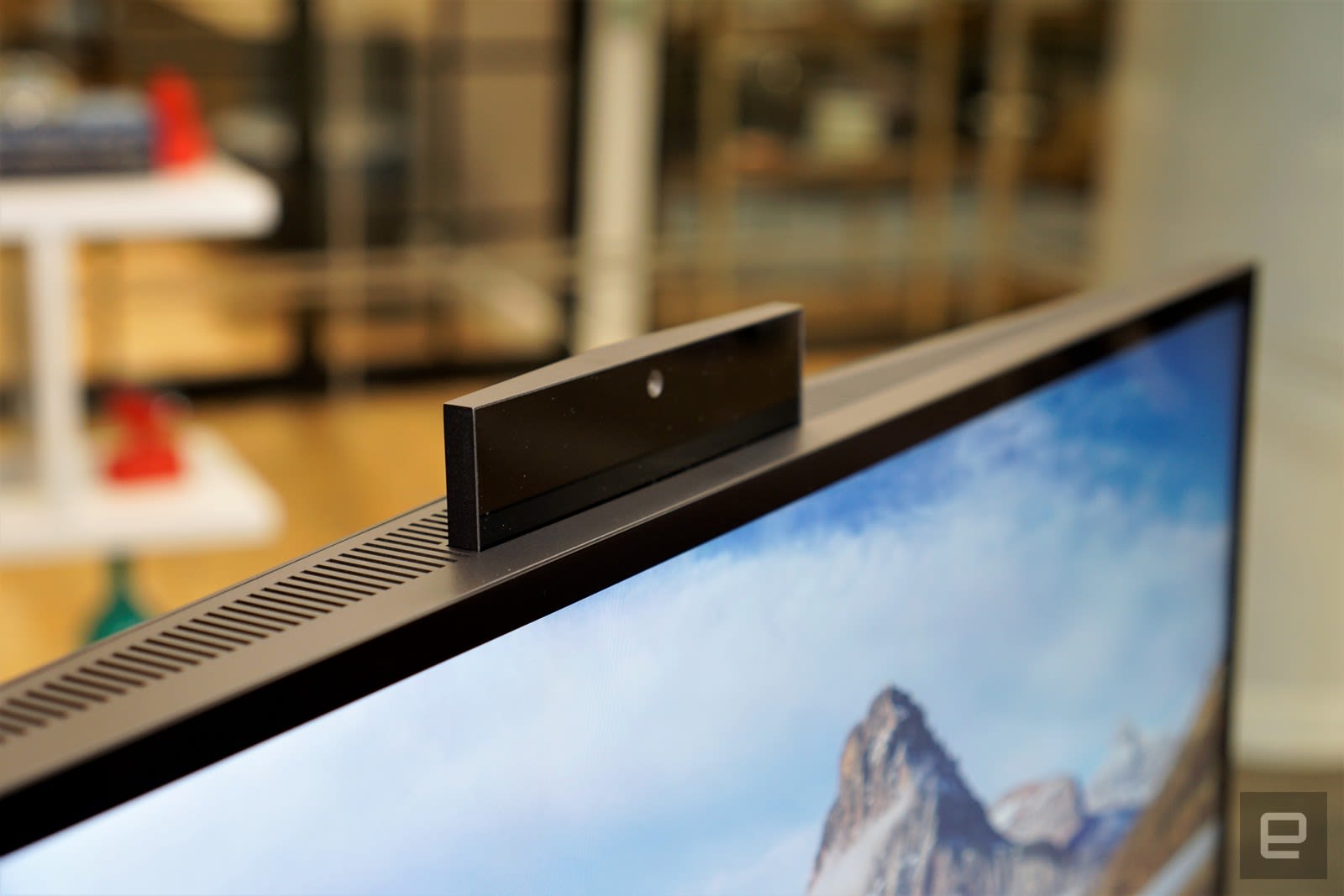 One thing you might not notice at first is a webcam. That's because HP hid it away in a drop down compartment above the monitor. That's great for privacy, but it also helps to streamline the look of the Envy. There's an infrared camera for fast face authentication with Windows Hello as well.

As you'd expect for something so large, the Envy 32 has a ton of connectivity options. Around the back, you've got two USB-C connections (one of which supports Thunderbolt 3), three USB Type A ports, HDMI input and output, and a gigabit Ethernet connection. On the right side, there's another USB Type A near the power button, and on the left there's an SD card slot and a headphone jack. You'll also need to leave plenty of room for the enormous 300-watt power adapter, which is practically as big as a mini-PC in its own right.

Under the hood, the Envy 32 is powered by Intel's latest 9th Gen desktop processors, going all the way up to the powerful 8-core i7 S-series chip. You can also stuff in up to 32GB of RAM and a 1 TB SSD, in addition to a secondary storage drive. And like I mentioned before, there's NVIDIA graphics, starting with the GTX 1060 and going up to the RTX 2060. You can spec this thing up into a truly beefy machine, one that'll be good for both a bit of gaming and some heavy-duty content creation.

Our review unit, which included the Core i7-9700 CPU, 32GB of RAM and NVIDIA's RTX 2060, flew through Windows like a dream. It didn't have any trouble with my usual workflow, juggling dozens of browser tabs, Spotify, Netflix, Slack and photo editing apps. With Handbrake, it managed to transcode a two-minute 4K clip into 1080p in just 58 seconds with the CPU, and 42 seconds with the NVIDIA encoder. And, obviously, there was enough power to play Overwatch and plenty of other modern titles in 1080p above 60FPS. You won't have much chance of actually rendering games in 4K for the Envy 32's sharp screen, but they'll still look decent upscaled from 1080p or 1440p.

So who needs the Envy 32 All-in-One? I could see it being useful for a media professional who needs an office or home machine without much clutter. Obviously, a desktop setup gives you more flexibility, but not everyone wants to crowd their workspace with cables and giant PC towers. The Envy 32 can also work as a secondary monitor, so you can plug in a gaming console if you'd like.

It's not exactly cheap, starting at $1800 with a Core i5 processor, 16GB of RAM and a GTX 1650 GPU. But it does offer a much larger screen, along with more storage and memory than a 27-inch iMac at the same price. The Envy 32 is also much cheaper than the Surface Studio 2, which starts at $3,500, but of course the beauty of that machine is its enormous touchscreen. The Envy 32's display is larger, but it won't do anything (other than collect fingerprints) when you poke it. 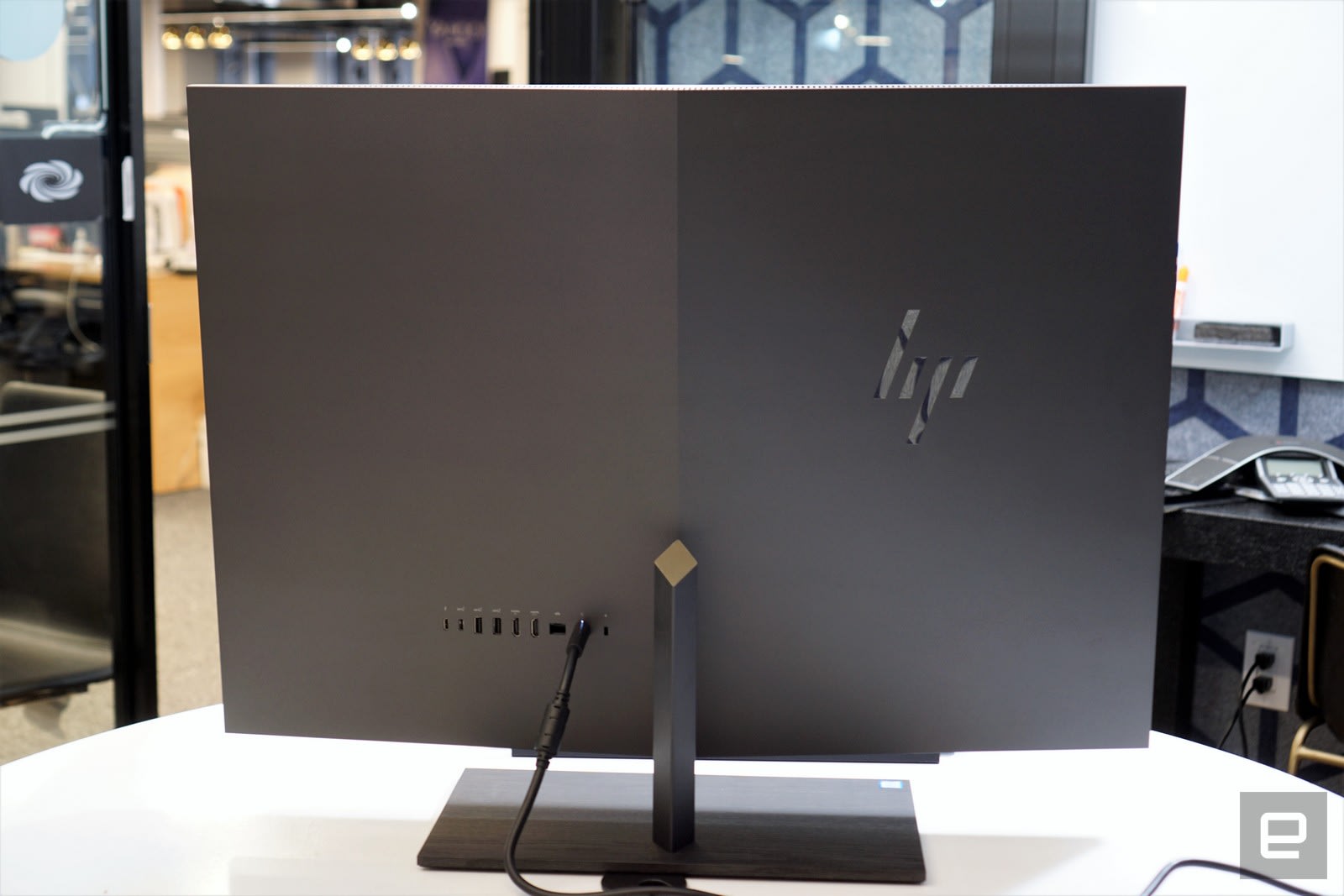 While its appeal may be limited, HP deserves credit for delivering an all-in-one PC that's actually lust-worthy. It has a gorgeous TV-sized screen, and some of the best computer speakers we've ever heard on a desktop. And it doesn't skimp on power either. On the whole, it has just about everything we'd want in a tabletop rig. Just be sure to save a bit extra to replace those accessories.

In this article: All-in-one PCs, ces2020, desktops, Envy 32 All-in-one, gadgetry, gadgets, gear, hp, personal computing, personalcomputing, review
All products recommended by Engadget are selected by our editorial team, independent of our parent company. Some of our stories include affiliate links. If you buy something through one of these links, we may earn an affiliate commission.