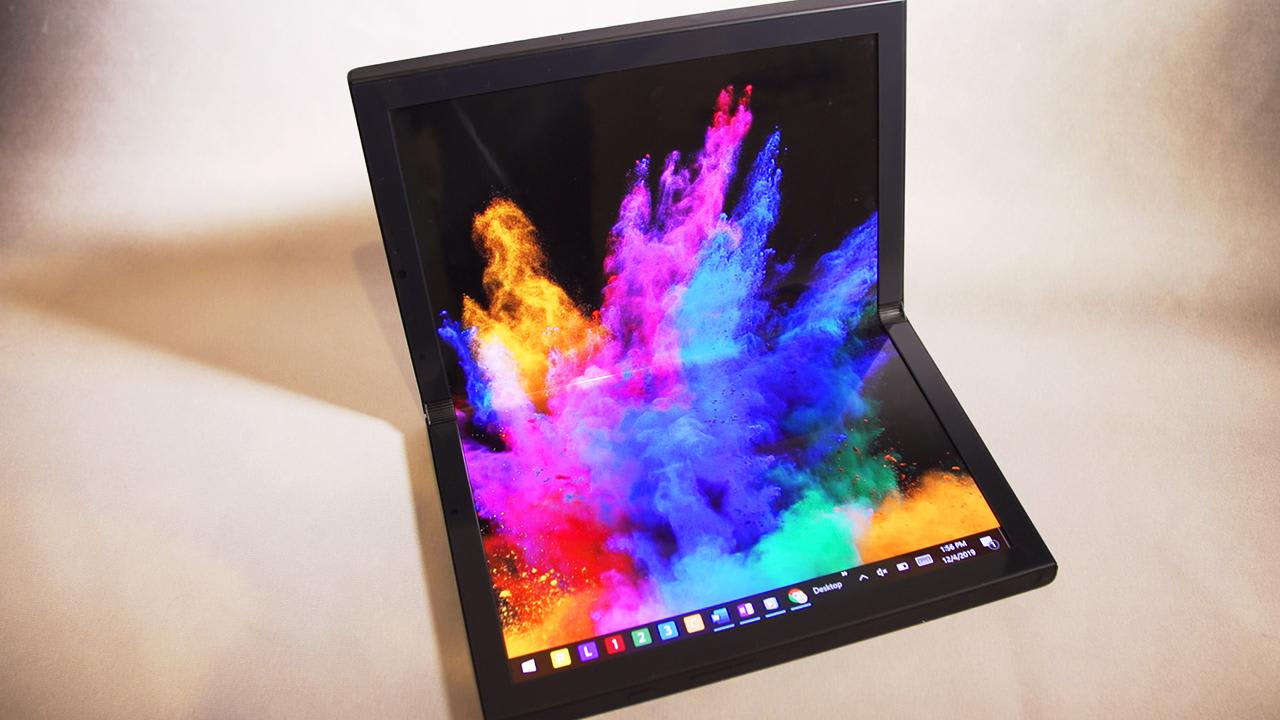 We may have left 2019 in the rearview mirror, but we clearly haven't given up on the foldable and dual-screen dreams just yet. In addition to a new flagship XPS 13 and a 5G-ready business laptop, Dell is here at CES 2020 with a few concept devices to show off. They're called the Concept Ori and Concept Duet, and are perhaps the company's most interesting offerings for the show. Dell gave reporters a preview at a recent briefing in New York, alongside an Alienware concept handheld console that is very reminiscent of a Nintendo Switch. Sadly, there's no details yet on when, if ever, these prototypes will become widely available.

In fact, specifics on things like processors, screen resolution and battery size or estimates are also undisclosed. All Dell really wanted us to know was that it was working on these machines and that it had the engineering chops to do foldables right.

The Duet is the more straightforward of the pair. It's Dell's take on Microsoft's dual-screen Surface Neo, and has two 13.3-inch screens connected by a hinge similar to those you'll find on a 360-degree convertible. Don't get too attached to any of the dimensions here, by the way -- Dell was hesitant to even share measurements with media. Really, all I can tell you about the hardware is that, for a prototype, the Duet felt refined and sturdy. Oh, and there's a physical keyboard accessory that takes up about half of the screen, which you can place on the bottom display for more natural typing.

Meanwhile, the Ori (short for origami) features a single 13.4-inch P-OLED screen that folds upon itself. Again, that's pretty much all the information Dell representatives could share. The company is really showing these off to tell people it is capable of delivering something like this. According to Dell's director of advanced industrial design Drew Tosh, the toughest thing his team had to figure out was the hinge which has to move independently but in concert with the display.

Like other folding-screen devices (remember the Galaxy Fold?), the Ori also has a slight crease on its face. Dell is also trying to figure out just how much crease is too much, and how much would people be okay with. On the prototype we saw, I barely noticed the distortion and it only was obvious when reading a page with a white background.

Finally, Tosh pointed to the bezels as another factor his team was trying to understand with Ori, as it continued to identify other potential challenges for the future of folding technology.

Aside from the hardware, Dell also wanted to showcase the type of software it can deliver on devices like this. Neither concepts were running Microsoft's Windows 10 X for such devices yet, since the software isn't available, so "we built some magic software to try and evaluate different experiences," Tosh said.

One of these was a three-finger gesture to send an app from one screen to another (on the Duet), while a four-finger tap quickly stretches an app across both displays. This worked in both landscape and portrait orientations. When you place the keyboard accessory on the top half of the Duet's base display, a digital trackpad shows up below it to make for a more intuitive laptop-like experience.

We saw fewer gestures like this on the Ori, but one example showed an onscreen keyboard appear on the lower third of the display when the device was folded and set up like a mini laptop.

No one other than Microsoft knows exactly what Windows 10 X will look like, and it's possible the company will have more elegant solutions for these use cases. But until then, Dell is looking into what it thinks customers will want and need. "If the OS is going to do it anyway, then we don't have to do it," Tosh said. "But there's some things we may find that they're not going to support (and) we may want to add it," he clarified. 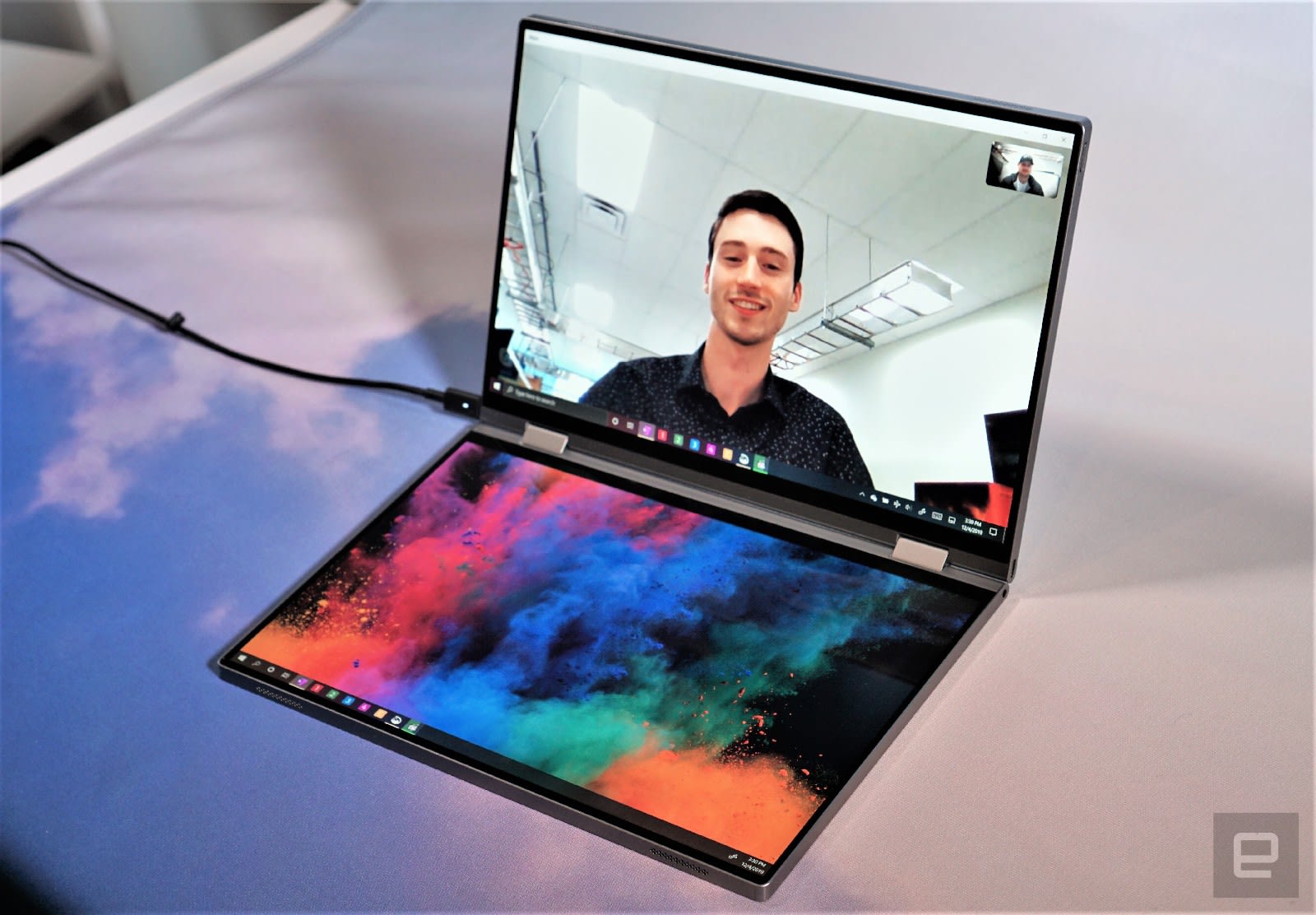 When asked whether a dual-screen or folding-screen device is more feasible, Tosh kinda sidestepped the question and said "I see Duet and Ori as both sides of the same coin." Duet's greatest issue at the moment lies in its software -- the hardware is pretty much ready. As for the Ori and other concept devices Dell is brewing in its experience innovations lab, Tosh explained it's an evergreen effort to figure out what happens in the future. As for today, we don't know when or if to expect Dell to roll push its experiments into production. But, it certainly seems like dual-screen laptops are nearly ready for prime time and are likely to arrive soon.

In this article: ces2020, dell, dell concept, foldable laptop, gadgetry, gadgets, gear, microsoft, personal computing, personalcomputing, surface duo, Windows 10 X
All products recommended by Engadget are selected by our editorial team, independent of our parent company. Some of our stories include affiliate links. If you buy something through one of these links, we may earn an affiliate commission.