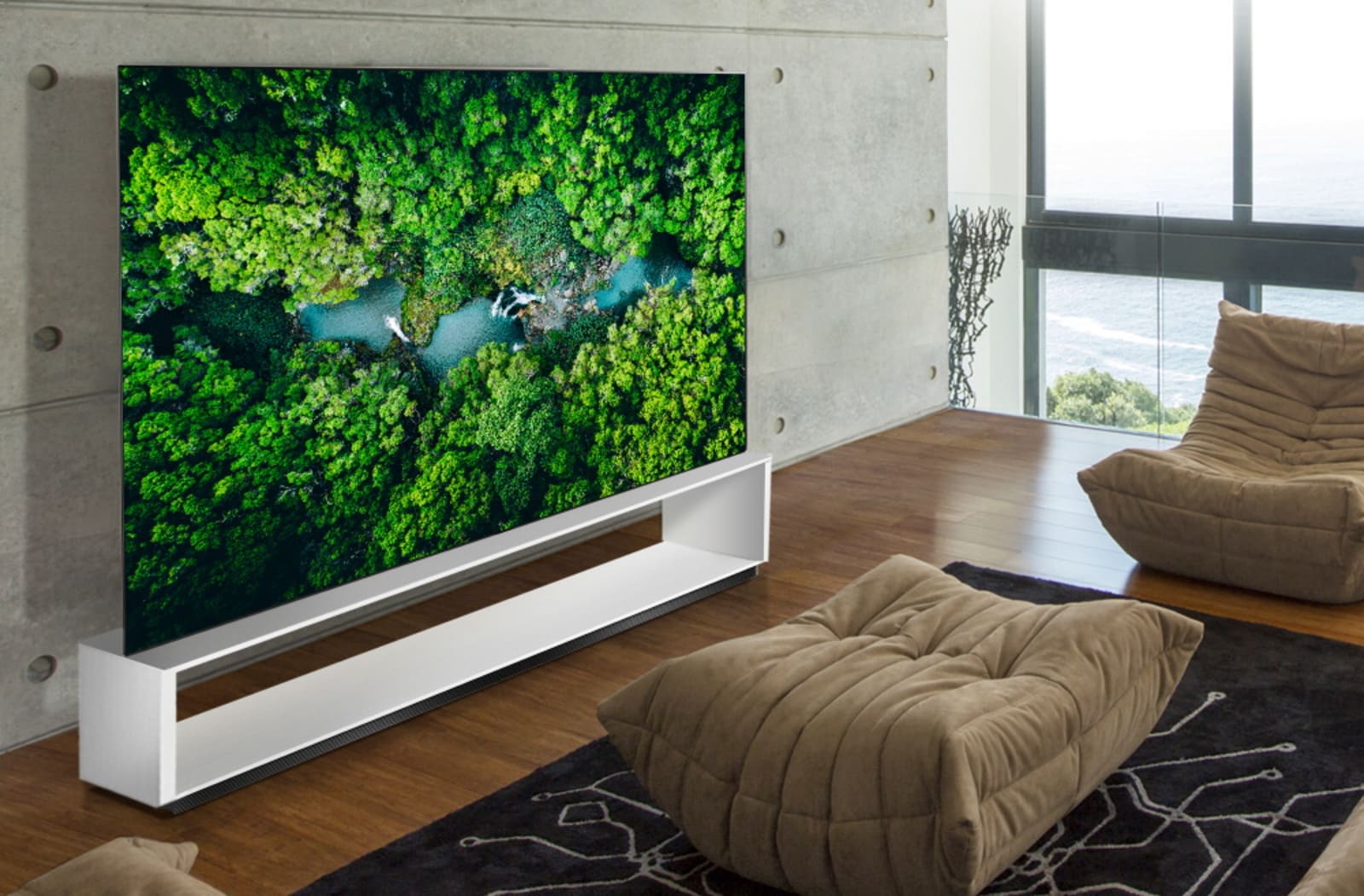 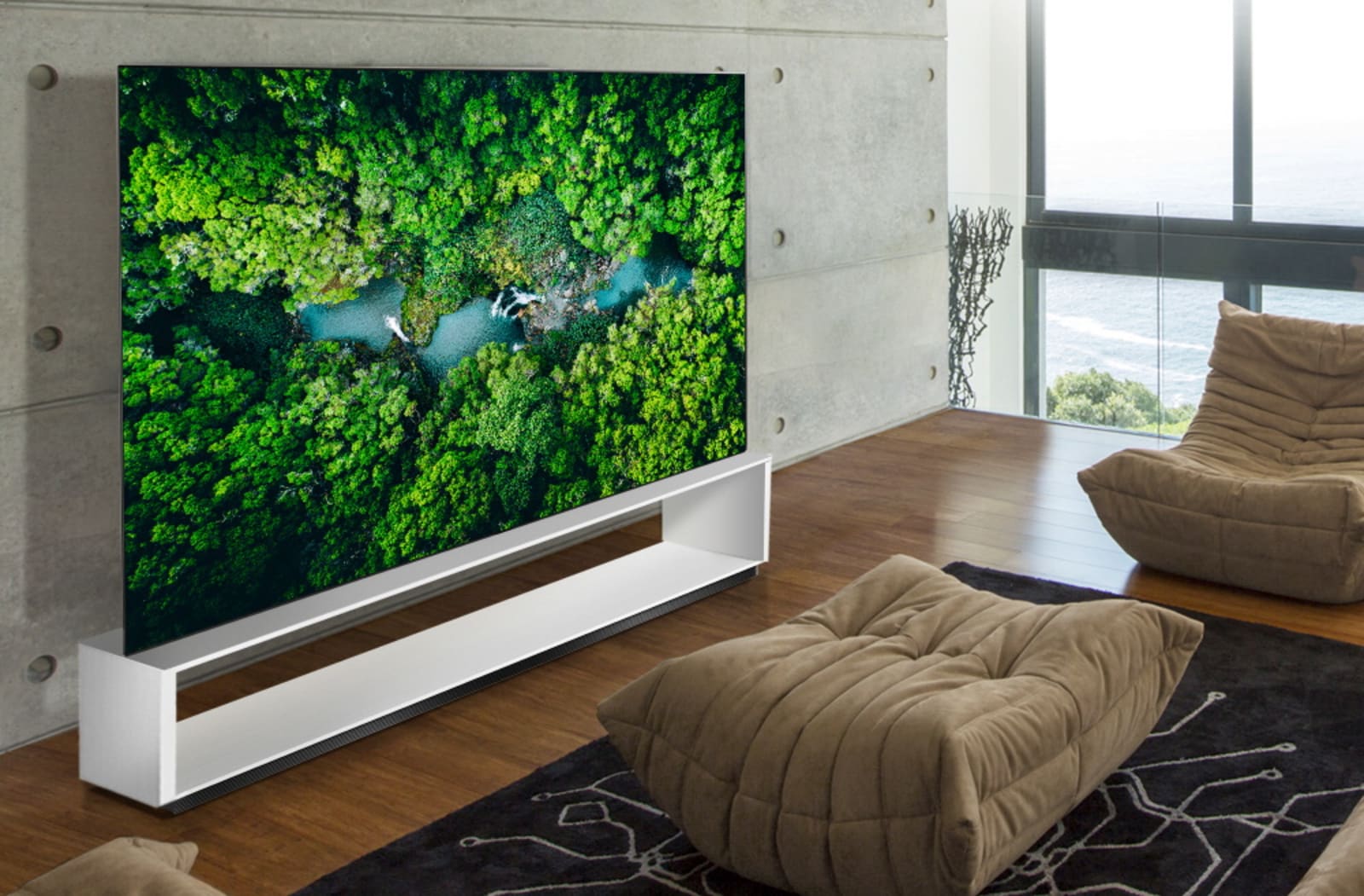 It was hard to escape 8K TVs this year at CES. Sony, Samsung, LG and TCL all showed off new 8K models, with the full intention of actually selling them to consumers. That's a big shift from previous years, when it's always seemed like some far-off technology awaiting industry support. So what's the point of buying an 8K TV in 2020? Our TV nerds, Devindra Hardawar and Richard Lawler, have two very different stances on the matter. Walking through the halls of CES was a baffling experience this year. Every major TV manufacturer seemed to be preparing for an onslaught of 8K content on the horizon. Except we all know that's not happening anytime soon. It was like they were all Linus from Peanuts, preparing for the arrival of the Great Pumpkin. What's the point of pushing these sets so early when they're going to be obscenely expensive, and likely outdated by the time 8K content actually arrives?

This year, we saw flagship 8K sets from LG, Samsung, Sony and TCL. It's not a new thing to see 8K sets being promoted at CES, but this year every manufacturer was positioning them as their flagship products, as if they were ready to retire 4K entirely. I get it: CES is mostly a venue for one-upping the competition, whatever the cost. But all of these companies are also planning to sell these 8K TVs this year to unsuspecting consumers: It's not as if they're showing off harmless concepts.

Ironically enough, all the TV makers were playing the same 8K YouTube demo reels, which highlighted astounding natural sights and exotic animals. On LG's 8K OLED, I felt like I could almost see every individual strand of hair on a magnificent tiger. But when I asked representatives about what other 8K content we could look forward to, they all just touted the upscaling capabilities of their respective sets. 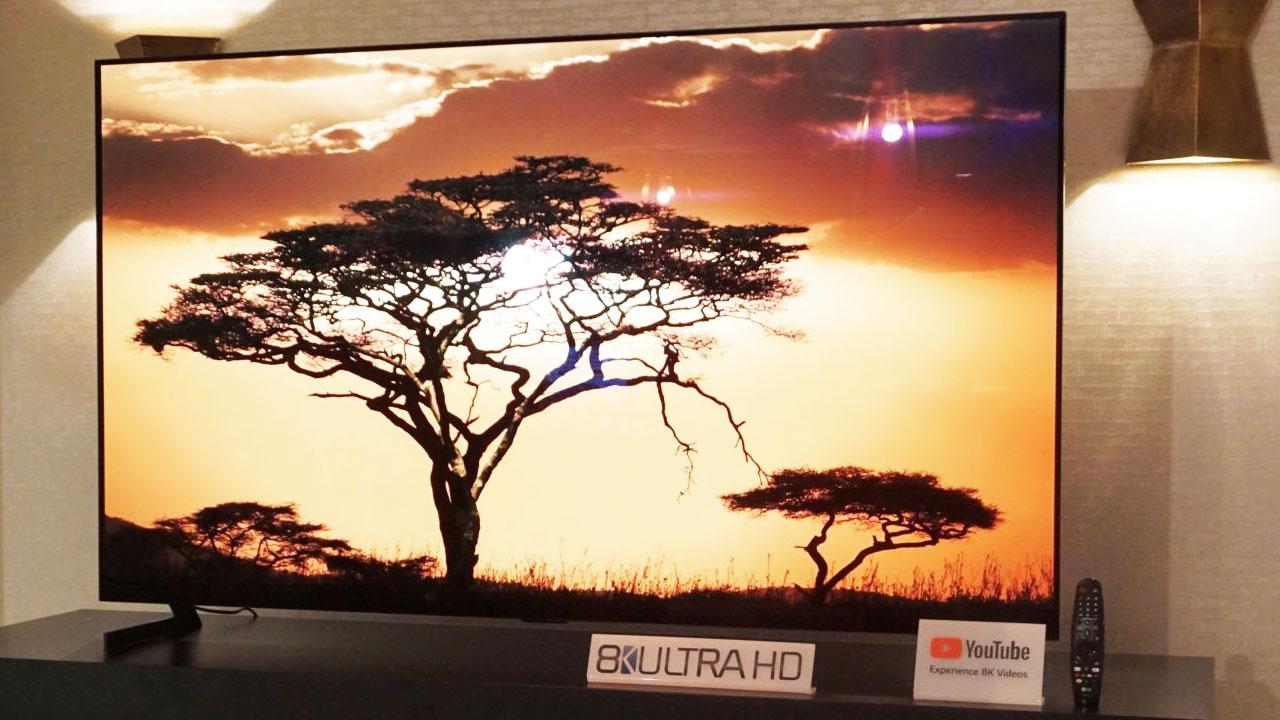 Sure, you'll get a bit of a sharpness bump with those resolution-inflating algorithms, but are you going to buy a pricey new 8K TV to watch 1080p or 4K content? And if you're upgrading from a 1080p TV, wouldn't you save a lot more money by getting a 4K set that's been user tested for years? 8K hardware can't lean on upscaling alone.

It's sad to say, but the tech and media industry hasn't progressed much since the last time I argued against the rise of 8K hype, in 2018. Aside from NHK in Japan, there aren't any broadcast plans for producing content at such a high resolution. And you can forget about easily streaming 8K over the internet, where you won't find any content outside YouTube. Even if you're hankering for a very large TV above 77 inches, the visual difference between a modern 4K set and an 8K isn't significant.

The biggest reason you should be wary of 8K sets now? Like with early 4K sets, there's a good chance we'll see new technology over the next few years that'll quickly become standard. If you bought a 4K TV early on, you didn't get HDR or Dolby Vision, two technologies that led to a more significant visual upgrade over standard 1080p HD. You were sore out of luck. Similarly, new TV sets are touting ATSC 3.0 support, which allows for 4K over-the-air broadcasts, but it's still unclear how 8K will be supported on that standard.

Here's what it comes down to: You have nothing to gain, and everything to lose, by being an 8K early adopter. I'm not going to insult your intelligence. Unlike my colleague Devindra and certain click-hungry people across the internet, I'm going to give you the benefit of the doubt and assume that you know whether or not you can afford to be an early adopter when it comes to a new era of TV. The question of whether or not you have a budget and living space that's compatible with a 75-inch 8K television isn't something that you need my help to answer.

More than a year ago this pixel-hustler Hardawar warned you that "you don't have to fall for their thirst trap" when it comes to 8K. Now think back. Over the past year, has anyone stopped you from enjoying life with a mere 4K or even 1080p set? No! And you will continue to live in peace for many years. (Unless you're still watching 720p. Seriously, it's a new decade, and you have to step it up.) 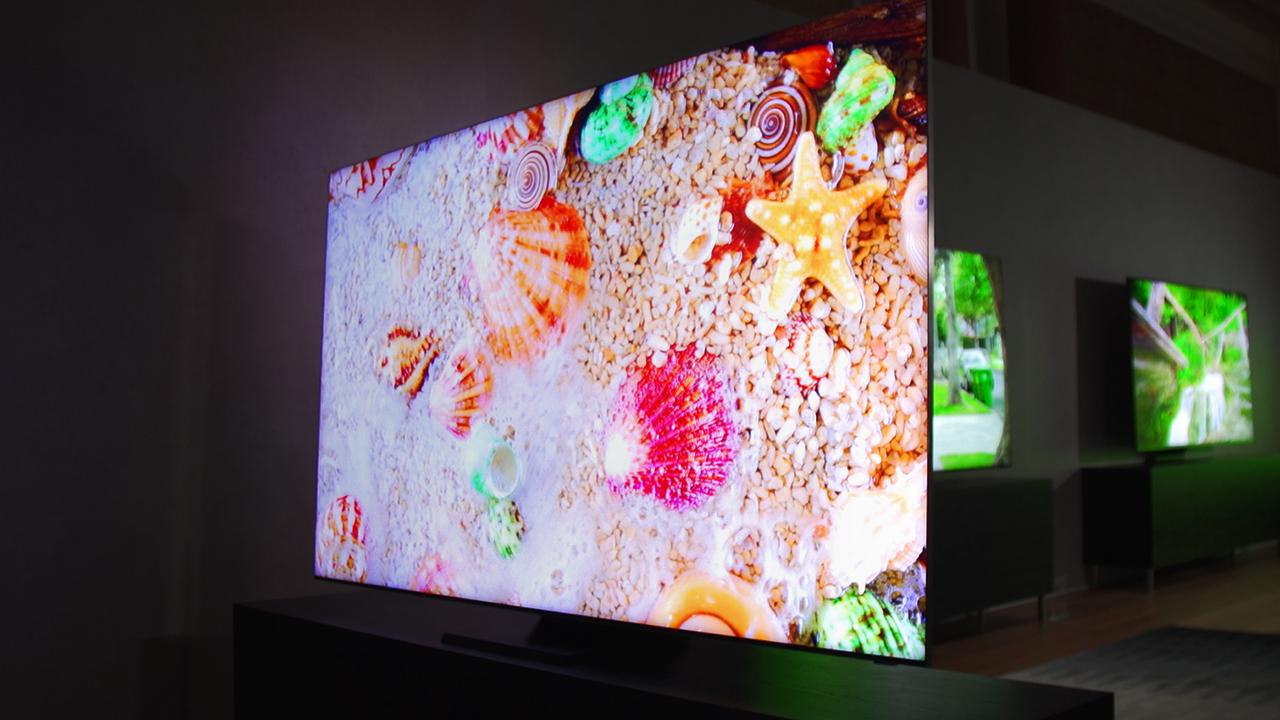 I've seen this before. Every time there's a resolution bump in TVs, pixel skeptics show up with their claims of "overhyped," "unnecessary" and "there's no native content," and when those arguments fall flat, they go back to the damn charts. If there's anything we've learned, it's that charts are not only irrelevant to what's actually perceivable by the human eye but also don't account for additional technology upgrades that come with new TVs, like processing better compression algorithms, better contrast, more-precise lighting control and other changes.

The other thing that's consistent? A couple of years later, most of those same folks have purchased the same TVs they were so concerned about. It's a fairly regular process. This sense of discomfort is in fact their own desire to possess the forbidden fruit of increasingly higher resolution. It's sad, and I hope my friend Mr. Hardawar comes to his senses, because this time around, there's almost no reason to feel guilty.

We live in an era when improved algorithms and hardware combine with high-quality sources to make sure that "upscaling" is no longer a dirty word. You can watch a Blu-ray disc or 4K stream on an 8K television without worrying that you'll be stricken with a subpar experience. Plus, TVs on display at CES this year promise support for new HDMI 2.1 standards and codec support that should keep them relevant for quite some time. You may not remember, but there was a time when manufacturers had to explain selling 1080p TVs that had no way to accept a 1080p input at all. That happened!

I was turned by the 8K movement back in 2012. I was able to observe Usain Bolt running the 100m dash at the London Olympics in the format long before it was ready. Back then, it had to be delivered over Internet2 and required a decoder box bigger than your living room table. But in the years since, we've gotten to a point where such video can realistically stream over the regular internet, and advancements won't stop there. The realism that I know is possible with the combination of HDR and 8K presentation still outpaces anything I've seen in 4K. 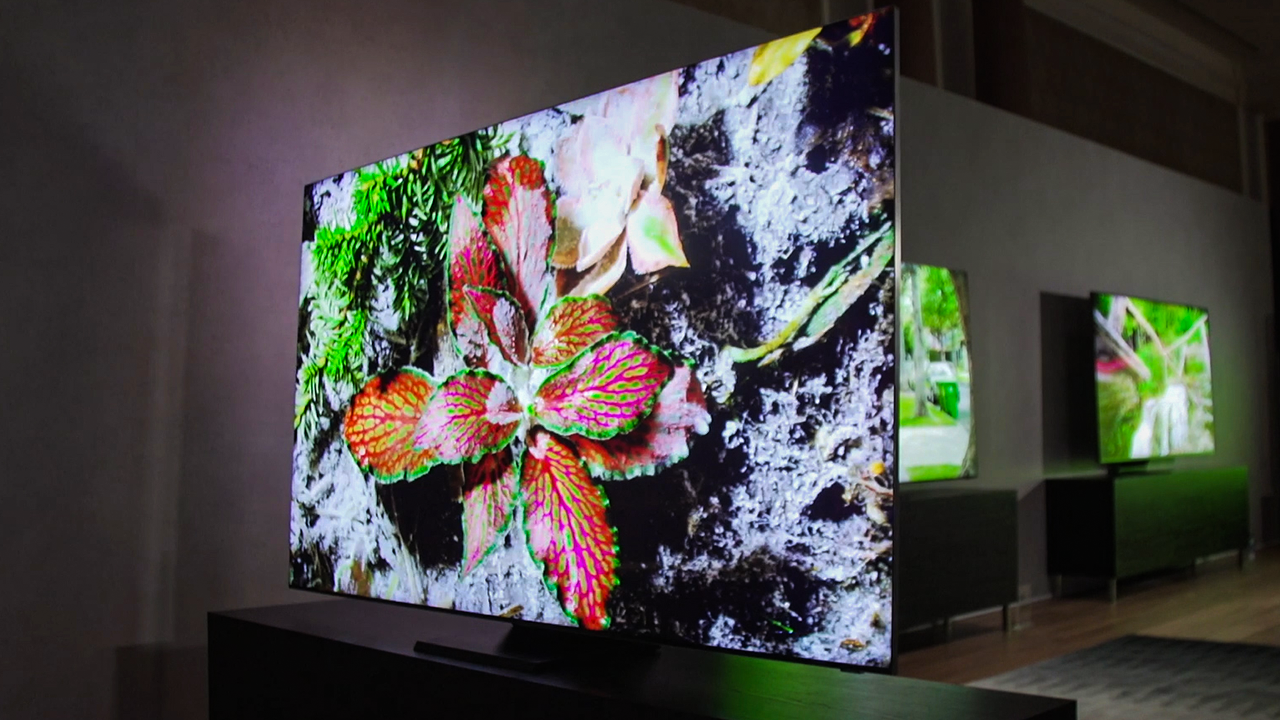 If you're happy buying a 4K TV in 2020, then more power to you. I just bought my first one a few months ago -- yes, you can love resolution and still wait responsibly to make an upgrade. If you want to buy the highest-resolution display available, then you won't find me trying to talk you off that ledge. Suggesting that manufacturers should only pursue OLED tech is silly, as the gap between technologies is perhaps closer than ever.

I don't think anyone will realistically bring home an 8K LED TV from Sony, Samsung or LG and find themselves disappointed by the display's performance. Will it be worth what they paid? That's for them to judge, and for some people, flicking the resolution on a YouTube stream all the way up and setting fire to their bandwidth cap will be completely worth it. I thank those brave souls, because their early buy-in is the same thing that's pushing prices down on 4K TVs that I'm more likely to purchase right now. One day, when I've decided the time is right for me, I'll get an 8K television too -- and I won't double-check a chart before I do it.

In this article: 8K, av, CES2020, entertainment, gadgetry, gadgets, gear, lg, samsung, sony
All products recommended by Engadget are selected by our editorial team, independent of our parent company. Some of our stories include affiliate links. If you buy something through one of these links, we may earn an affiliate commission.