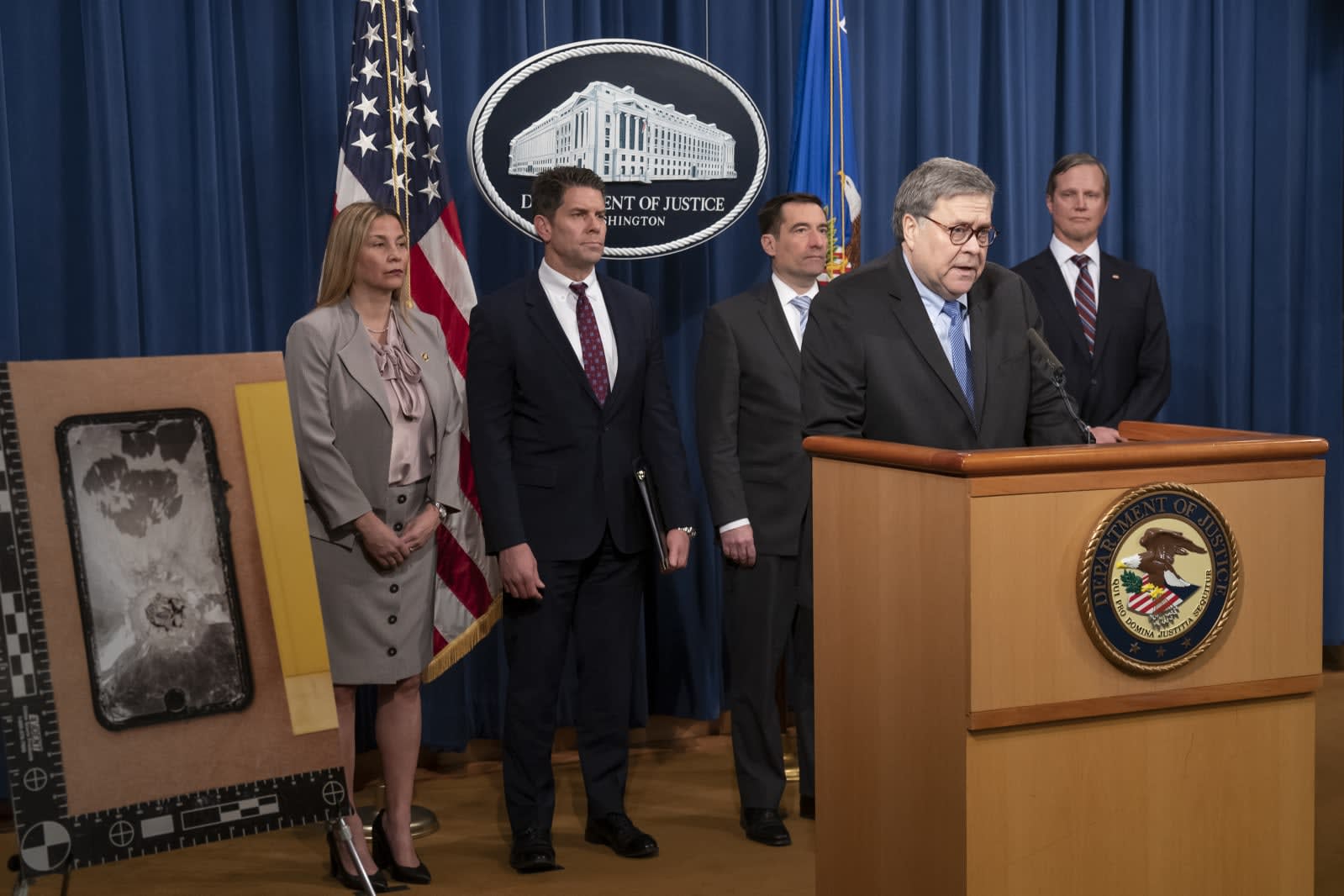 Attorney General William Barr has joined the FBI in asking Apple to unlock two iPhones belonging to the man who attacked a naval base in Pensacola, Florida, in December. Barr also declared the shooting "an act of terrorism."

Apple has given investigators details from Mohammed Saeed Alshamrani's iCloud account, but it rejected a plea from the FBI to unlock the phones. The company has claimed complying with such a request could set a precedent that may compel it to unlock a device whenever a federal agency asks it to.

The Justice Department wants access to Alshamrani's phones so it can view encrypted messages on apps such as WhatsApp and Signal. It's hoping to determine whether he was acting alone or if others knew of his plans. Barr noted that both phones were damaged in the attack, but said FBI crime lab experts were able to make them operational.

The attorney general claimed at a press conference Monday Apple "has not given us any substantive assistance" when it came to unlocking the devices. "This situation perfectly illustrates why it is critical that investigators be able to get access to digital evidence once they have obtained a court order based on probable cause," he said. "We call on Apple and other technology companies to help us find a solution so that we can better protect the lives of Americans and prevent future attacks."

Barr said investigators found that Alshamrani, a Saudi air force member who was training at the base, posted a message on September 11th saying "the countdown has begun." The gunman "posted other anti-American, anti-Israeli and jihadi messages on social media, and did so two hours before his attack," according to Barr. Alshamrani killed three and wounded eight others before responding officers shot him dead.

Barr has argued the government should have backdoor access to encrypted communications in the interest of public safety, and last month described that as one of his department's "highest priorities." However, Apple is said to be standing firm in its support of encryption, which could set it on a path towards another high-profile privacy battle with authorities.

Were the government to be successful in its "dangerous and unconstitutional" demand, it would "weaken the security of millions of iPhones," according to the American Civil Liberties Union.

"Strong encryption enables religious minorities facing genocide, like the Uyghurs in China, and journalists investigating powerful drug cartels in Mexico, to communicate safely with each other, knowledgeable sources, and the outside world," ACLU Surveillance and Cybersecurity Counsel Jennifer Granick said in a statement. "There is simply no way for Apple, or any other company, to provide the FBI access to encrypted communications without also providing it to authoritarian foreign governments and weakening our defenses against criminals and hackers."

The government made similar requests following an attack in San Bernadino, California, in 2015. The FBI sued Apple in an attempt to unlock an iPhone belonging to one of the shooters, who police killed in a subsequent shootout. However, the bureau gained access to the device using a third-party tool and dropped the case.

Update (10:56 PM ET): In a statement to the media, Apple pushed back against any suggestion that it has not provided help, claiming "tireless" work in support FBI efforts, and noted its opposition to backdoors that may weaken encryption. Specifically, Apple claimed it had not been informed about a need for additional assistance until January 6th, and there was no subpoena about a second phone until January 8th.

We were devastated to learn of the tragic terrorist attack on members of the US armed services at the Naval Air Station in Pensacola, Florida on December 6th. We have the greatest respect for law enforcement and routinely work with police across the country on their investigations. When law enforcement requests our assistance, our teams work around the clock to provide them with the information we have.

We reject the characterization that Apple has not provided substantive assistance in the Pensacola investigation. Our responses to their many requests since the attack have been timely, thorough and are ongoing.

Within hours of the FBI's first request on December 6th, we produced a wide variety of information associated with the investigation. From December 7th through the 14th, we received six additional legal requests and in response provided information including iCloud backups, account information and transactional data for multiple accounts.

The FBI only notified us on January 6th that they needed additional assistance — a month after the attack occurred. Only then did we learn about the existence of a second iPhone associated with the investigation and the FBI's inability to access either iPhone. It was not until January 8th that we received a subpoena for information related to the second iPhone, which we responded to within hours. Early outreach is critical to accessing information and finding additional options.

We are continuing to work with the FBI, and our engineering teams recently had a call to provide additional technical assistance. Apple has great respect for the Bureau's work, and we will work tirelessly to help them investigate this tragic attack on our nation.

We have always maintained there is no such thing as a backdoor just for the good guys. Backdoors can also be exploited by those who threaten our national security and the data security of our customers. Today, law enforcement has access to more data than ever before in history, so Americans do not have to choose between weakening encryption and solving investigations. We feel strongly encryption is vital to protecting our country and our users' data.

Via: New York Times
Source: Justice Department
Coverage: Reuters, Bloomberg
In this article: apple, attorney general, attorneygeneral, fbi, gear, iphone, justice department, justicedepartment, pensacola, politics, privacy, security, shooting, william barr, williambarr
All products recommended by Engadget are selected by our editorial team, independent of our parent company. Some of our stories include affiliate links. If you buy something through one of these links, we may earn an affiliate commission.