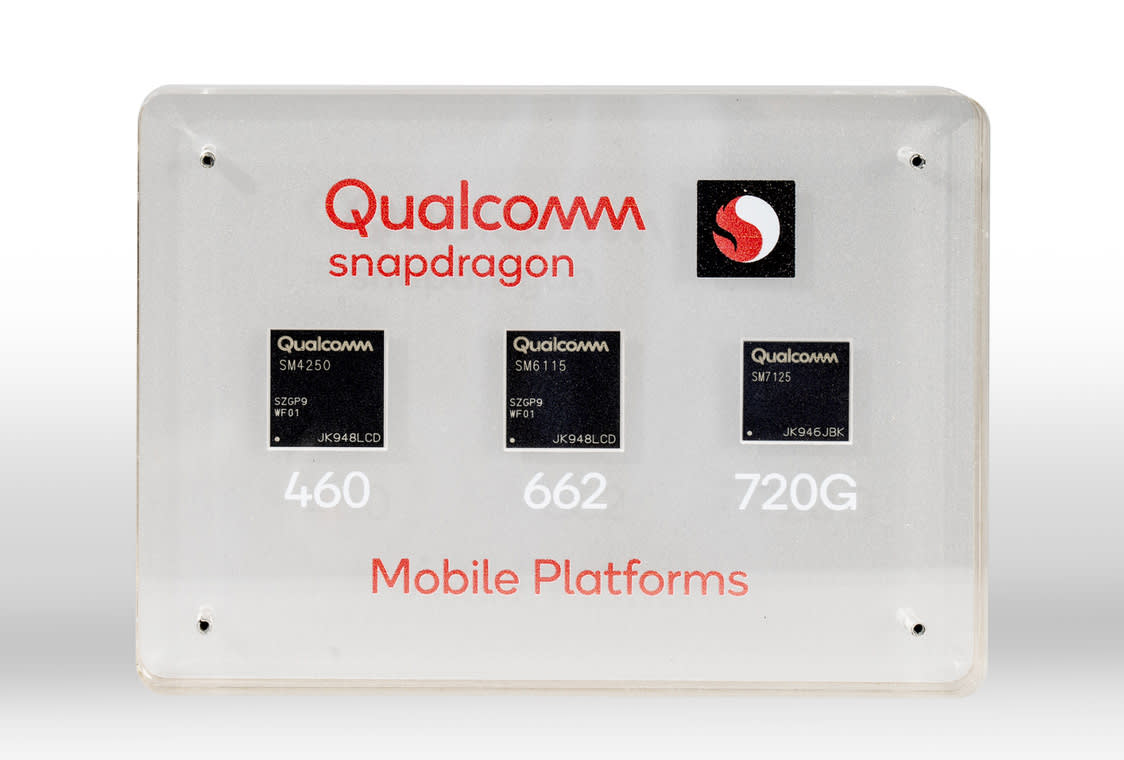 2020 is the year 5G will start making a difference for people, but 4G LTE networks aren't going anywhere. If anything, they'll remain the de facto means of connection for much of the world for years, so it's little surprise to see Qualcomm rolling out a trio of modern, 4G-focused smartphone processors.

The company announced the new Snapdragon 720G, 662 and 460 at a press event in New Delhi this morning, and all three share certain characteristics -- think support for WiFi 6 and India's NavIC satellite positioning system. While it's easy enough to read these announcements as overture to an incredibly valuable country, Qualcomm insists these new processors will make their way to the US and other mature markets, too.

But anyway, let's talk about the chips themselves. The octa-core Snapdragon 720G is (obviously) the most powerful of the bunch and will be aimed at higher-end phones, though not full-blown flagships like Samsung's upcoming Galaxy S20 series. The "G" in the chipset's name refers to its focus on gaming, so expect 10-bit HDR and the same anti-cheating measures Qualcomm built into the premium Snapdragon 855.

The Snapdragon 662 feels like a dialed down version of the 720G. Sure, it too is an octa-core chip, but it top speeds cap at around 2.0GHz (compared to the 720G's 2.3GHz), and X11 modem can only hit a theoretical limit of about 390Mbps down. You might notice the improvements it brings if you're an avid smartphone photographer; Qualcomm says the 662 supports "new triple camera configurations and smooth switching between them," as well as storing images in the super-efficient HEIF file format. Meanwhile, the Snapdragon 460 uses the same modem and lower-tier AI engine as the 662, but its new performance cores and an improved GPU architecture means the chipset performs more than 50 percent faster than the Snapdragon 450.

Qualcomm stands to gain dramatically as 5G becomes more pervasive this year, but keeping its 4G customers happy is good business. In growing markets, the company faces serious competition from rival chipmakers like Mediatek, not to mention smartphone makers that use their own homemade processors -- think Samsung and Huawei. We can't say for sure whether these new chipsets will help Qualcomm beat back its rivals, but it can't afford not to try.

In this article: chipset, gear, LTE, mobile, qualcomm, snapdragon, snapdragon 460, snapdragon 662, snapdragon 720g
All products recommended by Engadget are selected by our editorial team, independent of our parent company. Some of our stories include affiliate links. If you buy something through one of these links, we may earn an affiliate commission.