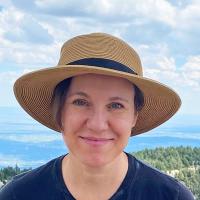 Amy Skorheim
Commerce Writer
After five years living off-grid in the wilds of New Mexico, Amy returned to civilization with a renewed respect for technology and its power to move us forward. She has an English degree from UCLA and her writing has appeared in Futurism, Digg and GearMoose. When she’s not writing about gadgets and electronics, she’s binging weird TV and turning off motion smoothing on other people’s sets.