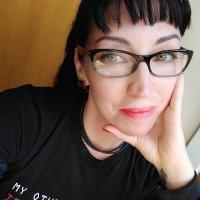 Violet Blue
Journalist
Ms. Violet Blue (tinynibbles.com, @violetblue) is the author of the book How To Be A Digital Revolutionary. She is a freelance investigative reporter on hacking and cybercrime, as well as a noted columnist. She is an advisor to Without My Consent, and a member of the Internet Press Guild. Ms. Blue has made regular appearances on CNN and The Oprah Winfrey Show and is frequently interviewed, quoted, and featured in a variety of outlets including BBC, Newsweek, and the Wall Street Journal. She has authored and edited award-winning, best-selling books in eight translations and was the San Francisco Chronicle's sex columnist. Her conference appearances include ETech, LeWeb, CCC, and the Forbes Brand Leadership Conference, plus two Google Tech Talks. The London Times named Blue one of “40 bloggers who really count.” Ms. Blue is the author of The Smart Girl's Guide to Privacy. Find out more about her work in writing, sexuality, security, and privacy on her Patreon.