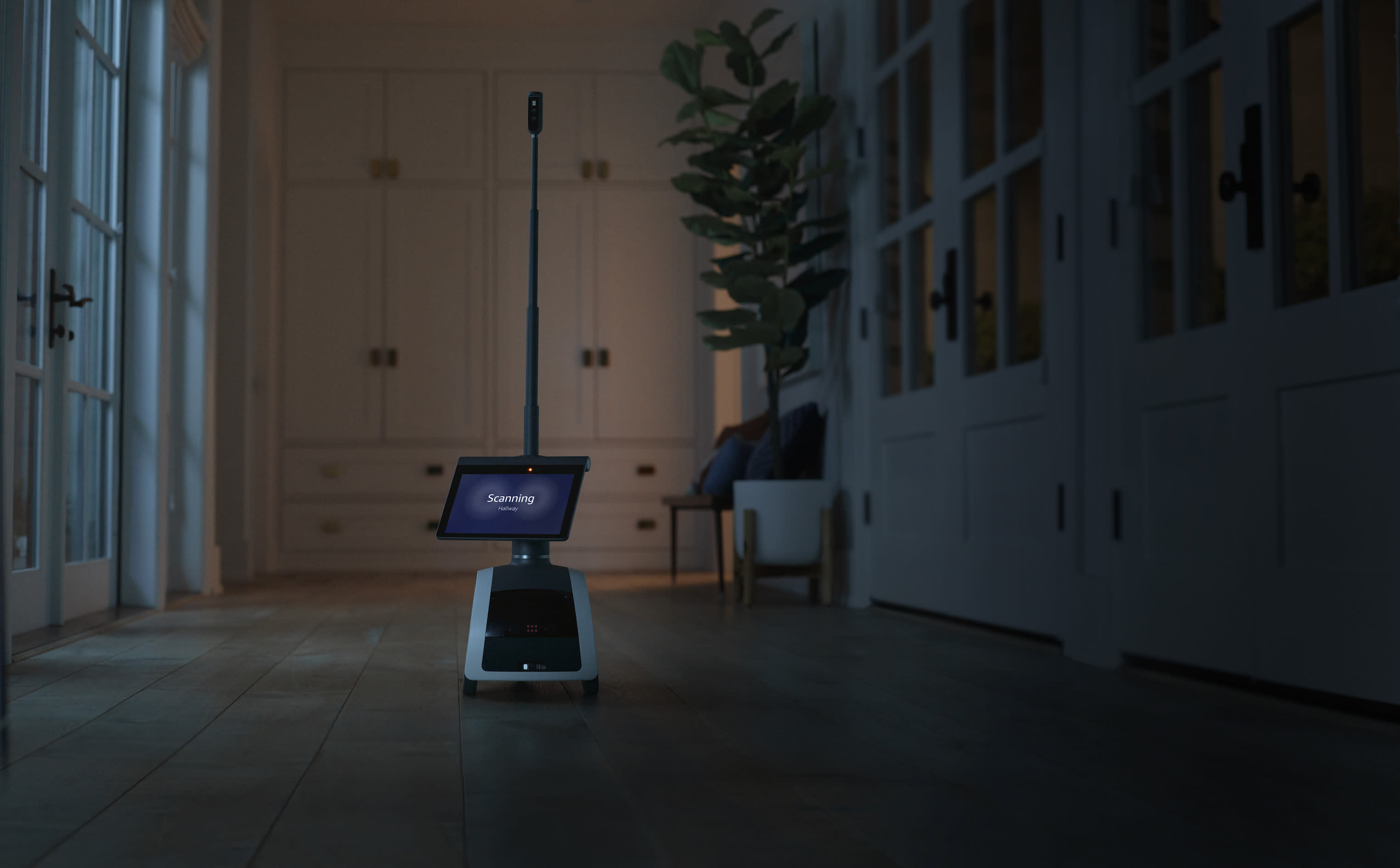 Amazon is turning into a personal security company

Half of the announcements out of Amazon's big 2021 showcase were directly related to home security, including the wildest reveal of the day, a $1,000 robot that can autonomously patrol your home. It's essentially a tablet on wheels, roughly the size of a small dog, with cameras that allow it to detect anomalies in the house, record video, and send alerts to your phone. It also connects with Ring, Amazon's popular personal security system, allowing the robot to roll around on its own and proactively investigate odd events while the homeowners are away. Its name is Astro. Yes, it has eyes.

Astro was the cap to an hour-long event that started with kids' toys and health services, and ended in a stream of dystopian police-state devices, each presented with an Amazon-branded smile. There was the smart thermostat, the interactive camera for kids, and Amazon's own version of the Fitbit, followed by the Ring Always Home Cam, Ring Alarm Pro, Ring Virtual Security Guard, Blink Video Doorbell and floodlight cameras, and finally, Astro, the robot with an extendable arm that can be set to record every inch of your house without any additional input. Add a layer of ominous music that slowly creeps up in volume, and Amazon's show was an instant episode of Black Mirror.

In Amazon's vision of the future, homeowners are constantly watching their security cameras, tracking delivery people and spying on their dogs, heavily relying on the Ring ecosystem the entire time. Astro and the Ring Always Home Cam, Amazon's autonomous security drone, are the company's most visually striking devices, tapping into science-fiction dreams of robot butlers and AI-powered pets. They move on their own and stream data directly to the homeowner at any time, satiating the persistent breed of home-security paranoia generated by neighborhoods of curbside cameras and Nextdoor threads.

While the robots are the face of Amazon's in-home security business, Ring is the backbone. Ring has been leading the home-security charge in the United States since 2018, selling 1.4 million doorbells in 2020 alone and cornering 18 percent of the market overall. Unfortunately, Amazon has proven to be a near-sighted steward of this massive, unregulated residential surveillance system.

Since 2018, Ring has signed agreements with more than 2,000 police departments across the US, providing authorities with access to recordings from residential cameras, often without warrants and according to the company's own parameters. In May and June 2020, for instance, the Los Angeles Police Department used the Ring ecosystem to request footage of Black Lives Matter protests from residential doorbell cameras, and has redacted FOIA statements to censor how much footage was requested and in relation to which incidents. That's a huge red flag, according to activist groups like the Electronic Frontier Foundation.

"If police request hours of footage on either side of a specific incident, they may receive hours of people engaging in First Amendment protected activities with a vague hope that a camera may have captured illegal activity at some point," the EFF said in February. The report continued, "Technologies like Ring have the potential to provide the police with video footage covering nearly every inch of an entire neighborhood. This poses an incredible risk to First Amendment rights. People are less likely to exercise their right to political speech, protest, and assembly if they know that police can acquire and retain footage of them. This creates risks of retribution or reprisal, especially at protests against police violence. Ring cameras, ubiquitous in many neighborhoods, create the possibility that if enough people share footage with police, authorities are able to follow protestors’ movements, block by block."

In a statement provided after publishing, Ring said "all requests are limited to a timeframe of up to 12 hours," and footage must be between "0.025 and 0.5 square miles" from an alleged crime.

As the number of police departments with Amazon contracts has skyrocketed, authorities themselves have been pushing Ring devices on the citizens they serve, using materials prepared by the company and earning incentives for getting folks to download Ring's Neighbors app. Amazon has effectively turned the US police force into its own mini marketing squad, blurring the lines between public safety and private-company loyalty.

On top of problematic police partnerships, the Ring ecosystem is filled with unchecked bias. A 2019 study by Motherboard found people of color were disproportionately labeled as "suspicious" in the Neighbors app, a phenomenon that feeds into racism and hyper-vigilance, creating less-safe environments overall.

Ring has taken steps to address some of these issues, such as changing the wording in the Neighbors app from "suspicious" to "unexpected activity." Additionally, police will no longer be able to send bulk emails to Ring users who might have footage they want — instead, there's a portal on Neighbors where they can request footage publicly. Of course, these aren't solutions. Changing a word does nothing to temper the breeding ground of suspicion and racism inherent in the Neighbors app, and making police requests public doesn't stop them from happening, warrantless and with broad boundaries that are still determined by Amazon, a massive ecommerce company.

"The network is predicated on perpetuating irrational fear of neighborhood crime, often yielding disproportionate scrutiny against people of color, all for the purposes of selling more cameras," the EFF said in June. "Ring does so through police partnerships, which now encompass 1 in every 10 police departments in the United States. At their core, these partnerships facilitate bulk requests from police officers to Ring customers for their camera footage, built on a growing Ring surveillance network of millions of public-facing cameras. EFF adamantly opposes these Ring-police partnerships and advocates for their dissolution."

As Amazon continues to build out its Ring ecosystem, police partnerships intact, it's clear that the company is not focused on rebuilding public policy, reducing crime or eliminating everyday racism. Amazon is focused on selling Ring cameras; Amazon is focused on making money. Personally, that doesn't make me feel safe.

Update 10/1: This story was modified after publishing with information from Ring on law enforcement requests for footage, and to clarify Astro's recording behavior.

All products recommended by Engadget are selected by our editorial team, independent of our parent company. Some of our stories include affiliate links. If you buy something through one of these links, we may earn an affiliate commission. All prices are correct at the time of publishing.
View All Comments
Amazon is turning into a personal security company