After focusing on mid-range and entry-level graphics for years now, AMD is taking a step back into high-end graphics cards with the Radeon RX 6800XT. It’s the company’s first RDNA 2 video card for PCs, though that architecture will also appear in the Xbox Series X and PlayStation 5. At $649, the Radeon RX 6800XT is meant to compete with NVIDIA’s powerful $699 RTX 3080.

But that’s not all: AMD also announced a slightly cheaper $579 Radeon RX 6800, which will launch alongside the 6800XT on November 18th. And of course, the company couldn’t help but reveal a droolworthy super-powerful GPU, the $999 Radeon 6900XT, which arrives December 8th.

So what’s so special about these new GPUs? AMD says it managed to increase the performance-per-watt of the RDNA 2 cards by 30 percent, compared to last year’s GPUs. And, not surprisingly, you can expect around twice the 4K performance compared to the Radeon 5700 XT (which was just a beefed up mid-range card). The RX 6800XT offers 72 compute units, a 2,015MHz game clock, and 16GB of GDDR6 memory. It managed to beat out NVIDIA’s RTX 3080 in many 4K titles, including Call of Duty: Modern Warfare and Battlefield V. That’s particularly impressive since it’s running with lower power usage. And even in instances where it lagged behind, like The Division 2, it didn’t seem to be far off from NVIDIA’s card.

AMD is also introducing “Rage Mode,” with its new cards, which is essentially one-click overclocking to boost performance. And if you’ve got a Ryzen 5000 series CPU, you can also take advantage of “Smart Access Memory” to give the GPU better memory performance with the CPU. It’ll be interesting to see just how much of a leg up that gives AMD systems, versus putting a Radeon GPU in an Intel machine. 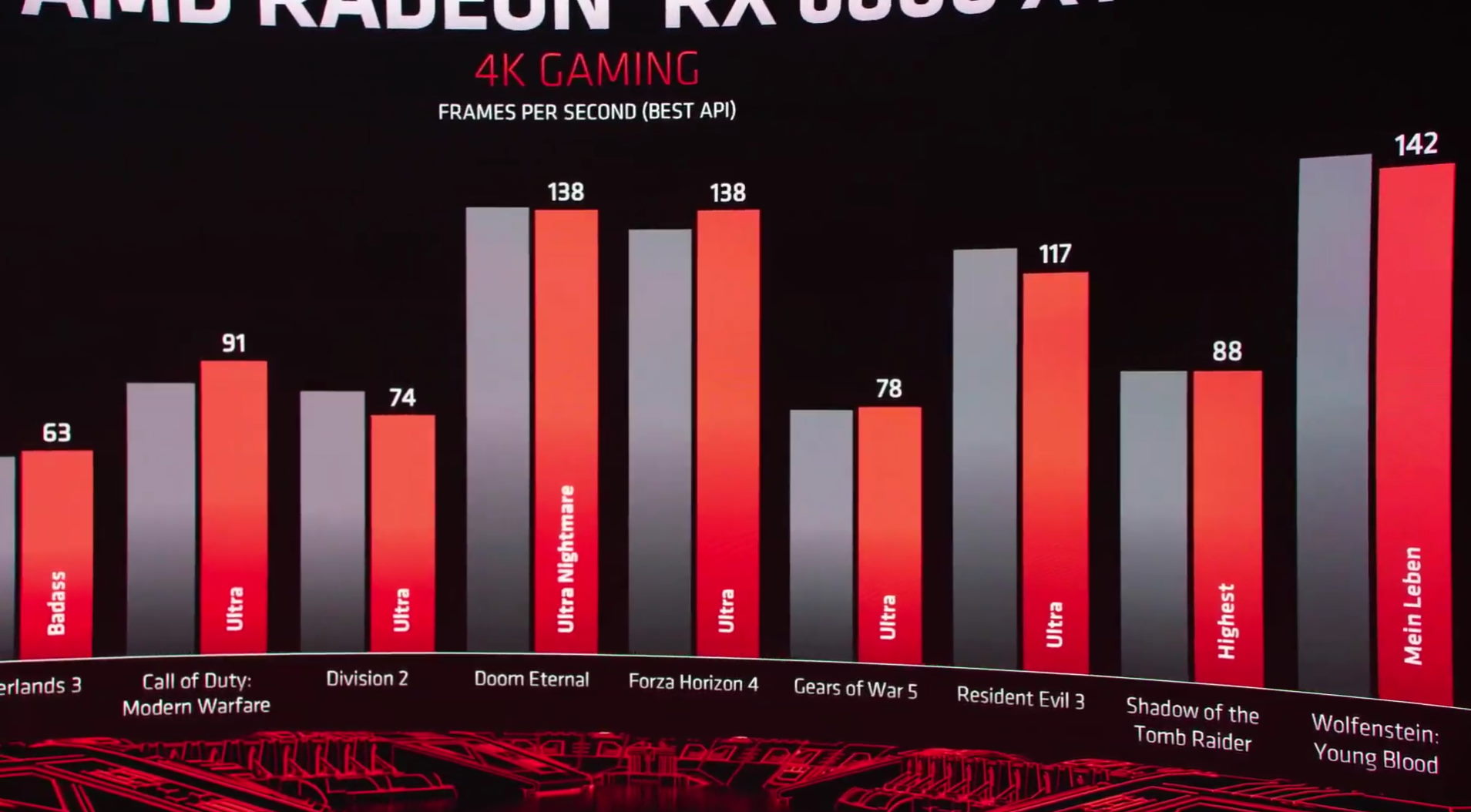 And if you were wondering, yes, the RDNA 2 GPUs offer hardware accelerated ray tracing. That’s something AMD didn’t talk much about last year — and even during this launch presentation, it didn’t dwell on much — but it finally puts the company on competitive footing with NVIDIA’s RTX cards. But of course, we knew ray tracing was coming to RDNA 2 for a while now, especially since we’ve seen it demonstrated on next-gen consoles.

As usual, the Radeon RX 6800 will be a slightly stripped down and more affordable card. The RX 6900 XT is more of a surprise, with 80 compute units instead of the 6800 XT’s 72. What’s a bit odd is that it’s running the same clock speeds and memory as the 6800 XT, so I’m interested to see how AMD is beefing up the more expensive card. On paper, it’s not an obvious improvement like NVIDIA’s insane RTX 3090. 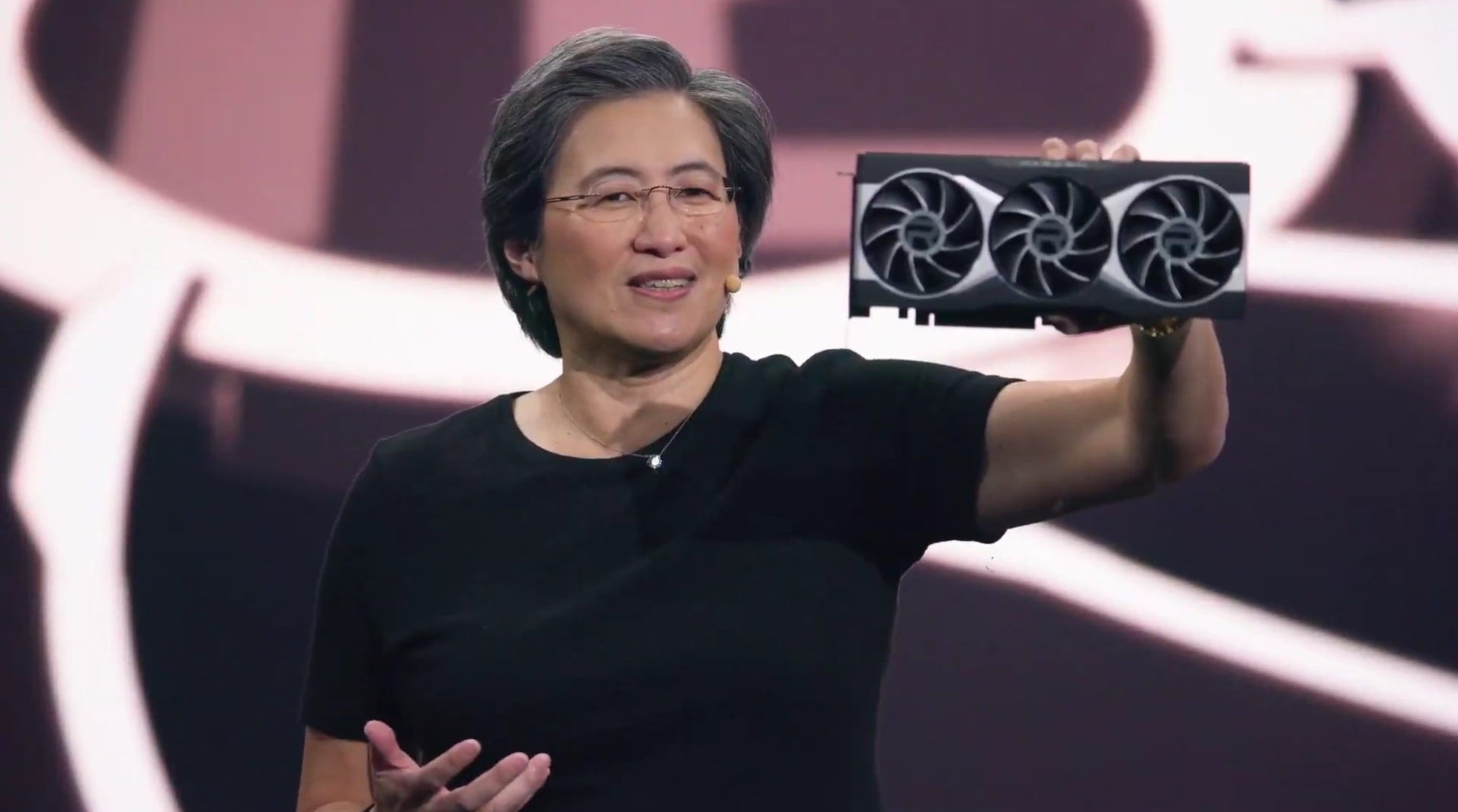 So there you have it. AMD finally has some powerful 4K gaming GPUs coming. And combined with its intriguing Zen 3 CPUs, they should make for a killer gaming rig. Meanwhile, Intel seems to be lagging behind, after announcing that it will delay its 7nm chips until 2022. And even though its upcoming Rocket Lake CPUs could be compelling for gamers, it still seems like Intel is playing catch-up since those are its first PCIe 4.0 chips.