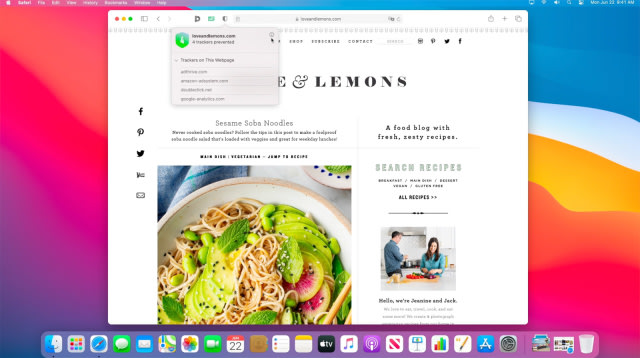 When Apple detailed macOS Big Sur earlier this week, it spent a lot of time talking about how it redesigned the desktop operating system to make it look more modern. The company also touched on upcoming enhancements to Safari, such as faster webpage loading times and enhanced privacy monitoring. But the one feature that will likely mean the most for Safari users is Apple's take on the WebExtensions API. The move promises to significantly increase the number and variety of plug-ins you'll be able to install if you use Safari as your primary web browser. And we now have a better idea of how they'll work thanks to a WWDC session spotted by TechCrunch.

From a developer standpoint, the most significant difference between Safari's new web extensions and the content blocking, share and app extensions Apple currently supports is that they can be programmed using JavaScript, HTML and CSS. Developers don't need to go out of their way to learn Objective-C or Swift, which are of limited use outside of Apple's ecosystem. What's more, developers can take their existing Chrome, Firefox or Edge extensions and port them to Safari using a converter Apple has created to speed up the process. As with other Safari plug-ins, users will be able to find and download the new web-based ones through the App Store.

Since some extensions ask for multiple permissions before they run, Apple will notify users of the privacy risks of using one before they have the chance to activate it. You'll also be able to restrict an extension to run on either only some websites or a single active tab. Similarly, you can limit how long an extension runs to a single day.

For all its strengths, its less diverse plug-in ecosystem has been a consistent weakness of Safari. It's one of the reasons some macOS users switch to browsers like Chrome and Brave. The upcoming change could give Mac users more incentive to stay with Apple's browser.

In this article: apple, wwdc2020, safari, browser, internet, personal computing, chrome, edge, Extensions, news, gear
All products recommended by Engadget are selected by our editorial team, independent of our parent company. Some of our stories include affiliate links. If you buy something through one of these links, we may earn an affiliate commission.